With forms of police crowd control such as worrying as tear gas, pepper spray, and rubber bullets - not to mention batons, boots, and fists - why spend time covering long range acoustic devices? For me, the answer came when I talked to a Lakota grandmother at a camp of water protectors on a warm late August evening on the Cheyenne River Reservation in northern South Dakota. Despite this being many months after the events of Standing Rock, when I asked her about experience at the protest and if she had noticed any lingering side effects from the police violence there, tears immediately began to spring forth.

One of the things she focused on in particular were the issues stemming from the LRAD. She described to me intense balance issues, severe ear ringing, splitting headaches, and in some cases, vomiting. She told me that while younger protesters were mostly recovered after a week or two, some of the elderly were still having issues with tinnitus. Her confusion and pain were palpable, and there was very little to be done, especially with the conditions on the Reservation - some of the damage done by the LRAD appeared to have been irreversible.

This is part of the reason MuckRock has been filing requests around these devices in an effort to learn about policies, usage, the variety of different devices, and the price tags involved with these high powered acoustic sound cannons. So far, we have managed to get some particularly illuminating material from Chicago, Houston, and the Massachusetts State Police. 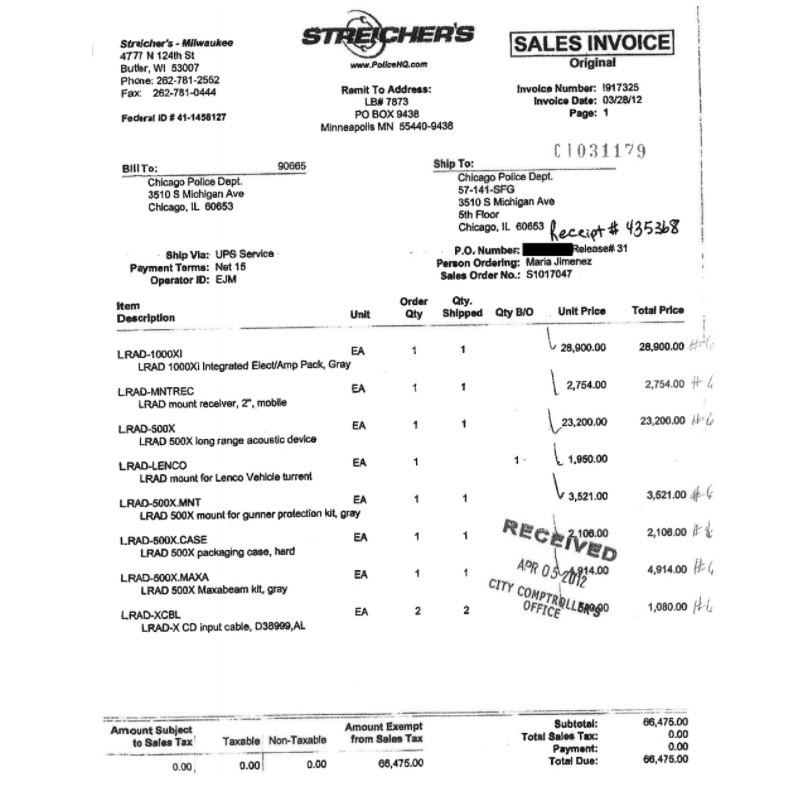 First off, let’s look at the different models of LRAD that police are buying. CPD, Las Vegas Metropolitan Police Department, and the Pittsburgh Police Bureau have all acquired both the LRAD 100X and the 500X. The 500X is about ten decibels higher than the 100X, at 150 db continuous output with a peak of 154 db. The Charlotte-Mecklenburg Police Department has an 1000 (maximum continuous output of 149 db) and the MSP have a Lenco Bearcat armored vehicle with an unspecified LRAD model attached. HPD were gifted four LRAD 100X’s from the Houston Police Foundation. 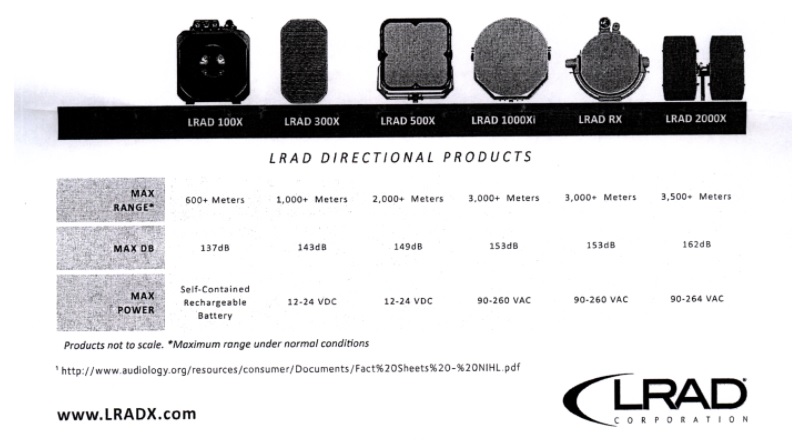 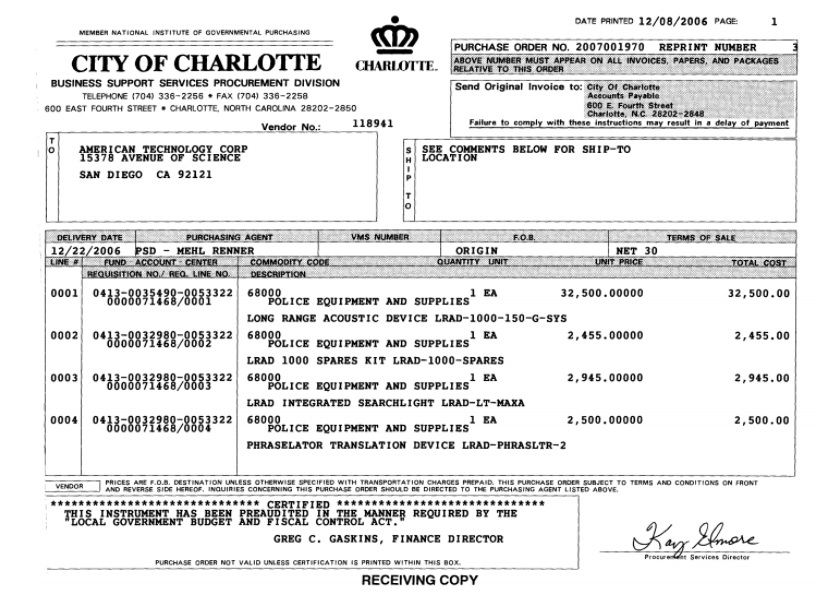 Now, let’s see what the American Hearing Research Organization has to say about equivalent decibel outputs to these LRAD models. It should be stated here that the AHRO definitively says any noise over 140 db experienced without hearing protection is not advisable for any length of time. Check out the below table taken off the AHRO website.

140 db is equivalent to a jet engine. It causes pain and potential exposure injuries to unprotected ears. Most of the LRAD models featured above go a full ten db higher. And that is just the continuous output, not the highest it may reach, which is in the low ‘150s. Disturbingly, none of these agencies, save the MSP gave us anything like a real policy for operating these devices - which means no hard rules on how long they can expose a crowd or individual to the device, or whether it is acceptable to run it at full output. The one LRAD specific use of force policy we did get from MSP does give some helpful guidelines, but it could certainly be a lot more strict and specific. 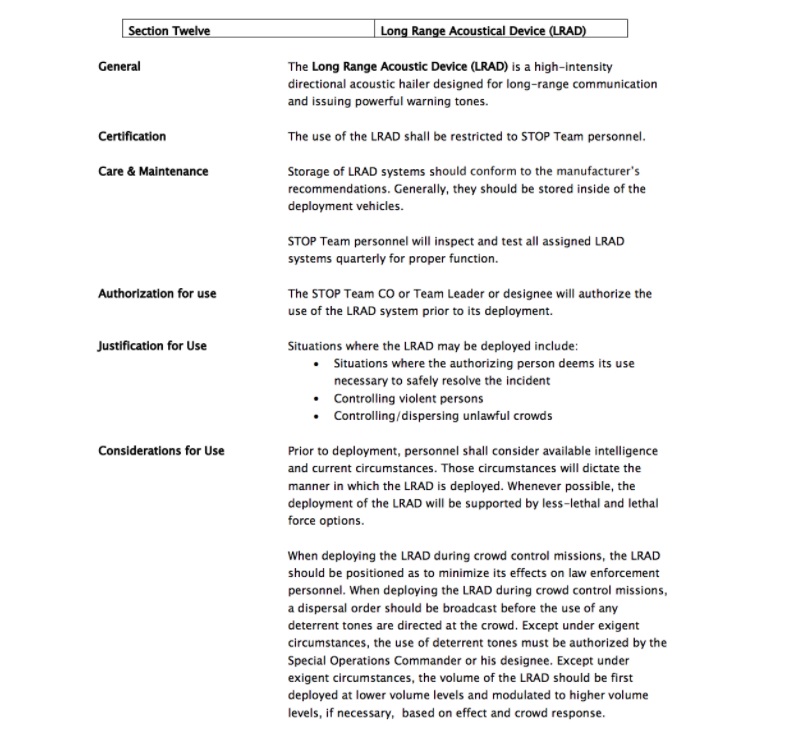 They do include a direction to start off at lower volumes, but then give discretion to the operating officers to decide whether they need to put the sound cannon on full blast if the crowd does not comply within a vague time frame. Yet it is also encouraging that the operators have to get clearance before sounding the “deterrent tones” which is what they euphemistically call the jet engine-like waves of sound that emanate from these small but powerful devices. But perhaps most interesting is the requirement that medical treatment must be made available to any persons that the device is deployed on. This appears to contradict an official LRAD company informational packet from the HPD release: 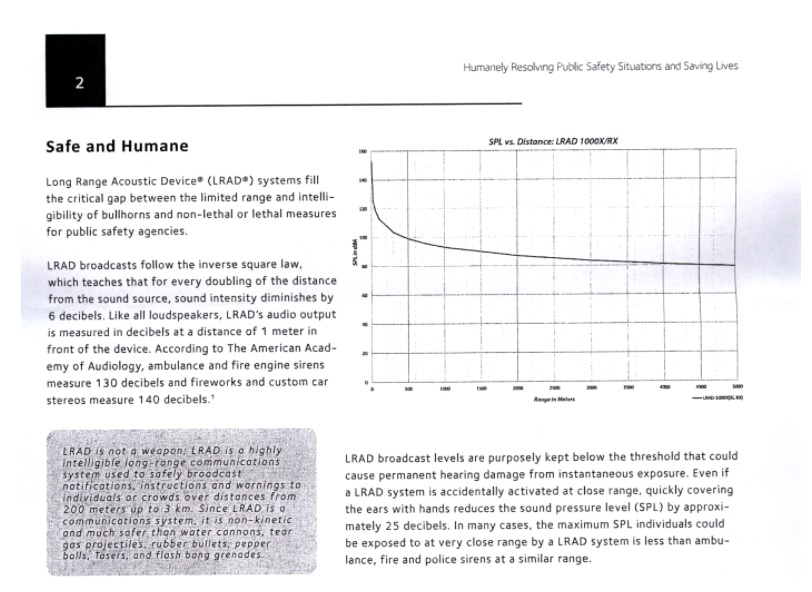 While the company maintains that covering your ears with your hands is sufficient protection from the device, that “broadcast levels are purposely kept below the threshold that could cause permanent hearing damage from instantaneous exposure” (keeping in mind that these devices are not used for merely a few seconds at a time, and that the broadcast levels are different than the deterrent tones) and finally, that the LRAD is definitely NOT a weapon, it’s interesting to note that MSP have chosen to make it mandatory that medical treatment is made available to those exposed to its effects. As for their claim that the LRAD is “safe and humane,” well, I’d be interested to hear what a certain Lakota grandmother has to say about that.

We’ll be reporting further as more records are released. In the meantime, read HPD’s release is embedded below or on the request page, and the rest of the recompleted responses here.

Image by as FlyingCoyote and is licensed under CC BY-ND 2.0

Curtis Waltman sent this request to the Charlotte-Mecklenburg Police Department of Charlotte, NC

Curtis Waltman sent this request to the Houston Police Department of Houston, TX

Curtis Waltman sent this request to the Pittsburgh Bureau of Police of Pittsburgh, PA