After a wait of nearly ten months, MuckRock has finally received documents from the D.C. Metropolitan Police Department regarding their response to the protests surrounding President Donald Trump’s inauguration early this year. Surprisingly, while we didn’t receive any records related to the J20 protests, we did receive documents relating to January 21st’s Women’s March, which in Washington D.C. alone attracted by conservative estimates between 450,000 and 500,000 people. While it was the largest protest in the city since the anti-Vietnam War protests of the ’60s and ’70s, no arrests were made. 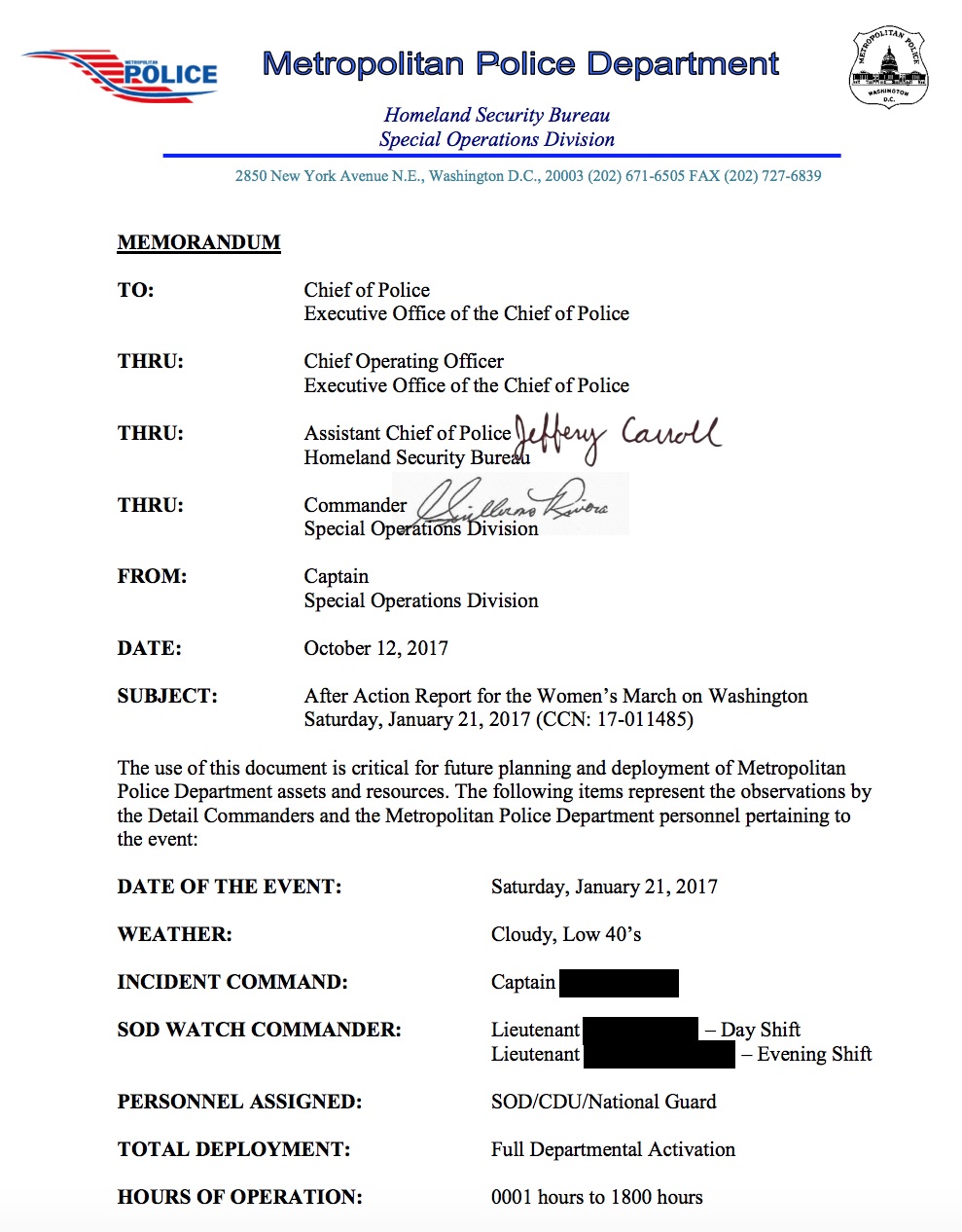 The After-Action Report provided by the DCMPD, under the header “Improvements,” contains the information that the department utilized both a D.C. National Guard Jump Team, and a Long Range Acoustical Device, better known as an LRAD. The LRAD was used “to assist in instructing the crowd flows on continuing to flow away from the entrances of the stations.” 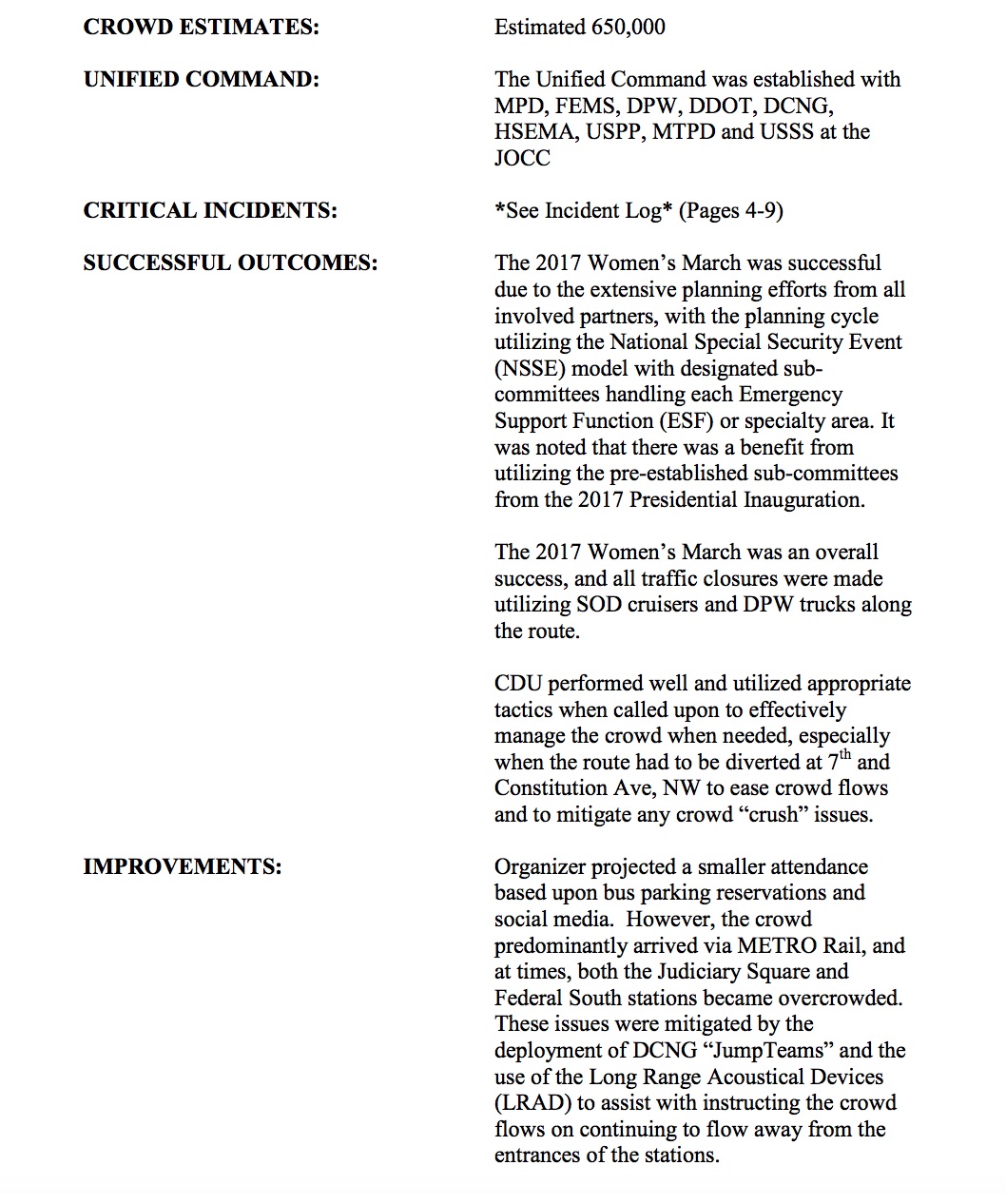 Since the first documented use of an LRAD sound cannon on protesters by Pittsburgh Police during the 2009 G20 summit, LRAD use by police against activists appears to be on the rise. The Pittsburgh Police Bureau used it again in 2011 during the Super Bowl, the New York Police Department has used it several times including the Eric Garner protests and during Occupy, the Oakland Police Department also used it against Occupy protesters, and more recently and perhaps most prominently, an LRAD was deployed during the Ferguson unrest and the Standing Rock protests.

There are various models of LRAD, with military grade versions that can send voice communications up to 5.5 miles away, and slightly less powerful versions like the LRAD 500X or 300X which are what police departments generally use. All can produce a sound somewhat akin to a high-powered car alarm that can cause intense headaches, nausea, loss of balance, and potentially permanent hearing loss.

The National Institutes of Health says that the risk of hearing loss can begin at as low as 85 dB. The higher the decibels, the higher the chances of permanent hearing damage - pain from sustained sound begins at 120 dB, and at 130 dB, permanent hearing loss is inevitable. Even low-powered models of LRAD’s can easily go up to 140 dB, with most police models capable of reaching at least 152 dB.

In a Motherboard piece written just after Ferguson, protesters describe the experience of being on the receiving end of this sound cannon. Photojournalist Anika Edrei told Motherboard reporter Alex Pasternack, “It was really loud - I could hear it through my fingers.” She continued,

“For the first week, I had a migraine, and just a lot of facial pressure,” she said. “Since the LRAD incident, I’ve been pretty freaked out about going back,” she added. “I’m worried about what damage it caused and it could cause if I went out there again.”

“It feels like your eardrums are beating out of your head. It makes the side of your body that you’ve been hit on feel numb and that your sinuses are inflamed. I felt like I had blood coming out of my orifices. I heard the ringing for about a week.”

DCMPD refused all comment on the subject, so we do not know whether the department has their own LRAD (like the NYPD, which purchased one for roughly around $35,000), or whether it was borrowed from another agency, nor do we have any information on usage or training guidelines. We hope a public records request can uncover some of the answers.

What we do know is that this won’t be the last time the DCMPD plans on deploying its LRAD. If you look at the opening page of the After-Action Report embedded below, it includes the line, “The use of this document is critical for future planning and deployment of Metropolitan Police Department assets and resources.” Read the full records embedded below, or on the request page.

Image by Ted Eytan via Wikimedia Commons and licensed under Creative Commons BY-SA 2.0.

Curtis Waltman sent this request to the Metropolitan Police Department of Washington, DC

Curtis Waltman sent this request to the Metropolitan Police Department of Washington, DC