A presidential transition generates a lot of paperwork, even when no transition is happening.

Even though the General Services Administration (GSA) did not formally acknowledge the win of new President-elect Joe Biden until yesterday, the transition process actually began months before Election Day. It’s necessary preparation to navigate the precarious period when power (potentially) changes hands and the country is particularly vulnerable to external threats.

This year, the COVID-19 pandemic is the omnipresent force threatening every aspect of American life, and the smooth hand-off of response programs like Operation Warp Speed could have a measurable impact on citizens’ lives.

Now that the GSA has acknowledged the new incoming administration, a whole series of funding and actions begin, including money for transition activities, sharing of national security information, and the opening of communication channels between incoming and outgoing staff. 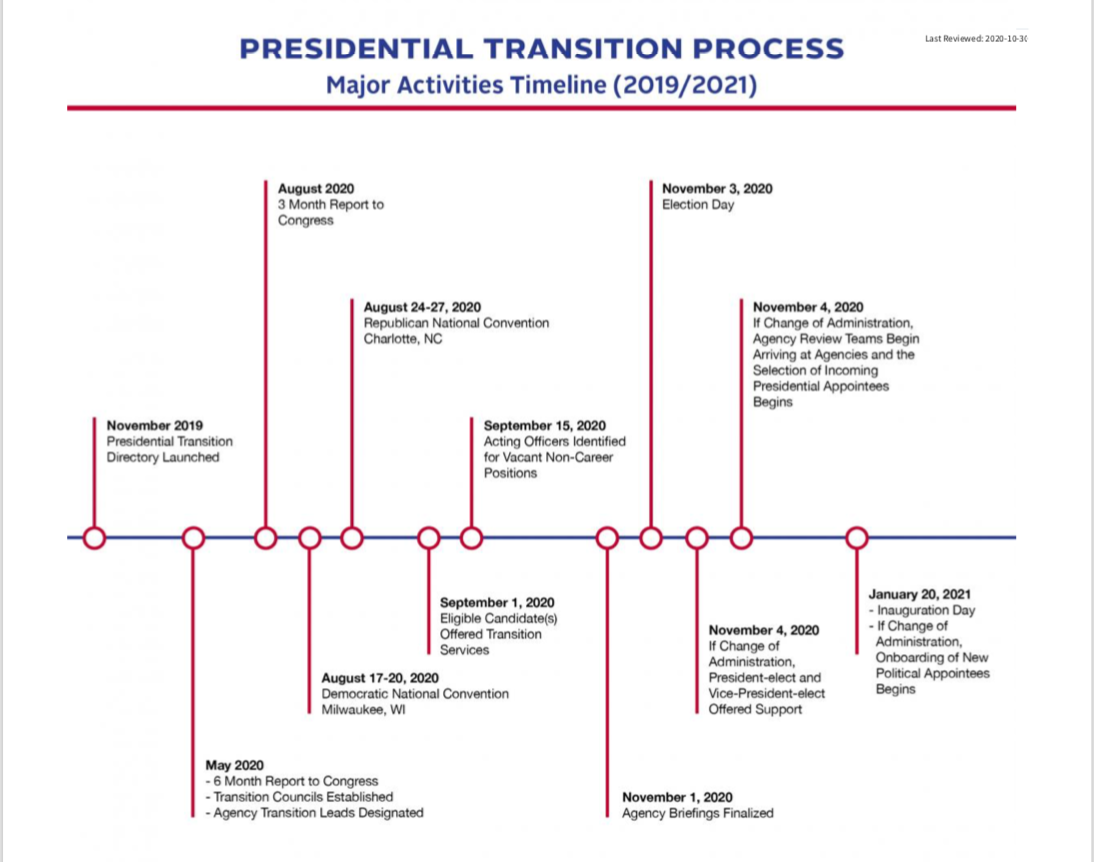 The bureaucratic wheels have continued to churn out plenty of records and plans, and federal employees are aware that records retention rules still apply. In general, the records of the federal government will stay subject to the Freedom of Information Act, and President Donald Trump’s records will be acquisitioned by the National Archives and Records Administration.

We’ve broken down some highlights of the legal presidential transition process and where you can look for your next bit of #FOInspiration.

REPORTING AND OTHER REQUIREMENTS

The Presidential Transition Act (PTA) of 1963 and subsequent legislation and guidance outline deadlines and requirements for agencies in an election year, some occurring far in advance of a presidential decision, and others that don’t go into effect until a new President-elect is recognized as the winner by the GSA.

Check out the Congressional Research Service’s overview of the Presidential Transition Act, released earlier this month, to learn more about the different requirements put in place by the PRA.

A recent report by the Finance Committee described violations of these expectations experienced by the Trump administration, whose private materials shared with the GSA were copied and shared with the Federal Bureau of Investigation during the Mueller investigation despite the transition MOU specifying these records were the private property of the transition team and would not be retained.

In a 2000 update, the GSA Administrator was given authority to consult with presidential candidates prior to the general election “to develop a systems architecture plan for computer and communication systems, a transition directory, and orientation services for new Presidential appointees.”

As part of this bill Intelligence Reform and Terrorism Prevention Act (IRTPA) of 2004, outgoing Executive Branch officials are supposed to prepare a “detailed classified, compartmented summary…of specific operational threats to national security, major military or covert operations, and pending decisions on possible uses of military force.” This is supposed to go to the President-elect as soon as possible after the election.

“Necessary background investigations and eligibility determinations to permit appropriate prospective transition team members to have access to classified information” are supposed to be done by the day after the general election, and “responsible agencies [must] undertake and complete as expeditiously as possible the background investigations necessary to provide appropriate security clearances to the individuals who are candidates as described in the act before the date of the inauguration.”

During President Obama’s first term, the Pre-Election Presidential Transition Act of 2010 (P.L. 111-283) authorized GSA to provide office space and other support services to eligible candidates before the general election. These include allowing each eligible candidate to submit, before the general election, security clearance requests for “prospective transition team members who will have a need for access to classified information” in the course of their work in the hope these clearances can be completed by the day after the election.

In the months leading up to the election, both the White House and the executive branch agencies need to prepare for the potential effects on staffing and administrative processes that a new presidential administration can have.

The WHTCC is supposed to provide guidance to the Executive Branch regarding preparations for the potential Presidential transition. These include succession planning and preparation of briefing materials; facilitating communication and information sharing between the transition representatives of the eligible candidate(s) and senior employees in agencies and the Executive Office of the President (EOP); and preparing and hosting interagency emergency preparedness and response exercises.

The ATDC begins in May to meet “on a regular basis as necessary.” It’s composed of individuals like GSA Federal Transition Coordinator Mary Gilbert, Office of Management and Budget (OMB) officials, senior career officials as representatives of specified federal agencies, and representatives of the eligible presidential candidates. It provides guidance to agencies in gathering briefing materials and information relating to the Presidential transition that may be requested by eligible candidates. These should be prepared by November 1 of the election year. For example, here is the Department of Energy’s transition guide from 2016.

In May, the Trump administration confirmed that it had created the necessary groups and provided an update on their progress. The 2020 Presidential Transition Activities Progress Report gives additional information on the Office of Government Ethics (OGE) and other agencies training and transitioning major parts of federal government authority.

Each agency is supposed to:

EMPLOYEES OF INTEREST: THE PLUM BOOK

The vast majority of the federal government’s 2.1 million people-plus workforce aren’t presidential appointees and don’t hold positions dependent on the support of the administration. The Plum Book is a directory of the more than 9,000 that do.

Since President Eisenhower’s administration, the Plum Book has been compiled as a way for the incoming president to get a handle on what positions he or she can fill. It can also be used by the curious public to identify the positions occupied by political appointees at each federal agency. It’s alternately published by the Senate Committee on Homeland Security and Governmental Affairs and House Committee on Government Reform after each general election, though a Senate bill introduced over the summer proposes the directory be moved entirely online in the next few years.

There are a lot of other resources that can help you better understand the presidential transition process. We’ve included a few of them here.

If you have others we should add or more suggestions for #FOIAFodder, please let us know.

Image via the White House and in the public domain.