A version of this article appears on Glomar Disclosure

The 57 page report begins with a surprising assertion – the Justice Department disagreed with everyone about the mail opening program being illegal. According to the Justice Department, “it would be mistaken to suppose that it was always clearly perceived that the particular mail opening programs of the CIA were obviously illegal.” Saying that they disagreed with everyone is not hyperbole – even CIA admitted that the programs were illegal. 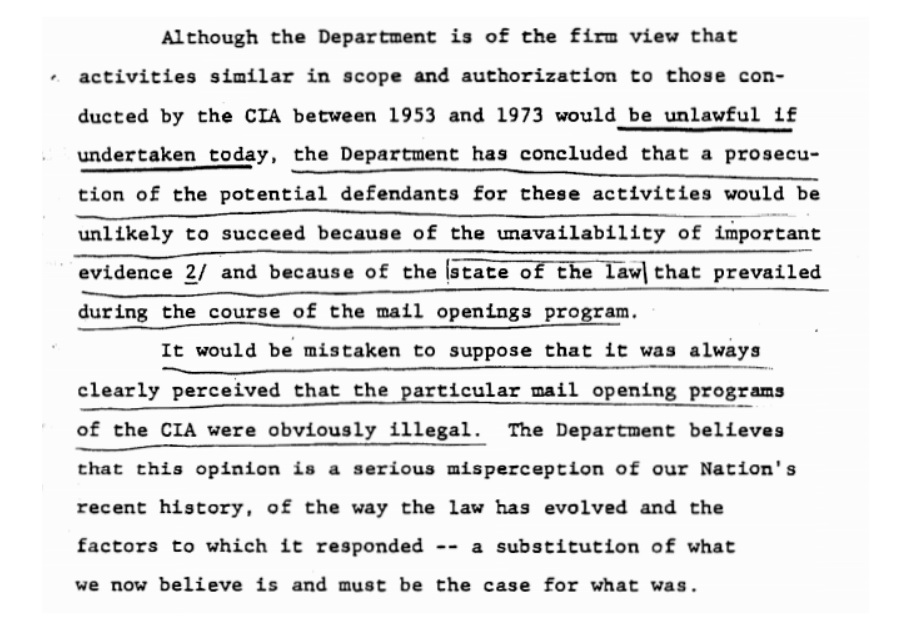 Most unforgivable is the fact that this is one of the reports cited by DoJ in their decision not to prosecute anyone at CIA. This knowledge didn’t prevent the report from calling the knowingly illegal, premeditated decisions by CIA as “good faith mistakes or reliance on the approval of government officials with apparent authority to give approval.” The best that DoJ could claim, based on this, was that some CIA officials believed the programs were legal and authorized. The same cannot, however, be said for the people running the programs or for CIA Director Helms or FBI Director Hoover. Moreover, the DoJ already had testimony from the CIA officials running the programs wherein the officers acknowledged knowing the programs were illegal. 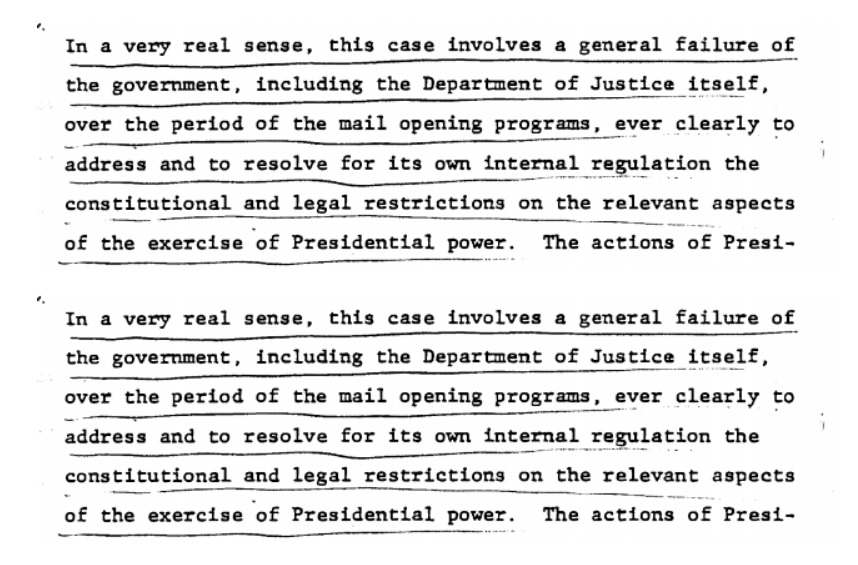 The Justice Department was very quick to claim that, with one exception, the projects were outside the five year statute of limitations that would allow them to prosecute. This statement was deliberately disingenuous and misleading on several points. Most significantly, the report acknowledges elsewhere that if any of the acts that were part of a conspiracy were committed within the last five years, then the entire project and conspiracy can be indicted.

In order to justify not prosecuting former President Nixon or the Directors of the FBI and CIA, the Justice Department had to tell an outright lie – that they had “no direct evidence which suggests that former President Nixon was ever specifically informed of the mail opening projects.” This is simply not true. From the Church Committee report, published before the Justice Department first officially decided not to prosecute anyone and referenced in this report: 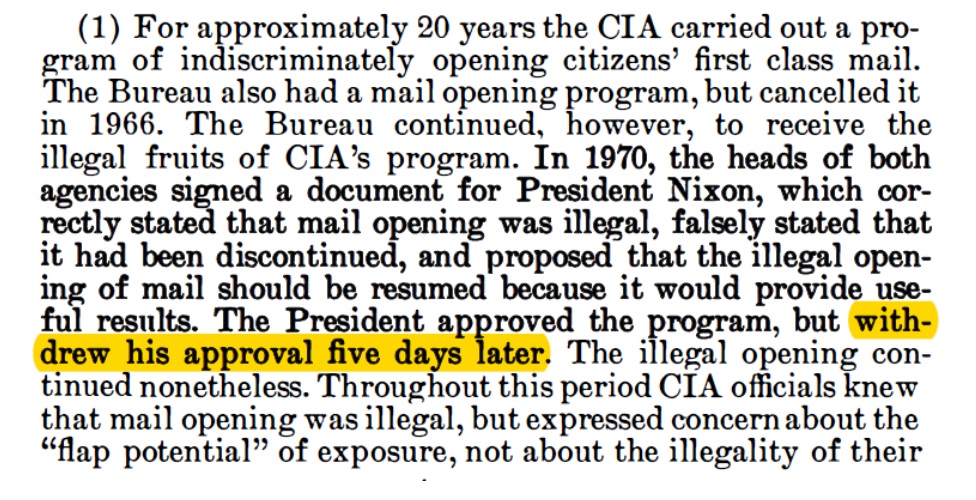 As to whether the President could even authorize such a program, the Justice Department says it best. 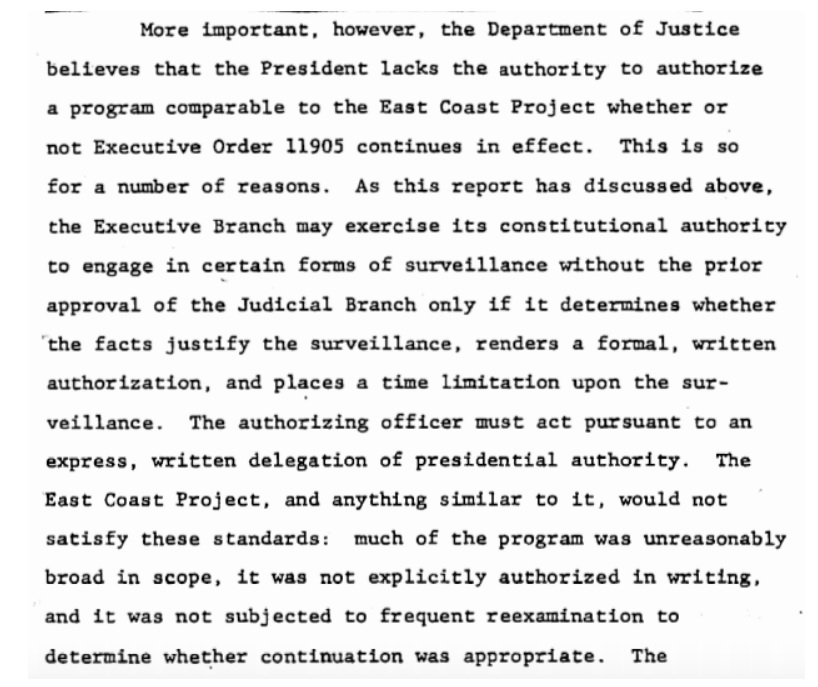 On an interesting note, the Justice Department explained that one reason the expectation of privacy is different is because customs officers are entitled to open international mail to look for pornography. 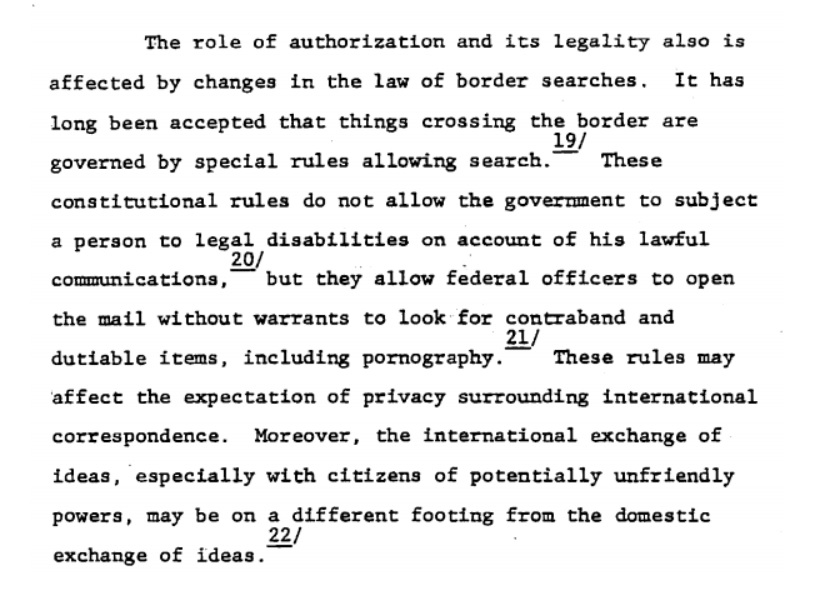 The most important quote, however, comes at the end where the Justice Department declares that the idea of free speech itself may not apply to international communications. “The international exchange of ideas, especially with citizens of potentially unfriendly powers, may be on a different footing from the domestic exchange of ideas.” Significantly, the Justice Department didn’t limit it to “unfriendly powers”, but instead used the broadest interpretation possible – “potentially unfriendly powers.”

The report ends by arguing that prosecution wouldn’t effectively ensure there wouldn’t be illegal surveillance in the future. 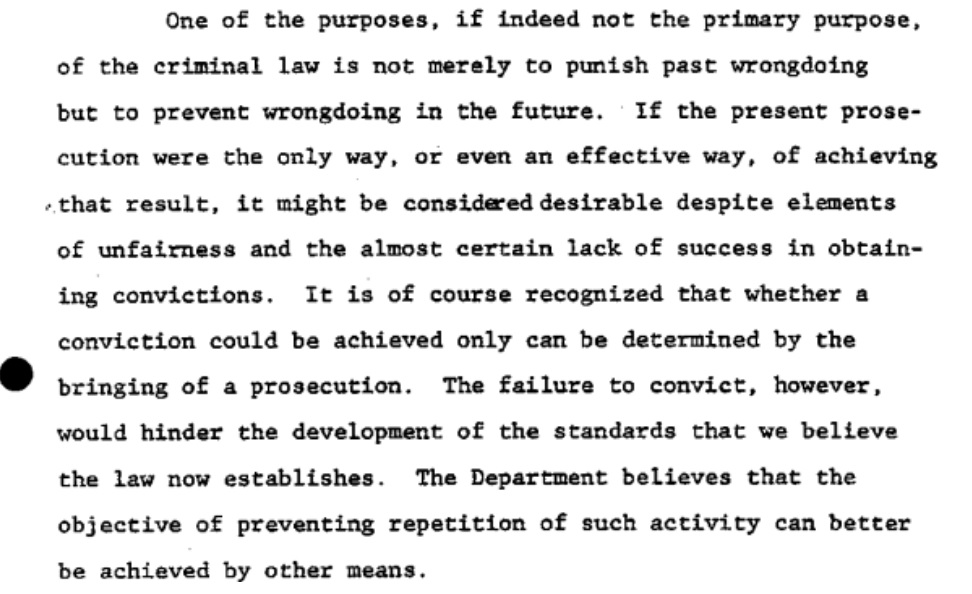 However, in light of that sentiment, one has to wonder how the NSA surveillance programs would have developed if there had been prosecutions.

Would the Patriot Act have been examined more closely? Would CIA and NSA made sure Congress was more aware of and better understood their programs? To a degree, it’s almost certain. Instead, the Justice Department opted for better legal structures and institutional changes – something we’re still struggling with nearly forty years later.

Had the Justice Department decided to prosecute, we would be looking at a very different world today. Even a failed prosecution would have sent the message that the potential for legal consequences was there. Instead, it reinforced the attitude of some in national security circles that they didn’t have to worry about the legal ramifications – only a public relations “flap.”

It’s a mistake the Justice Department seems to keep making – but it doesn’t have to.

Read the full report embedded below.