Over two decades after Danny Casolaro died while investigating the PROMIS affair, a recent FOIA response from the National Archives (NARA) confirms that it truly is “the scandal that wouldn’t die,”. Where a previous release saw only 4% of the total redacted and nothing withheld in full, this release sees 23% of the pages redacted or withheld in full. The letter from NARA suggests that the difference is due to the presence of wiretap information in the Casolaro investigation, a fact which has been previously undisclosed by the government.

NARA responded to a FOIA request from William Hamilton, the creator of the PROMIS software, for Boxes 2 and 3 of AAG John Dwyer’s files on the Inslaw case, both of which were among the boxes labelled the Casolaro Investigation (other documents from Dwyer’s files have been released and made available here). In response, NARA released 1,256 pages in full while redacting 208 pages and withholding the entirety of 180. Compared to previous releases of other documents from Dwyer’s files, the increase in the number of redactions and withholdings is significant - in February 2016, NARA responded to a Special Access Review request filed by this author by releasing the 2,164 pages out of 2,258 pages in Boxes 1 and 13. The remaining 94 pages were released with some redactions. One reason for the presence of additional redactions here is given in the letter from NARA: it concerns wiretaps.

Considering the scope of the case and the labels on the boxes, the wiretap information likely relates to one of three things. The first is the use of an otherwise wholly undisclosed wiretap used specifically in the monitoring of Casolaro, or the investigation of his death. The former would hardly be surprising given the nature of the case, though it would be significant if it had been used in the latter - the fact that the government had never disclosed their use of a wiretap, while maintaining that suicide was the only possibility they ever found plausible, would have significantly undermined that claim. It would also require a reexamination of the DOJ’s apparent-ignoring of the contradictory alibis given to them by the main suspect in Casolaro’s death.

The second likely possibility is that the wiretap was on William Hamilton, the creator of PROMIS and head of Inslaw who was in regular contact with Casolaro. According to Hamilton, he was repeatedly warned by Sean McDade of the Royal Canadian Mounted Police - known for investigating parts of the PROMIS scandal - that Hamilton’s telephone and email communications were being intercepted and monitored. Hamilton states that McDade offered this as a statement rather than an opinion. Similar to above, this would be consistent with the scope and importance of the case while still being something the government had refused to confirm.

The only likely possibility that wouldn’t add much additional information is if the wiretap related primarily to Robert Booth Nichols, who is known to have been subject to physical and electronic surveillance due to his high-level connections with organized crime. Due to his well-publicized death and the prior disclosure of the wiretap and the public disclosure of the affidavit in support of the application for it, Nichols’ is the least likely person to have had this information withheld. While the details of those wiretaps might justifiably still be withheld, they’re unlikely to have been included in these files and Robert Booth Nichols’ file was maintained by Dwyer in a separate folder. 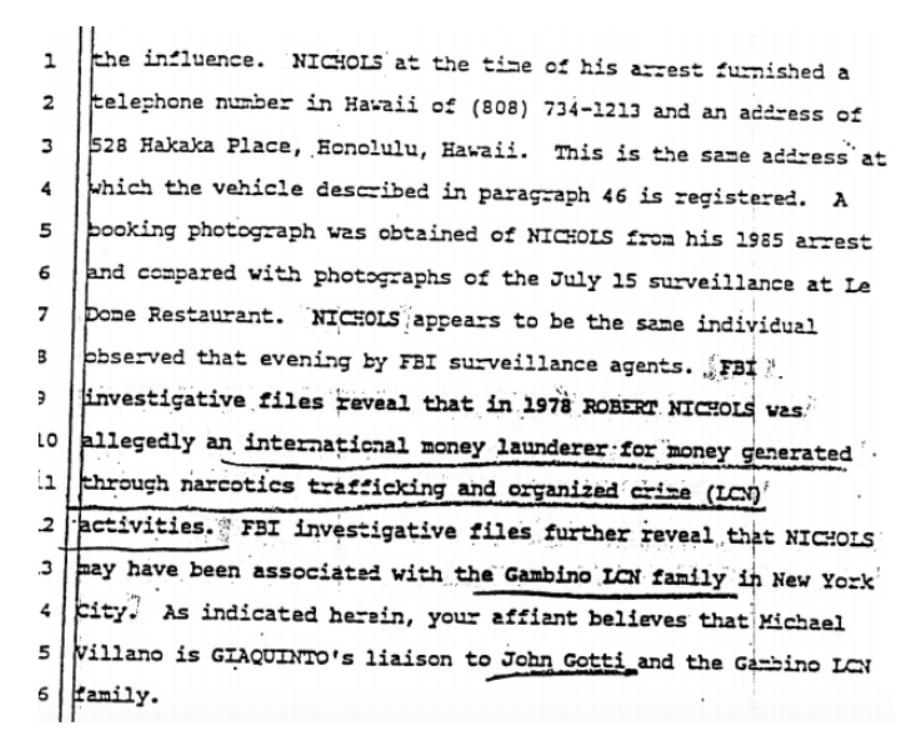 A digital copy of the file has yet to be made available, though researchers in the Maryland area may view the files at Boxes 2 and 3 of Entry P 345, RG 60, Stack 230, Row 62, Compartment 12, Shelf 3 of the College Park facility.

The response from the NARA also confirms that some of the files remain under court seal, similar to the police files on the death of Casolaro. By citing exemption b(7)(d), NARA also confirms that the Casolaro investigation involved at least one confidential informant, as the release of the information “could reasonably be expected to disclose the identities of confidential sources and information furnished by such sources.” To date, the only known confidentially informant for the FBI on Casolaro was his father, while Casolaro was investigating overlooked aspects of the then-unfolding Watergate affair.

Regardless of withholding the material, the NARA’ response confirms the use of a wiretap which was relevant to the Casolaro investigation. While the vague, the information is nevertheless significant and highlights the importance of the case and how much has yet to be revealed. The implications, discussed in part 2 of this article, of the DOJ’s confirmation of the ongoing nature of a PROMIS-related probe and a need to protect the Intelligence Community’s “sources and methods” are even more staggering.