Driven by its never-ending desire to have greater control of what information about its activities are made public, CIA drafted a SECRET report listing 126 things that the Agency could use to argue something was subject to the “sources and methods” protections. Intended to address difficulties censoring Victor Marchetti’s book on the Agency, the list was designed to be both “broad enough and specific enough” to include as much as possible. While the list has been used to help justify a number of FOIA withholdings, the list itself has been withheld … to protect the Agency’s intelligence sources and methods.

First proposed by the Policy and Plans Group, the paper was meant to serve as justification “for use in injunctive cases such as Marchetti and in Freedom of Information cases in conjunction with exemption 3 [b3] of the FOIA.” It was to “become a definition of what constitutes intelligence sources and methods.” While the concept is essentially sound, the problem with the list being the de facto definition of intelligence sources and methods emerges in some of the memos exchanged in its preparation. 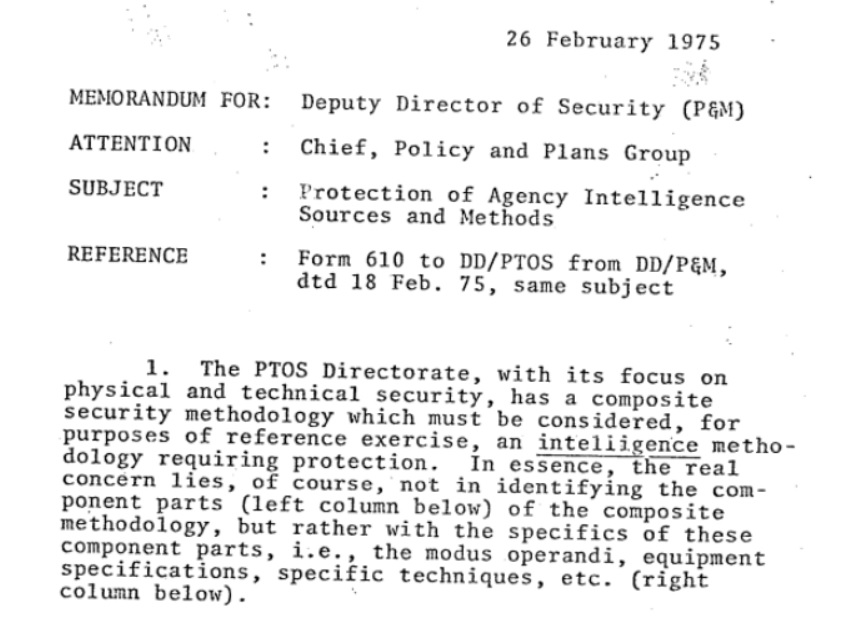 According to the office of the Policy and Plans Group, the list’s explicit purpose was to help the Agency argue that requests should be denied because the information could be considered an intelligence source or method. The proposal paper stated that when the Agency became embroiled in FOIA litigation “as it will most assuredly be”, having such a list would “be convincing to be able to argue that a request should be denied because it is … exempted from disclosure by the sources and methods provisions.” The list would act as a “prior determination” from the Director that could predate any individual FOIA request or injunction against publication.

While the list of “aspects of intelligence sources and methods” remains redacted in its entirety, we know that when it was created it consisted of 126 aspects and it was about 20 pages long. Thanks to the proposal paper, we have two sample entries that give us an idea of the type of categorical information the Agency hoped to prevent from being disclosed through FOIA or by former employees.

While the proposal cautioned against trying to include “all names of agents of the Agency,” instead an appropriate categorical exclusion would be “the name of any Agency employee, who has served, is serving or may serve under cover, the revelation of which might damage the future effectiveness of such cover arrangements.” The other example used similarly broad language regarding the identity of the Agency’s agents and assets. While this type of exclusion is both logical and difficult to argue with, it’s disconcerting that the Agency generated 126 such broad points of exclusion - some of which were not strictly not strictly intelligence sources or methods.

The proposal hoped that the list could be quickly generated, an idea which the document’s reader apparently found ridiculous. Written in the paper’s margins is a note that “they are dreaming!”

A memo produced months later, after the list had been drafted but before it was finalized or given the force of the Director’s orders, provides some additional insight into the nature of the list. According to the memo, the Agency’s philosophy had been to “include both general and specific Aspects which may have overlapping application.” The overlapping aspects and multilayered concerns meant that the Agency might have several aspects that could apply in any particular case. In these cases, it was suggested that only one aspect be cited as justification to disclose as little as possible. 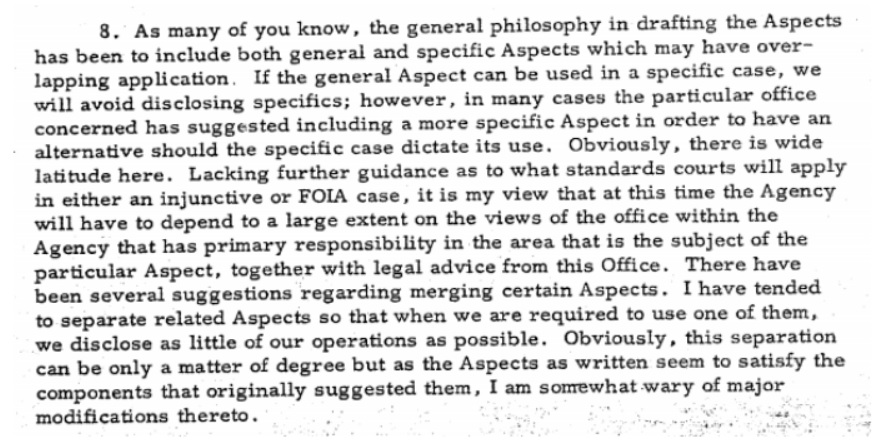 The cover to the memo adds that a lot of things on the list won’t actually need protection most of the time. Since the Agency’s goal was to be as inclusive as possible with the list, this is hardly surprising. The “tricky part”, as the Agency saw it, was drafting a regulation to use alongside the list that would give the Agency complete “discretion and yet will still hold up in court.” 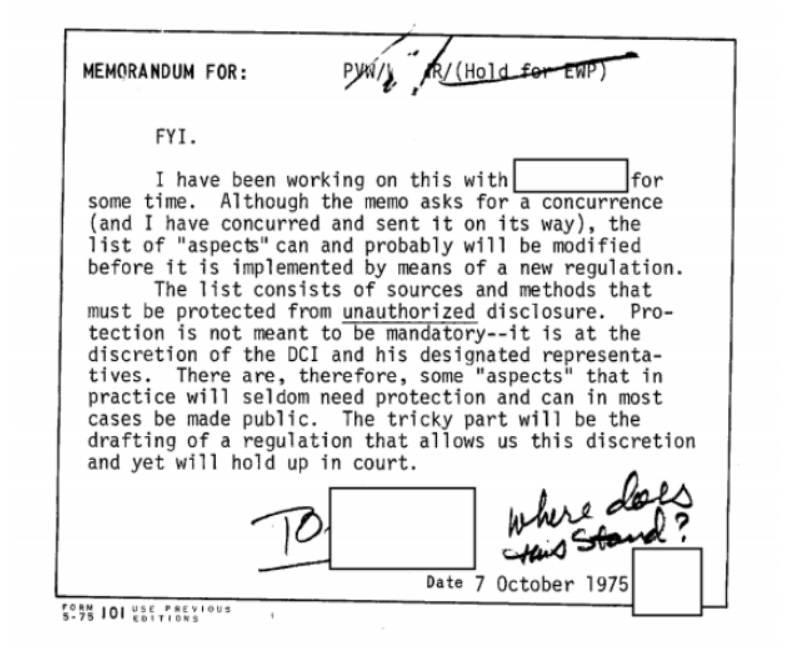 These issues were apparently addressed, as CIA Director Colby signed a determination the following January, ordering the adoption of the list of aspects of intelligence sources and methods. The determination was classified SECRET, and has only been declassified recently and with the redaction of the list. One highly notable aspect of the Director’s determination remains unredacted, however: anything so much as related to any activities of the Agency’s that violated a U.S. statute, Executive Order or Presidential Order” or was “without the authority of law” would not be protected by the determination. This will, of course, be used to challenge a number of b3 and 25X1 redactions in the future. 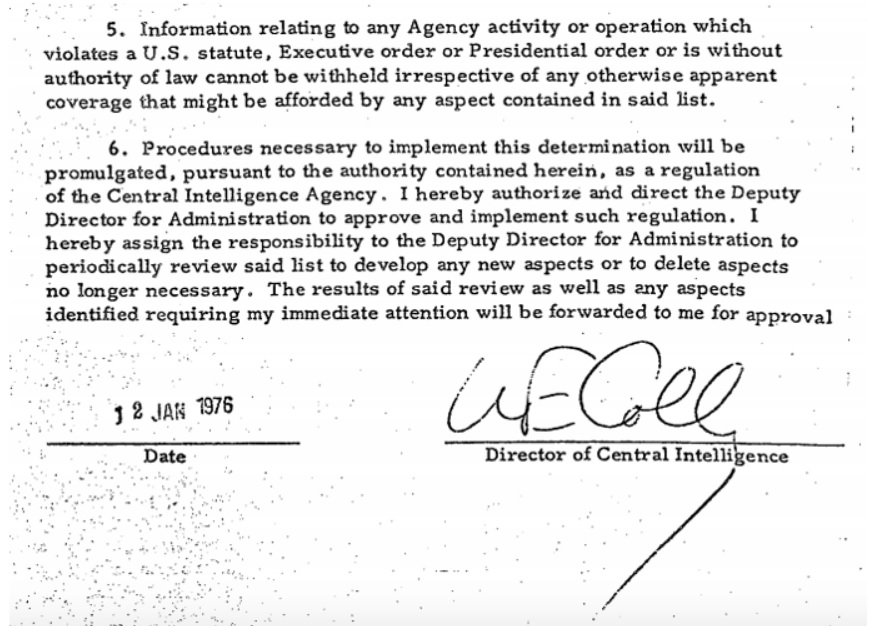