UPDATE: Thanks to records released by National Security Archive, the mystery has been solved: it was both embarrassing and illegal.

One of the dilemmas of reading declassified documents is that readers are constantly faced with the question of whether or not to take the exemptions at face value - after all, CIA redacts beer brands and cafeteria names while claiming to “protect sources and methods.” Doing so erodes faith in the Agency’s choices to redact certain pieces of information, creating a situation where one of two possibilities are likely: that the CIA chose to improperly redact information to protect itself from embarrassment regarding improper activities, or that some of those activities are still seen as at least potentially valid.

25X1 is an exemption against automatic declassification that falls within a narrow range of activities, yet is applied to almost anything, including the signatures of Agency officials whose names are unredacted. According to the Department of Justice, 25X1 is to be invoked only when it will:

The Agency’s often excessive use of the 25X1 exemption becomes, at times, an urgent question of the Agency’s improprieties. One example comes from a formerly TOP SECRET White House memo detailing a meeting between the President and his advisors, including CIA Director Colby on January 3, 1975. 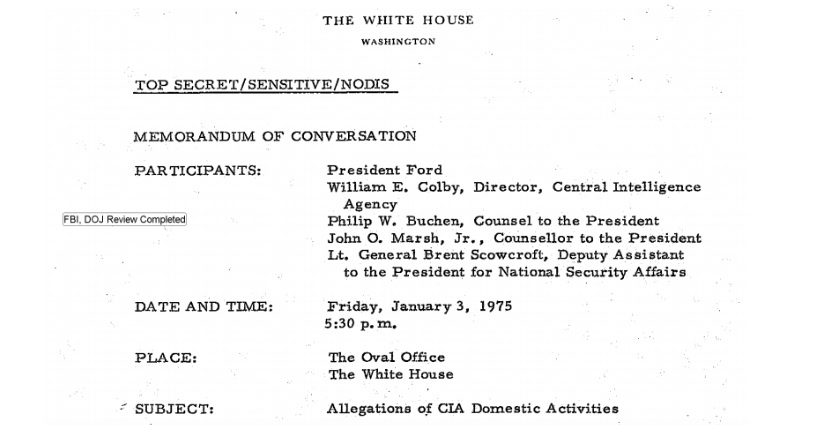 During the meeting, the discussion turned to the Family Jewels, CIA connections to Watergate, and the Agency’s illegal mail opening program. While discussing the latter, for which no one at CIA was ever prosecuted, Colby discussed the Agency’s chronicling of illegal activities. As explained by Colby, the Agency had first become concerned in May 1973, although the program wasn’t stopped until March of 1974. The second half of Colby’s remarks to the President remain completely redacted, citing the 25X1 exemption. 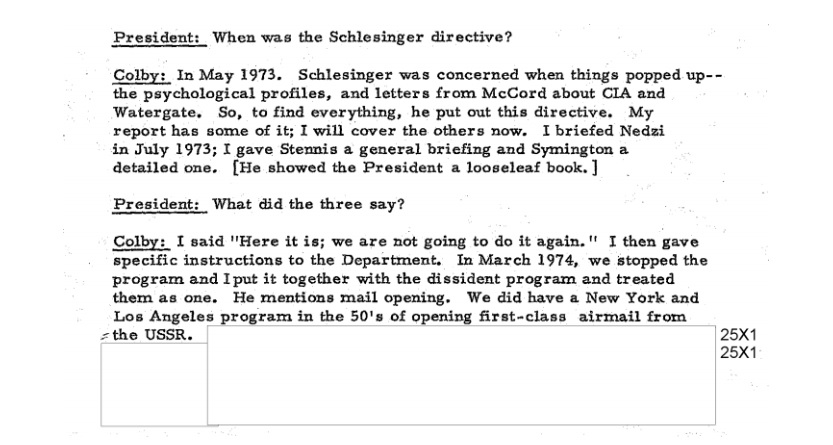 The choice to redact all of the text is part of what makes the exemption’s use unnerving. If 25X1 was invoked to protect “the identity of a confidential human source, a human intelligence source, a relationship with an intelligence or security service of a foreign government or international organization, or a non-human intelligence source” then the information would be easily segregable, and only part of the passage would be justifiably redacted. This leaves only the second half of the 25X1 exemption - revealing the information would “impair the effectiveness of an intelligence method currently in use, available for use, or under development” at the time of the document’s review. In this instance, that was July 2010.

Which leaves us with the million dollar question - is the invocation an example of CIA improperly redacting information, or redacting information about improper activities that were “in use, available for use or under development” in 2010? You can read the full memo below and decide for yourself.