The PROMIS scandal, once labelled ‘the scandal that wouldn’t die,’ lives on according to a recent FBI FOIA response. The affair centered around the government’s theft of the PROMIS software, a forerunner to the infamous PRISM, and the far-reaching fallout which allegedly included everything from fraud, to covert operations and surveillance, to Danny Casolaro’s mysterious death, and remains the subject of an investigation decades after the Department of Justice declared the matter officially closed.

The FBI’s response also reveals that the Congressional investigation was compromised, and additional files on the subject have been alternatively lost or destroyed. Most significantly, the file reveals that the Bureau’s sources indicated the allegations about PROMIS were true.

The PROMIS scandal began in the early 1980s, though the FBI would wait ten years before opening the Inslaw/PROMIS matter as its 51st “Major Case.” Other things deemed Major Cases by the Bureau included Osama bin Laden, 9/11, the Anthrax scare, and the Oklahoma City Bombing. According to a summary sent to the FBI Director in 1992, the roots of the Inslaw/PROMIS case went back to 1982, when Inslaw signed a $9.9 million contract with the government to install PROMIS as the Justice Department’s case management software in 94 U.S. Attorney’s offices. While the DOJ would later claim that PROMIS was unsatisfactory and could not keep up with their needs, this is undermined not only by previous reports of PROMIS’ efficacy but by the fact that, as of the publishing of this article, PROMIS is still in use by New Jersey’s court system.

The DOJ began withholding payments to Inslaw in 1983, a month after Inslaw’s owners had refused to sell the company to a friend of the Attorney General, and a year after Inslaw had demonstrated the software to the FBI for use as their new case management software. As a result, Inslaw was forced into bankruptcy, and eventually sued the U.S. government. The court ruled in Inslaw’s favor, finding that the DOJ’s officials “took, converted and stole” the software through “trickery, fraud and deceit.” 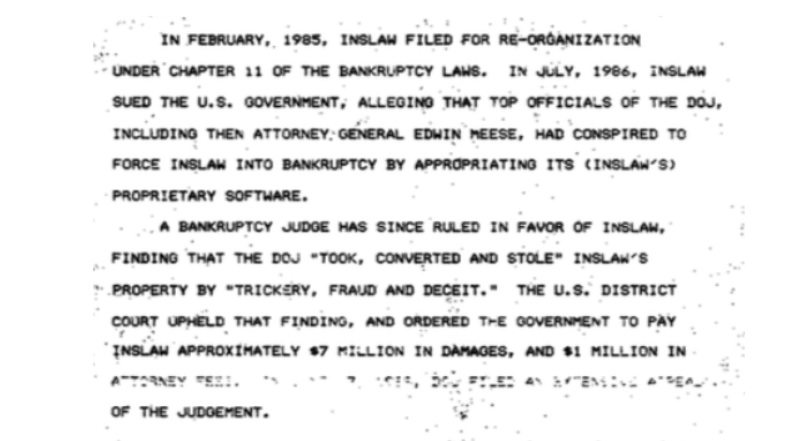 Inslaw’s attorneys, which included Elliot Richardson, who had previously resigned from the DOJ rather than comply with President Nixon’s orders to fire the Watergate Special Prosecutor Archibald Cox, repeatedly demanded a special prosecutor be appointed to investigate the matter, along with its numerous connections that implicated officials such as Ed Meese, who were in turn allegedly connected to affairs such as Iran-Contra and Reagan’s October Surprise.

Instead, the U.S. Attorney, whose office had withheld documents on the Inslaw affair from Congress, appointed Judge Bua as Special Counsel to address the matter with an independent investigation. The actual independence of Judge Bua’s investigation and the Bua Report has come into question. 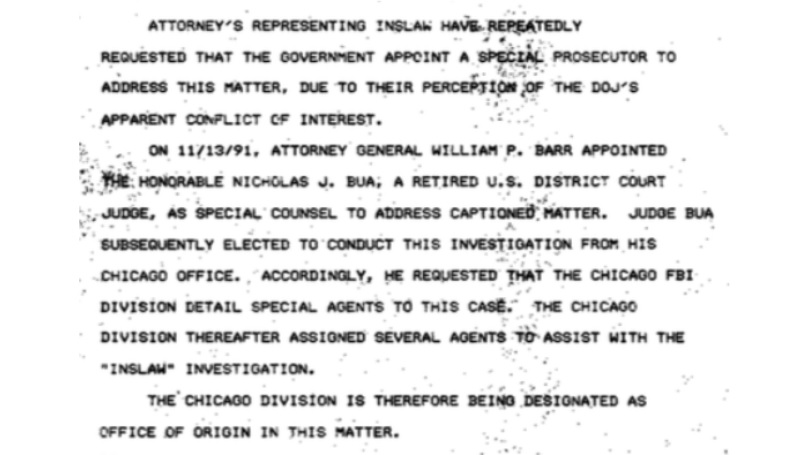 The court’s ruling was later appealed while it was initially upheld, it was ultimately overturned on a technicality. According to a news clipping in an FBI file previously marked SECRET, the decision was overturned the day before the deadline for the DOJ to turn over copies of its software to the Hamiltons for independent analysis and comparison. 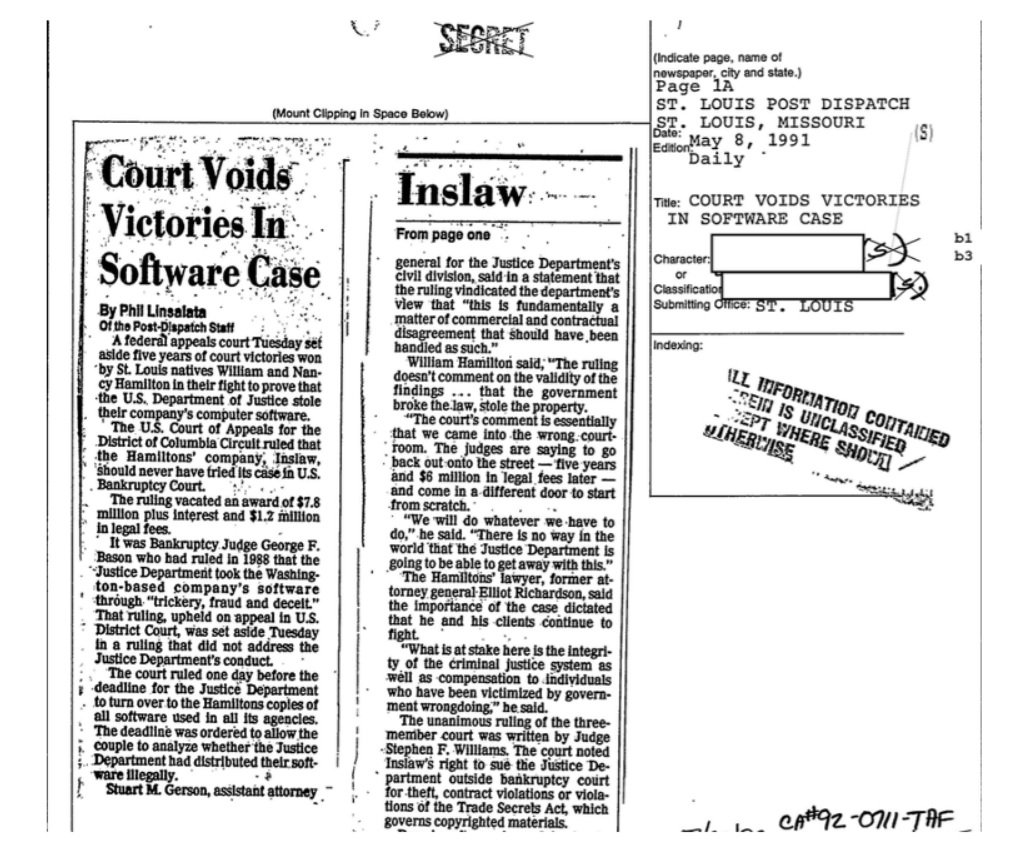 The software that the DOJ would’ve had to hand over included the FBI’s Field Office Information Management System (FOIMS), which was alleged to have been based in part on the PROMIS software. The history of FOIMS itself is a questionable one, and one with implications for both national security and transparency - by the time FOIMS was fully implemented, it was already out of date.

Development on FOIMS began in September 1978. In 1979, the first pilot project was implemented, consisting of FOIMS “basic”, which only allowed specially trained personnel “to perform word processing and administrative functions,” while leaving agents without access. While a more advanced version of FOIMS remained under development, according to the FBI, in 1981 they decided to switch from COBOL, the language PROMIS was written in, to the ADABAS database management system. That year, CIA and other federal agencies are offered copies of the software as part of the federal government’s internal software sharing program.

The following year, the DOJ provided a copy of the PROMIS software to an Israeli gentlemen who identified himself as Joseph Ben-Orr. According to retired Israeli spy Ari Ben-Menashe, the name of Dr. Ben-Orr was an alias of Israeli spymaster Rafi Eitan. According to an affidavit from journalist Gordon Thomas, Eitan later admitted his role in the PROMIS affair, and was also identified through photographs as the individual who visited Inslaw for a demonstration of their enhanced PROMIS software. While the DOJ insisted that it was a Dr. Ben-Orr which they provided a copy of basic PROMIS software to, a review of the DOJ’s files reveals that they were aware that the real Dr. Ben-Orr was not in the country when the copy was given to the Israeli calling himself Joseph Ben-Orr - a fact which was omitted from the public reports. As revealed by a release of DOJ documents from the National Archives, the Bureau was involved in the investigation for this affair and was provided with the returned copy of PROMIS in 1994. No mention of this appears in the Bureau’s release. 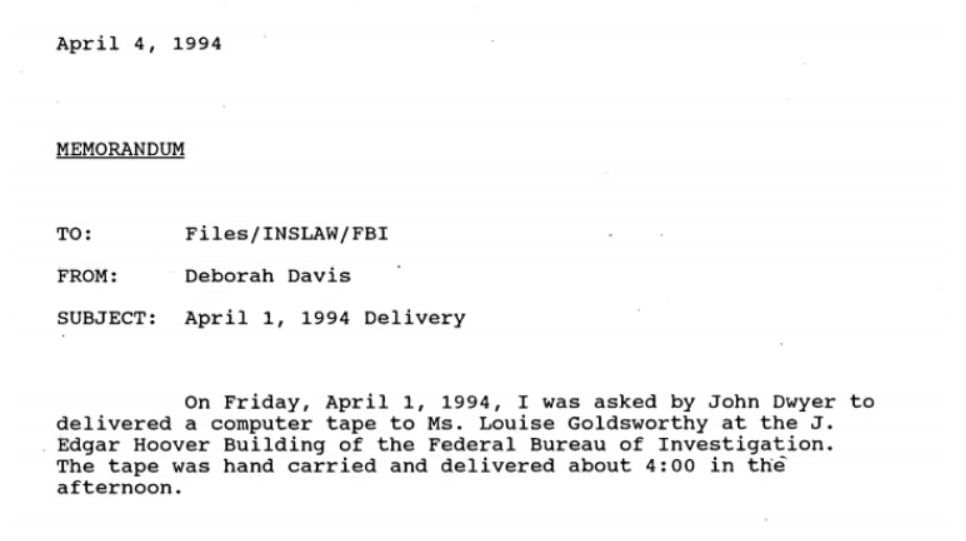 According to the FBI, Inslaw demonstrated its PROMIS software to the Bureau the same year the DOJ provided a copy of it to Ben Orr/Rafi Eitan. According to the Bua Report, “at that time the Bureau’s technical support personnel determined that the PROMIS would not meet the agency’s requirements.” The FBI concluded that, to use INSLAW’s PROMIS, the Bureau would need to spend a considerable amount of time and money to modify and/or convert existing systems to accommodate the new software.” Preparation and installation of FOIMS would ultimately take 13 years, but it would only take another two years for the estimated cost to reach $50 million dollars.

Although the Bureau asserts that the software was developed entirely in house, a 1987 issue of Network World reported, after an interview with senior Bureau personnel, that a contract for FOIMS had been awarded in 1982 but that the bidding process had restarted. The issue also identifies the project as having been developed by the Systems Development Section within the Bureau’s Technical Services Division. A 1983 GAO Report further muddies the issue by stating that the development of FOIMS had been assigned outside the Systems Development Section.

That same year, Hadron Inc. attempted to buy Inslaw and PROMIS. The company refused, and the DOJ began withholding payments to Inslaw, eventually forcing the company into bankruptcy. Hadron Inc. was ultimately owned by Earl Brian, a long-time friend of Attorney General Edwin Meese. Meese, who later served as an advisor for President-Elect Trump, had failed to disclose his wife’s investments in Earl Brian’s companies - investments that had been made with money loaned to Meese’s wife by a close associate of Earl Brian.

Brian would later be convicted for financial fraud relating to loans. As Richard Fricker noted, the evidence showed “that Dr. Brian - Mr. Credibility in denying October Surprise and PROMIS allegations - was a con man.” The FBI’s own sources indicated that “top officials at DOJ conspired to have Inslaw liquidated in bankruptcy proceedings in order that [redacted] a close associate of former Attorney General Edwin Meese, could obtain PROMIS software.” 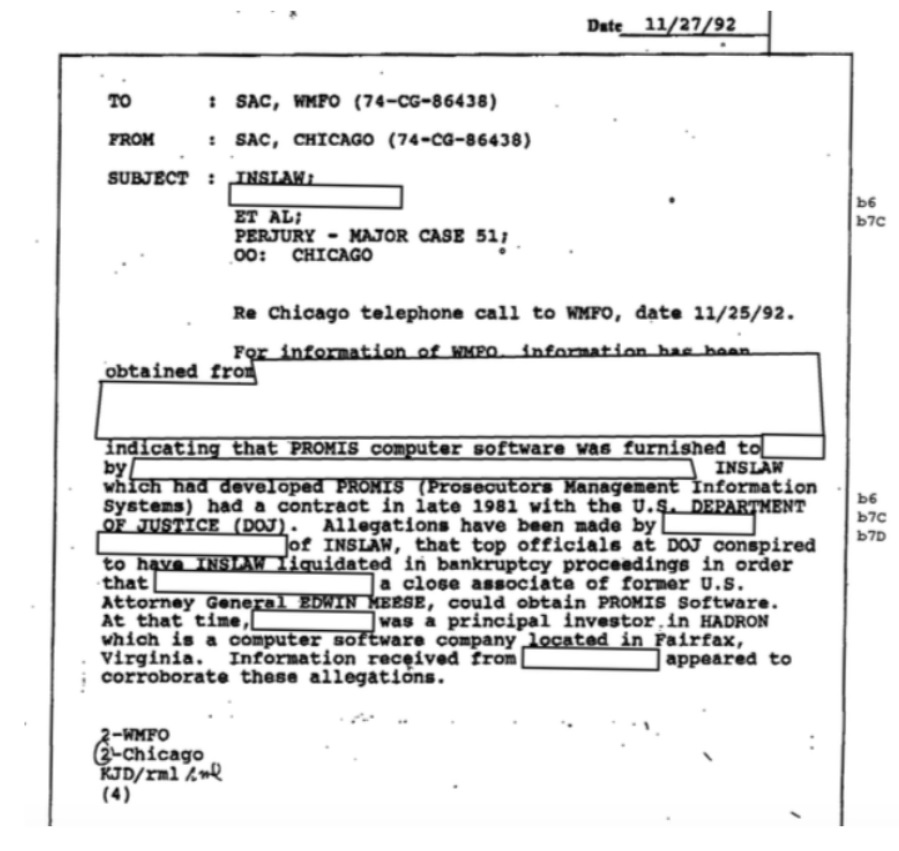 Given the apparent discrepancies in the narrative of the FOIMS development cycle, its parallels to the development and distribution of PROMIS and the FBI’s own sources indicating there was a conspiracy involving top DOJ officials, it’s difficult to accept the evidence presented by the FBI that FOIMS and PROMIS are unrelated. Those discrepancies, along with the decision which prevented the DOJ from having to supply the software for independent analysis, make the flawed code comparisons that were done and the FBI’s denial’s all the more questionable. 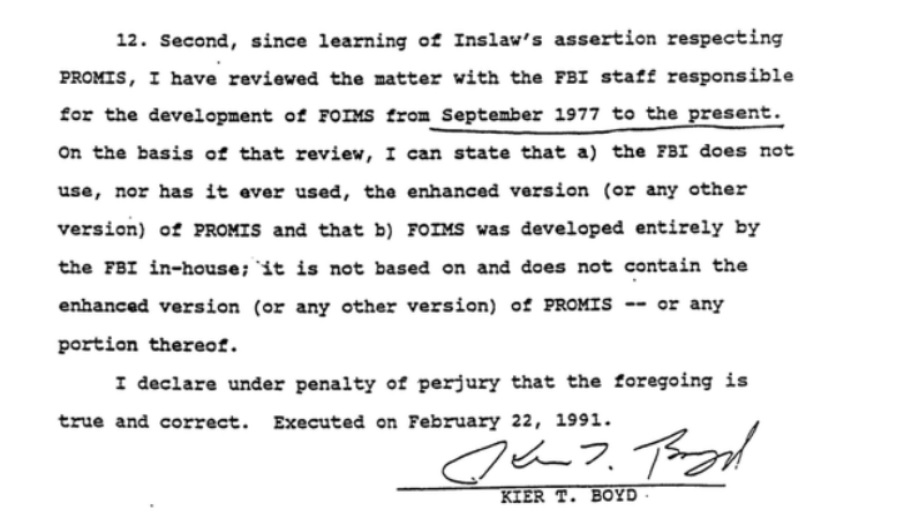 According to their release, the extent of the evidence provided by the FBI that FOIMS was not based in anyway on PROMIS was a signed document asserting that an FBI review behind closed doors indicated they had done nothing wrong. That journalist Danny Casolaro was investigating these allegations when he died, and that FBI lied to Congress about the investigation into his death only increase the burden of proof on the Bureau. The additional murder of one of Casolaro’s sources, which the FBI asserts is still under investigation, and the Bureau’s own sources implicating the former Attorney General in a conspiracy to steal PROMIS further raises the stakes - and the necessity of FBI actually disproving the allegations laid against it.

Read part of the file embedded below, and the rest on the request page.