The FBI file for the suspicious death of journalist Danny Casolaro is obviously incomplete, even before realizing that the release is about 1,000 pages smaller than the FBI first estimated. However, the file does reveal several key things. First, the FBI’s sources contradicted what the DOJ would declare were the motives behind Casolaro’s “suicide.” Second, the file shows that the Bureau lied to members of Congress about not investigating Casolaro’s death. Third, documents show that the FBI agents who did investigate it questioned the conclusion of suicide, even though doing so was understood to be a threat to their careers.

Danny Casolaro was a journalist who had been working on a complex case involving government corruption stretching from the DOJ and FBI to the CIA and beyond. His death has often been connected to the death of Alan Standorf, who had been one of his sources. Like Casolaro’s, Standorf’s death is suspicious for a number of reasons discussed here. Despite asserting that it was a simple robbery-homicide and unconnected to his work with the Army and NSA, the FBI claims that there is an ongoing law enforcement proceeding regarding Standorf’s death. Casolaro’s death was ruled a suicide, although those conclusions are challenged both by previously released documents and new materials in the FBI file.

The official report issued by Judge Bua - the ostensible independence of which is questionable - states quite clearly that the motive behind Casolaro’s alleged suicide was financially based.

The FBI’s interviews with sources, however, contradict this conclusion. According to one of the individuals interviewed, Danny wouldn’t have killed himself over money - he “could have borrowed whatever money [he] needed.”

At the time of his death, Casolaro was investigating a network of corruption that included PROMIS, and the BCCI and BNL banks. From there, his investigation spread to other events. A copy of one of his notes and book proposals on the subject was provided to the Bureau. 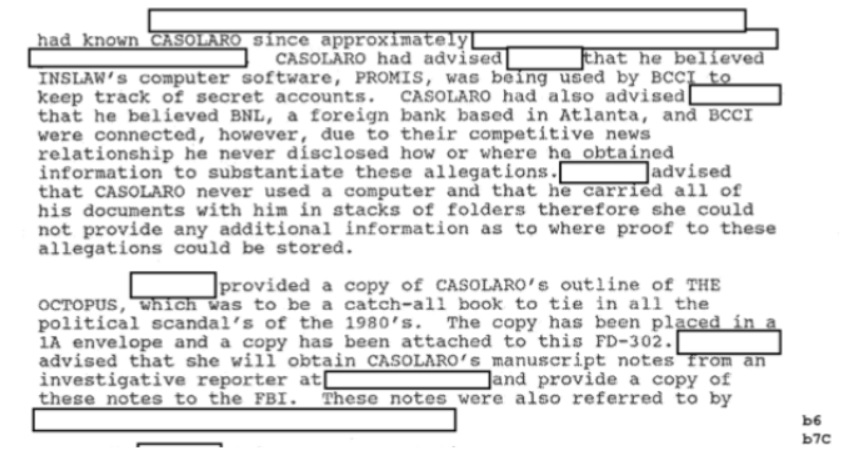 “What may have begun,” Casolaro wrote, “for these few learned men as a utopian response to the harsh post-war realities quickly gave way to what simple men have always known to be the real enemy which is selfishness and its allied forces of fear, greed and power.” 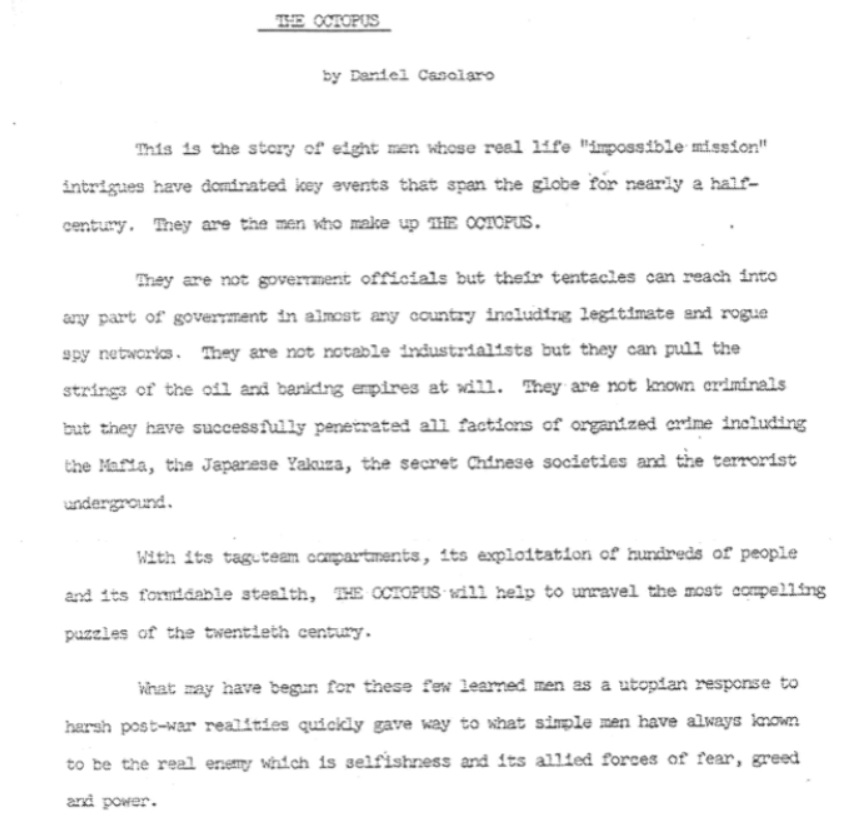 Given the nature and suspicious circumstances of Casolaro’s suicide, his family and many of his friends suspected the suicide had been staged. While there was plenty of disagreement (much of which now seems tainted by revelations such as the forensic expert basing his conclusions on a police reenactment video), the suspicion was more than enough for multiple calls to be made of a major inquiry into his death. That his source Alan Standorf had also died under mysterious circumstances and that the law was violated by embalming his body without consent or a proper autopsy simply added fuel to the fire. A year after Casolaro’s death, this led to Congressman John Porter writing to FBI Director Sessions about the matter. 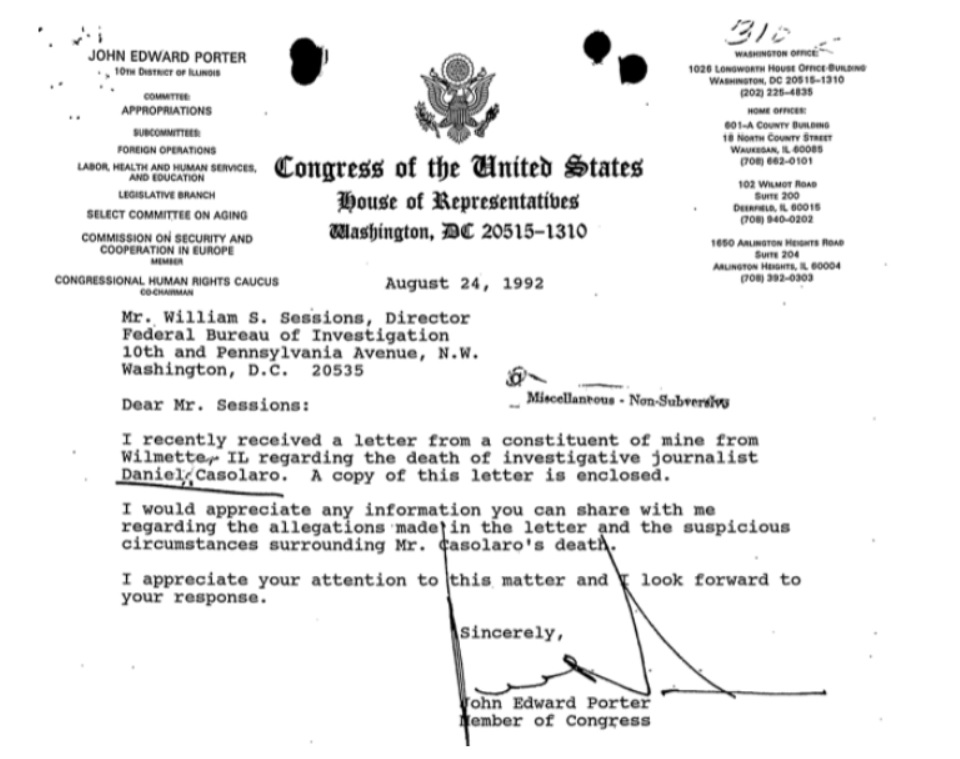 It’s unclear precisely when the FBI investigation into Casolaro’s death began, but FBI’s Inspector in Charge for the Office of Public and Congressional Affairs assured Congressman Porter that there was no investigation on September 14, 1992. 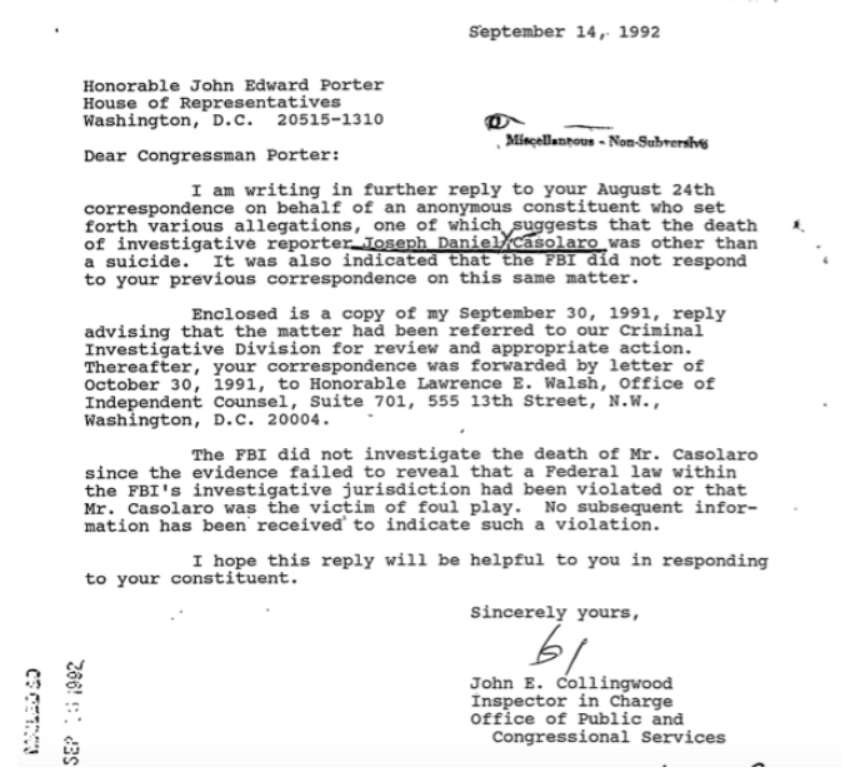 However, FBI documents reveal that they were investigating Casolaro’s death as early as the next day. 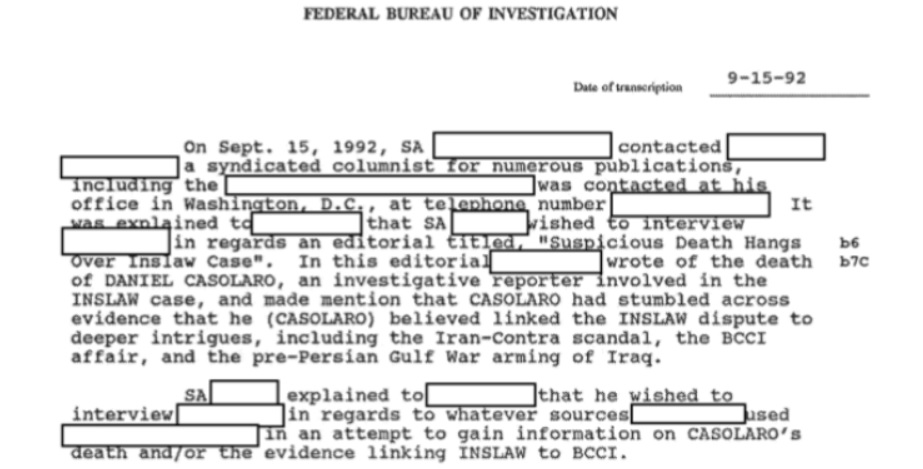 While this response might not have been a willful lie to Congress, the next assurance issued by the FBI’s office was - several weeks after the Bureau had begun investigating aspects of Casolaro’s death, they informed Congressman Vic Fazio that not only weren’t they investigating the matter, but they were “unable to” investigate it. 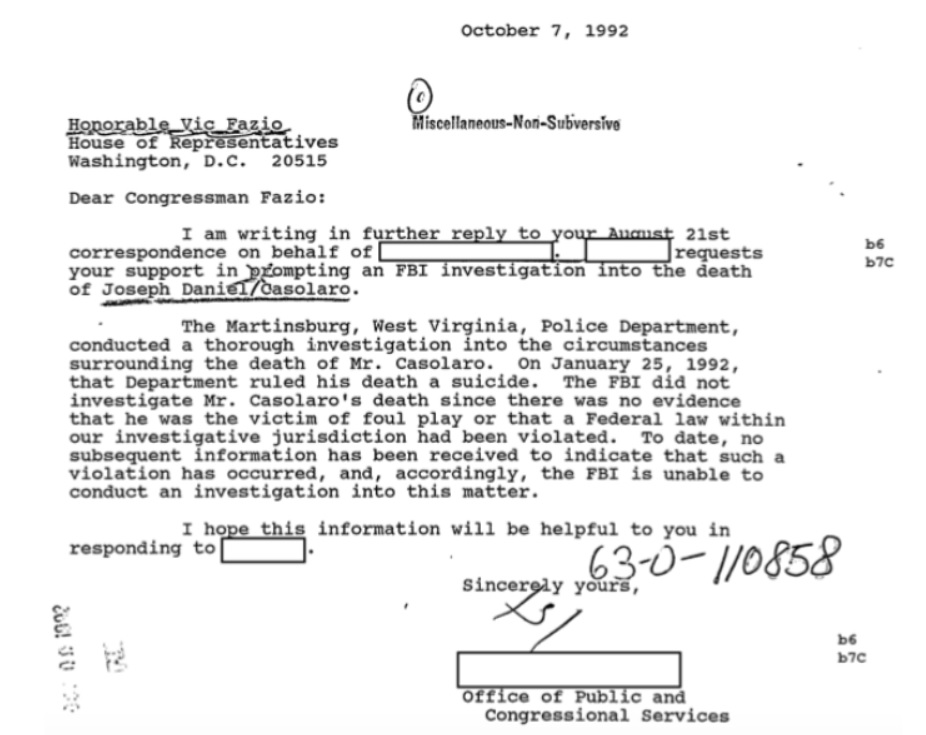 Other FBI interviews prior to the letter to Congress make it explicit that the Bureau was investigating aspects of Casolaro’s death.

The FBI’s claim to Congress that they could not investigate the matter, and that no federal law appeared to have been broken, is also contradicted by materials from the Martinsburg offices that the Bureau insisted had jurisdiction. According to a letter from the then-assistant prosecutor, who still worked in the office years later, the Casolaro file had been sealed on the direction of “federal authorities” who took copies of everything after informing the Martinsburg offices that they were no longer the custodians of those records. The federal authorities then instructed the Martinsburg offices not to unseal or otherwise discuss the materials unless they received a “federal release.” 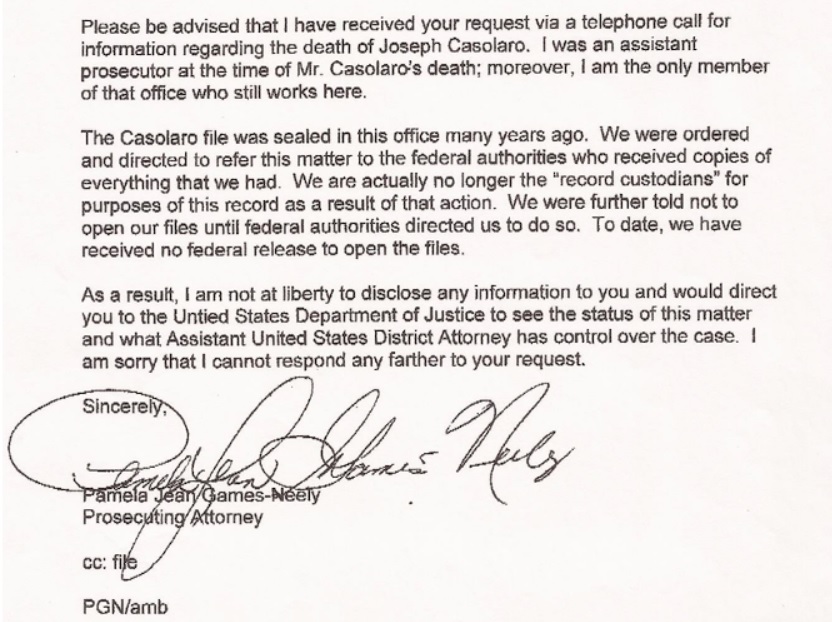 Some of these Martinsburg materials, such as notes from the Martinsburg Police, have subsequently been obtained and seem to contradict what the official report says the notes say.

Other FBI documents, previously released as part of a Special Access Review being conducted by the National Archives, also contradict the assertion to Congress that the matter was not being investigated by the FBI. These documents show that FBI agents attempting to investigate the matter found themselves meeting “almost complete resistance from the Martinsburg police and prosecutor’s office.” While one agent in Pittsburgh suggested this was because they “felt besieged,” the letter from the prosecutor’s office implies that it may have been the result of instructions from federal authorities.

Another section of the formerly SECRET report shows that the FBI was aware of threats made against Casolaro’s life, but that they “expressed little interest” while the DOJ declared the death a suicide. 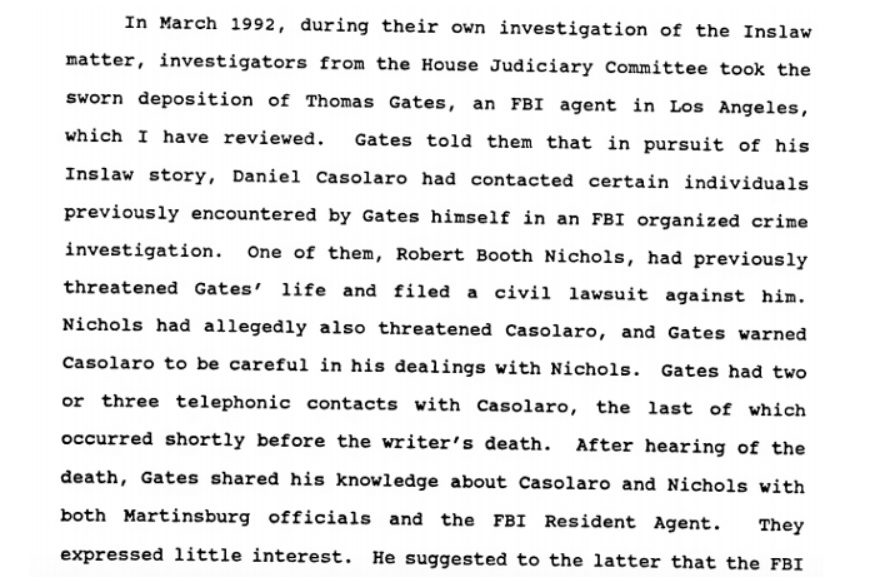 The FBI similarly ignored the recommendation of FBI Special Agent Thomas Gates that a murder or ITAR investigation be opened into the death of Danny Casolaro and the surrounding events.

This document also shows that additional interviews were conducted but unreleased, which may have been in the approximately 1,000 pages that the FBI decided were non-responsive to the request.

When the FBI BCCI Task Force tried to gain access to this information, they were simply denied. 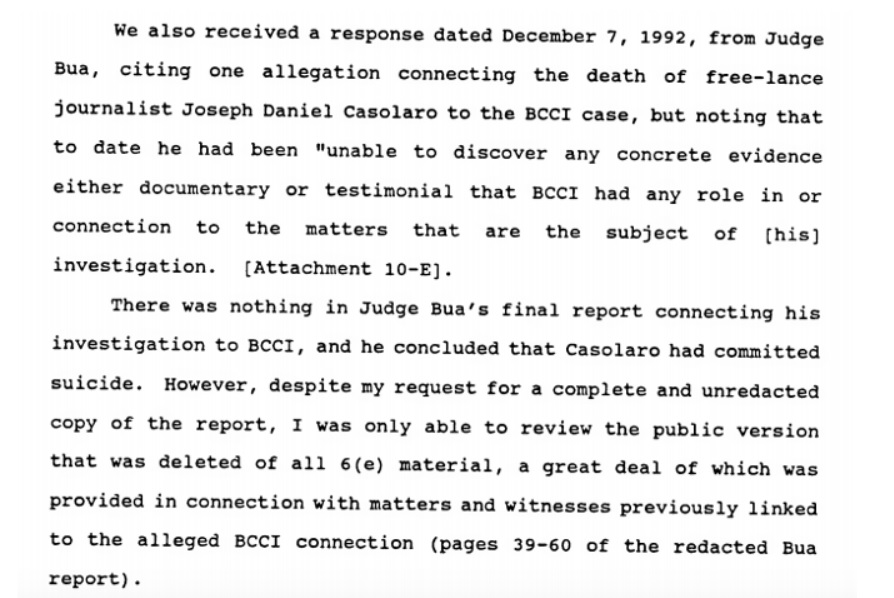 Collectively, the FBI documents which have been released do a great deal to undermine the official narrative of Danny Casolaro’s death and the DOJ’s conclusions. Not only did the Bureau lie to Congress, but they dropped leads and may well have interfered in their own investigation. This, combined with the DOJ’s decision to ignore the changing alibi of the main suspect in Casolaro’s death, and the FBI’s sources contradicting what the DOJ said was the motive behind the alleged suicide, casts significant doubt on the Bureau.

Additional materials from his FBI file will discussed in a future article, along with the FBI file on PROMIS, which has been called a forerunner to PRISM. In the meantime, you can read the FBI file embedded below, or on the request page.