While declassified FBI records showed the fear that agents felt over questioning the suspicious death of Danny Casolaro, a journalist investigating the PROMIS affair, the FBI file on PROMIS describes two instances of apparent retaliation associated with the case.

The first instance was against Judge Bason, who had found for Inslaw and ruled that the Department of Justice had stolen the software through fraud, trickery, and deceit. Shortly after his ruling, he was not reappointed to the bench. Believing there was a connection, he filed a lawsuit over it, only to have it dismissed.

On the next page, the FBI document describes how Leigh Ratiner, Inslaw’s attorney, had been fired from his law firm for his “failure to control” Inslaw. Ratiner believed that this was in retaliation for naming Lowell Jensen in the Inslaw suit. 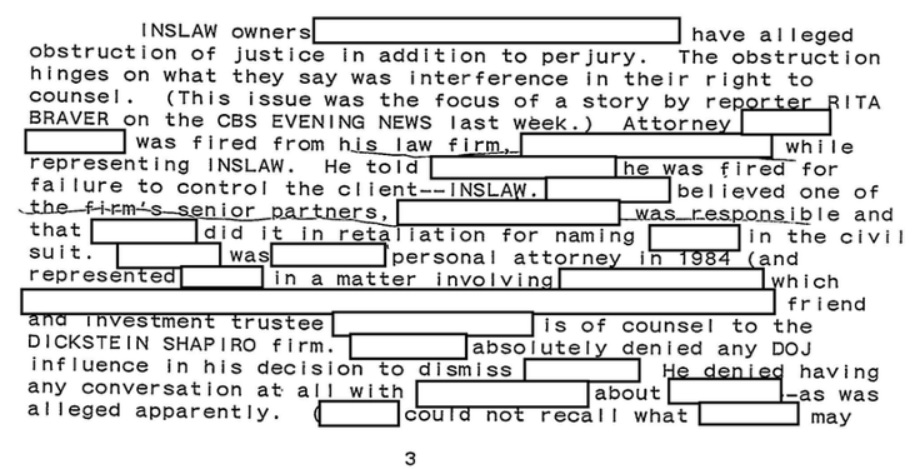 According to WIRED, “his firing came after another Dickstein partner, Leonard Garment, met with Arnold Burns, then- deputy attorney general of the DOJ. [Garment] testified before a Senate inquiry that he and Meese discussed the Inslaw case in October 1986, and afterward he met with Burns. Two days later Ratiner was fired.”

Ratiner ultimately settled with his firm over the wrongful termination to the tune of $600,000, which apparently had been supplied by Hadron. In testimony included in a DOJ release on Inslaw, Burns testified in a sworn interview that he had discussed the matter with Garment. 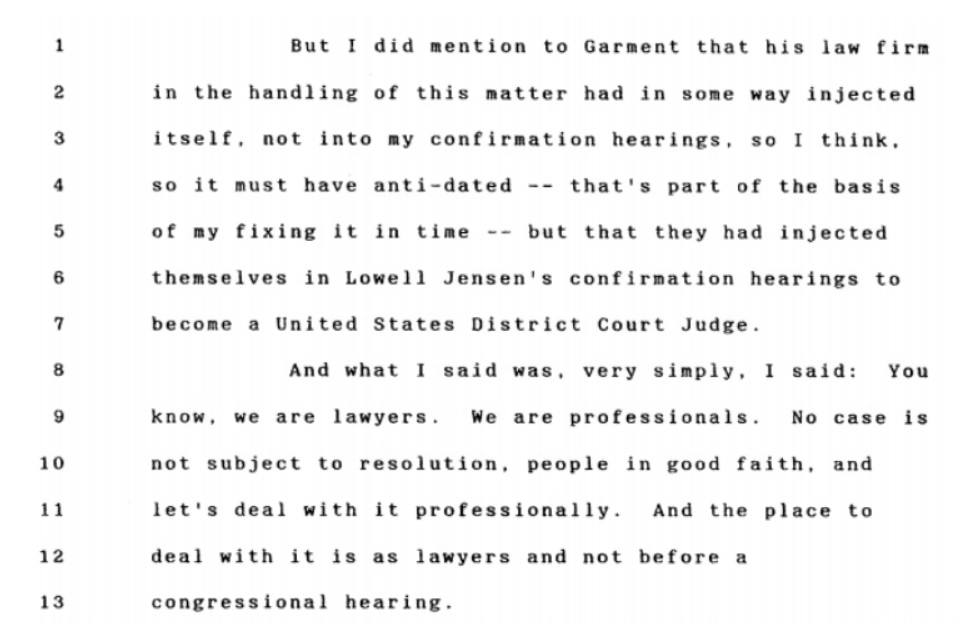 Burns went on to clarify his meaning about not airing the issue out in a Congressional hearing - his own confirmation hearing. A letter had been written by Ratiner or someone at the law firm which threw a “monkey wrench” into Burns’ confirmation process and he “thought [that] was unlawyer-like.” He compared this to the effects of naming Lowell Jensen when his nomination was pending. According to Burns, they were bringing Jensen into the affair to “blackmail him.” 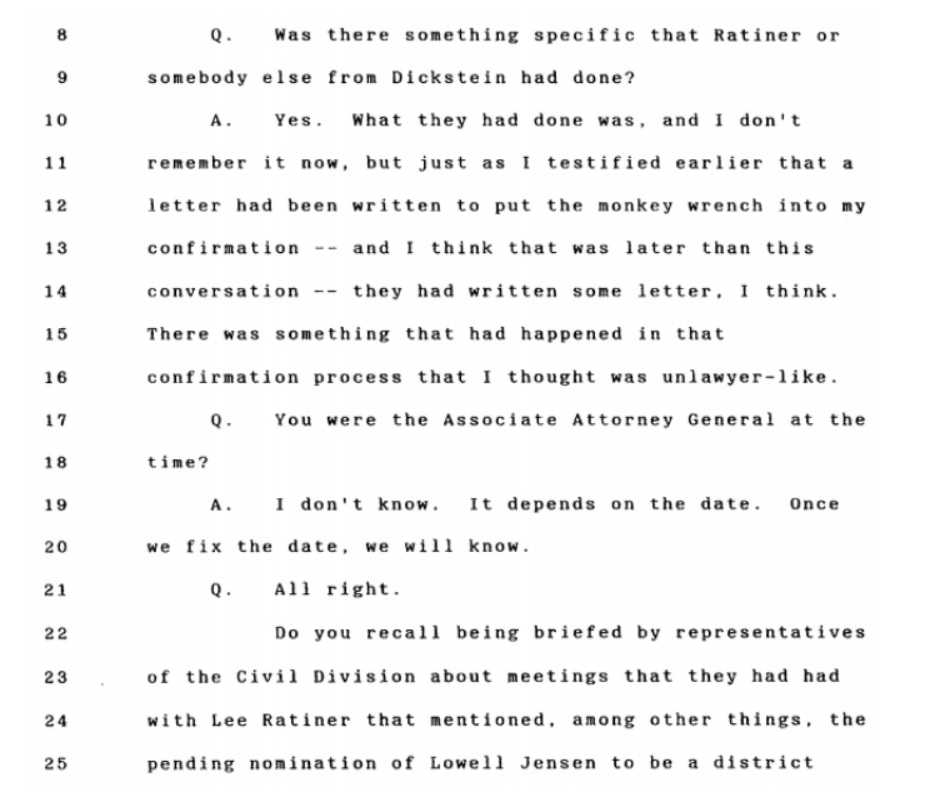 This, of course, was disingenuous - Jensen had been part of the Inslaw affair from the beginning and had long been accused of impropriety. To claim that it was blackmail to not drop accusations simply because the person was nominated to public office and seeking confirmation is ludicrous, yet this is what precisely what Burns did when he criticized Ratiner for being “heavy handed.” WIthout any specifics from Burns as to what this consisted of, it’s hard to see the difference between “heavy handed” and “zealous representation” through all legal means.

A document from the FBI’s BCCI Task Force shows that members of the Task Force were denied access to certain materials in their investigation - one that would ultimately find connections between the PROMIS case, the death of Danny Casolaro, and the CIA-linked Bank of Credit and Commerce International (BCCI). The FBI release on PROMIS reveals that the BCCI-related obstruction wasn’t limited to the failure to provide the Task Force with an unredacted copy of the Bua Report, but extended to the House Judiciary Committee charged with investigating the PROMIS affair and the EAGLE procurement issues. In at least one instance, false information was provided. In another, leads connecting PROMIS, BCCI and government officials were simply “not followed up.”

Other leads provided to the Judiciary Committee seemed to simply disappear, with any hints as to what happened hidden behind redactions.

A newspaper clipping in a formerly SECRET message sent to the FBI Director reveals that the investigation into the Inslaw affair resulted in Congress quietly investigating the October Surprise allegations before the House of Representatives officially took up the case. While Mitch McConnell would later argue that the matter had already been investigated, an FBI file would later reveal that at least one of those investigations were compromised.

According to the article and the affidavits it was based on, the PROMIS software had been modified by Michael Riconosciuto (who was arrested days after providing information to Congress), on the Cabazon Indian Reservation, where he worked as part of a Wackenhut project. That project also included the manufacture and sale of weapons - some of which would allegedly be tied to the Iran-Contra scandal. This software was then sold around the world, with the proceeds allegedly both lining the pockets of those involved and funding covert operations. At the same time, the backdoor in the software and the accompanying modified hardware would allow the intelligence community to covertly draw information from government and financial computer systems around the world. 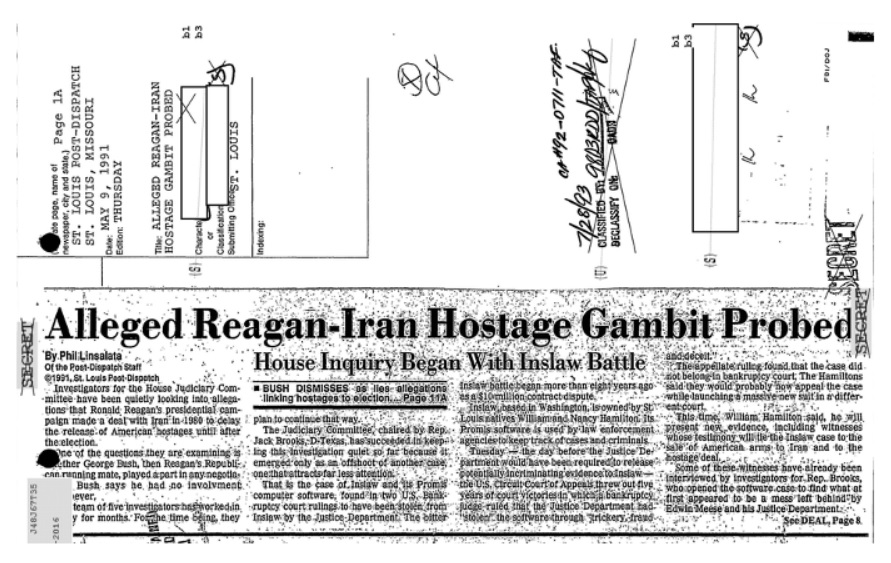 The FBI file on PROMIS also includes additional material on Danny Casolaro not in any of the FBI releases on him. These include newspaper clippings and additional correspondence with members of Congress. 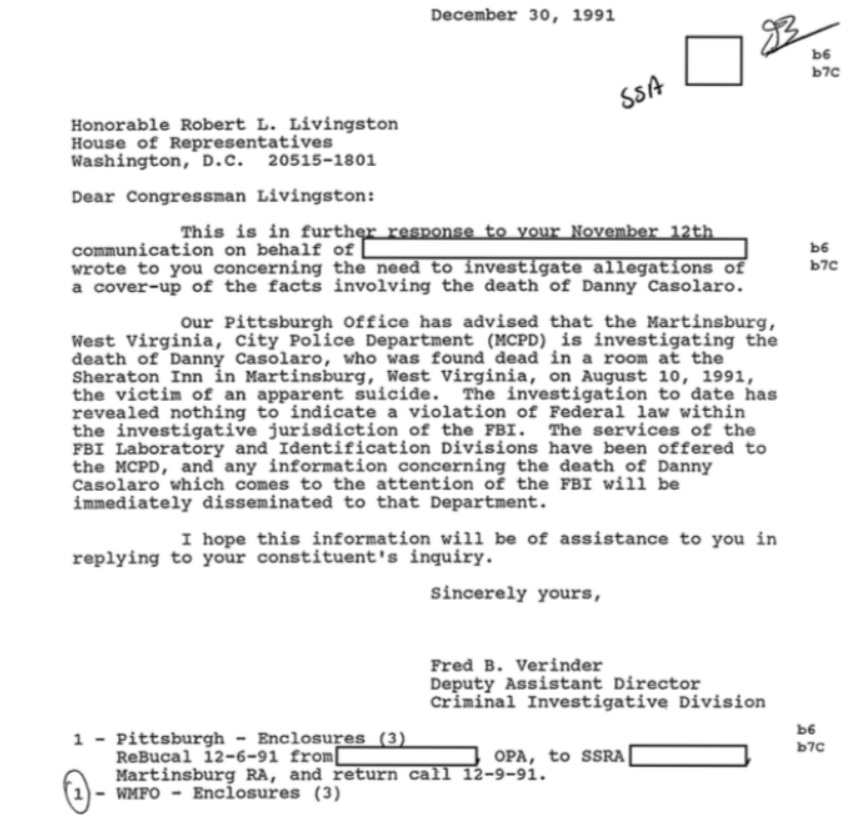 Regardless of these revelations, many aspects of the case simply aren’t discussed in the files released. Whether they were never investigated or are among the lost, destroyed or sealed files on PROMIS is a crucial question that we may never have an answer to.

As early as the mid-1990s, PROMIS was connected to an alleged database of individuals to be arrested or detained in the event of an emergency, a database that was fed by vast amounts of surveillance information. The murdered Alan Standorf is believed to have been one of the sources for this information, which was confirmed by Tim Shorrock in 2008. Of course, such a measure was hardly unheard of, as has been documented through FBI files obtained by MuckRock.

In fact, the use of PROMIS in surveillance activities has led to it being dubbed “PRISM’s controversial forerunner.”

As the FBI file show, the PROMIS case was not only far reaching, but obstructed. While at least some allegations were confirmed by sources and documentation, others were blocked in their entirety, with evidence being lost and destroyed by both Congress and the FBI. Other materials remain sealed on federal orders despite the FBI’s false claims that the matter wasn’t part of a federal case. Still other materials remain sealed because of an acknowledged pending federal investigation, the details of which are sealed in their entirety.

While additional files produced by the Department of Justice are under review, you can view the clipping embedded below, and the rest of the file on the request page.