While a recently released copy of John Tower’s FBI file dealt mostly with the background check performed by the FBI, it also includes several important revelations concerning the Senator. While most reviews of his nomination process and the scrutiny that he received focused on allegations of heavy drinking and womanizing … 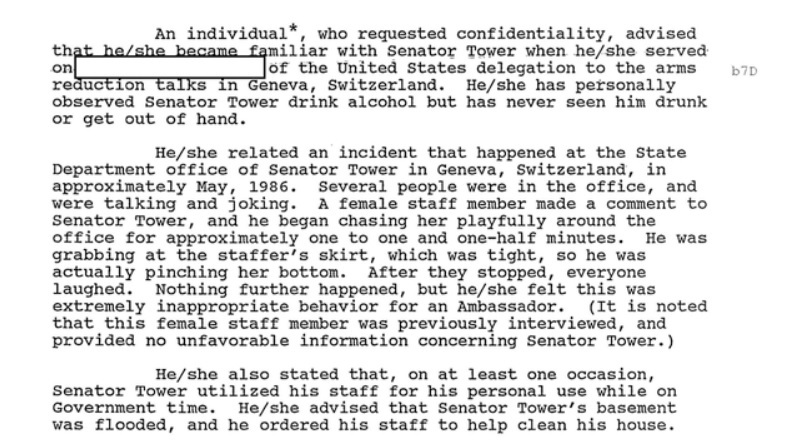 it also dealt with the long under-examined allegations that the Tower Commission, officially known as the President’s Special Review Board, was part of a whitewash for the Iran-Contra affair – which, it turns out, Senator Tower had personal connections to, along with a pivotal role in the 1980 “October Surprise”. In fact, in exchange for whitewashing the affair, Tower was allegedly to be rewarded with the nomination to become Secretary of Defense.

An FBI memo from 1988 reveals that they were investigating allegations that Senator Tower had been approached by a representative of the Khomeini regime in 1980 about supplying Iran with replacement parts for planes, planes which would be used in Iran’s war with Iraq. 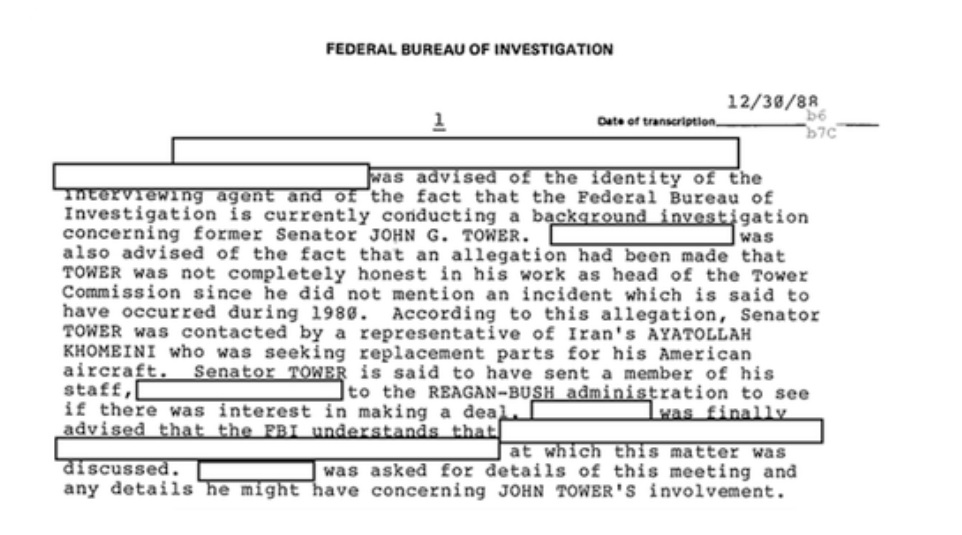 The meeting being referred to was the infamous L’Enfant Plaza meeting, which is one of the well-documented aspects of the October Surprise lead-up. The short version is that at least one representative from Iran approached Senator Tower about replacement parts for American F-14s in Iran, and the possibility of releasing the hostages. Senator Tower had his then aide, Robert “Bud” McFarlane handle the issue and meet with the individual to determine his credibility. 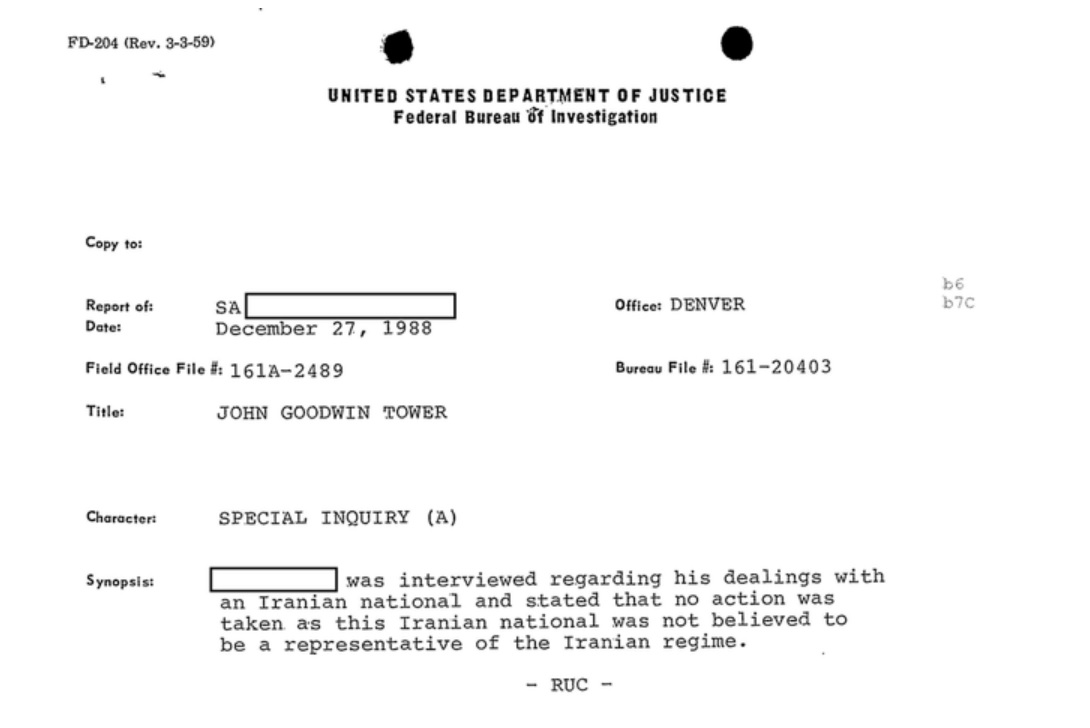 According to some versions of the meeting, the Americans dismissed him because he didn’t seem credible. However, it was common knowledge that the individual, Houshang Lavi, had played a role in getting the F-14s to Iran in the first place. Significantly, none of the witnesses changing stories have been able to provide an explanation for how Lavi seemed “not credible.”

McFarlane brought several people with him to the meeting at L’Enfant Plaza, including Richard V. Allen. Allen’s presence was significant because of his involvement in the October Surprise working group, which sought to monitor any attempts to arrange a last minute release of the hostages, including “U.S. shipments of arms to Iran in exchange for the hostages.” 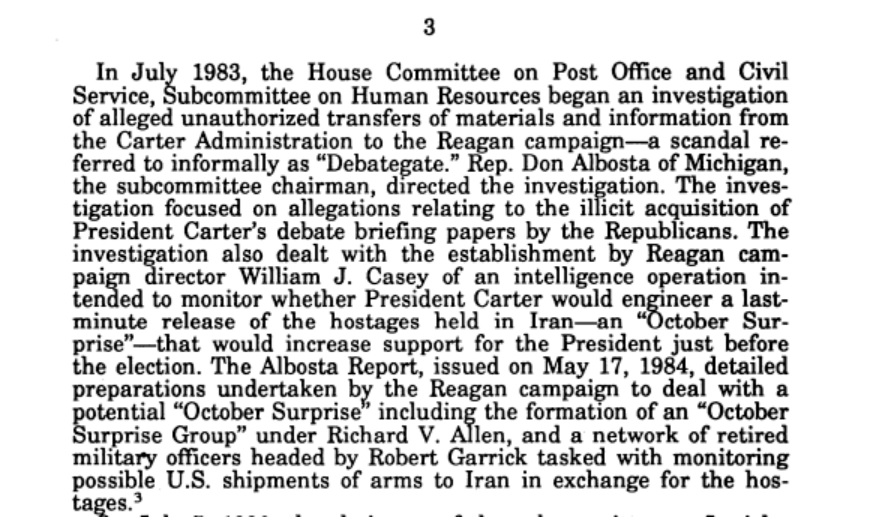 It would be possible to dismiss Tower’s involvement as innocent or naive, except it was not disclosed during his time on the Tower Commission, which investigated the transfer of arms to Iran and involved the freeing of hostages. More damningly, he denied the entire affair to the FBI. Not only does this explicitly implicates him in a coverup of October Surprise activities and a failure to properly disclose information and a potential personal conflict of interest, but this itself is a crime

These allegations were not lost on the House of Representative’s October Surprise Task Force, which was then investigating the matter. The Task Force wrote to FBI Director Sessions and asked for access to certain files as part of their investigation. 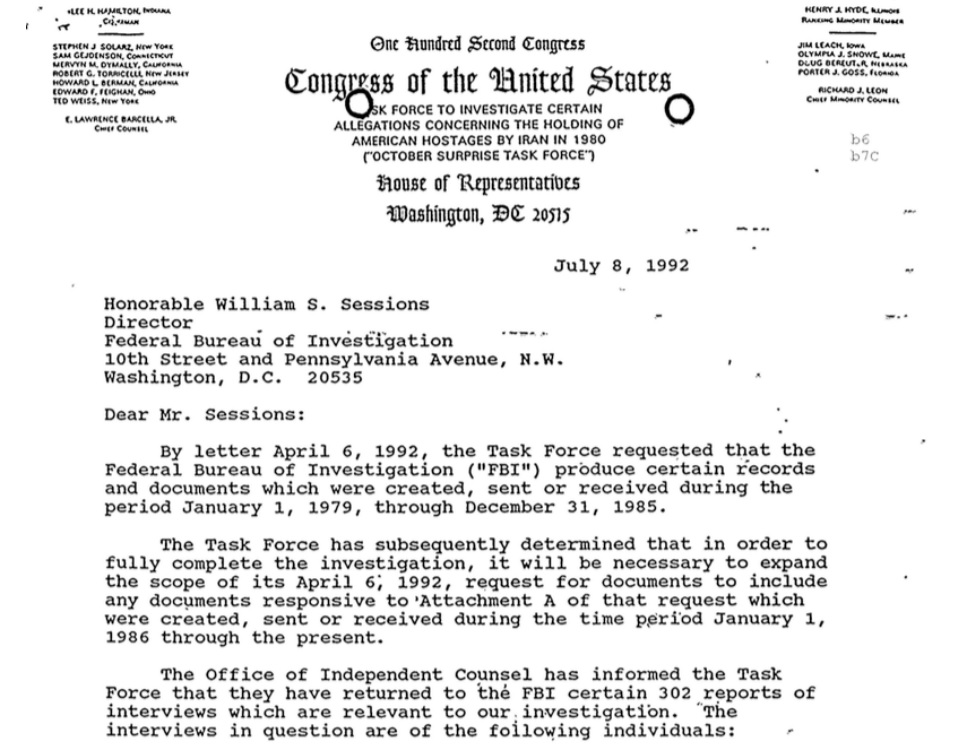 The FBI Director apparently received permission to release the files but provided only a limited selection of redacted documents. Partially as a result of this extremely limited selection, the Task Force largely accepted Allen’s newest account of events, despite the many contradictions between it and the accounts of others – including previous accounts given by Allen himself.

One of the interviews that does appear to have been included puts forward an unlikely story that seems to have been omitted from the October Surprise Task Force’s report (which has been falsely reported to have been unanimous and without dissenting opinion from the Task Force’s members). According to this account, at the L’Enfant Plaza meeting Lavi was instructed to go to the Carter administration with the offer.

This seems extremely unlikely given the fact that, as mentioned above, Allen held a senior position on the Reagan October Surprise group, which was obsessed with countering attempts by the Carter team to do exactly this.

While notably, this selection of interviews did not include the interview in which Senator Tower lied to the FBI about the L’Enfant Plaza meeting, perhaps the most significant interview missing from that highly limited selection was Samuel Cummings’ – the CIA arms trafficker who had not only been involved in Iran-Contra, but was the brother-in-law to Senator Tower.

The FBI weren’t the only ones to omit references to Cummings - Tower completely failed to mention the man in the Tower Commission’s report. He was not, however, ignorant of the man’s work or its possible connections to Iran-Contra. According to the FBI’s interview of Cummings, the one professional contact that he shared with his brother-in-law was in January 1987 when Tower asked Cummings to testify in the Iran-Contra Hearings. 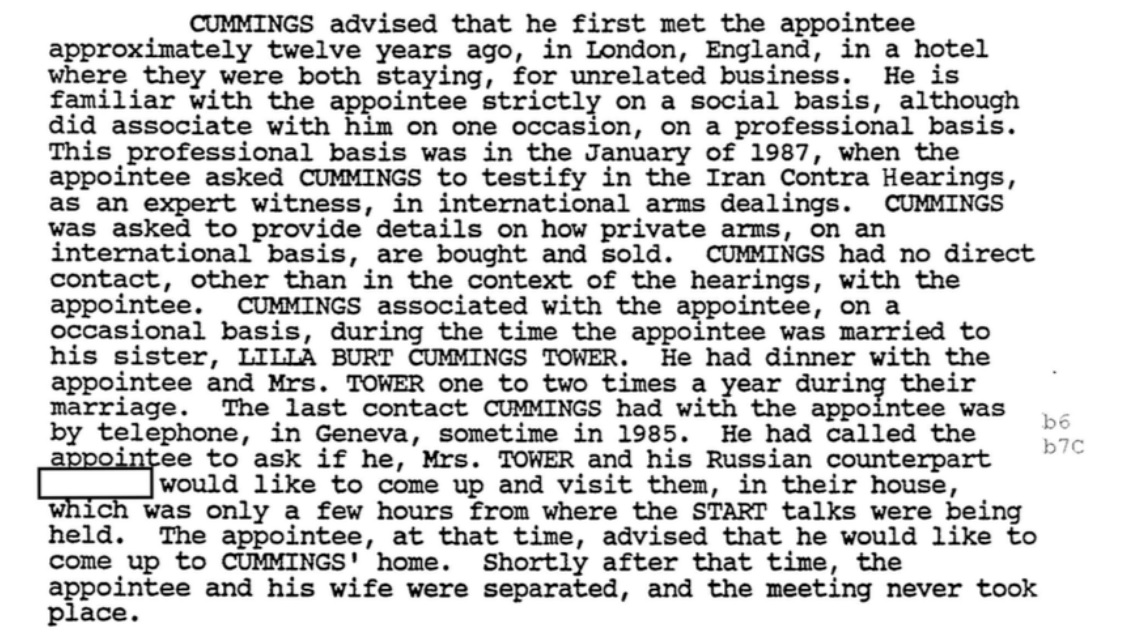 The interview doesn’t make it clear if Cummings testified or not, but any testimony he gave hasn’t been made public. Nevertheless, his name does appear in the Iran-Contra hearings, including at least one statement that directly implicates him. To understand that and Cummings’ involvement, it’s necessary to take a step back and examine his career as a CIA employee, agent, and arms trafficker.

Cummings’ early history is a bit murky, particularly his apparent service in World War II. What’s not unclear, however, is his longtime association with CIA. Cummings’ was officially hired and employed by CIA in 1950, during which time he was one of their most prodigious arms traffickers. Describing his work for the Agency, the New York Times said that while “masquerading as a Hollywood producer buying guns for the movies, he snapped up $100 million worth of surplus German arms on the cheap in Europe and shipped them to Chinese Nationalist forces in Taiwan.” When he left the Agency’s direct employment, however, he didn’t abandon his Agency ties or his career in arms trafficking.

Exactly how Interarmco (AKA International Armament Corporation AKA Interarms AKA ARMCO) was founded is a matter of slight discrepancy. The most common version of events is that Cummings himself founded the company, however one CIA document states that while he was involved from the beginning, he didn’t gain controlling interest until later. This document states that Cummings became the principle agent in 1954 and assumed sole ownership in early 1958. Another document refers to a different arms trafficker, William Stelz, incorporating the company about twenty years after it was allegedly founded. 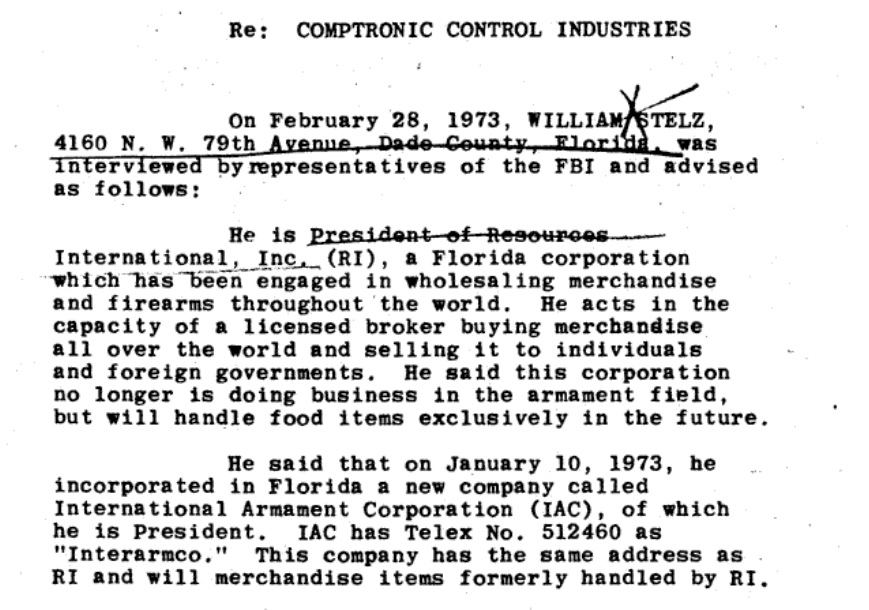 What’s undisputed, however, is the company’s longstanding association with the Agency. When the United States still supported Fidel Castro, it was through Cummings and Interarmco that Frank Sturgis acquired large numbers of weapons. According to Sturgis’ testimony before the Rockefeller Commission, he thought it was a “private enterprise” (words frequently repeated in the Iran-Contra proceedings to describe similar weapons transfers) but later learned the owner was a CIA agent. 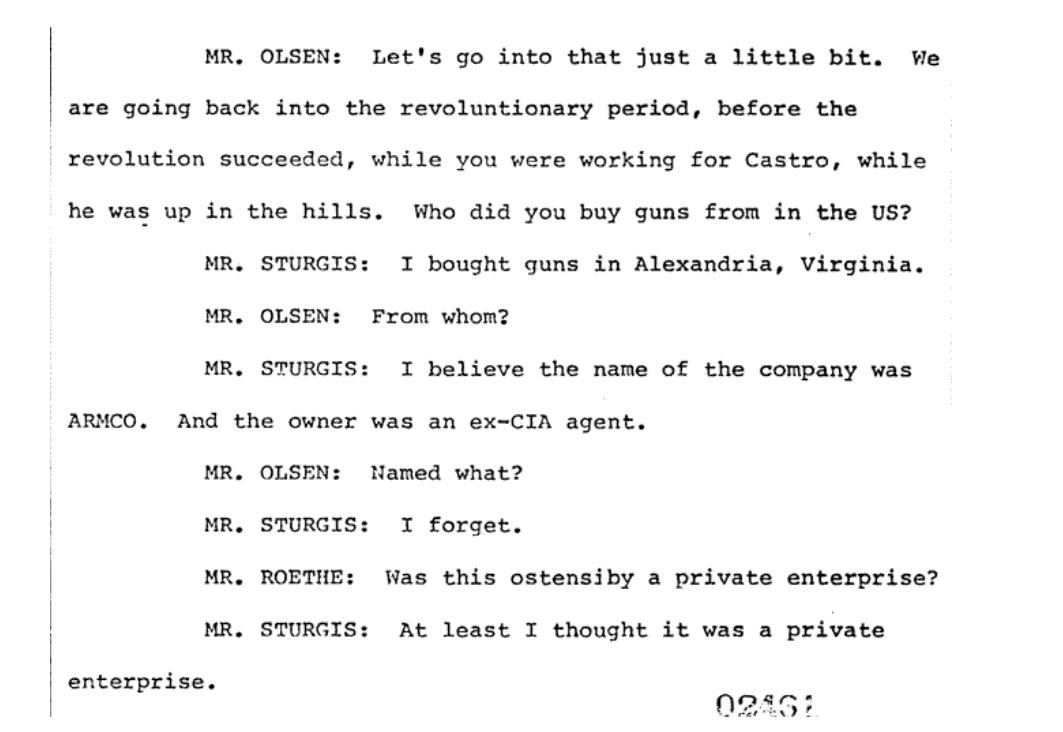 Like many other CIA-connected operations, including Iran-Contra and other projects involving Interarmco, this was to be limited to logistical and financial support from the Agency, along with advice. As the CIA dispatch announcing and describing the AMWORLD project, the purpose of this is to be able to deny CIA’s (KUBARK) involvement, “no matter how loud or even how accurate reports of [American] complicity may turn out to be.”

As late as 1973, the Agency’s relationship with Interarmco was of considerable interest to Congress. During William Colby’s confirmation hearings, Congress asked about the Agency’s relationship to companies like Air America, Southern Air Transport, and Interarmco. The response for all three of those companies was deleted from the public versions of the testimony, and Air America and Southern Air Transport are both generally considered to have been CIA fronts or proprietaries (although the definition of the latter is too mercurial to discuss here).

The CIA and the Cult of Intelligence, released the same year, also asserted the company’s importance to the Agency, stating that

“CIA funds and support undoubtedly were available to it at the beginning. Athough Interarmco is now a truly private corporation, it still maintains close ties with the agency. … Interarmco and similar dealers are the CIA’s second most important source, after the Pentagon, of military matériel for paramilitary activities.”

This wouldn’t be the only time that Cummings would “get away” with something. General Secord let slip a hint of Cummings’ involvement in Iran-Contra when, during the Iran-Contra hearings, he thought a reference to Colonel Dan Cummings relating to arms transfers referred instead to Sam Cummings. More significantly, Lt. General Robert Schweitzer, who had held senior positions on the NSC and in the Pentagon, named Cummings as having been involved in the transfer of arms during the same hearings. The full context of this, however, remains redacted. 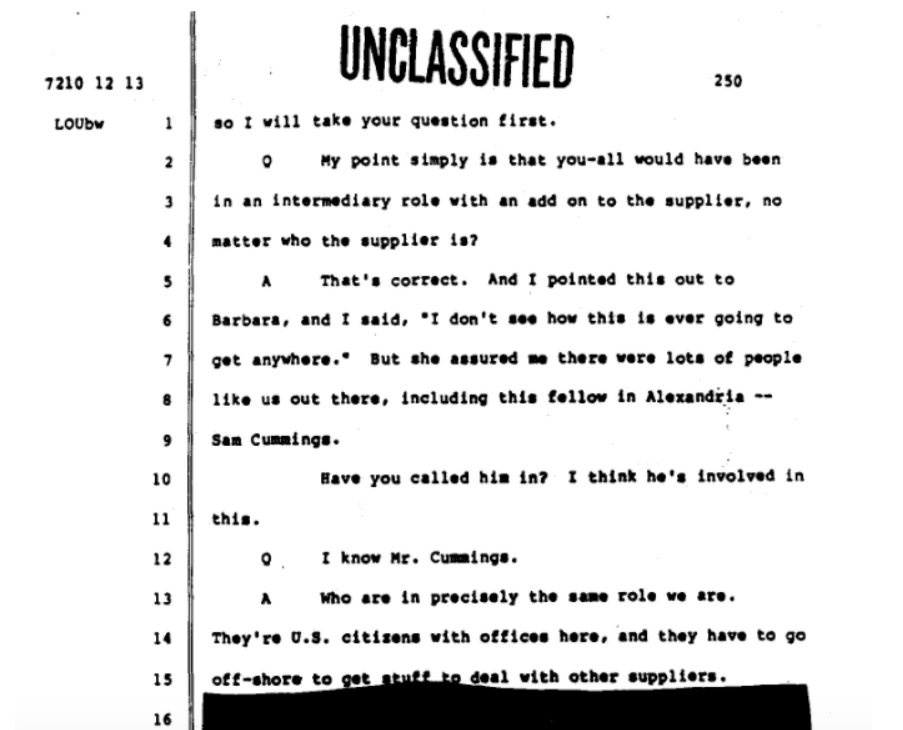 In light of this, it’s unforgivable that Senator Tower never disclosed his relationship with Cummings or had Cummings testify publicly. More significantly, it’s impossible to expect Cummings to have thoroughly investigated a matter that implicated his brother-in-law in illegal CIA gun-running. Even if Senator Tower had made the information known, it was a conflict of interest that would make him unfit to investigate the matter by any reasonable standard.

Tower’s background check is embedded below, and the rest can be read on the request page: