The Department of Justice appears to have retroactively declared that 98% of the FBI file on the journalist Danny Casolaro was and still is missing, despite the FBI seeming to say they had found it.

Having previously released only a handful of documents which indicated the FBI misled Congress about investigating Casolaro’s suspicious death, with other documents from the DOJ hinting at interference and a cover-up, the DOJ has rewritten the FBI’s explanation for not releasing 1,350 pages from Casolaro’s FBI file. Despite the FBI having twice written that the files were found, the DOJ now says that the files are missing and always were. As the chain of events appear to defy explanation, they are offered as-is and without an attempt to explain.

Previous FOIA requests for Casolaro’s file had resulted in a clearly incomplete preprocessed release, despite requesting new files. Despite proof that more than three requesters had recently asked for the file from the FBI, the Bureau had failed to honor the DOJ’s “rule of three” by posting the materials on their website. On February 19th 2016, a new request was filed for Casolaro’s FBI file,

“specifically requesting all previously unreleased documents, as well as a cross-reference search for Alan David Standorf, Inslaw, PROMIS, and Main Core. Please also include any records created or received by the FBI relating to the investigation of his death in Room 517, Sheraton Hotel, Martinsburg, West Virginia.”

On March 9th, the FBI acknowledged the request. On March 17th, the FBI responded stating that they had “located approximately 1,380 pages of records potentially responsive” to the FOIA request. The Bureau requested $40 for duplication charges. After receiving assurances of payment, the Bureau put the request in the backlog. On June 7th, they again affirmed that “the FBI located approximately 1,380 pages.” A month later, it was still waiting to be assigned to an analyst.

On March 24th 2017, the FBI finally responded with a 29 page release of documents. According to the Bureau, only 34 pages had actually been reviewing, leaving approximately 1,350 pages unaccounted for. 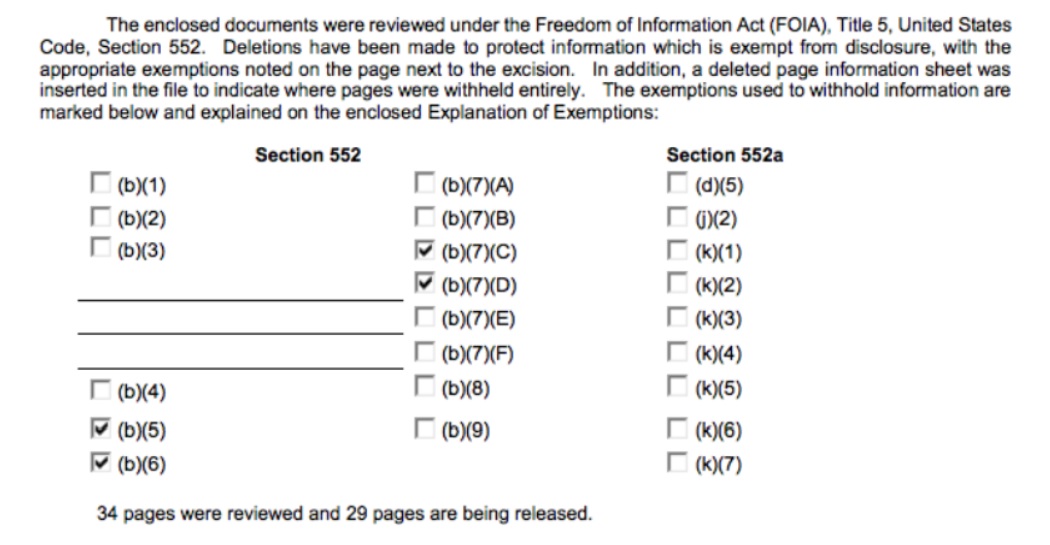 An odd explanation was offered below the signature of the responsible FBI Section Chief: some materials “were found to be responsive to another subject in your request letter.” Since those pages were apparently not reviewed by the Bureau, I appealed the determination that they weren’t responsive since that decision seemed to have been made without reviewing them.

In an undated response delivered in an email attachment on July 7th, the DOJ upheld the Bureau’s release while appearing to change the explanation for why material wasn’t included: the FBI hadn’t actually found it. The materials had apparently been missing all along, and despite searching again after I filed the appeal, the FBI was “still unable to locate them.” The DOJ Associate Chief then adds that the FBI had “not used any exemptions to withhold these records” but that it simply couldn’t locate them. The appeal filed did not mention the use of any exemptions to withhold materials, though according to the FBI five pages had been withheld on the basis of exemptions.

The FBI’s standard practice is to notify requesters when materials were identified in the index but couldn’t be located, as the DOJ now asserts was the case. Instead, the FBI wrote twice that they had located the pages, then indicated that they weren’t reviewed while stating that some of the records were non-responsive cross-references. Separate requests have been filed and initial responses received for each of the cross-referenced subjects, except Main Core, with the missing page count not matching up to any of the responses. A new request has been filed for FBI records on Main Core.

In the meantime, you can read Congressman John Porter’s letter to the FBI regarding Casolaro’s mysterious death below or other articles relating to Casolaro and the PROMIS affair here.