The “Halloween Massacre,” the most horror movie-sounding thing to ever happen to the Central Intelligence Agency, was a bureaucratic nightmare that pushed out the Agency’s most senior employees. CIA officers were so outraged at the “massacre” that they reportedly responded with everything from screen-printing protest shirts, leaving graffiti in Agency buildings and even cussing out the newly-appointed CIA Director Stansfield Turner (via telegram).

MuckRock has put together a brief guide to the affair, using clippings from the Agency’s archive.

The events of the Halloween Massacre can be traced to August 1977, when CIA’s leadership began sending out memos encouraging people to retire by offering them full benefits. 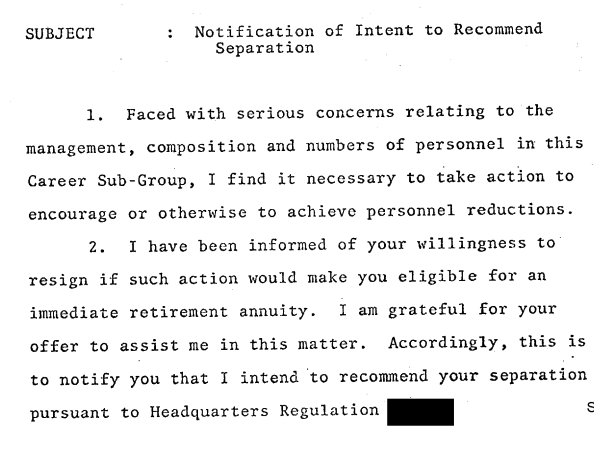 This ultimately didn’t cut the Agency’s overhead enough, leading Turner to send a curt memo (reportedly only 70 words) to slightly over two hundred employees, informing them that their service would be terminated. (One newspaper article reporting this also noted that the Agency didn’t have enough staff members in their FOIA office.) 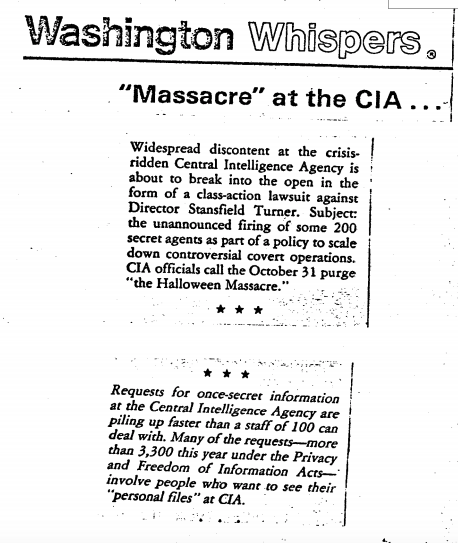 Halloween would become a harsh anniversary for the Agency, one they would attempt to compensate for in subsequent years. 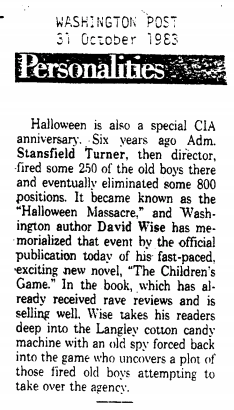 The backlash was virtually unprecedented. Several outlets reported that graffiti critical of Turner began to spring up around Langley. Years later and in a different context, the Agency said that this was the sort of tactic that appealed to “intellectual dropouts, other misfits, and tantrum-throwing adolescents.” 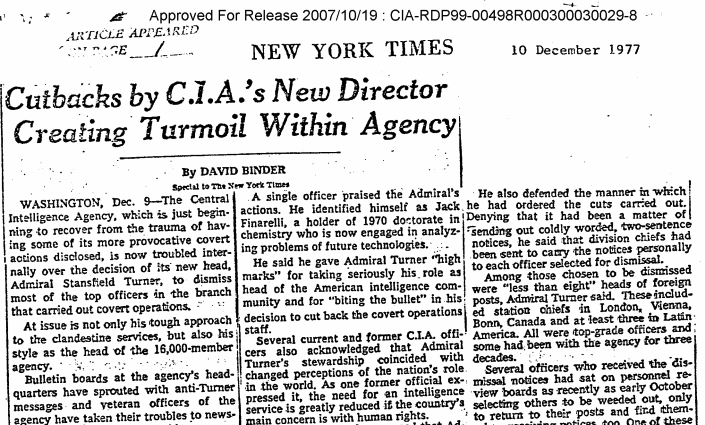 As JPat Brown pointed out, one particularly angry station chief reportedly responded to the Director with a two word expletive beginning with “f” and ending with “u.”

The purge ultimately cut CIA’s staff by a fifth. 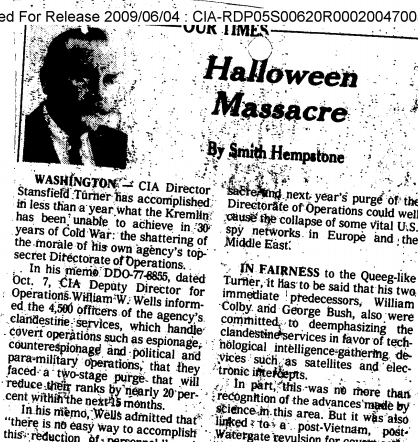 When word began to spread that Turner had cut the staff because technological advancements meant that fewer people were needed, he was quick to correct the record. This selfless correction ultimately made him look worse, raising the question of whether it was a question of honor or an overzealous desire to protect the Agency’s sources and methods. 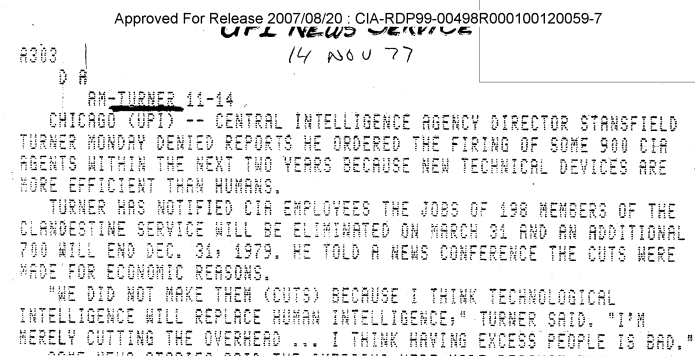 The protests against Turner reportedly got to the point where people printed out shirts with slogans bashing him as the “Arm-chair Admiral.”

In some cases, jobs were eliminated through improved efficiency. In others, it was pure “attrition.”

Ultimately, the matter hurt morale so much that the White House reportedly had to intervene with the Agency’s management.

The backlash also resulted in at least one minor Congressional inquiry.

Years later, it would be included in a list of how the US’ internal security was “destroyed.”

In terms of the CIA’s bureaucratic history and how it’s reacted to it’s Directors, this is one of the Agency’s more important and dramatic episodes. If nothing else, questions linger about why this set of layoffs - which was hardly unique in terms of CIA’s history - provoked such a strong and memorable reaction. MuckRock has filed several new FOIA requests to glean new bits of information about this affair. In the meantime, you can read Turner’s statement regarding and defense of the “Halloween Massacre” below. You can also look through CIA’s archive for additional bits of information. MuckRock has put together a search of probable hits. Let us know if you find something interesting via the form below!