According to many and the popular consciousness, Operation MOCKINGBIRD was a propaganda program in which CIA would utilize journalists as assets. While such efforts certainly existed, and some were quite widespread, there is only a single source for the name - Deborah Davis’s book, Katharine the Great: Katharine Graham and Her Washington Post Empire. It’s unclear from the text who Davis’ source for the name is, though she sources several details of the effort to an unnamed “former CIA analyst who worked with MOCKINGBIRD.” 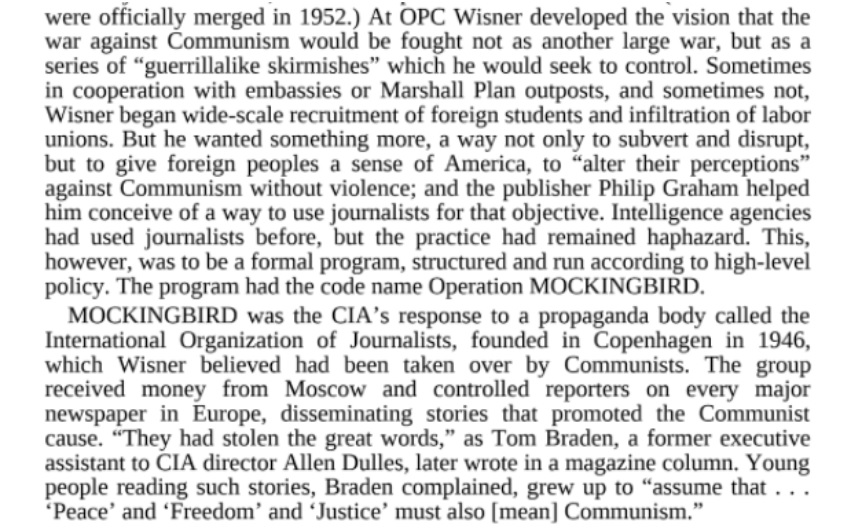 There is no official record of MOCKINGBIRD being officially used as a cryptonym for a propaganda program. There is, however, a growing paper trail of documents about a Project MOCKINGBIRD disclosed as the third item in CIA’s Family Jewels. According to the Family Jewels, MOCKINGBIRD was a surveillance program targeting two newsmen who had been receiving a considerable amount of classified information. They had received so much classified information, in fact, that they were unable to use it all and passed some of it on to other journalists.

Although the Family Jewels do not name the journalists, an unsent memo from a CIA Security File identifies them as Robert S. Allen and Paul J. Scott.

While the Family Jewels do name the two journalists as being the target of surveillance at one point, the dates provided are off by about a year for the dates of Project MOCKINGBIRD, a contradiction which created some doubt about whether they were the targets of the program. The same memo dismisses this sort of warrantless wiretapping as only being a problem to “hostile observers or to someone… with a special kind of motivation.” According to this section of the Family Jewels, Attorney General Robert Kennedy was responsible for Project MOCKINGBIRD by insisting the CIA Director investigate the journalists, though later memos reveal CIA had no formal approval from the AG. This insistence appears to have come shortly after Federal Bureau of Investigation Director J. Edgar Hoover declined to covertly investigate, saying that it would “become known and I understood the President does not want it to become known.” 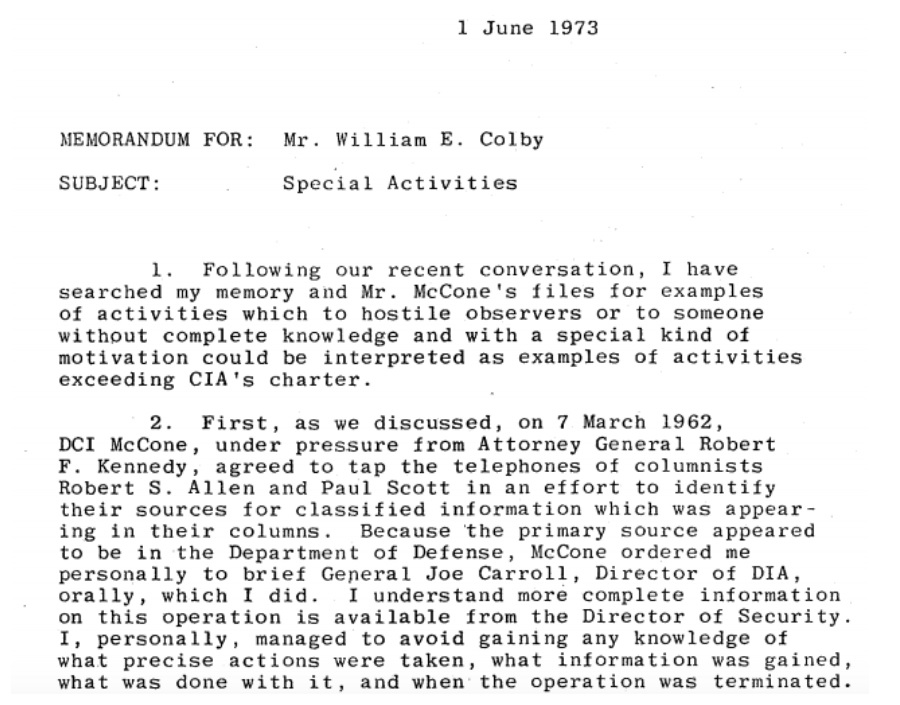 A recently released copy of CIA’s history, John McCone as Director of Central Intelligence, 1961-1965, confirms the unsent memo’s identification of the journalists. Much of the section of the history dealing with MOCKINGBIRD remains redacted, including one already declassified portion of the Family Jewels describing the information received as “including Top Secret and Special Intelligence.” 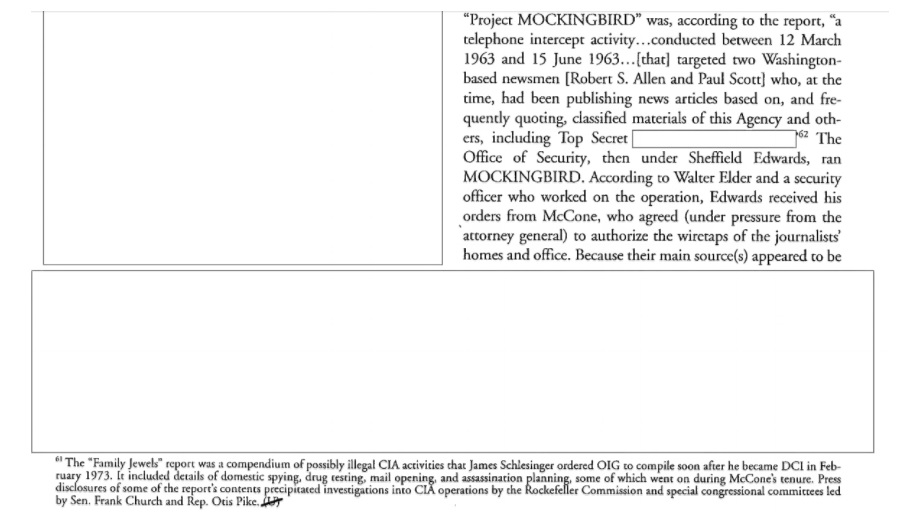 Beyond confirmation of the identities of the targets of Project MOCKINGBIRD, the McCone history adds little outside of commentary about the difficulty of catching leakers in the act. 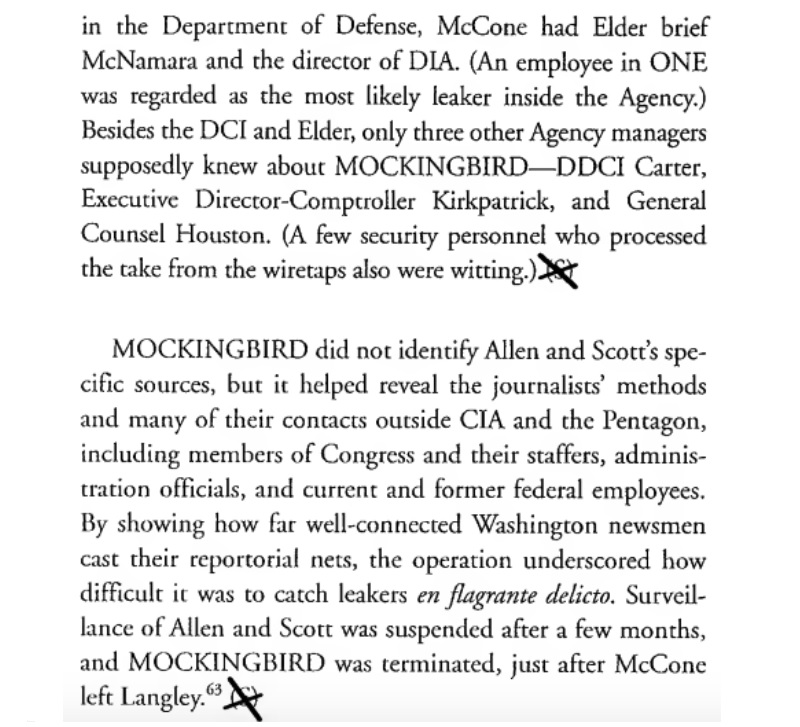 This difficulty is briefly addressed in the MOCKINGBIRD file, which discusses their ability “to obtain warnings or guidance regarding possible threats to their activities.” Several examples are discussed, including learning about a Defense Intelligence Agency investigation, learning that one of their contacts was surveilling them for CIA. 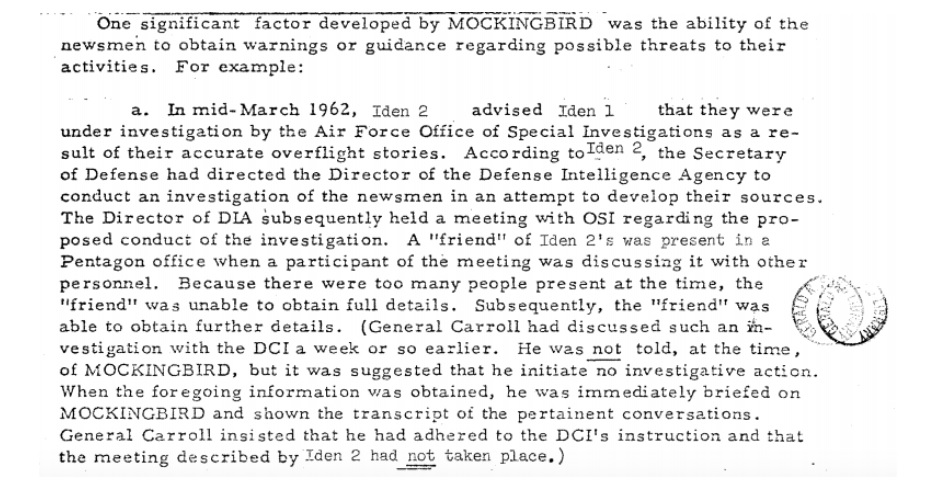 The new release of documents relating to MOCKINGBIRD and some surrounding events sheds new light on the program and addresses the contradiction in the Family Jewels. The file provides some contextual information that confirms the true dates for MOCKINGBIRD’s period of operations. Perhaps most notably, and directly, the file confirms that the Rockefeller Commission Report was aware of MOCKINGBIRD but failed to address the warrantless surveillance of journalists in its report, which referred to domestic surveillance in general terms. 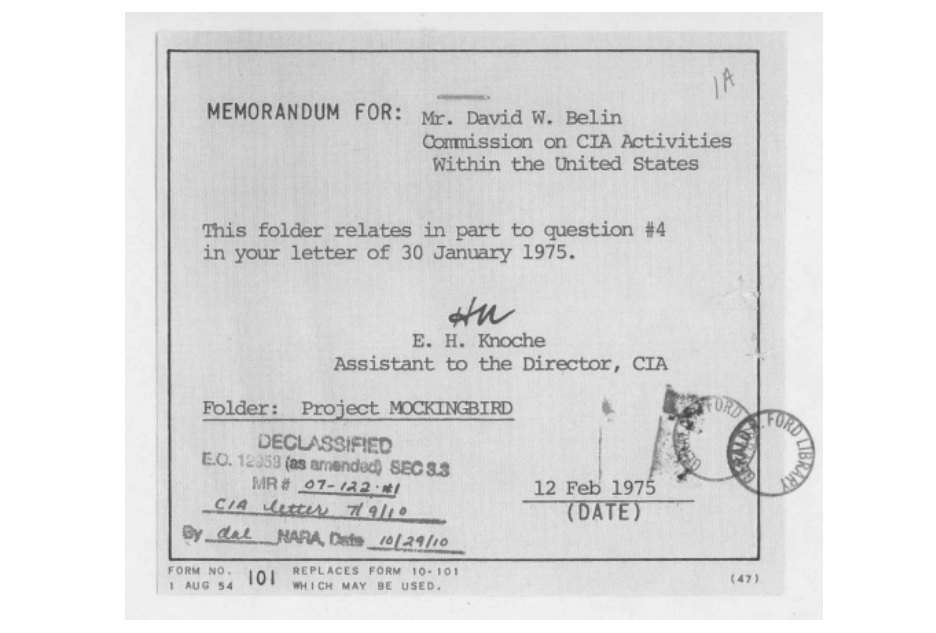 Like most other releases, this file redacts the names of Allen and Scott. In addition, it not only repeats the confusion about the dates of the project - it ultimately clarifies them. According to the file, Project MOCKINGBIRD was active during 1963 but was authorized in March 1962. More significantly, it identifies the source of this confusion as being a single EYES ONLY memo. The actual dates of the surveillance in 1963, however, appear to come from the logs themselves.

The memo in question is included in the file, providing the same 1962 dates cited in the Family Jewels as applying to Scott and Allen’s surveillance and explicitly associating those dates with Project MOCKINGBIRD. More significantly, a reference in the memo confirms that it has the year wrong. 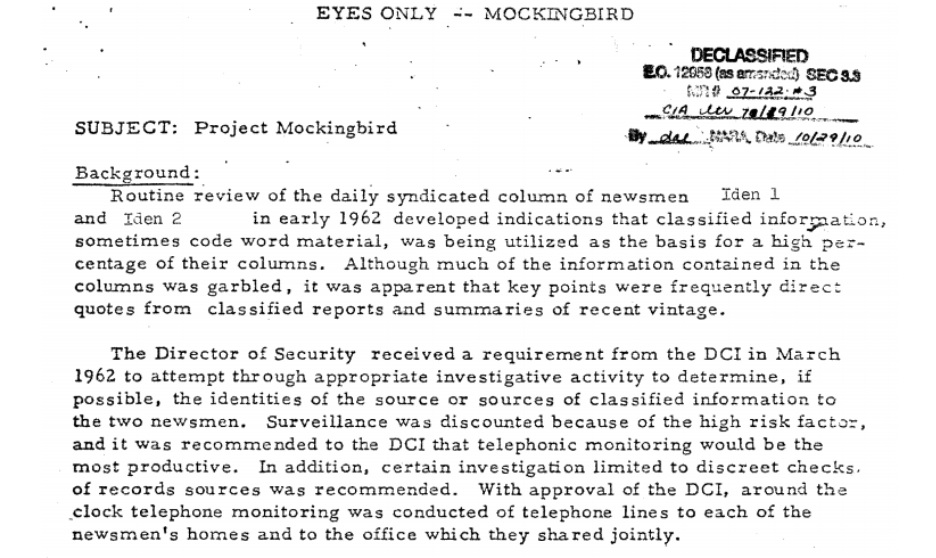 From CIA’s inception until July 9th 1963, the Agency’s Director of Security had been Sheffield Edwards. This leaves no doubt that Project MOCKINGBIRD’s surveillance was active during 1963, not 1962. 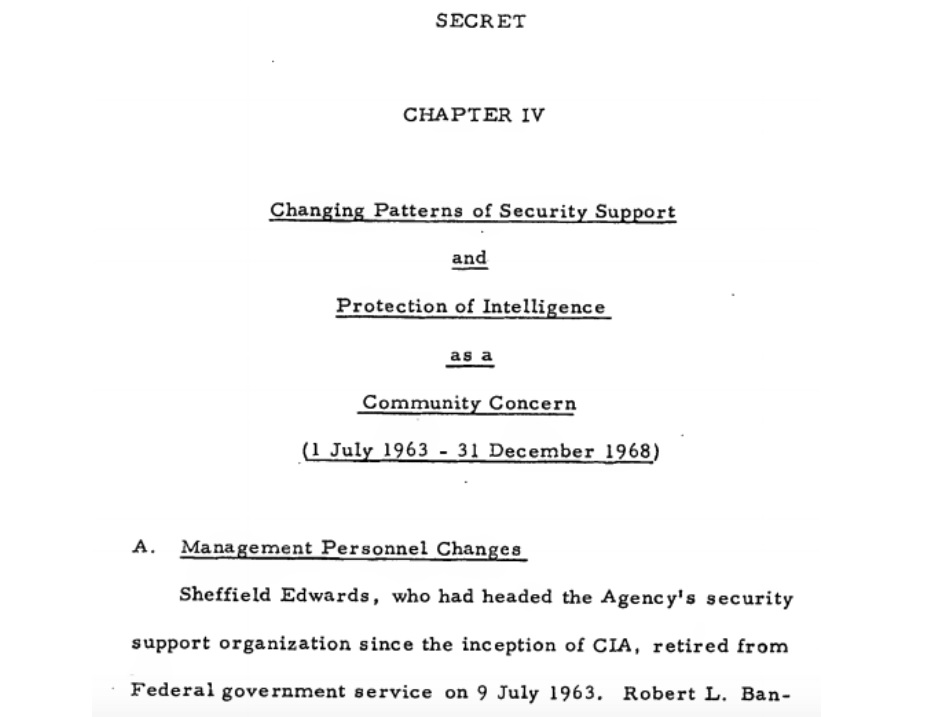 What is left less clear by the EYES ONLY memo is the question of authorization. According to the unsigned and undated memo, the CIA Director “subsequently” briefed the AG on Project MOCKINGBIRD and tasked the Office of Security with carrying out the program.

The Family Jewels with the incorrect dates, however, says that the Attorney General tasked the DCI with carrying out the Project. This claim is repeated in the synopsis of Project MOCKINGBIRD provided to the Rockefeller Commission. 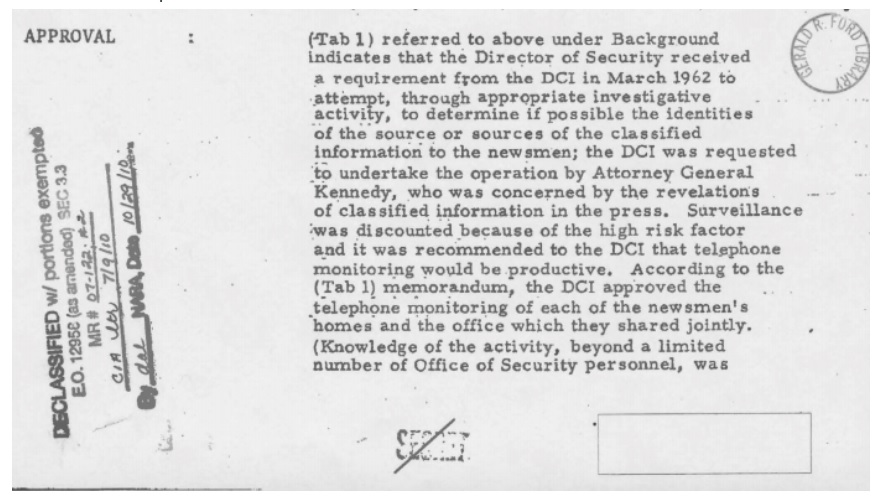 The question of the program’s authorization is complicated by a CIA memo from December 31, 1974. The memo, written by then-Acting Inspector General Scott Breckinridge, notes that CIA had no record of any “formal approval by Attorney General” Kennedy. Rather than conclude that the approval didn’t exist, Breckinridge wondered if the Department of Justice might have a copy of it. The memo also queried CIA’s General Counsel about whether MOCKINGBIRD raised the “question of surveillance of Congressmen” who are contacted by someone else under surveillance.

The question of the approval and authorization for Project MOCKINGBIRD remains unresolved based on the contradictory documents, some of which are demonstrably incorrect. What’s unambiguous is the results of the short project. According to undated EYES ONLY memo, “Project MOCKINGBIRD was extremely productive” in terms of identifying the journalists’ sources. Perhaps more significantly, the Agency determined that certain inaccuracies in the reports published by the newsmen weren’t the result of drunkenness, as they had initially concluded, or sloppiness as one might presume, but rather that it appeared to have been deliberately garbled “to disguise the source.”

According to the Project, when the journalists were unable to disguise the identity of one of their “wide-ranging” sources they would simply not use the information, much of which “was of a partisan political nature” or “seeking a ‘plug’.” 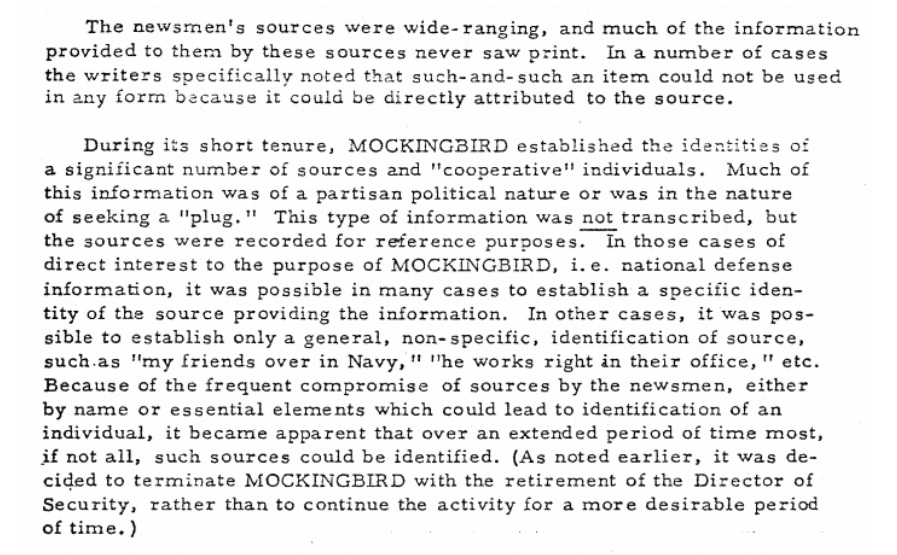 In terms of identifying the sources leaking information to the journalists, Project MOCKINGBIRD was a success and likely would have been even more successful had it continued on. It appears from the EYES ONLY memo that the Agency recorded telephone conversations where Speaker of the House John McCormack either provided them information or had the information attributed to him. In addition, other members of the Senate and House of Representatives were caught leaking information in recordings by CIA, along with their staff members. Among other sources identified were White House staffers and at least one staff member in the office of Vice President Rockefeller, who would not mention Project MOCKINGBIRD in his report.

Where Project MOCKINGBIRD was less successful, however, was in identifying their source within CIA. While the Agency concluded that the source was most likely someone in the Office of National Estimates, they were unable to identify the “Mr. X” of the case.

Nevertheless, CIA identified at least one individual from CIA who the newsmen had been in touch with. Another CIA contact was reportedly both friendly with them, and performing surveillance on them that operated in tandem with, but separate from, Project MOCKINGBIRD. 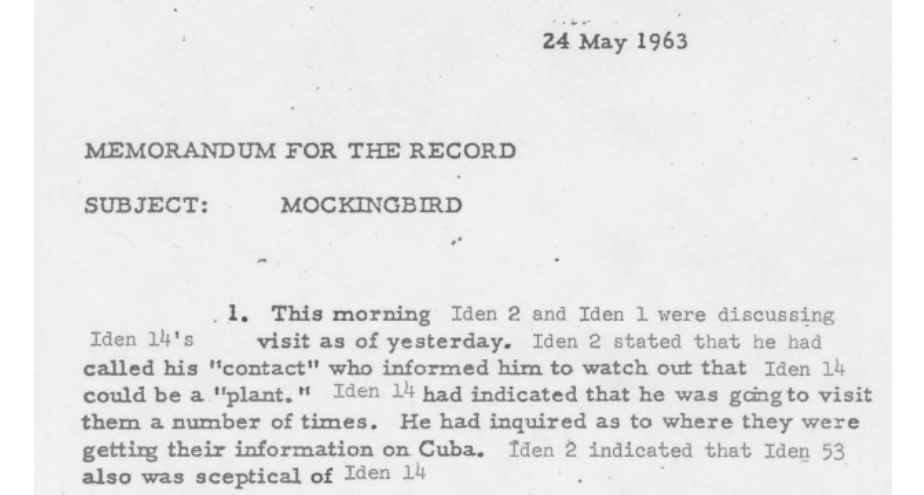 The file sent to the Rockefeller Commission also confirms that Project MOCKINGBIRD was connected to previous efforts, as it included memos from 1961 about their activities. 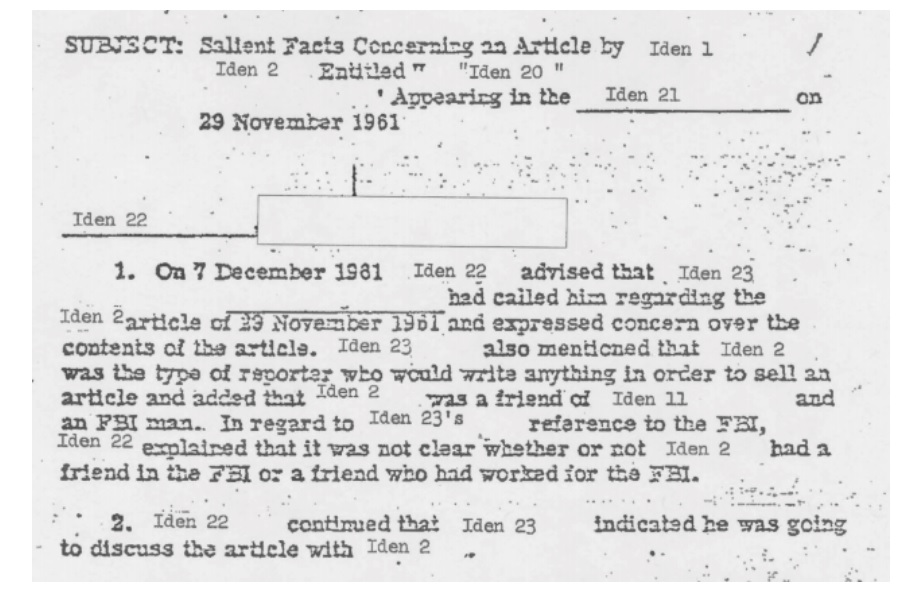 The 1961 memo has several interesting revelations, including the topics of several articles one of the newsmen was working on at the time. The first article would accuse CIA of contributing money to a U.S. political campaign “to defeat a congressman.” The second would accuse someone associated with CIA of funding Owen Lattimore’s trip to Outer Mongolia. While this charge currently remains unsubstantiated, a record in CIA’s declassified archives makes it seem plausible. The Agency preserved an article discussing a call for Congress to investigate the trip, keeping the newspaper article classified for nearly 40 years. The article doesn’t mention CIA - only the Senate and the State Department. The third article would deal with accusations of Communists in CIA. Significantly to a largely separate question of whether Robert Allen was a Soviet agent is one of the newsmen becoming “shaken” when they heard Radio Moscow’s playback of his work.

Another memo expands on this some, connecting it to Socialist financing and the newsman “doing [a] disservice to this Government and the Intelligence Community.”

For CIA, the most alarming article seems to have been the third and the accusation that there was Communists in CIA. The initial alleged claim of twelve Communists within the Agency was reduced to eight, and after CIA was told that the names had been provided to FBI and the House Un‑American Activities Committee they inquired with both, only to find no record of the names having been reported. 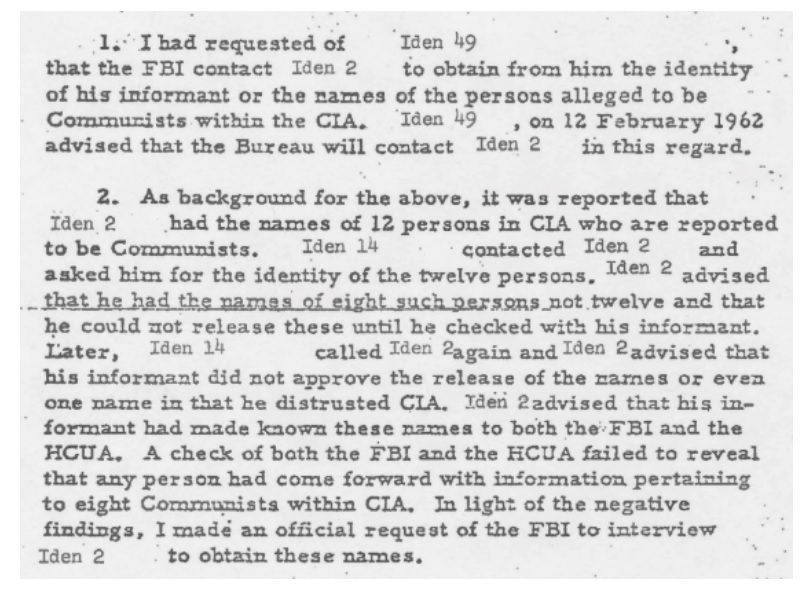 The Bureau then approached the newsmen and received only one name, as the newsmen wanted to wait to see what happened before providing the other names. 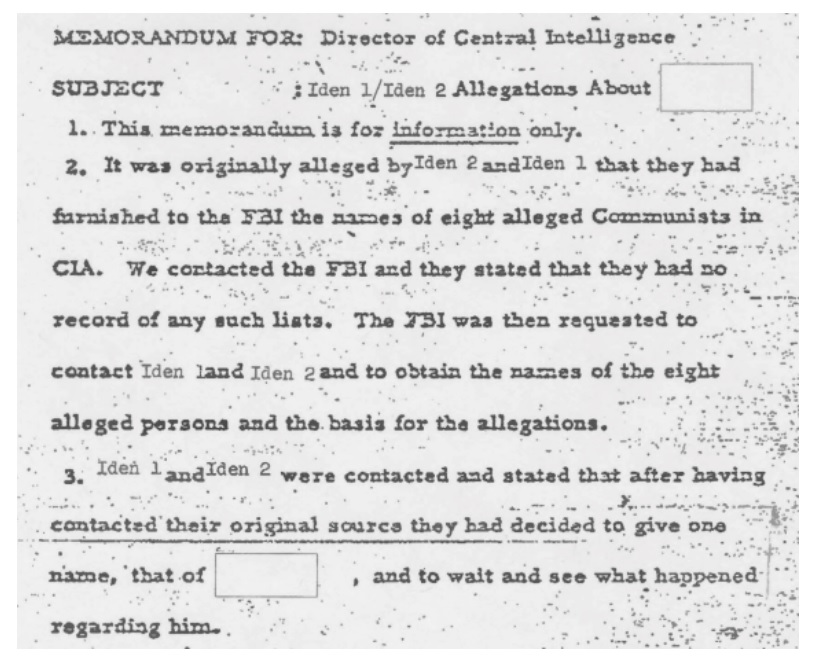 The subsequent sections of the memo are entirely redacted, except for a concluding paragraph that notes that the person in question “has a number of enemies in the Intelligence Community.”

In addition to Project MOCKINGBIRD having its roots in earlier concerns (some of which are spelled out in documents elsewhere), the results of the Project continued to be investigated for sometime after the surveillance itself ended. A 1964 memo to the Director of Security is included in the Project MOCKINGBIRD file, discussing further attempts to identify the sources of the newsmen. 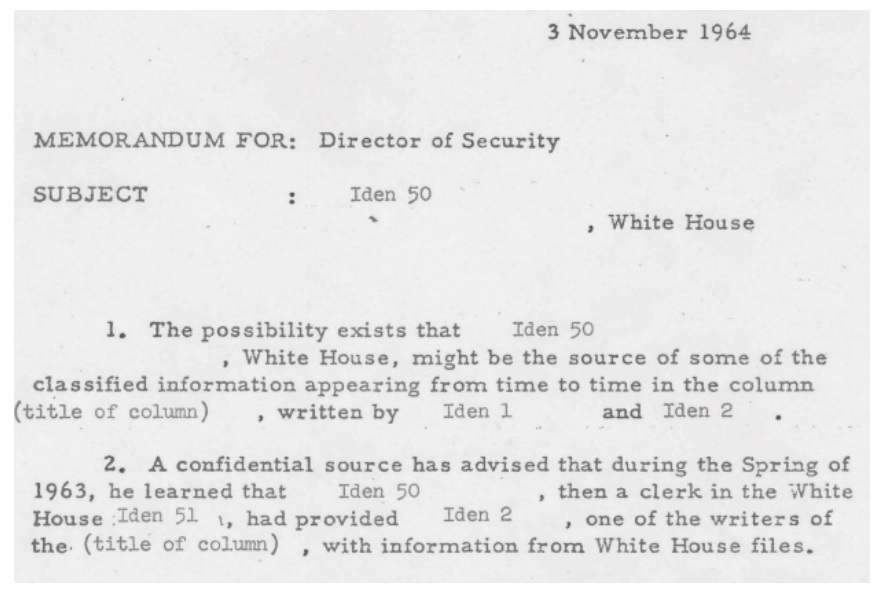 While many old questions still remain about Project MOCKINGBIRD and CIA’s interest in the newsmen, the file released to MuckRock answers several important questions. It addresses the issue of the program’s dates, and confirms that the erroneously dated reference to the newsmen in the Family Jewels does describe Project MOCKINGBIRD. It confirms the Rockefeller Commission’s choice to remain silent on the Project, and it confirms the breadth of the sources used by the newsmen and that the Project MOCKINGBIRD surveillance unintentionally resulted in telephone surveillance of members of Congress, potentially including the Speaker of the House. The file raises a new question, however: who authorized the program? Was Attorney General Robert Kennedy merely briefed on the matter, or was he the reason it existed? Was there ever any formal approval? Why did CIA include a mention of the AG being responsible for the project in the 1973 Family Jewels and how can that be reconciled with their having no record of the AG approving the project in 1974?

Perhaps most interestingly, the file reveals that Project MOCKINGBIRD was deliberately discontinued to coincide with the retirement of the Director of Security and that its alleged approval was verbal, with the Agency being unable to find any formal approval of the program or directive from the AG.

A new FOIA request has been filed to learn more about the project. Until the Agency responds to that request, you can read the file below or on the request page.

Emma North-Best sent this request to the Gerald R. Ford Library of the United States of America