While most people with an interest in the history of CIA will have heard of “Operation Mockingbird,” which weaponized the press for propaganda purposes through the “Office of Policy Coordination,” there is another side to the program that’s much less well-known. A declassified memo from 1965 reveals a network of journalists that regularly received intelligence from Ray S. Cline, one of CIA’s senior analysts and at that time the Deputy Director of the Directorate of Intelligence. Several of these journalists were former intelligence officers and were not only involved in information and propaganda dissemination, but other ongoing CIA operations.

Joseph Alsop, for instance, agreed to report on the 1953 Philippine elections for the Agency as cover for gathering information for the Agency. According to Mr. Cline, he met with Alsop whenever the reporter requested it “to discuss international events of interest to him for the purpose of writing his columns, giving him guidance as to my thinking on these subjects whenever it was possible.” These meetings were also held at the request of the Director of Central Intelligence, who preferred for Alsop “to write reasonable columns [rather] than to have misinformation published.”

A 1965 report to the Director makes it clear that the information flowed in more than one direction. According to the report written by Mr. Cline, Joseph Alsop began to provide him with information about Viet Cong strength without asking for his view on it.

In addition to identifying a number of journalists involved in this CIA network and providing some basic information about their activities, the memo praises the leaks and the use of the press to manipulate the public’s perception of the Agency in the context of “impaired public confidence.”

As part of giving the journalists information that would help further the Agency’s goals and improve public perception of it, Ray Cline gave extensive briefings based on briefings given to the National Security Council by the Director of Central Intelligence. One such briefing was given to Stewart Alsop, the brother of Joseph Alsop and a former officer in the Agency’s World War II predecessor, the Office of Strategic Services. “at the Director’s instruction” and excluded military weapons data. The Director similarly instructed Mr. Cline to maintain similar briefings “without disclosing classified information” to Joseph Alsop.

The memo repeatedly states that all the information provided to the press was either unclassified and not sensitive, or “general analysis.” One such example of general analysis, given to Time Magazine correspondent Jess Cook, remains a secret.

While the information was given to the press for publication, even a brief description of that information and analysis is redacted because it would “reveal the identity of a confidential human source, a human intelligence source, a relationship with an intelligence or security service of a foreign government or international organization, or a non-human intelligence source; or impair the effectiveness of an intelligence method currently in use, available for use, or under development.” Unfortunately, this is a classic example of the Agency improperly attempting to use a broad exemption to withhold information - Mr. Cline explained that he provided the information so that Jess Cook and TIME would give “a reasonable treatment of [the subject].” The information was explicitly intended for publication, meaning it was already revealed to the public.

The journalists identified in the memo as having been a part of Ray Cline’s network are: 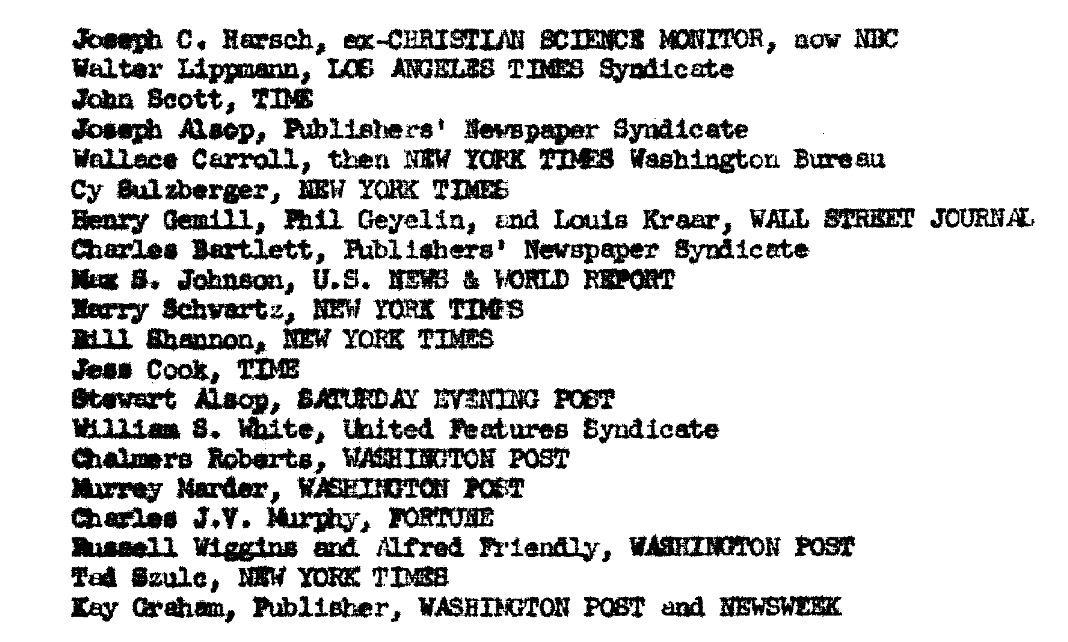 Future articles will explore the background and activities of these journalists along with their contacts with CIA. In the meantime, you can read the memo below.