Sir Robert Maxwell is mostly remembered as the Czech-born British media mogul who owned the Daily Mirror and was a Member of Parliament. Less remembered is that he was an alleged spy for both the U.K. and Israel, and was accused of ties to the Mossad abduction of Mordechai Vanunu - accusations which he denied shortly before his apparent suicide. All but forgotten, however, are his alleged ties to the PROMIS affair, thanks in no small part to the FBI withdrawing his file from public view. The withheld materials describe Maxwell accessing an NSA database with information on tapping government databases, which is precisely what U.S. and Israeli intelligence are accused of modifying PROMIS to do.

According to FBI documents first obtained by William Hamilton of Inslaw Inc., the original creator of the PROMIS software which was stolen by the Justice Department, the FBI was contacted by employees of Sandia National Laboratories regarding Robert Maxwell and his company’s access to government databases based on information from the National Security Agency. As a result, the FBI opened a counterintelligence investigation to the matter. According to court documents and a FOIA appeal filed by William Hamilton and Inslaw, portions of these documents were suddenly reclassified by the FBI in response to Inslaw’s FOIA request.

Hamilton’s appeal letter to the DOJ, later entered by Inslaw into the court record by Inslaw as Exhibit A, alleges that the FOIA request had originally been assigned to FBI FOIA specialist Karen Browning. Inslaw alleged that on November 19, 1993 they had “learned from Ms. Browning that the Inslaw FOIA had been taken away from her and placed on a section chief’s desk.” The section chief apparently then assigned it to FOIA specialist Sue Knopka, which due to poor communication from the FBI, Inslaw apparently assumed was the FOIA section chief on whose desk the FOIA request had been placed. On December 9th, Ms. Knopka apparently informed Inslaw that her review had been completed, and her work was being re-reviewed by others (which is not uncommon). Inslaw alleged that according to the document’s marginalia, much of the material was declassified on December 13th, and re-reviewed on December 21st - at which point portions appear to have been reclassified and re-redacted.

The marginalia appears to confirm Inslaw’s statement, with stamps declaring that the information was “UNCLASSIFIED” on 12/13/92 and “Classified” on 12/21/92, with portions redacted for b7C to protect “personal information in law enforcement records.” Notably, the “personal information” redacted primarily consisted of file numbers responsive to an FBI search and the subject of those searches. 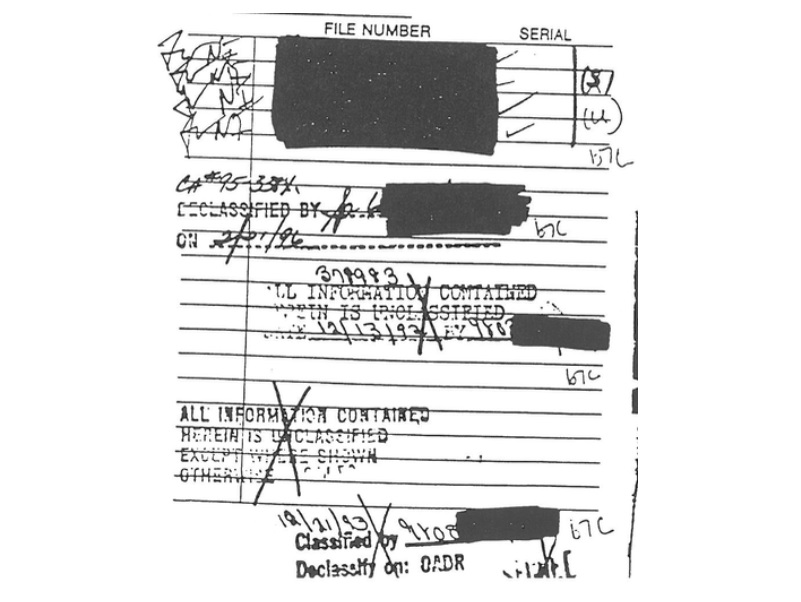 In 1994, Hamilton and Inslaw filed a new FOIA request, for which they received 20 pages. They appealed the subsequent redactions and withholdings, which were later upheld by the DOJ. Nine years later, the materials were re-reviewed and released with a conflicting set of redactions. In these versions of the documents, released in early 2013, all mentions of NSA involvement are redacted. However, the search slips are no longer as redacted - while the subject remains remains redacted - now for privacy per both b7C and b6 - the file numbers are no longer hidden. 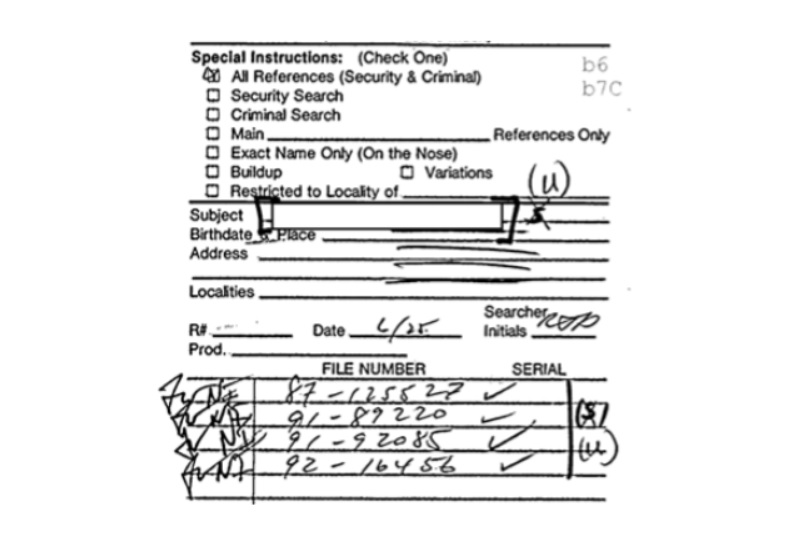 In response to a new FOIA request filed by the author, the FBI agreed to release additional materials on Robert Maxwell to their FOIA reading room, which had previously excluded the materials provided to Inslaw. These documents, reviewed by the FBI in April 2017, are more redacted and have more withholdings than the versions from 1992, 1994, or even just four years prior in 2013. Not only was every mention of the NSA withheld for referral, the entirety of every page which so much as mentioned the NSA was withheld - a stark increase over just a few years prior. Additional details are withheld on spurious grounds, such as the claim that the Bureau is prevented from disclosing the file number and the subject of the file being released, on the grounds that its disclosure “would disclose techniques and procedures for law enforcement investigations or prosecutions … [and] such disclosure could reasonably be expected to risk circumvention of the law.”

This is, of course, sheer nonsense. By the FBI’s own previous admission, the information could not possibly be used in that way. In the 1990s, the FBI had claimed this same information was classified, a status which it later lost. To now claim it re-exempted by statute is simply one more example of excessive classification and withholding of things related to the PROMIS affair. If, however, the FBI stands by the assertion that revealing the information would compromise “techniques and procedures for law enforcement investigations or prosecutions,” then the author welcomes the Bureau’s wrath for deliberately publishing the information from an earlier version.

Relating to the NSA, the FBI withheld eight pages to refer their entirety to another Agency. While the NSA is in no way named in the new release, prior releases have already revealed the NSA’s involvement. Perhaps coincidentally, the eight withheld pages are the eight pages relevant to the PROMIS affair. Of these eight pages, only one page was referred in its entirety a few years before. Prior to that, additional pages were located and reviewed. These do not appear to have been reviewed for either the 2013 or the 2017 release. 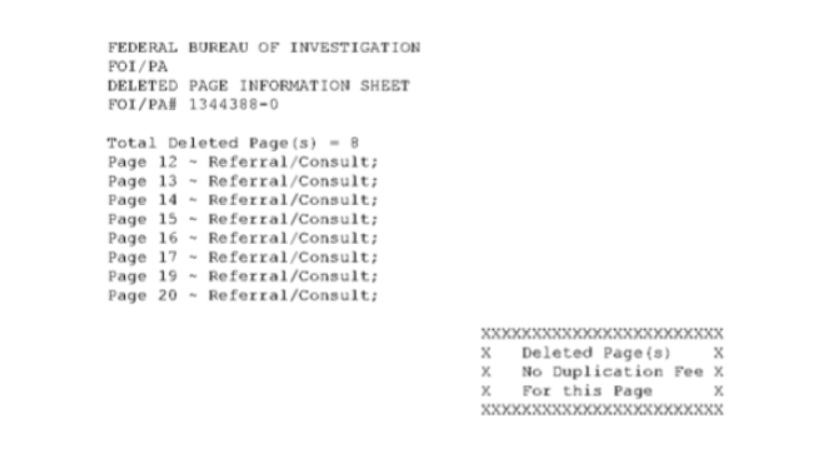 Nevertheless, the prior releases reveal a great deal about the investigation which shine a light on the accusations that Maxwell played a role in Israel’s modification and distribution of the PROMIS software and modified hardware that was being distributed simultaneous to Maxwell’s efforts to globally distribute computers and computer services. As previously discussed, CIA and NSA’s early efforts to exploit commercial online databases dated back to the 1980s. Before even those efforts, Maxwell’s company was working with the U.S. government. According to documents released in CIA’s CREST database, the Agency had been in touch with Maxwell’s company, Pergamon International, about potentially using their services just days before the FBI opened a counterintelligence into them.

While it’s unknown what, if anything, came of Pergamon’s offer to let CIA access its information, either on disk or online, the type of material (foreign patents) being offered to CIA was certainly of interest to the Agency and would have matched its other open source collection efforts.

The FBI opened their investigation after being contacted by employees at Sandia National Laboratories about Maxwell and Pergamon International in response to information the Sandia employees had received from NSA. Their concern was apparently that Pergamon was connected to their systems and to systems in Russia. While the FBI investigated the Russian access and apparently found it to be of no concern, the truly notable part of the file seems to relate to the accusations that are made in the PROMIS case.

According to one of the releases of the formerly SECRET FBI document, Information On Demand, which had recently been acquired by Pergamon International, the databases involved were unclassified, but included “information concerning government and various available means of tapping government information databases.” Considering this is precisely what PROMIS was alleged to have been modified to do and distributed by Maxwell, this information which ultimately originates from the NSA is extremely relevant.

According to the file, the NSA displayed an apparent lack of interest in the matter, prompting the FBI to close the file. 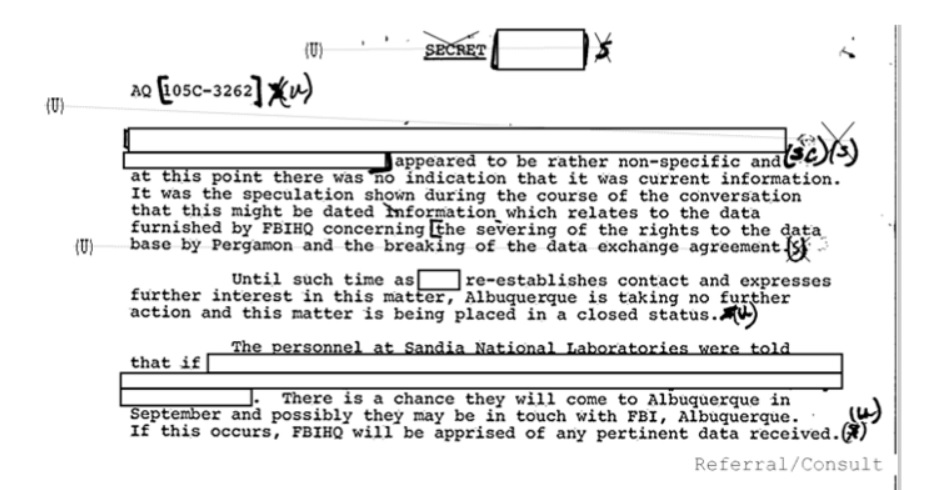 The specifics of the database, of NSA’s involvement and several pages of documents remain classified or otherwise withheld through all releases thus far. It is possible, however, that the Bureau will later release new material with NSA’s approval. Additional requests on PROMIS and Inslaw have been filed with agencies including FBI, NSA and CIA, revealing the existence of thousands of pages of thus far unreleased materials. While FBI says they must wait for NSA’s approval to release some of the documents, William Hamilton of Inslaw has “been contacting NSA twice a year for seven years about the release of voluminous documents on INSLAW and PROMIS which NSA acknowledged having over seven years ago but has repeatedly delayed releasing on the grounds that NSA is waiting for sign-offs from other agencies.” 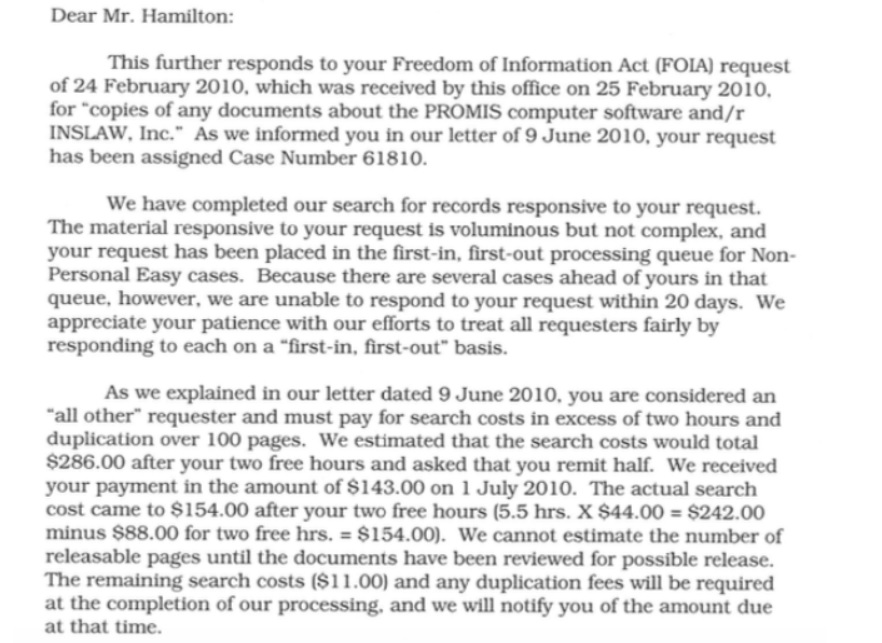 Until additional documents are released, you can compare the different releases here, or read a copy of the FBI’s latest release below.