On September 17th in 1965, an odd memo was sent within the CIA praising nearly a decade’s worth of unofficial briefings with the press. Seemingly out of the blue, numerous contacts between Ray Cline, CIA’s Deputy Director for Intelligence, and the press were suddenly admitted and enumerated. When the memo was first discovered, it was unclear what prompted it, however another, recently unearthed memo implies that it came about because of a threat from a member of the Agency’s private press pool.

The September 17 memo framed the eight years of unofficial press contacts with the Agency’s chief analyst as being conducted for the Agency’s benefit. By improving the press’ understanding and the Agency’s rapport with the press, the memo claimed that Cline had served the Agency’s interests and not his own. The memo offered no explanation for why this was being brought up, except that it might be time to look at “new approaches to methods of restoring diminishing faith in the Agency’s competence.” 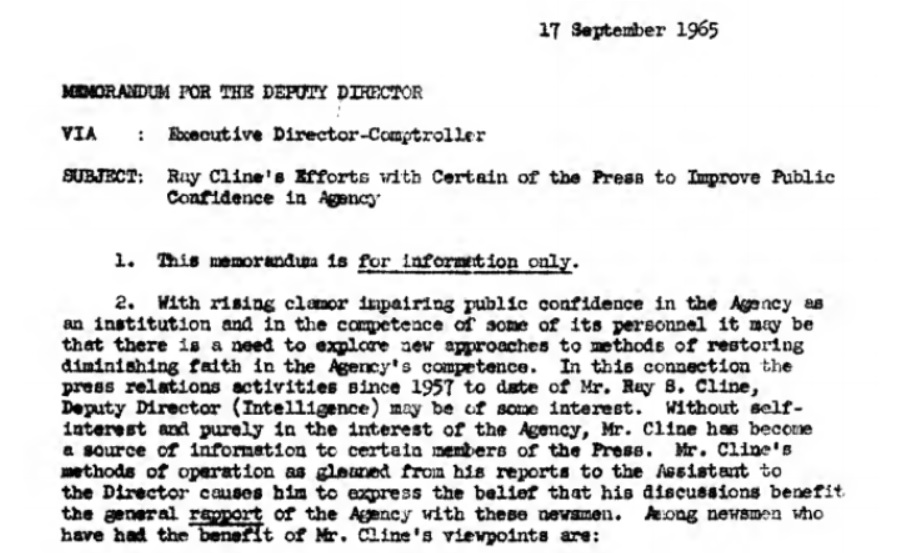 A newly discovered memo from two weeks earlier, dated September 2, suggests an alternative explanation: a reporter had attempted to use his unreported relationship as a form of graymail (blackmail involving secret information) to coerce information from the Assistant to the Director of CIA.

On September 1st, the day before the earlier memo was written, CIA’s Executive Director-Comptroller received a call from the Assistant to the Director. Joseph Kraft, a respected journalist who would later be bugged by the Nixon White House, had tried to get information about Soviet leadership problems from someone at CIA. When he did so, Kraft revealed that he had been in contact with Ray Cline and Sherman Kent, and received information from them. Alarmingly, this didn’t match CIA’s records. Between the two of them, only one “very brief report” had been filed relating to Kraft. 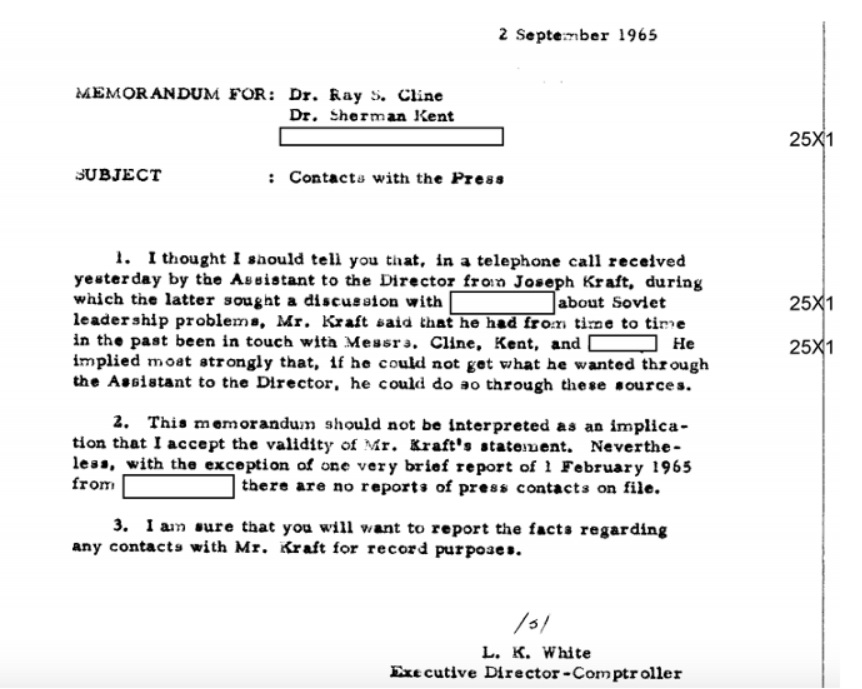 The allegation of a leak was hardly something new to the CIA, although the somewhat brazen nature of it was. What made it notable was that these contacts went almost entirely unreported, despite involving two senior CIA officials. This relationship was then used as an attempt to leverage more information from the Agency in a mild, but seemingly harmless instance of compromise. If the Agency’s suspicions that fellow press pool member Tad Szulc was a Soviet asset were correct, then a much more serious compromise situation might have existed.

Curiously, Kraft isn’t included in the list of journalist that Cline had contacts and private briefings with. 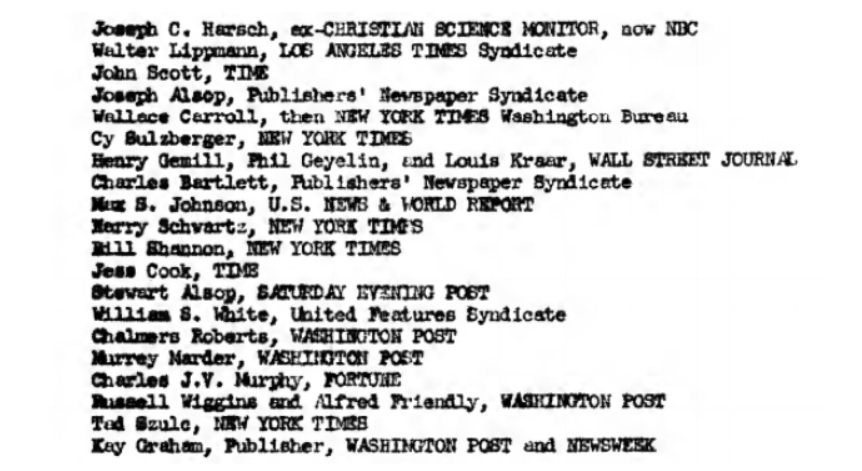 While many details of this case remain shrouded in mystery, this memo makes it clear that Cline didn’t decide to report the contacts on his own - it was a calculated response to having been caught with unreported contacts and private briefings of the press.

You can read Cline’s memo below.