As previously discussed, senior CIA analyst Ray Cline covertly accumulated a number of press contacts whom he provided information to in order to ‘improve rapport, understanding and the Agency’s public image.’ While some of the people on the list were well credentialed and had pasts or futures associated with the U.S. Intelligence Community, documents reveal that at least one of the press contacts briefed by Ray Cline was a suspected foreign agent.

This makes the final note of the memo praising Cline’s press contacts ironic and questionable, at best.

While the memo describes some of his contacts with other members of the press, it provides no information about his contacts with Tad Szulc beyond the fact that they happened. However, according to declassified CIA documents, it’s known that Szulc was a suspected foreign agent, who was not only collecting information for the Soviets or the Cubans, but part of an active measures campaign designed to sabotage AMTRUNK, “one of the most important anti-Castro operations.” In the mid-1970s, one senior CIA officer noted that “a Soviet agent could not be more beneficial to the Soviets and the Communist cause than Szulc has been.” 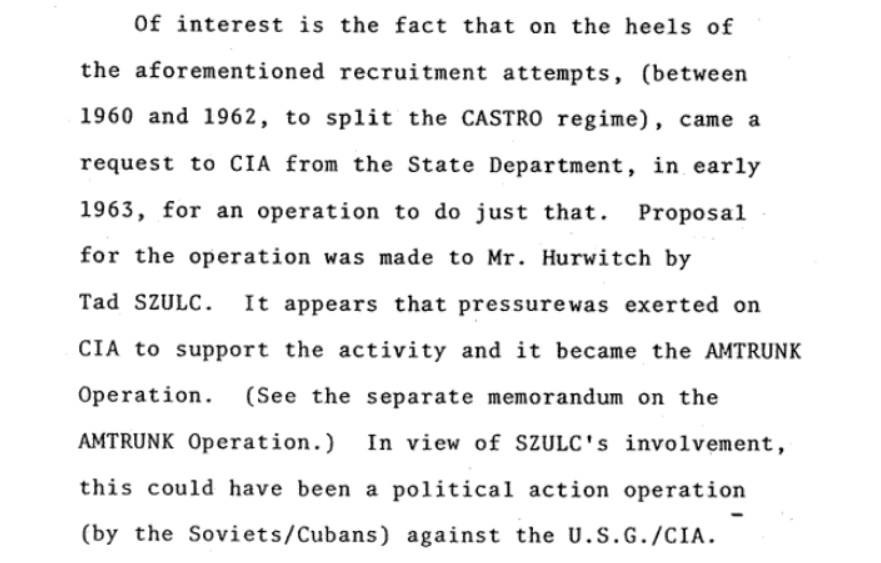 Szulc had been suspected of being a foreign agent since the year after he came to the United States. It wasn’t until eleven years later, however, that he brought himself to CIA’s attention. In 1959, he presented himself to the Agency in Santiago, Chile and falsely claimed to have been cleared, requesting contacts with an Agency representative. Szulc was so persistent and seen as so dangerous that a widespread warning was issued through the Agency. 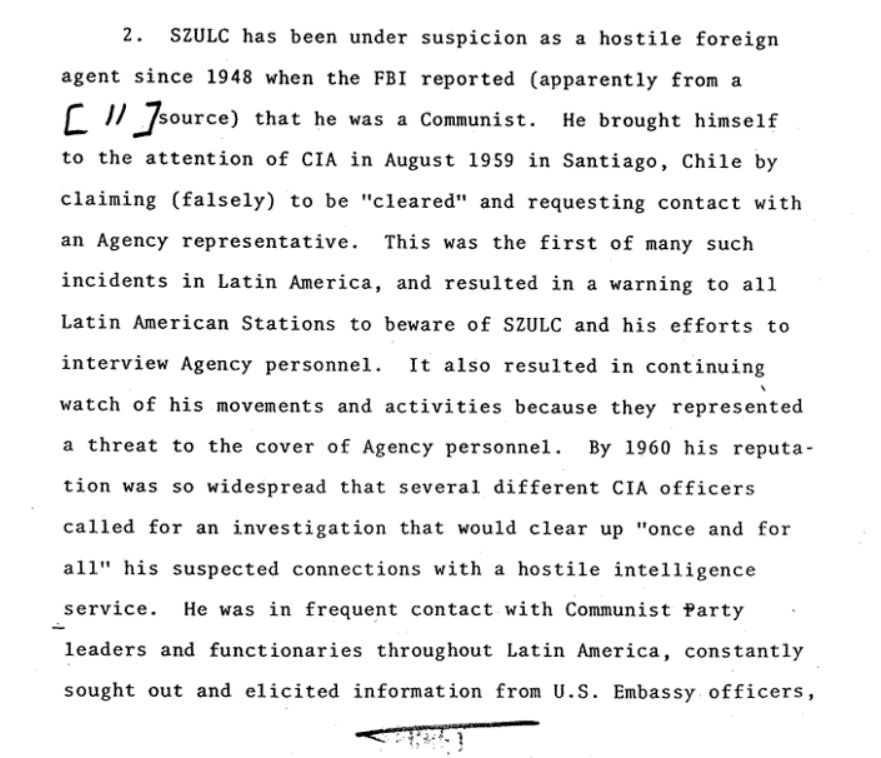 Despite decades of interest and focus on Szulc’s “anti-Agency activities,” as late as the 1970s CIA was unable to clear up the status of Szulc’s foreign connections. None of this, it seems, stopped Cline from briefing Szulc. 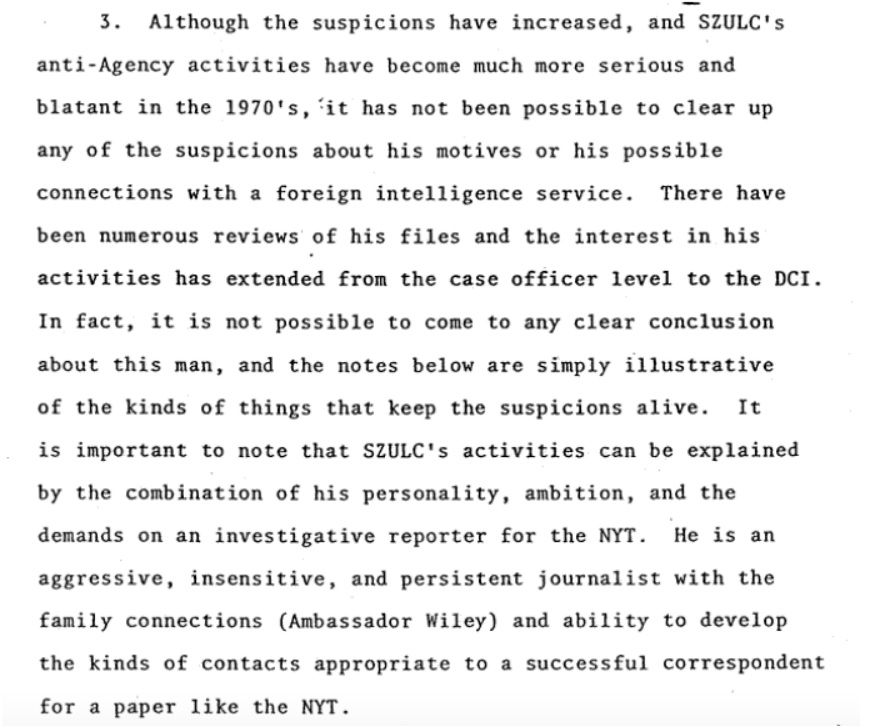 Despite his early anti-Communist leanings, the Agency noted that he had become increasingly critical of the Agency. The essential allegations, however, had been there from the beginning. In 1948, a number of sources indicated to the FBI that Szulc had been dispatched by Polish intelligence agencies. The Agency also believed that Szulc’s marriage had been arranged and performed for the sole purpose of granting him permanent residency in the United States. 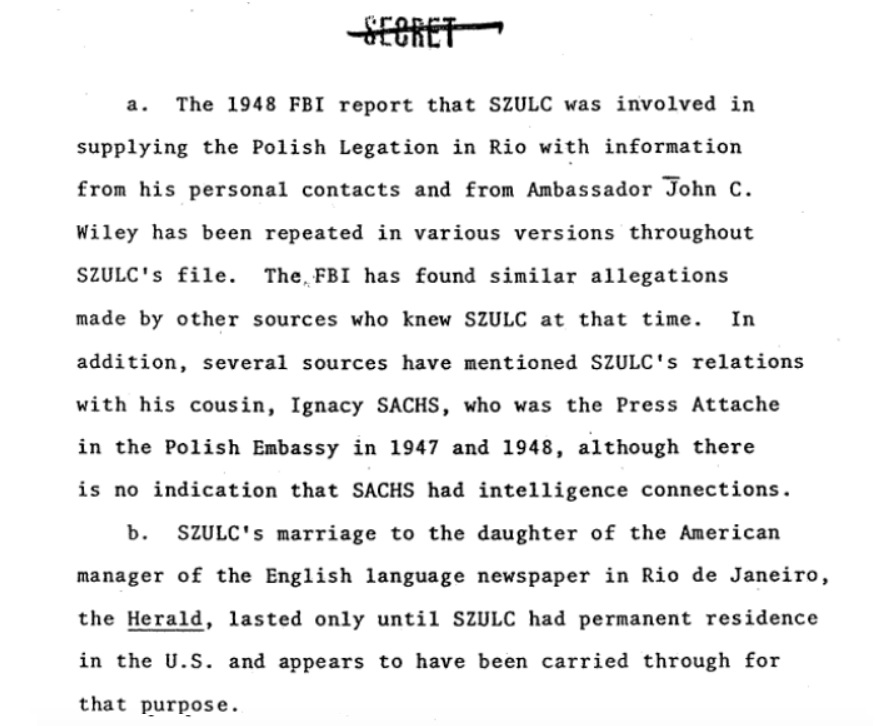 While Szulc was eventually given an official Agency contact, it wasn’t Ray Cline but rather Albert Davies.

Szulc’s next official contact was similarly not Ray Cline but rather Alfonso Rodriguez. Based on his provided statement, Rodriguez was unsure of what to make of Szulc. 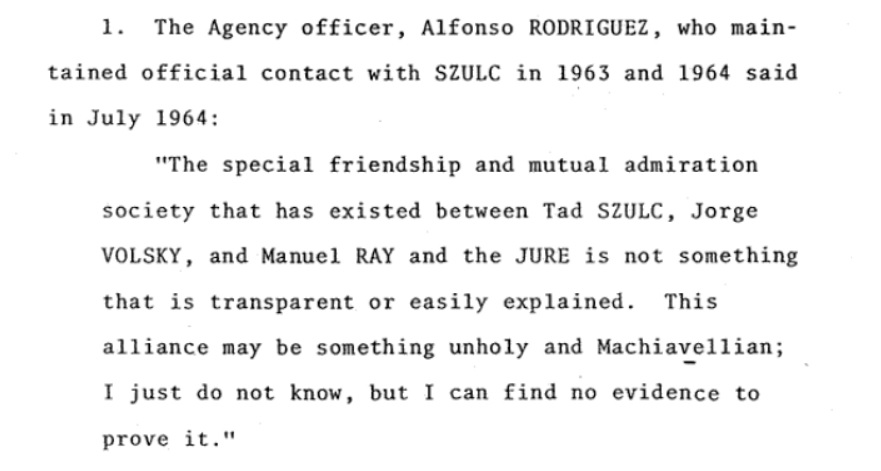 While the Agency acknowledged that the evidence that Szulc was a foreign agent is limited, and aside from statements from confidential sources largely circumstantial. However circumstantial the evidence, Szulc was under suspicion and his contacts with Cline appear to have been unsanctioned. Cline had been carrying out his clandestine press contacts since 1957, and only one entry in the memo is listed as official. The official contact was with Alsop and not Szulc, casting further doubt on whether Cline’s contacts were sanctioned. Given the security and counterintelligence risk, the concerns were real.

If he were a foreign agent, then Szulc’s aid to the Soviets was considerable. He broke the story of the Bay of Pigs invasion, and according to later CIA reports information which was withheld by his editors at the New York Times soon found its way to the Soviets. Other circumstantial but extremely suspicious correlations are brought up by the Agency. Szulc’s daughter, Nicole, had apparently aided Philip Agee in his research for Inside the Company: A CIA Diary. Understandably, the Agency wondered if Szulc hadn’t helped his daughter in her research. 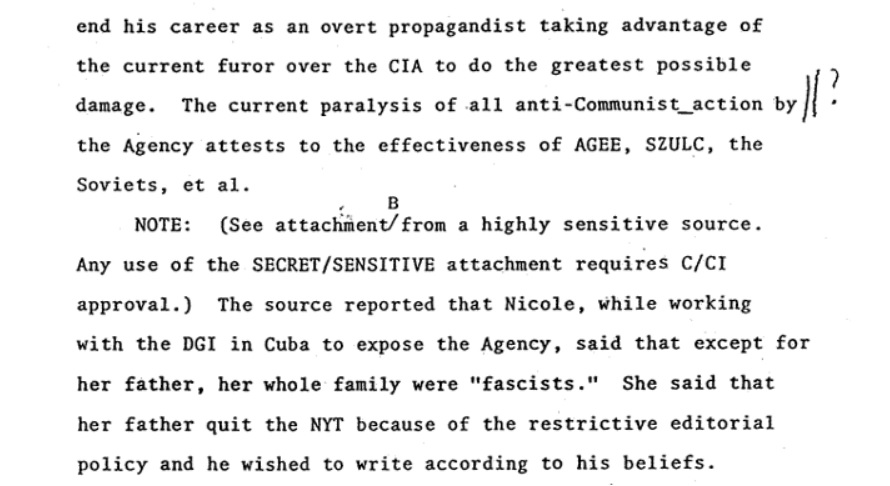 A FOIA request has been filed to learn more about Cline’s contacts with members of the press, including Tad Szulc. In the meantime, you can read Cline’s memo below.