Every FOIA filer eventually has to put up with rejections that don’t make sense - it comes with the territory when you’re requesting records from beleaguered, underfunded records offices dealing with public records laws that are frequently cumbersome and restrictive. However, when these rejections are given to requests dealing with such things as protests - a constitutionally protected activity in case anyone had forgotten - there’s an extra sting. In trying to cover the recent wave of direct action that has been rolling over the country since the election of President Trump, MuckRock has been met with more than our fair share of these denials. Here are five of the worst we have received.

Due to their involvement in the DC inauguration protests, I sent them a request lists of equipment, Special Event Threat Assessment reports (also called SETA’s or situational awareness reports) and even more basic records like incident, after action, and arrest reports. I was denied on all of these. The exemptions? Tactical plans for the after action reports, criminal investigative files for the incident reports, and criminal intelligence for the SETA reports.

While police must balance the public’s right to know against releases that may impact public security, it is troubling when an agency won’t release any documents at all about an activity that is granted explicit protection in the Constitution.

An agency close to MuckRock’s offices in Cambridge, I sent a request to the Boston Regional Intelligence Center (i.e. a fusion center) with a list of the 12 biggest protests in the area since Trump was elected and asked them for all of the situational awareness and field analysis reports that were compiled in relation to these aforementioned demonstrations. BRIC forwarded the request to the Boston Police Department, who had custody of the records. What did BPD do with the request? They denied it in whole.

In doing so they cited Massachusetts public records law exemption (f) which deals with investigatory files, and exemption (n) which deals with blueprints, plans and escape routes from public buildings or locations. While the investigatory files exemption has its place, the public should absolutely have a right to understand how the police are monitoring and surveilling the, again, totally legal if not extraordinarily necessary protests that they are attending or involved with. Seeing how the NYPD has been in legal battles for the last two years due to their surveillance of the Eric Garner protests, this is a justified concern. Especially when a Manhattan judge stated that the NYPD failed “to meet their burden” of proving that releasing the records “could endanger the life and safety of any person.”

And one of the best ways for citizens to be informed about how their local police are monitoring demonstrations, is FOIA. Using exemptions like BPD did to block access in entirety is not in the interest of the public, and not a valid reason to withhold records from the monitoring of protests.

The Chicago PD are no strangers to monitoring protests either, and just recently came under fire for using the social media surveillance platform Geofeedia to monitor Black Lives Matter demonstrations. Which makes their outright rejection to my request asking for records very similar to the ones above, a little mystifying. After years of bad press for this kind of thing, one might think they would boost their transparency game and start preemptively coughing up some records no? Wrong. Instead, they exempted the Muslim Ban demonstration records I had asked for, saying that they either didn’t have the records in their possession, or claiming that the Incident Action Plan I had asked for was exempt due to exemption (v), which covers security threats. This is interesting, because Seattle Police readily gave them to me, and without too many unnecessary redactions.

I have trouble with the argument that these are exempt because if they were to be released it would compromise every other protest response the department conducted. Every protest is different, and will require a completely different response from police and in a different area of the city. Furthermore, I fail to see how it would really impact the police’s ability to effectively and safely conduct operations - if someone is determined to attack the police at a protest, they hardly need to file FOIA’s to study up about where the police are going to be. They will invariably be at the protest.

If Chicago PD really had concerns they could very easily have redacted more sensitive parts but released most of it. Withholding all of the relevant documents hurts no one but the public trying to understand how CPD deals with demonstrations. And for the reasons mentioned in the previous paragraphs, the public has obvious motivations for this.

On February 11th of this year, Austin, Texas held large protests against the ICE deportation of more than 50 undocumented workers that had occurred in the preceding week. It was an eventful demonstration, which culminated in somebody being investigated for attempting to light a patrol car on fire. Certainly a lot of passion against ICE deportations. Intrigued by the zeal on display in Austin, I filed with Austin Police for their records concerning the action. Pretty much the exact request as the others I’ve mentioned, Austin PD exempted all responsive records, citing a law enforcement operations security exemption, and stating that release would allow private citizens to “anticipate weaknesses in a police department” and jeopardize officer safety.

Needless to say at this point, I do not agree. If anything release might allow citizens to understand why the protest had gone out of control or why a patrol car was almost set on fire. What it wouldn’t do is open up every APD protest response action to violence and disruption. The people of Austin have a right to understand how their police force deals with protests, even ones that got messy, and perhaps particularly those ones. The potential of a record to create unexpected blow back must always be carefully considered, but to go about exempting the release of near every protest related document is surely excessive.

Which brings us to the most incredible protest rejection in this article: the blanket rejections from Morton County Sheriff’s Department (MCSD) from North Dakota. MCSD ran point for the law enforcement operation conducted to suppress the Standing Rock protests against the DAPL pipeline. I sent about four protest related requests to them, for things like video footage, arrest reports, documents relating to the massive EMAC response, and reports stemming from the eviction of the demonstrators at the Oceti Sakowin protest camp. All of these have been rejected, with not a single responsive document being handed over. And much of what I asked for not only absolutely exists, it is basic information which should be public knowledge.

A few things - one, to exempt these documents they at once told me that they couldn’t locate the documents, and then also exempted them with public safety exemptions. Two, they ignored my request for months, putting up with haranguing and consistent follow ups, only to lay down, in just one day, four complete denials only after the protests had been put down. 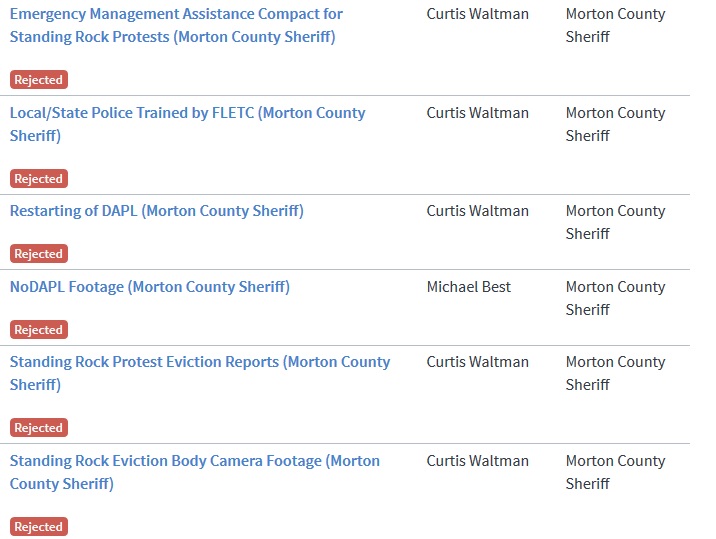 Reports coming out of Standing Rock were shocking to many Americans and carried revelations about how law enforcement were conducting themselves in regards to protests. It is a miscarriage of justice and FOIA law to keep these records sealed when there is such a huge amount of public concern.

In the future it would be very heartening to see records offices at police departments weigh their decisions about protest-related documents more carefully against the need of their constituents to understand how and why the police are doing what they are - if not, then progress can never be meaningfully made on these issues, choked by an inability to have an actual dialogue. Transparency is always the best first step.

Curtis Waltman sent this request to the Austin Police Department of Austin, TX

Curtis Waltman sent this request to the Boston Police Department of Boston, MA