In November 2016, MuckRock submitted a request to the Coroner’s office in Winn Parish. The parish - the Louisiana equivalent of a county - is home to just over 14,000 people and the Winn Correctional Center, a state prison once under contract with Corrections Corporation of America (now CoreCivic) and now under the management of LaSalle Corrections, another for-profit prison company.

For years, we’d heard of mismanagement at the facility - including and beyond the issue-long coverage given to the facility last summer - and we wanted a look at the deaths that had been recorded at the prison, so a request to the coroner seemed to be in order. We had submitted one initially in July 2015 and it had been sending follow-ups by fax with no response since then. 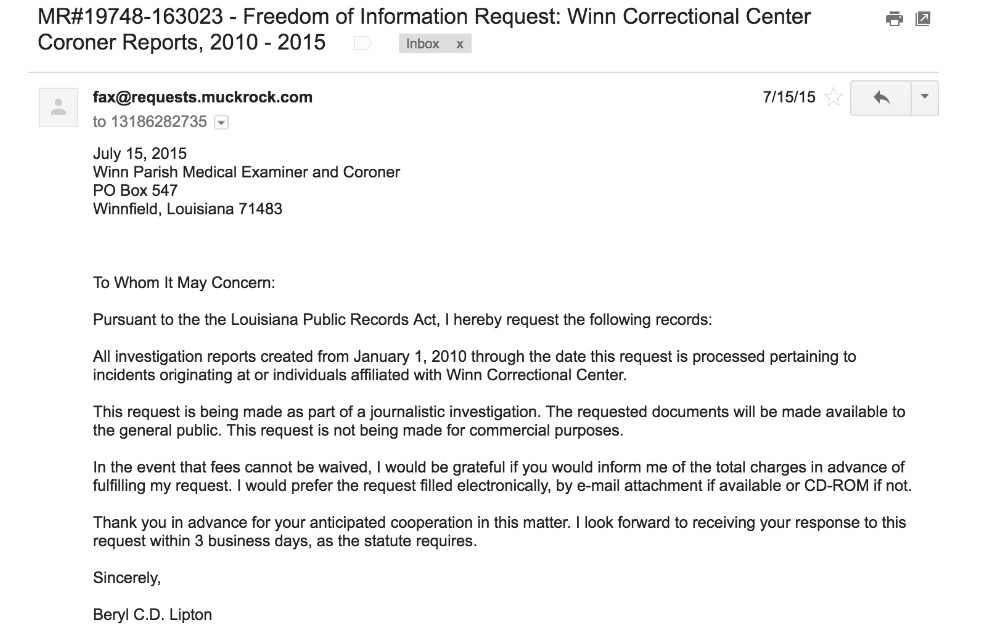 Our freshest submission seemed destined for the same fate until we received a phone call one evening from a nurse at the office of Dr. Randolph Williams, who let us know Dr. Williams, decades-long coroner for the area, had lost the most recent election to Dr. James Lee.

So we readjusted our contact information and sent our request out anew. Our response came three follow-ups later…roughly the number of reasons why my request was inappropriate.

Louisiana is the only state we know of that allows agencies to require identification for the sole purpose of determining the age of the requester; in contrast, most states prohibit agencies from predicating their release on the identity or the purpose of the request at all. But in Louisiana underage requesters are not permitted.

Making a request for death reports seems like one of the darkest, unlikely ways babies from the bayou could be spending their time, but, fine, I don’t know what’s going on down there.

The second reason immediately pushed back on the alternate reality in which I had proved I was not a juvenile records junkie. My search terms didn’t line up with the way they actually keep their records.

Agencies keep their materials in records systems that make sense to them but may not be intuitive to anyone outside the office, so the complaint here is reasonable enough. I’ll have to tweak my parameters the next time around. However, the third point suggests that I’ll also have to tweak my submission standards.

Refusing to take request by email is one of the most obvious ways agencies discourage requests in the digital age. The kicker is that the Coroner’s Office reiterates that this caution is taken to - again - ensure that no underage requesters are getting their hands on public records.

And finally, the office notes that even if I were over the age of eighteen and I had submitted my identification and I had used some means other than email to do so and my request were phrased in a way that made sense to the agency, I should expect to wait a bit longer than planned, because anything like a three day response period only applies to walk-in requests.

Public records law varies from state-to-state, but the insistence on protecting the innocence of youth from the horrors of the government’s public records is one of the most interesting ways an agency has tried to deter our curiosity. Do you have a public records rejection you think seems sillier than sane? Let us know at info@muckrock.com or on Twitter @MuckRock