Leaks from the government and even Congress itself are nothing new. As shown by a declassified memo describing a meeting between Henry Kissinger and CIA Director William Colby, these concerns were among the very ones facing the White House, the Rockefeller Commission and the Church Committee in the mid-1970s 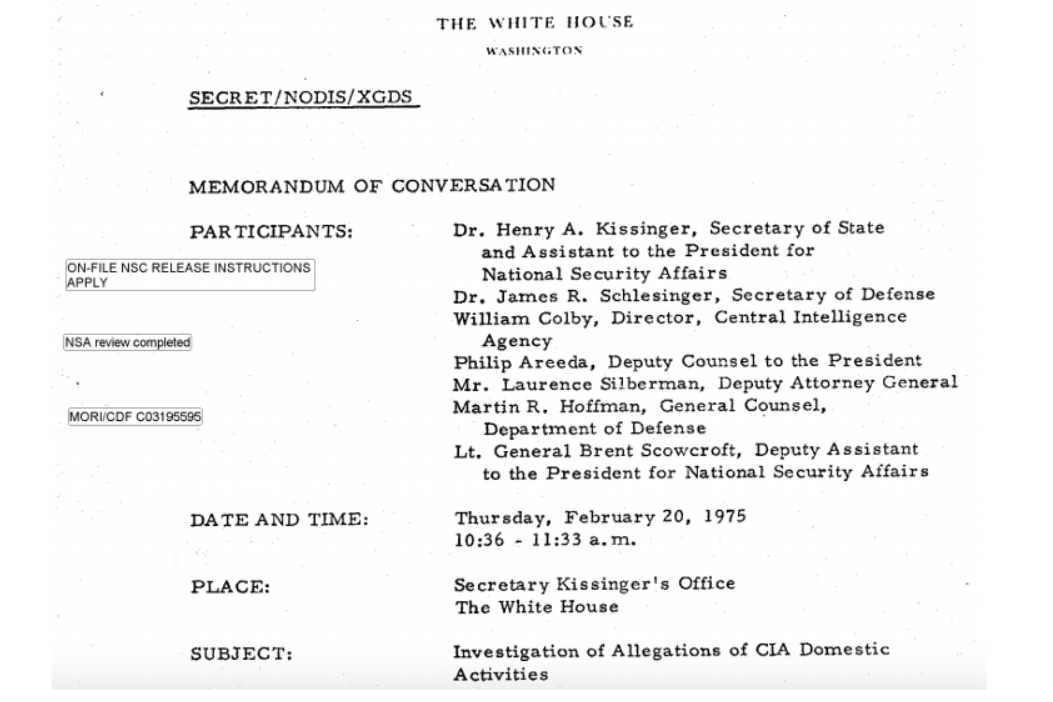 In discussing the hearings, Secretary Henry Kissinger was immediately focused on how things would appear to the public and to other countries. Kissinger was worried that “to the average mind and out of perspective it could look inexplicable.” This could result in “the drying up of the imaginations of the people on which we depend.”

Exactly what Kissinger meant by that is unclear - whether it was the public’s imagination of what the government and intelligence agencies did, or whether it was the imagination of the people that the government relied on. Either way, Kissinger didn’t want people to worry about being indicted for something ten years after it happened. Essentially, a kind of chilling effect. Regarding the NSA, Kissinger simply pled ignorance.

Secretary of Defense Schlesinger tried to reassure Kissinger by telling him that “legally, NSA is spotless.” Kissinger still worried, and warned that since the Church Committee was “going to look into the legal, moral and political cost-effectiveness aspects” of NSA and government activities, “then we are in trouble.” He also opined that the Congressional members and staff worried him, since he thought some wanted to “leak [the government] to death.” 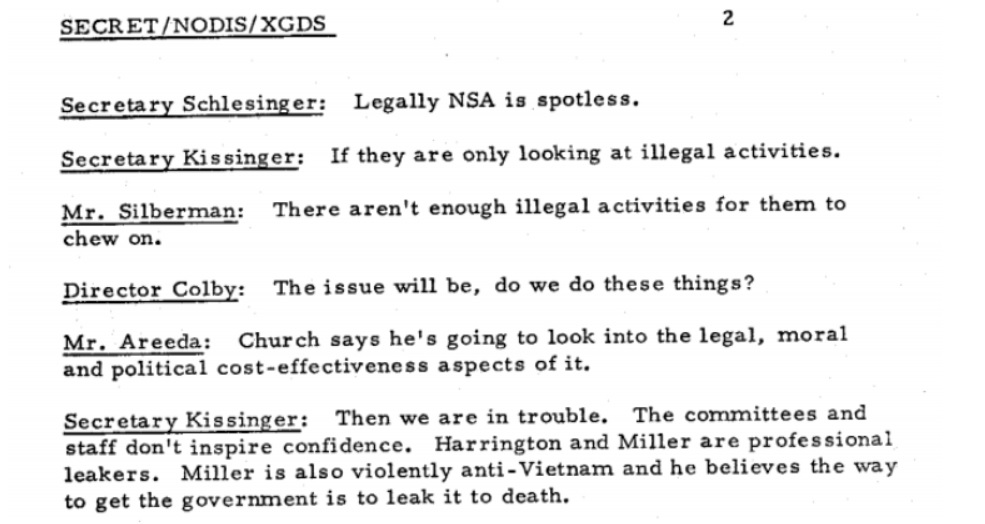 While CIA Director Colby thought that secrecy agreements would suffice, Kissinger was doubtful. The agreements would stop them from leaking in their own name, but it wouldn’t stop the “professional leakers” from anonymously going to reporters like Seymour Hersh. Bringing up Hersh was Kissinger’s way of quietly rebuking of Colby - it was Hersh’s reporting on the CIA Family Jewels that had caused the Church Committee’s investigation to come into existence.

The discussion quickly moved to ways to limit the information that Congress would have access to. Names wouldn’t be used, instead numbers would be. The correlation between these names and numbers would be closely held. The biggest question faced by the White House staff was how to avoid complying with any requests for information from the most sensitive category. 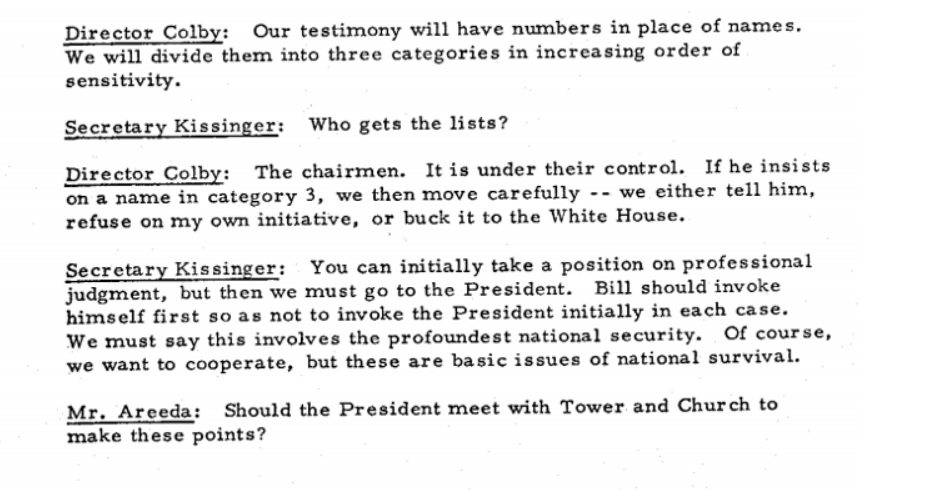 The issue was complicated by the fact that this meant that Senator Church didn’t want to allow this and that they were of the opinion that the CIA Director shouldn’t testify.

The other plan was to use the FBI to deflect attention and trade on the relative good will and press that the FBI had at the time. This option was enhanced by the fact that J. Edgar Hoover’s death was still relatively recent - everything could be blamed on a dead man who’d run the Bureau for as long as anyone could remember. This proposal was followed by Kissinger relating a “story about Hoover and the female spy.”

Based on his following statement, Kissinger might have been illustrating things they wanted them to keep away from. Colby responded to this by saying he would cite privacy concerns in order to prevent releasing files on people. These files were later destroyed at the first opportunity.

The strategy quickly moved back to limiting Congress’ access to information and preventing leaks. Kissinger noted that they couldn’t fight over details, only categories of information. As a result, they needed to plan carefully. They needed “to know the rules about the NSA, covert operations and any other areas.”

The Deputy Counsel to the President warned that there was a major Constitutional problem on covert operations: they couldn’t take the position that they could withhold information from the Congressional committees responsible for oversight. Notably, this is the exact position that would be taken by the Reagan administration and used to enable and cover up significant aspects of Iran-Contra.

Kissinger then argued that they couldn’t reveal details about covert operations not because they were objectionable or too numerous, but because there weren’t many at all and it would “show us to the world as a cream puff.”

A passage that is especially interesting following the additional exposure of and increased interest in mass-surveillance as a result of Snowden discusses the NSA. According to the CIA Director, “the dangerous thing” was if NSA “can pick up conversations between Americans.” Kissinger himself wasn’t worried about the exposure of illegalities “but that in the process of out about illegalities they will unravel NSA activities. In the process of giving us a clean bill of health he could destroy us.”

The meeting concluded by Kissinger noting that they had to carefully plan ahead, lest they survive one week’s hearings only to cause their destruction the next week.

You can read the transcript of the discussion in the Memorandum of Conversation below.