While some of the inherent problems in the Tower Commission, such as Senator Tower’s conflict of interest and family ties to CIA, have been documented, the fact is that none of the government’s investigations into the matter were able to proceed without obstruction. The final report on Iran-Contra, which has rarely been seen but was found in the CREST archive, makes this explicitly clear.

The report, entitled “State Department and Intelligence Community Involvement in Domestic Activities Related to the Iran/Contra Affair”, was issued by the House of Representative’s Committee on Foreign Relations on September 7, 1988. For comparison, the House Select Committee to Investigate Covert Arms Transactions with Iran and the Senate Select Committee On Secret Military Assistance to Iran And the Nicaraguan Opposition finished their hearings in August of 1987 and issued the report that November. Not only was it completed after the Iran-Contra hearings, it used information that had been denied to previous investigations to undermine their findings.

The introductory letter itself makes it clear that “there are many individuals who were intimately involved in these activities who were never questioned by the Iran/Contra Committees about these matters and who have not been available to any of the other investigations that have been conducted.” It also makes it clear that they were repeatedly denied documents they had been promised access to.

The overview of the report itself wastes no time in raising important issues that have been largely under-examined: did the State Department funnel money through a classified program to illegally aid the Contras and lobby Congress? 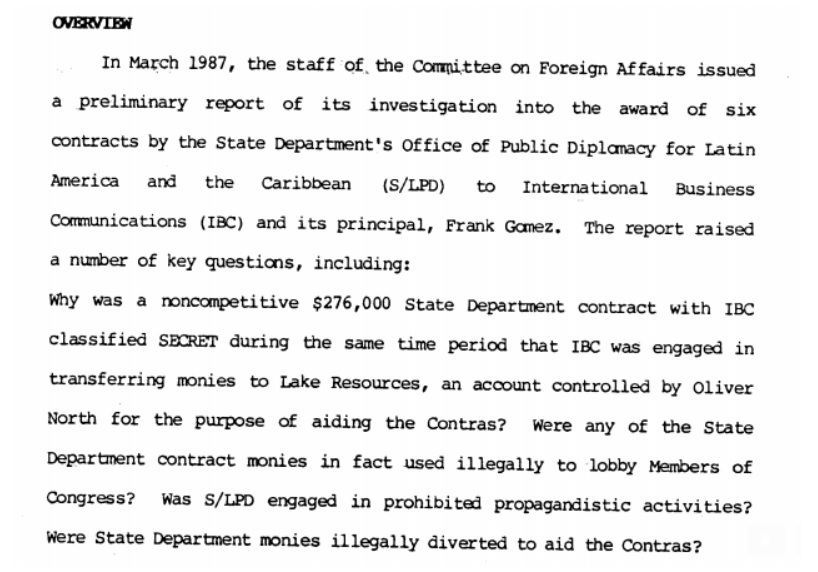 The overview also quickly indicted the Government Accountability Office’s first report. It noted that GAO auditors had said that they would have reevaluated their conclusions about the State Department’s Office of Public Diplomacy for Latin America and the Caribbean (S/LPD) if the GAO’d had access to documents that were later released. 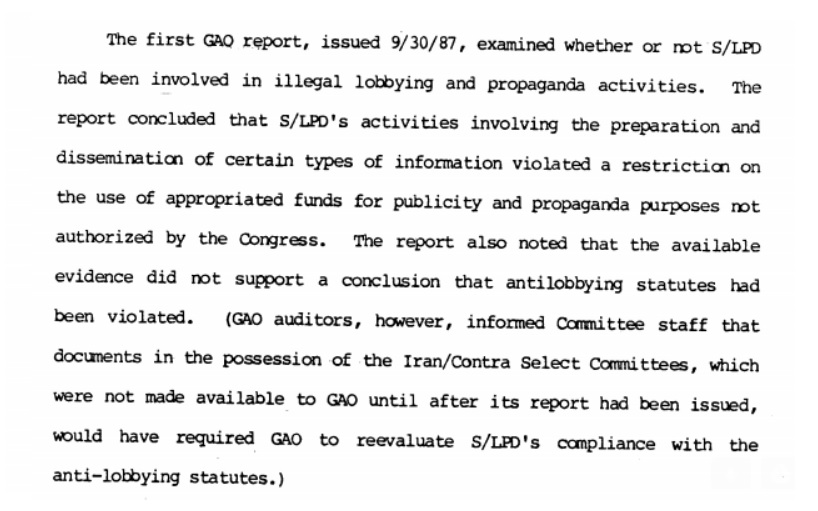 The only investigations that the committee didn’t undermine were the ones that had outlined the illegal activities that surrounded the Iran-Contra affair. The overview simply notes that second GAO report, for instance, found that the S/LPD “generally did not follow federal regulations.”

The committee pulled no punches when it presented its thesis in the overview. According to the report, the State Department office had been “set up and managed by operatives in the National Security Council (NSC) who maintained close ties with Oliver North and [then] CIA Director Casey.”

In pointing to the involvement of the State Department, the report raises some of the same issues that led FBI and IRS investigators to want to look at the IRS for involvement in supporting these fundraising initiatives. Much like the additional investigations that this report calls for, it seems that the proposed investigation of the IRS over Iran-Contra remains a phantom. 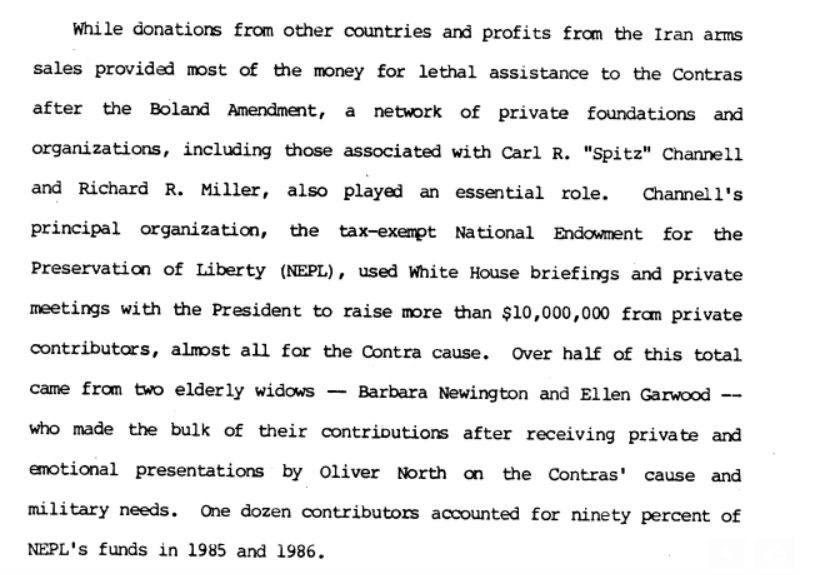 The report itself mentions a number of specifics regarding the State Department’s involvement in funding Iran-Contra and lobbying Congress, but the opening paragraph of the conclusion is brutal in it brevity. The report alleges that senior CIA and Department of Defense officials “were deeply involved in establishing nad participating in a domestic political and propaganda operation run through an obscure bureau in the Department of State which reported directly to the National Security Council rather than through the normal State Department channels.”

The most damning denunciation of the prior investigations, however, comes from the penultimate paragraph of the report. Despite repeated requests, documents “were never provided to the Iran/Contra Committees nor the Foreign Affairs Committee.” The State Department had refused to act on the suggestion of its Inspector General that the former S/LPD head be disciplined. The Inspector General for the United States Information Agency had similarly ignored requests to investigate the matter. People heavily involved in these activities had been transferred and promoted elsewhere, often to senior positions within the Government. 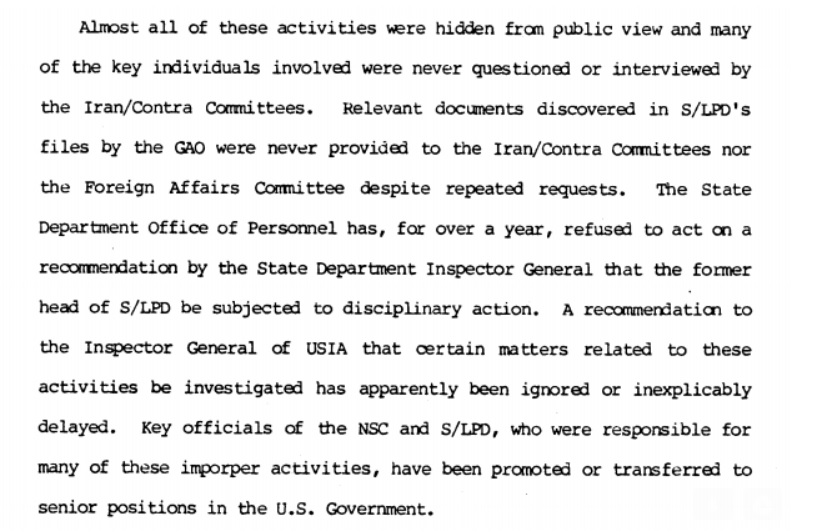 The final paragraph calls for an additional investigation “to determine the extent to which the Department of State was used, and perhaps compromised” by the CIA and NSC to run a domestic covert operation to manipulate Congress, the media and the public. Currently, there is no indication that this investigation took place.

Later articles will look at some of the specific allegations against S/LPD, but in the meantime you can read the report below.