Looking to build off our reporting on the National Sheriffs’ Association (NSA) and their help with linking North Dakota law enforcement with the public relations firms Delve and Off the Record Strategies during the Standing Rock protests, we filed a request with the Cass County Sheriff’s Office (CCSO).

Cass County is where Fargo is located, the biggest city in the state of North Dakota, and their sheriff Paul Laney sits on the Board of Directors for the both the Sheriffs’ Association and the North Dakota Association of Counties. Based off of the emails MuckRock received from the Laramie County Sheriff, Laney seems to have taken on a central role in law enforcement’s response to Standing Rock.

In the request we asked for emails from the NSA, Off the Record Strategies, and Delve, along with any after action reports, and specified that the date range for the search should be from August 1st 2016 on. It should also be noted here that after many requests to several different agencies, it seems after action reports concerning Standing Rock are currently off limits due to pending legal cases against water protectors. Therefore, we didn’t really expect much of anything off of that portion of the request.

The CCSO’s reply was shocking: over 11,000 documents were responsive, resulting in a bill of over $23,000. Discounting the exempted-to-be after action reports, that is over ten thousand responsive emails to the request.

At MuckRock we deal with records requests like this every day, and we understand that a number of the emails in any email request are likely to be a form of spam - however, for months we have been making requests to North Dakota EMAC (Emergency Management Assistance Compact) responders and other law enforcement agencies dealing with pipeline protests for emails with the NSA. This is the first time we’ve seen a fee this large. Washington County, Minnesota Sheriff’s Office gave us a seven dollar charge for about a hundred pages of records, mostly spam. This was for a date range of eight months more than the Cass County Sheriff request, as most of the National Sheriffs’ Association requests were filed with a date range of January 1st 2016 on.

In order to try and suss out exactly where most of those emails are coming from, we narrowed the request to just emails from Delve and Off the Record Strategies. 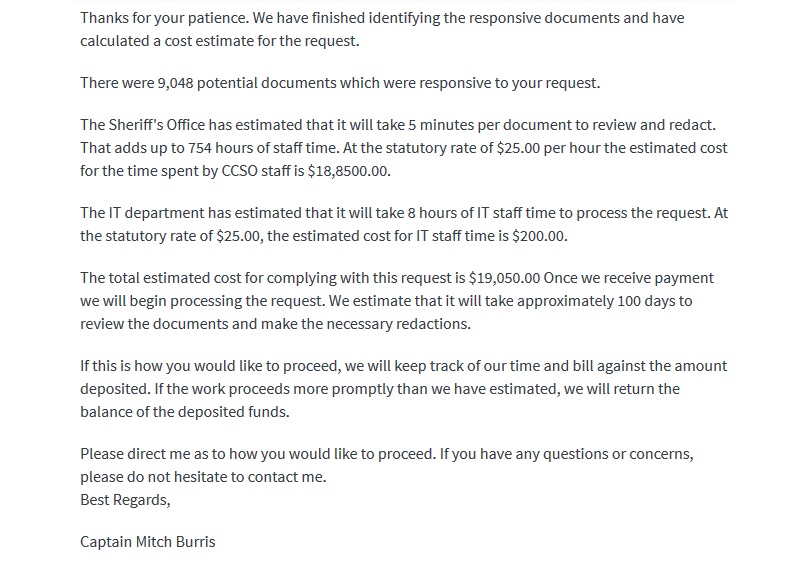 As it turns out, the great majority of the emails were coming from those firms. The exact number is 9,048, a staggering amount of communication between a Sheriff’s Office servicing a community of just under 150,000, and public relations firms. Keep in mind this is just for a period of one year. The final cost tally for that, is just over $19,000 and an estimated 754 hours of staff time.

We’re working to continue narrowing the request, but for now, one thing is clear - the CCSO and those firms had a lot to talk about. Follow the request here.