Judi Bari and Darryl Cherney, members of the environmental organization Earth First!, were driving Bari’s car through Oakland, California one night in May 1990 when a bomb exploded in the vehicle’s backseat. The Oakland Police Department and Federal Bureau of Investigation were soon on the scene, arresting the pair for possessing and transporting an explosive.

The FBI’s subsequent inquiry involved an intelligence gathering operation into the politics and tactics of Earth First!, according to the agency’s file on Bari, in addition to forensic research and interviews.

At the time of the car bombing that almost killed Bari, she and Cherney were organizing the Redwood Summer, a movement to stop lumber companies from clear-cutting old-growth redwoods in Northern California. In 2002, the FBI and OPD awarded Bari and Cherney’s estate $4.4 million following a federal civil suit against the agencies, which were charged with falsely arresting Bari and Cherney and violating their rights.

While the mystery of the car bombing remains unsolved, the information contained in the file reveals the scope of the FBI’s investigation into Bari as a suspect in the case. The file contains notes from searches of Bari’s home, news clippings about Earth First! activities during the Redwood Summer, and arrest reports - all standard features of such an investigation. More unusual are letters addressed to the Bureau, which recount strange and interesting theories of who the perpetrator may have been: A religious extremist calling themselves “The Lord’s Avenger,” Maxxam, the owner of Pacific Lumber, and even the OPD or FBI itself.

The most striking aspect of the file is the presence of misinformation about Earth First! and Bari in the FBI file. Lies and smear tactics were an important aspect of the campaign by Maxxam and pro-logging groups against Redwood Summer, and it is notable that the FBI retained this “intelligence” as part of its investigation.

One document, sent to the FBI from Mother’s Watch, an organization that judibari.org lists as a front for Maxxam, is likely a flyer that was distributed as part of the group’s disinformation campaigns against Earth First! 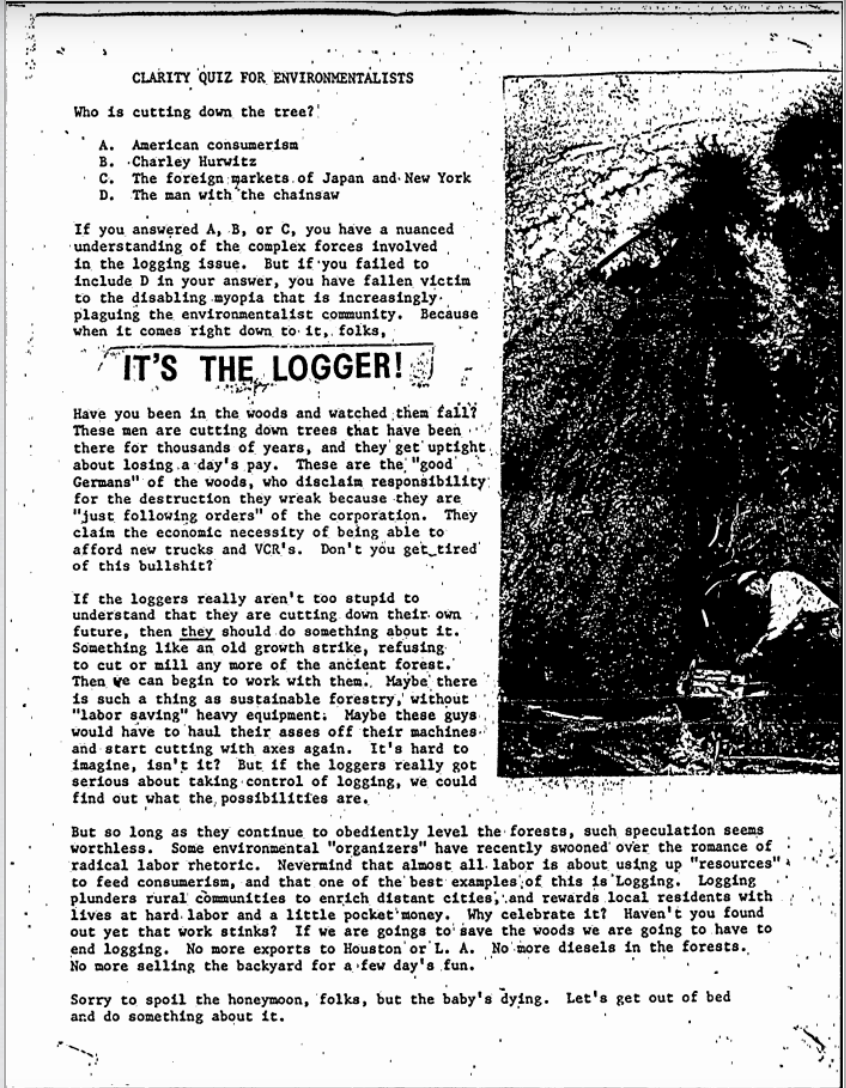 This document is almost certainly fake - Earth First! sought solidarity with loggers as a key feature of their Redwood Summer platform.

Other disinformation about Earth First! tactics were retained by the FBI. One clipping from the Earth First! Journal headlined “Eco-Kamikazes Wanted” is included in the file, although the sender and recipient of the clip are redacted. 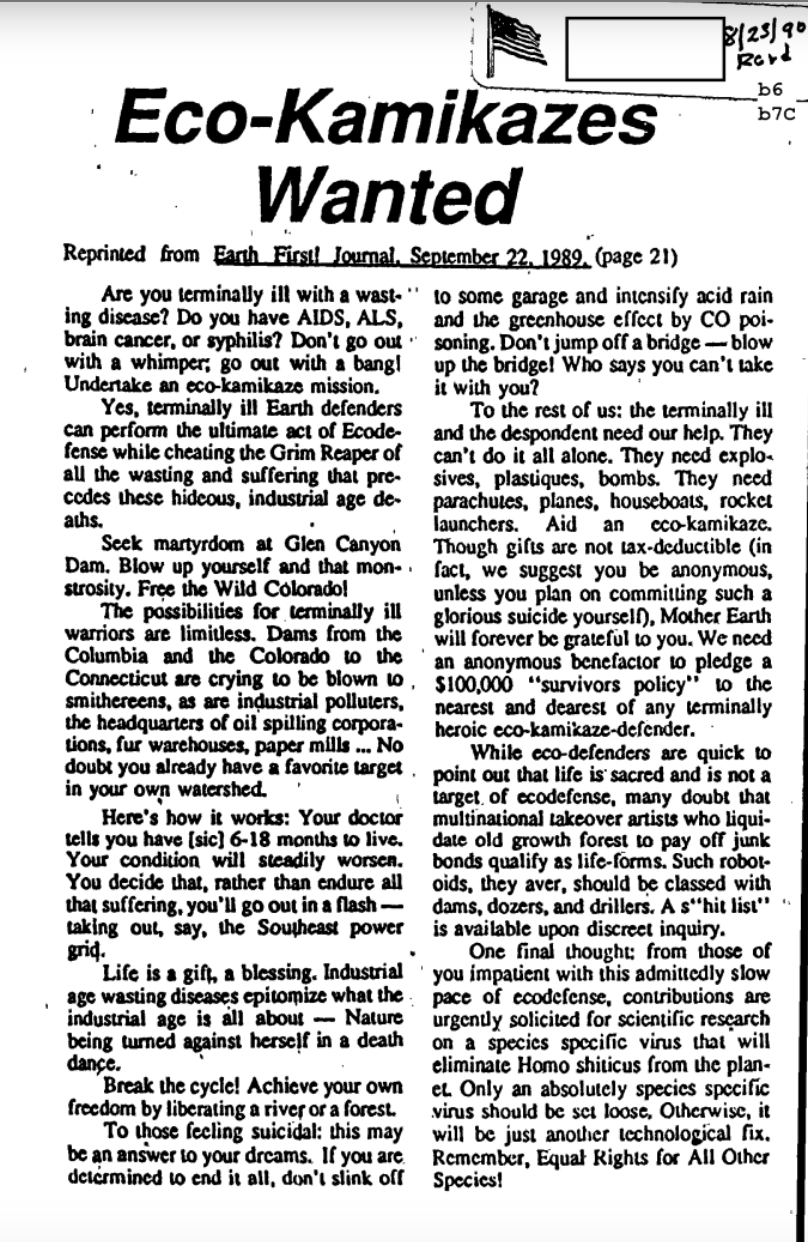 While the article is clearly satire, whoever sent it to the Bureau likely did so with the intent of proving that Earth First! was a violent organization (as many other letters in the file did). The ironic tone of the article may not have been obvious to the FBI at the time; mainstream media outlets described Earth First! in such sensational terms that legitimate coverage was nearly indistinguishable from sarcasm. A New York Times article from 1990 about Redwood Summer narrated, “With whistles, horns and Indian war whoops, the Earth First guerrillas announce their arrival. On the ridge above them, several loggers in steel helmets look up in astonishment.”

Perhaps most intriguing is what the Bari file says about the Highlander Research and Education Center in Knoxville (formerly the Highlander Folk School) and what it doesn’t say about The Nation.

In a document addressed to “Director, FBI” that contains subscriber information provided by “the appropriate directories and from inquiry with the South Central Bell Telephone Security office,” a number of telephone subscribers are listed. The subject of the document is as follows, so presumably the subscriber data relates to Bari or Cherney or the investigation into the car bombing. 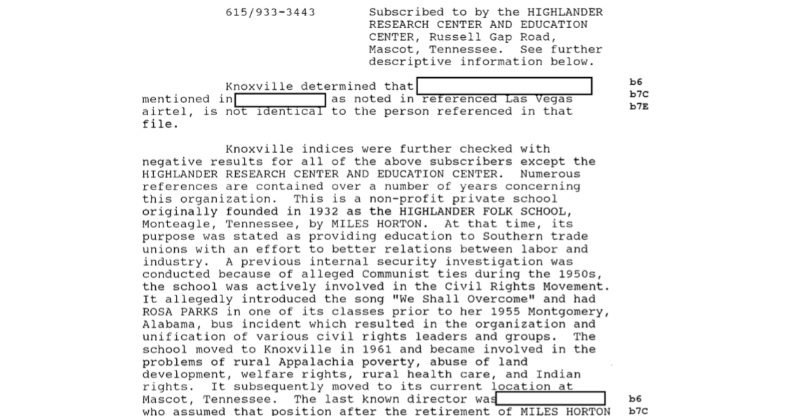 Bari had attended the Highlander Research and Education Center before the Redwood Summer began, so it is not surprising to find it in this file (given that the school was under FBI surveillance at the time), but this short summary, particularly the line about Rosa Parks, is quite interesting.

In another subscriber list, The Nation magazine is listed. The Nation wrote the following about the car bombing and Redwood Summer in July of 1990: 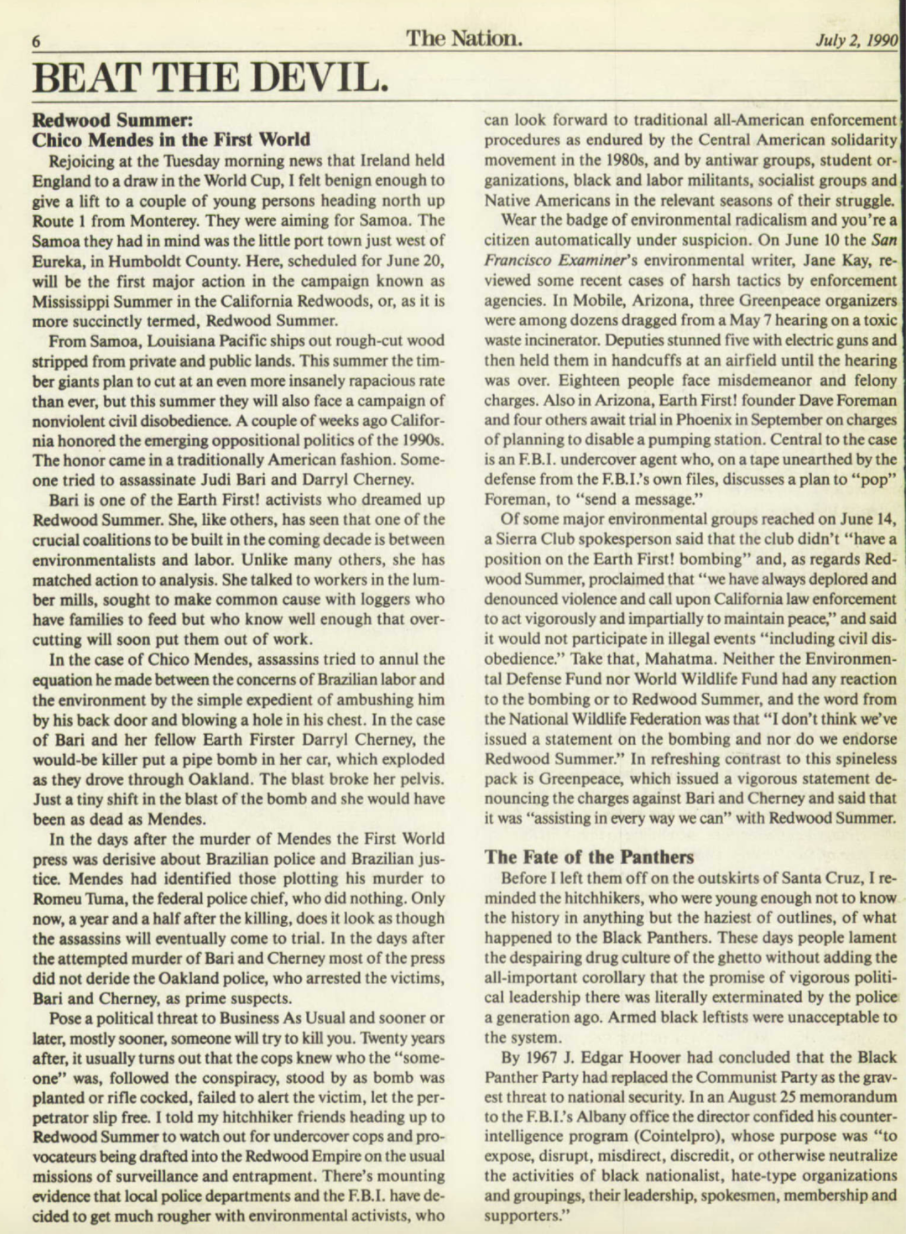 However, the FBI’s comments on the magazine are almost fully redacted in the subscriber list: 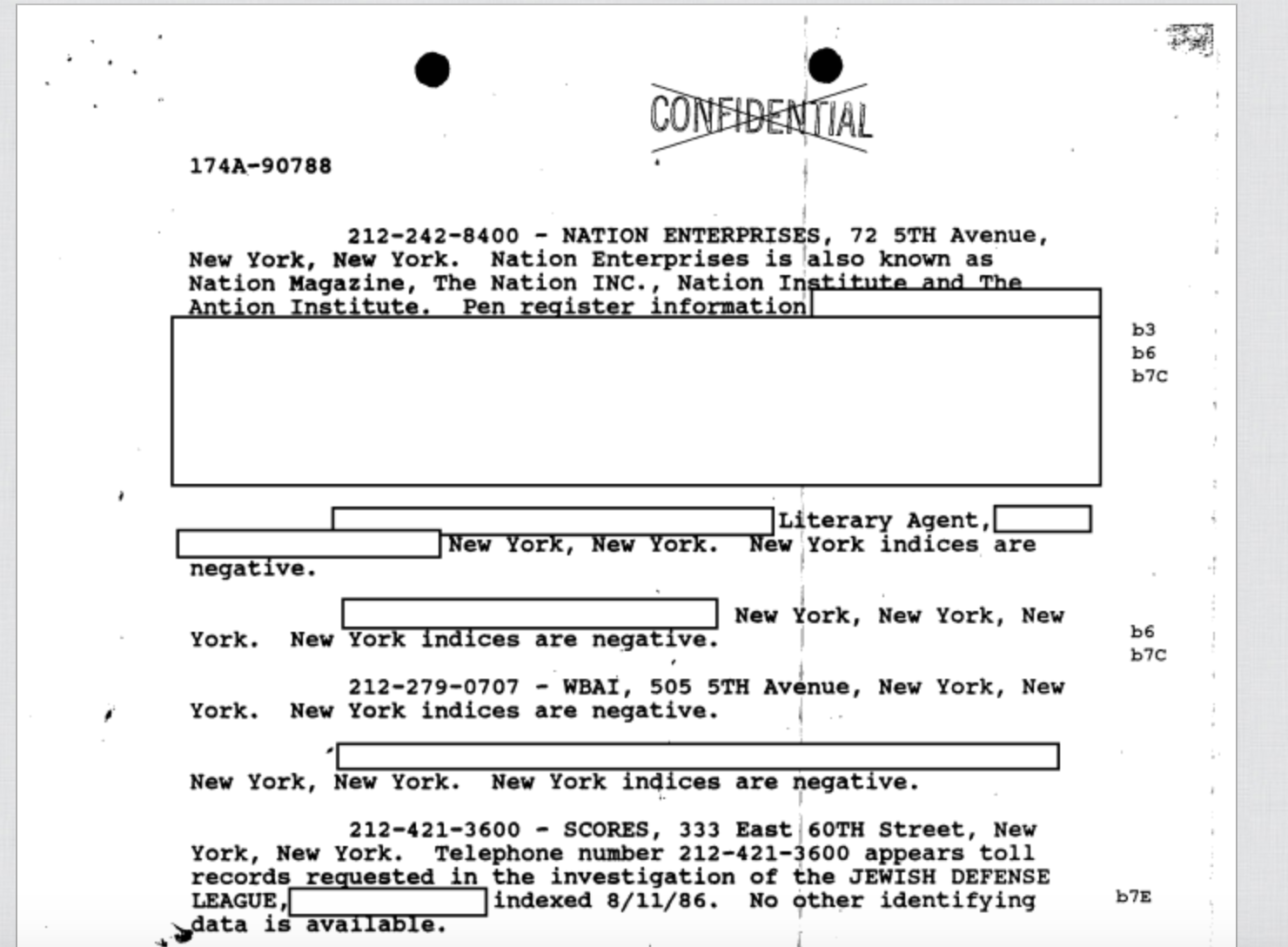 The b(6) and b(7)c redactions are personal privacy redactions, and the b(3) redaction is something of a catch-all, so it is not entirely clear what type of content was redacted. The Nation was long under surveillance by the FBI (and even acquired its own FBI file in 1986), but it does seem strange that description as straightforward as one that appears in a subscriber list would be fully redacted.

Over 3,000 pages of Bari’s FBI file have been released so far, and more are on the way. Check out the file here, and let us know if you find anything interesting.

Mackenzie Farkus sent this request to the Oakland Police Department of Oakland, CA