Congresswoman Bella Abzug had issues with trusting CIA when it came to their handling evidence of illegal and improper Agency activities. These issues had been previously raised with then-CIA Director George H.W. Bush, prompting some behind-the-scenes waffling at CIA over whether they would promise to obey the law when it came to destroying records of CIA wrongdoing. By no means was the question settled, as CIA memos show that they continued to debate how to handle the destruction of records. While the Congresswoman fought to prevent the destruction of records of CIA wrongdoing, the Agency rushed to begin destroying everything they could. 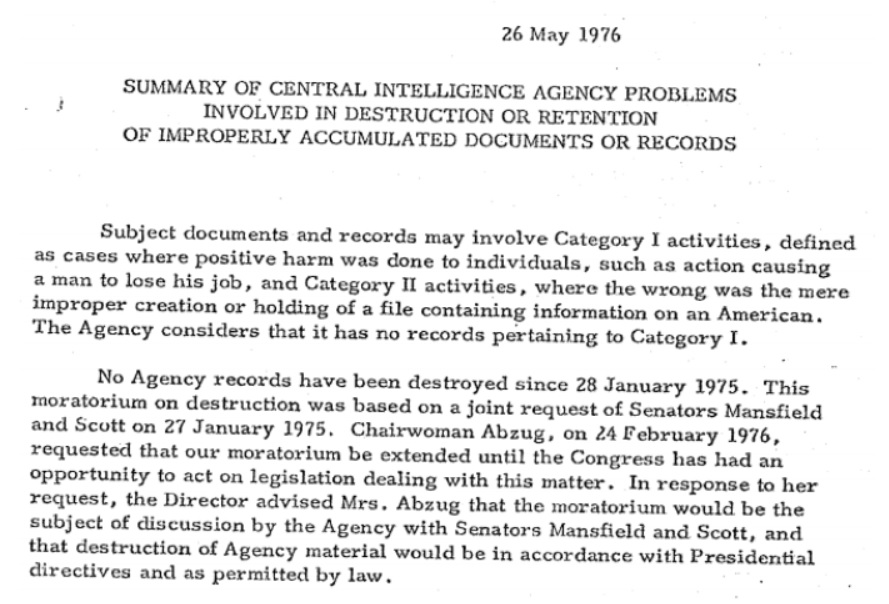 In the May 1976 summary, the Acting General Counsel for CIA argued that there were at least 17 types of “questionable files” that they could destroy as soon as the moratoriums were lifted. These included files monitoring protesters in Washington D.C., former employees who had published classified information, and on people “well known” for “anti-U.S. broadcasts and other activities abroad.”

Other files had to be retained for the purposes of litigation and criminal investigations relating to Operation CHAOS and the illegal mail opening program. That year and again the following year, however, DOJ would decline to prosecute for these matters. Until those matters were resolved, about 90% of the improperly accumulated files on Americans couldn’t be destroyed.

CIA’s Acting General Counsel proposed “a short, additional self-imposed moratorium on destruction of improperly accumulated files for perhaps 60 to 90 days.” The paragraph with this proposal creates a few problems when considering the full record. The most significant problem seems to be that the CIA Director completely ignored the advice. Despite CIA’s Acting General Counsel stating that the proposal he or she put forward would see “very few files … destroyed for quite some time,” the CIA Director announced a week later that they would begin destroying files almost immediately. 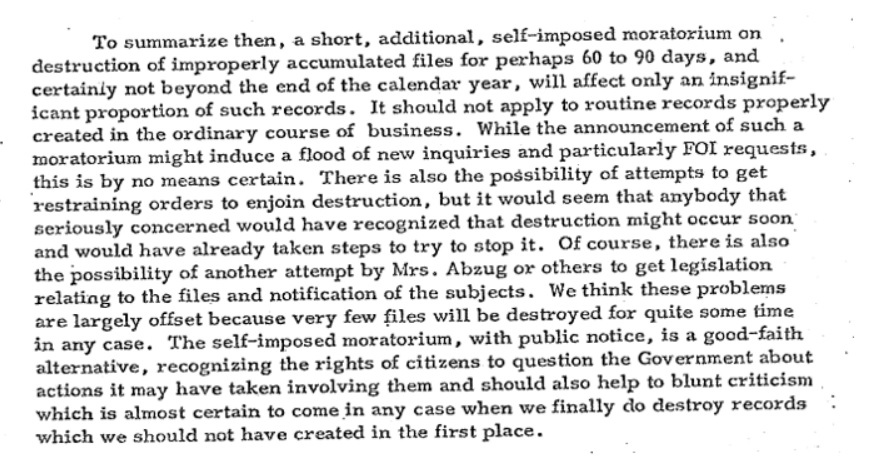 The CIA Director’s decision may have had something to do with the risks enumerated by CIA’s Acting General Counsel. The moratorium created the possibility of “a flood of new inquiries and particularly [FOIA] requests” while also allowing for the possibility of “restraining orders to enjoin destruction” or Congressional action “relating to the files and notification of the subjects.” Whatever his reasoning, on June 2nd CIA Director Bush informed Congress that they were going to proceed with the destruction of records.

According to the CIA Director’s letter, the Agency was “required to destroy much” of the material subject to investigation by the Rockefeller Commission and the Church Committee. According to DCI Bush, not all of the material to be destroyed was required to be destroyed by the Privacy Act. Some restrictions would apply, including anything subject to “pending litigation and Justice Department investigations.” Some of the records to be destroyed, however, were never even indexed. Regardless, CIA acknowledged they couldn’t destroy these records until the litigation ended and DOJ’s investigation was over.

When Congresswoman Abzug received word of this, she was not happy. Her response to the CIA Director also highlights another problem with the logic of the proposal from CIA’s Acting General Counsel, who had warned of “the possibility of another attempt by Mrs. Abzug or others to get legislation relating to the files and notification of the subjects.” The problem was that the attempt was underway and the legislation was pending. As the Congresswoman pointed out, the CIA Director had completely failed to notify her of this decision despite being aware of the legislation and having previously testified before her Subcommittee. The CIA Director’s decision to invoke the Privacy Act in his decision made it all the more egregious that he failed to notify Congresswoman Abzug, whose Government Information and Individual Rights Subcommittee had jurisdiction over the Freedom of Information and Privacy Acts. 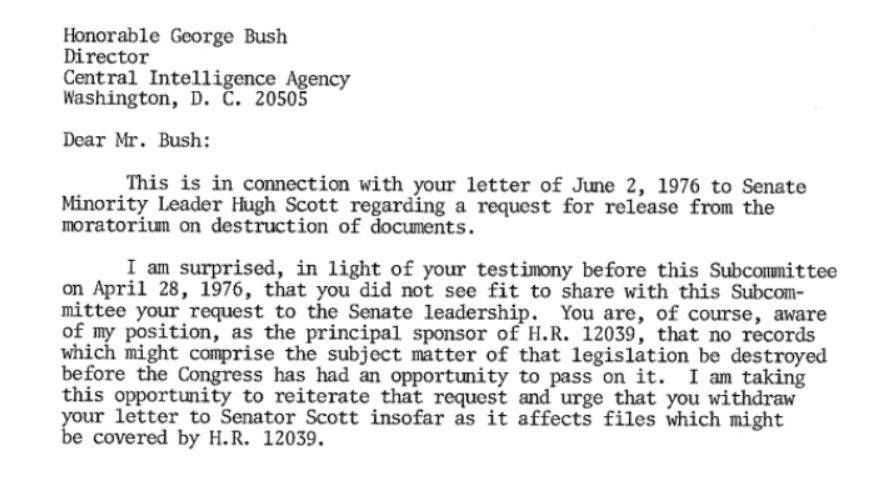 Her response also highlighted, in a rather diplomatic fashion, that the Agency seemed to be rushing to destroy records “before the Congress has had an opportunity to pass” the legislation. Her response also highlighted that, even with the Rockefeller Commission and the Church Committee finishing up, Congress was not done investigating. As a result, she objected to the broadly framed decision to destroy records that “neither [the Rockefeller Commission nor the Church Committee] ever saw, but merely “were subject to” investigation. [This] presumably would include files and records relating to assassinations of foreign leaders and other matters which may be of continuing interest to various Congressional committees.”

The Congresswoman’s letter concluded with a clever twist, noting that she interpreted the wording of DCI Bush’s letter to mean that the Agency would wait for the Senate leadership’s affirmative agreement before destroying any records.

This prompted a disingenuous reply from the DCI, who claimed that he only sought to see if there was any Congressional interest. It’s hard to accept this given the Agency’s awareness of the Congresswoman’s attempts to pass legislation, including things that Congress hadn’t had a chance to vote on yet. 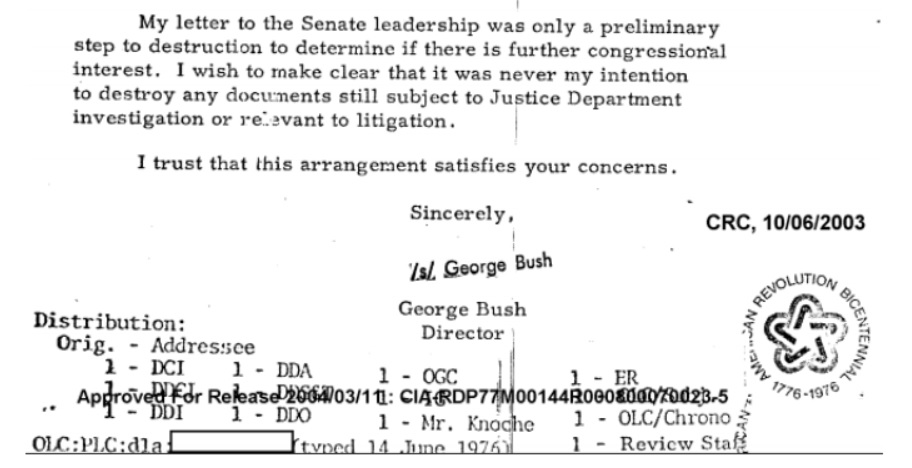 Regardless, her letter seemed to have had some effect. In the DCI’s response, he noted that the Agency had embraced an additional six month moratorium and that any subsequent destruction would be done in accordance with the records retention schedule and consultation with the National Archives.

Regardless of the Congresswoman’s diplomatic letter, she didn’t keep it a secret that she was upset with the Agency, and suspicious. Tim Ingram, a member of Congresswoman Abzug’s staff, made it no secret that they believed “that CIA has engaged in misdeeds and is not above action to destroy the evidence.”

Ingram’s belief may not have been founded entirely in suspicion and paranoia, as he had been told by “a CIAer” that the Agency essentially cooked by the books by using two destruction schedules. The first was the official destruction/retention schedule provided to the National Archives, and a “secret one which it really uses.”

While the Congresswoman and her staff were still unhappy with the Agency’s handling of the matter, no doubt they were happy to see the moratorium officially extended. Whether or not the Agency shredded and burned documents behind closed doors, however, remained out of their hands.

You can read the letters and memos below.