The last section of Malcolm X’s 10,000 plus page FBI file concerns the Bureau’s electronic surveillance of the activist shortly before his death. For months, agents listened to Malcolm’s phone calls, photographed his comings and goings, and even considered bugging his Queens residence - only to hastily discontinue the operation for fear it would taint a potential conviction.

The file begins in March 1964 (the “JUNE” in the corner actually refers to the name of the file), shortly after Malcom had his falling out with the Nation of Islam. 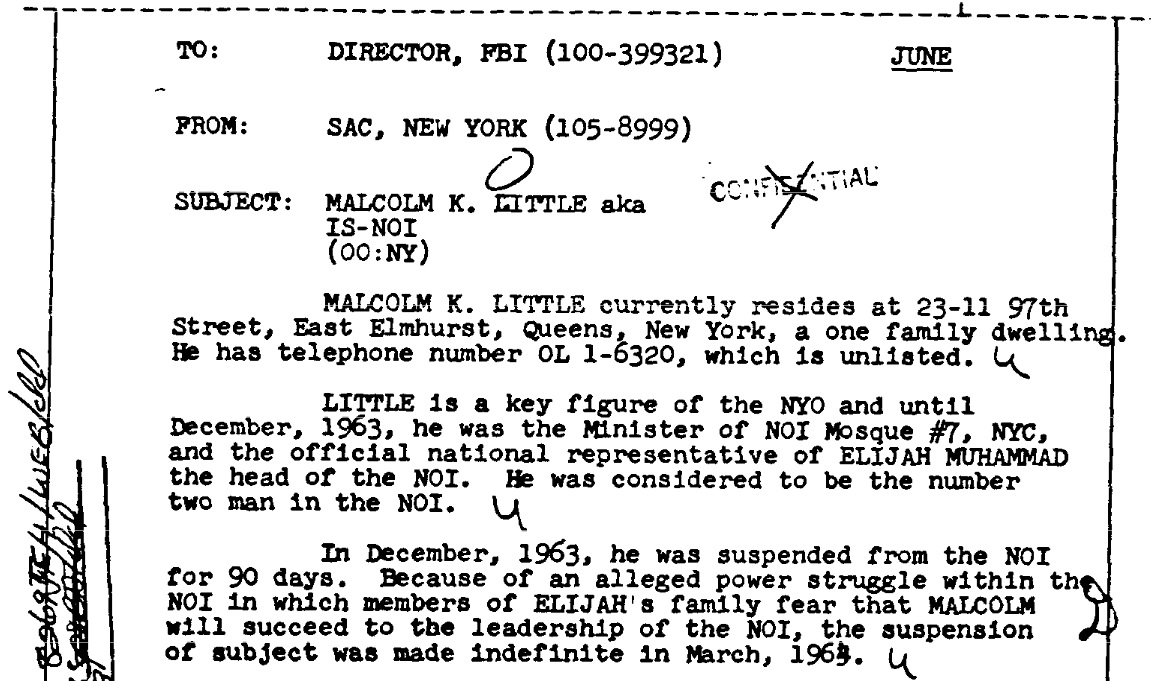 Said falling out prompted Malcolm to found his own organization, Muslim Mosque, Inc. - and gave the Bureau what they felt was sufficient cause to begin electronic surveillance of Malcolm’s home. 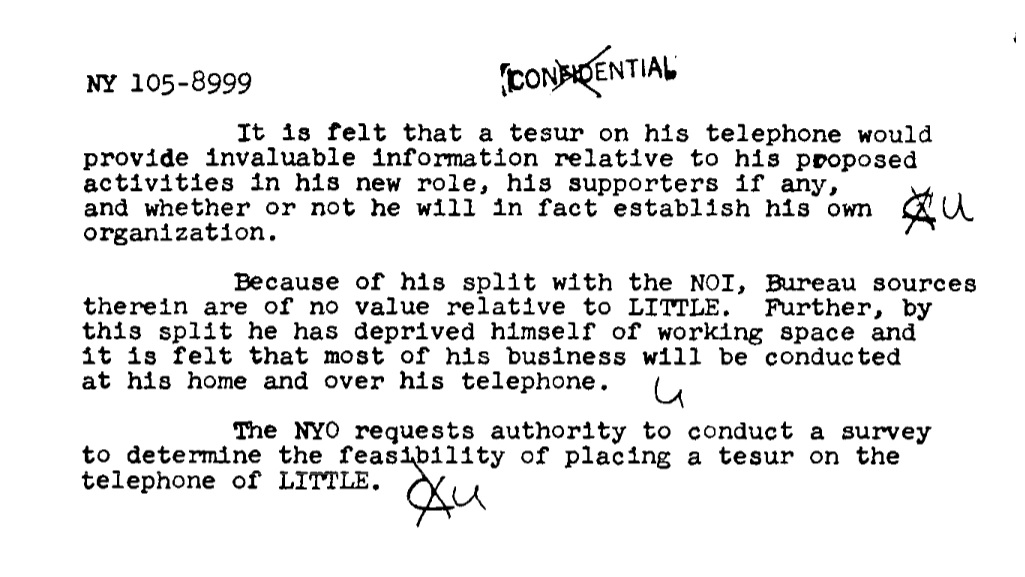 Specifically, a wiretap - “tesur,” like COINTELPRO, was the FBI’s idiomatic shorthand for “telephone surveillance.” Agents were sent out to evaluate the feasibility of a tap … 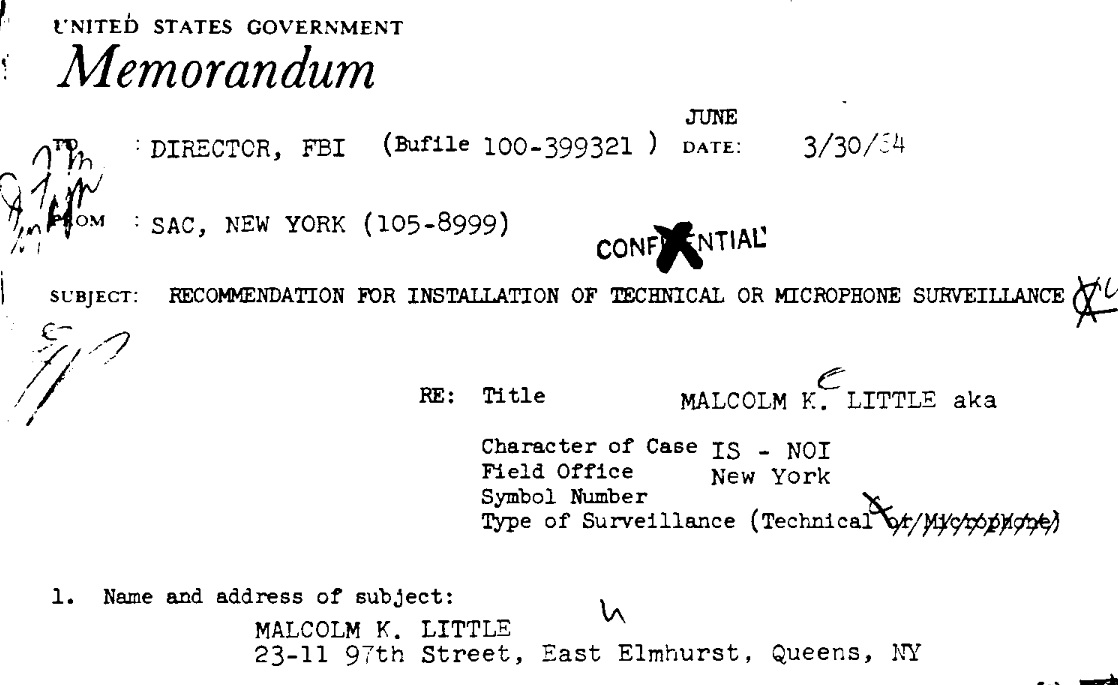 while the Bureau began building a case for why the tap was necessary, pointing to Malcolm’s (completely legal and constitutionally defended) endorsement of rifle clubs for black activists. 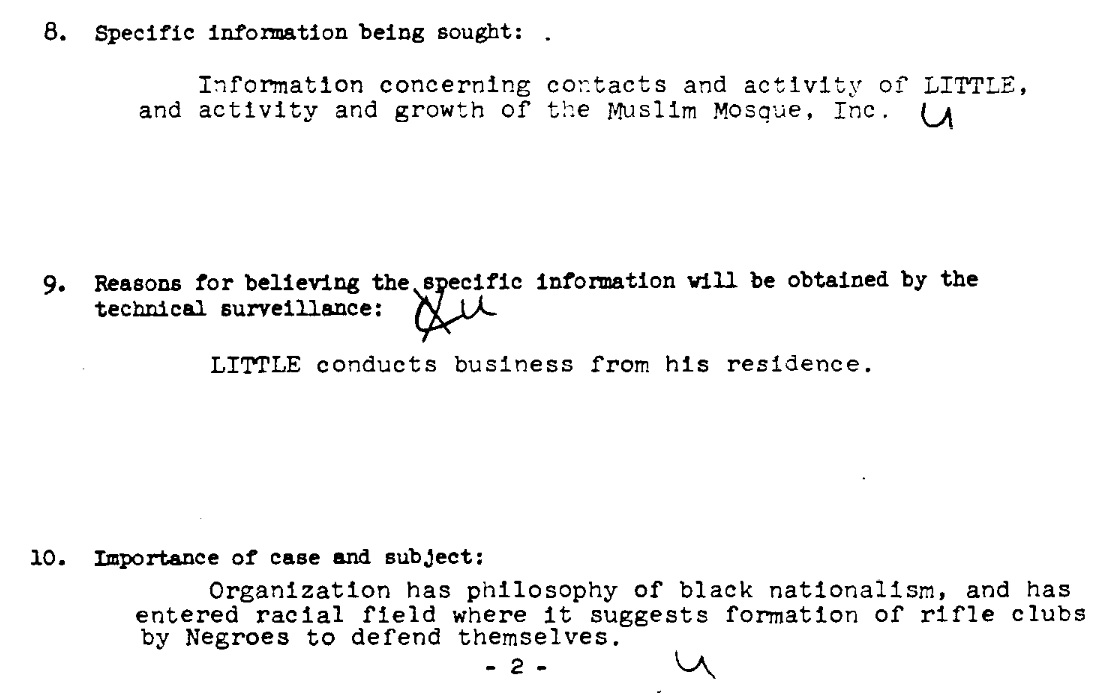 The Bureau did note that information could potentially be gleaned from other methods - most likely infiltration - but it clearly wasn’t their first choice.

After the feasibility study came back positive, and a strong enough case (for the ’60s) had been built, no less than FBI Director J. Edgar Hoover made the request to the Attorney General to authorize the tap.

Approval was given, on the condition that it be evaluated as an intelligence source after 30 days…

and the device was finally installed in early June. (In the late afternoon, if you’re keeping track.) 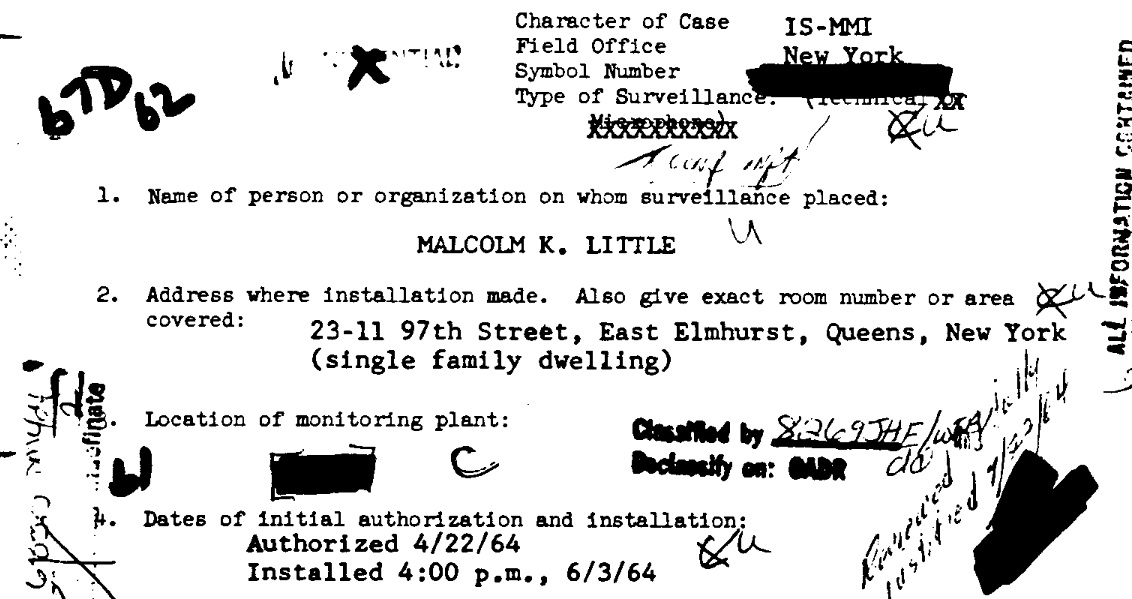 Thirty days later, the Bureau submitted its evaluation, where they found it to be a rousing success, providing valuable intel about Malcolm and his associates - including the odd bit of blackmail material. 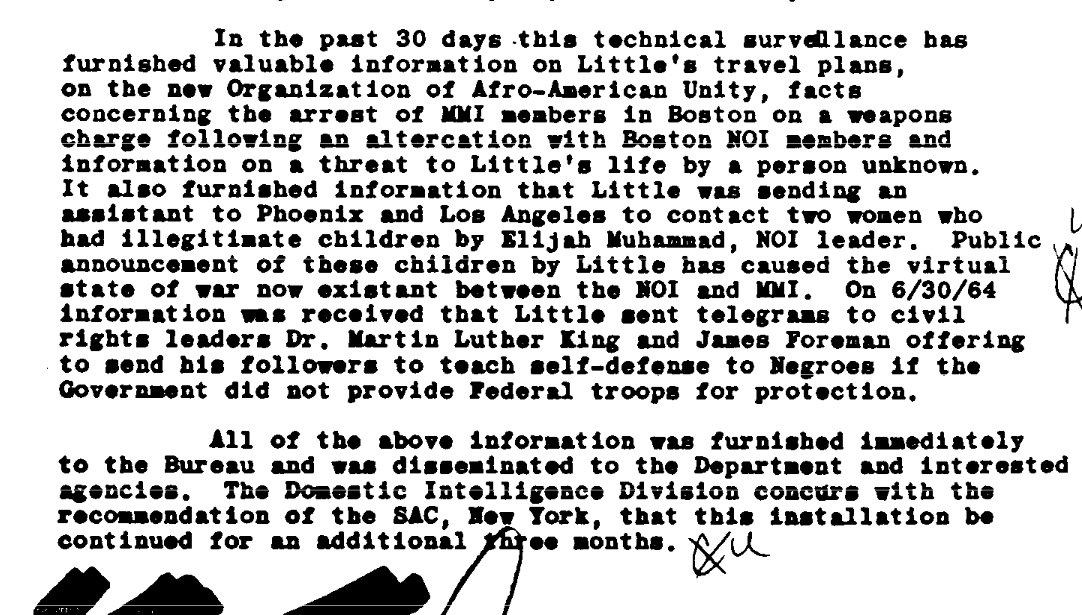 The FBI was so enamored with the wiretap that not only did they recommend keeping it in place, but they expand their surveillance significantly,

They even considered bugging Malcolm’s home, but ultimately abandoned the idea as impractical - not to mention an invasion of unwarranted invasion of privacy for Malcolm’s wife and son.

Ah, but we loveth best what we must leave ere long - just a few months later, in October, orders came in to immediately discontinue the surveillance.

Whence the sudden change? At the time, Malcolm was traveling in Africa - where the FBI believed he was meeting with representatives of Communist China. 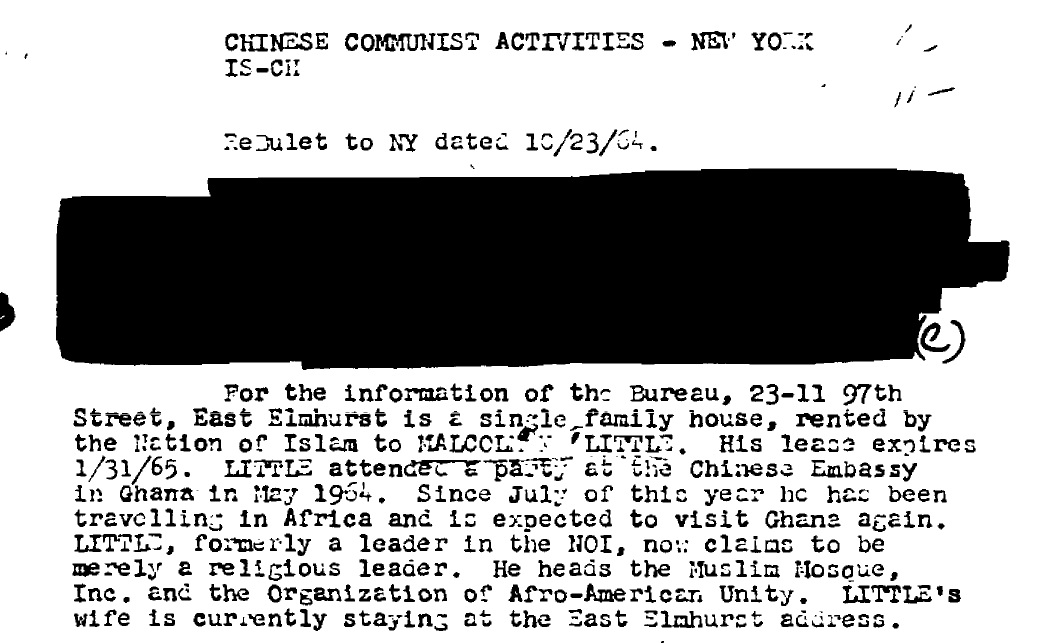 The Bureau thought they had a chance of convicting Malcolm under the Logan Act, which forbids “negotiat[ing] with foreign governments having a dispute with the United States,” and they didn’t want to risk the case with “tainted evidence.”

The tap was gone within a day. 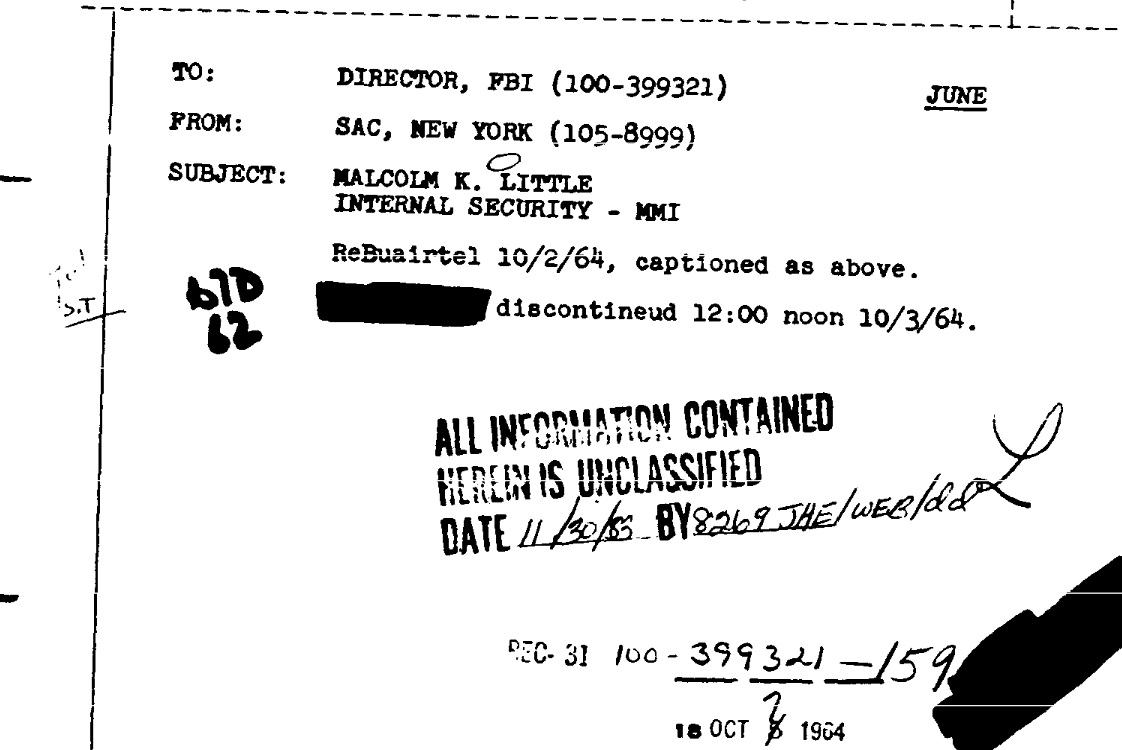 Ironically, one of the agents didn’t get the memo and dutifully filled out the three month evaluation for the now-discontinued wiretap - noting that Malcolm’s ability to “spread Islam among African-Americans” made the surveillance especially crucial.

As an example of the intel gleaned, the evaluation includes evidence that Malcolm and his followers were “making a big issue” out of the attempts on his life, lending credence to the NYPD’s position that the whole thing was a publicity stunt.

Read the full section embedded below, and the rest on the request page: