In August 1970, J. Edgar Hoover discovered an apparent plan of the Soviet Union’s to buy an apartment building - and he knew they had to be stopped. The building, Highview Towers, was located next to the site of the future Soviet Embassy and was the only building in the area that would enable to the government to conduct surveillance operations. The result was a last-second rush by the Nixon Administration to purchase the building.

The sale price, which appears to have technically been for the Highview Towers, Inc. which owned the eight story Highview Towers building, was listed as $1,500,000 (an estimated $9,500,000 in 2017, adjusting for inflation). The $1.5 million would have represented a significant investment on the part of the government, as even with a low turnover and vacancy rate, the total annual income for the building’s rentals came to just under $150,000. As a result, it would’ve taken the government more than ten years to recover the cost of the investment. While it’s not immediately clear who owns the corporation and the building at the moment, with the cost of living and real-estate increases over the last forty years, the building now earns roughly $120,000 every month. A memo from August 4th summarized the financial status of the building. 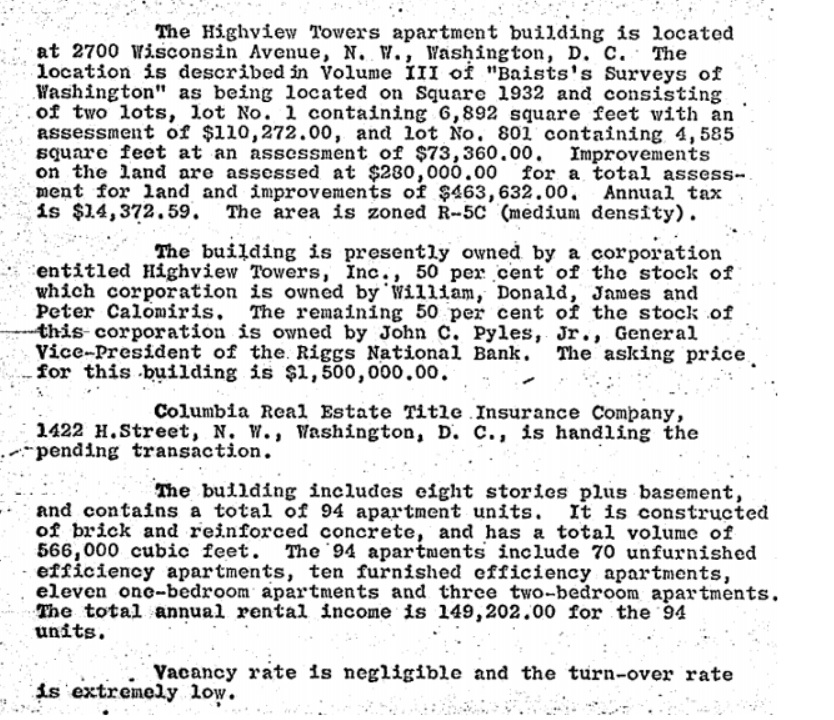 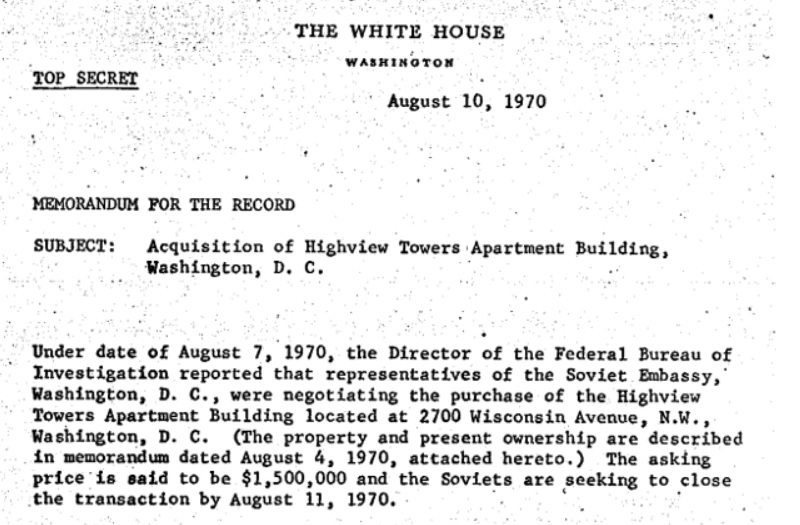 While the memo doesn’t explain why the Soviets wanted the building, Kissinger declared the matter one of national security. If the Soviets acquired the building, the U.S. government would be denied access. The eight story building was the tallest one in the area, and the only with the proper adjacent “view” of the planned site for the Soviet Embassy. Unless they were able to acquire the building before the Soviets did, Kissinger warned, it would “not be possible to conduct essential U.S. intelligence operations against the new Soviet Embassy.”

While the most obvious use of the building would be to conduct remote surveillance of the Embassy by monitoring who went in and out, photographing faces, and picking up conversations being carried out in the building, it’s noteworthy that Kissinger referred to it in the broader terminology of “intelligence operations” and “‘exploitation” of the building. It’s likely that Bureau hoped to use the building as a convenient spot to debrief assets and agents, as well as to pick-up transmissions from within the Embassy - some of these would have involved ordinary remote audio surveillance attempts, though it’s also likely that the Bureau also planned to attempt to place listening devices within the Embassy and then use the nearby building to pick up the transmissions.

Due to the needs of national security, Kissinger authorized funds to be transferred to the Bureau to pre-emptively purchase the building. If needed, the Bureau was authorized to slightly outbid the Soviets.

Kissinger’s memo appears to have been written by member of the National Security Council and the President’s Foreign Intelligence Advisory Board staff member Russell Ash at the request of General Al Haig. According to the formerly TOP SECRET memo written by Haig, the effort was being coordinated by the FBI’s Domestic Intelligence Chief, William Sullivan, and another individual whose identity remains concealed. 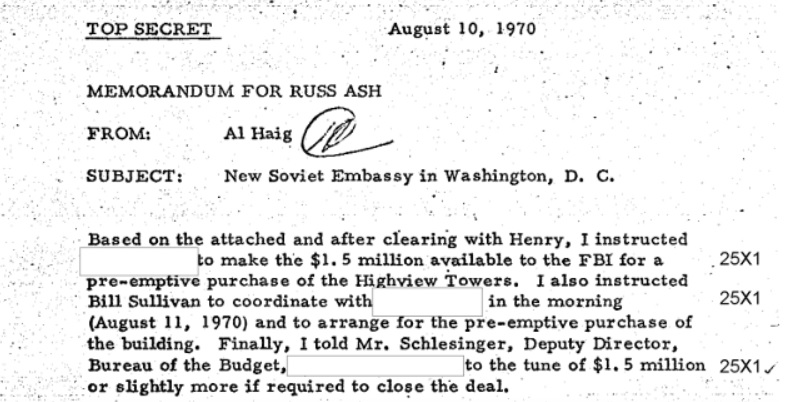 Haig had coordinated the effort with the Department of State, a wise move considering the purpose was to use the building in intelligence operations against an Embassy. No discussion was given to the exact use of the building, only precluding and preempting a Soviet acquisition. Here, as well, Haig stated that the FBI was “to obtain a private purchaser for the site under conditions which would permit its exploitation.”

Since the Bureau was instructed to find a private purchaser to obscure the government’s interest, it’s unclear if they ultimately purchased the building. No references to a successful purchase by the Soviets have been located, however. The closest to an official acknowledgment of a successful purchase is an August 11th letter from Kissinger to Hoover, thanking him for enabling them “to take the steps described” in the other memos. 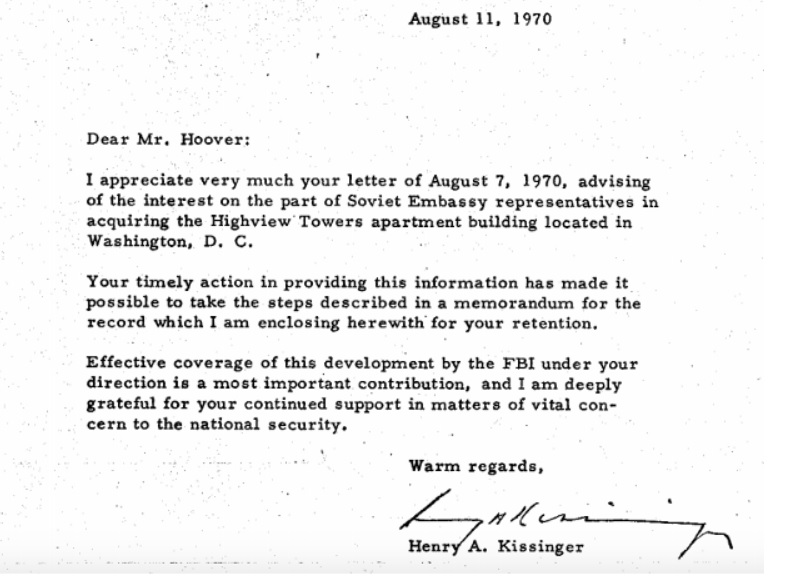 A new FOIA request has been filed with the Bureau to learn more about Highview Towers. In the meantime, you can read the memos from CREST below: