At the same time that Robert Blum was helping shape National Security Council’s (NSC) policies on covert psychological operations and paramilitary actions, Secretary of Defense Forrestal named Blum to the committee exploring the creation of the Armed Forces Security Agency - the direct predecessor to the NSA.

According to an NSA history obtained by the Government Attic, Blum served Secretary of Defense Forrestal’s “non-voting personal representative” on the Committee on the Creation of a Unified Armed Forces Security Agency. 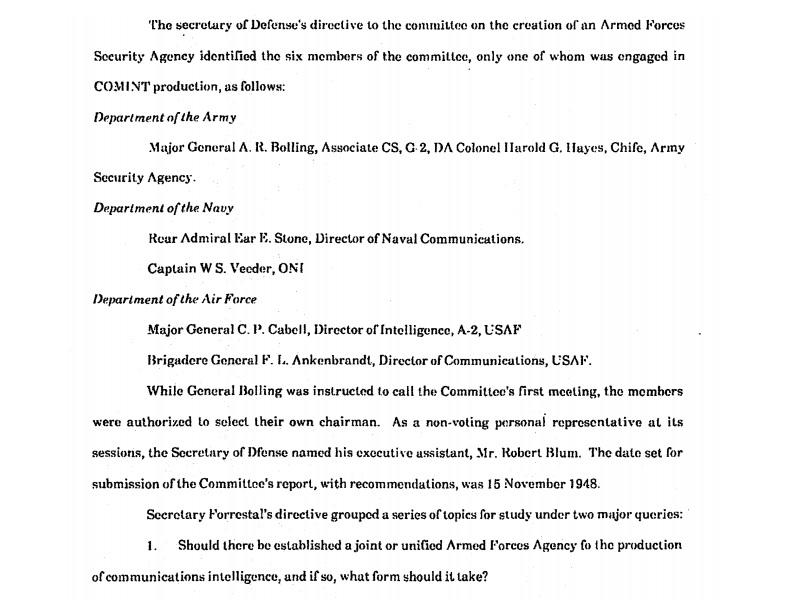 According to CIA’s internally produced history on CIA and SIGINT, previously classified TOP SECRET, the purpose of the Committee was to create a charter for Armed Forces Security Agency (AFSA). Within a few years, the AFSA was replaced with the National Security Agency. 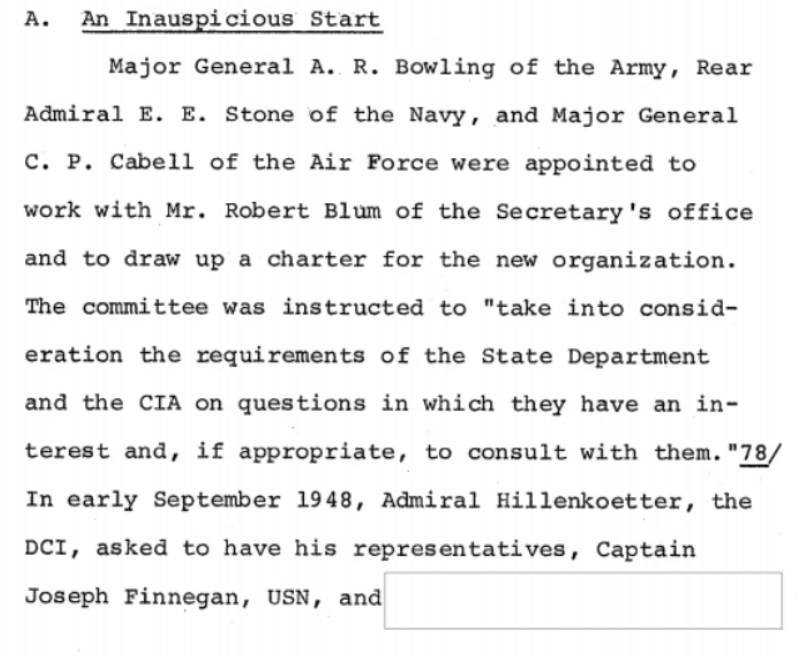 If he had remained on the NSC until NSA’s creation in 1952, Blum might have played a role in the formation of the NSA itself. By 1950, however, he had left Forrestal’s service and joined the Economic Cooperation Administration (ECA) first in the ECA’s mission to France, and then as the Chief of the ECA mission to Indochina, a component of the Marshall Plan. It was while on the ECA mission to Indochina that Blum would survive an assassination attempt by “communist terrorists using bullets and bombs.” 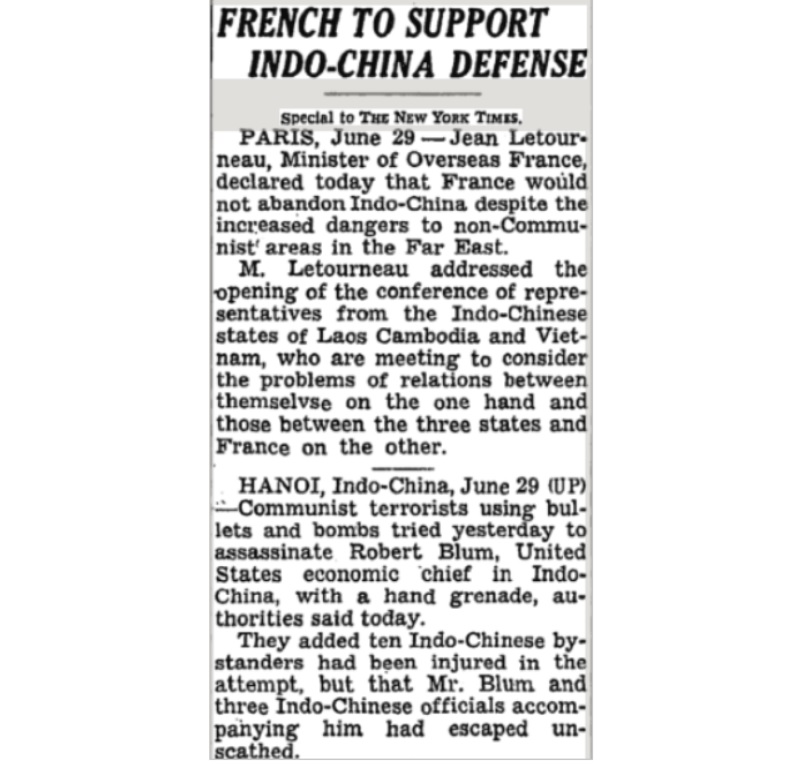 The ECA, however, was no mere economic agency. According to the CIA, the Marshall Plan’s execution was closely coordinated with the Office of Policy Coordination (OPC), which Blum had helped set up. Fittingly, some of the ECA’s programs would eventually be transferred to OPC. This is unsurprising considering the ECA’s explicit role in propaganda along with monetary policy. According to the reported Congressional testimony (attempts to locate an original copy of the hearing transcript were unsuccessful) of one former ECA mission chief, ECA funds were also used to covertly sponsor propaganda which they didn’t want traced back to the United States.

Within the ECA, Blum also served as the Special Assistant to the Assistant Administrator for the Program, Economic Cooperation Administration. It was during this period that he was made the Chief of the Special Technical and Economic Mission (STEM) to Vietnam, Laos, and Cambodia. It was this assignment that caused General DeLattre, the commander of the French expeditionary forces, to call Blum “the most dangerous man in Indochina” due to the role he was playing in the United States’ buildup and preparation for war in Vietnam.

United States Army in Vietnam, Advice and Support: The Early Years 1941-1960, a meticulously cited book published by the United States Army Center for Military History that references primary documents, elaborates further. Blum argued that it was time for the United States to assume a larger military role, and to “assume a direct influence commensurate with our contribution” in the formation of the Vietnamese National Army in one of the United States’ earliest proxy wars. 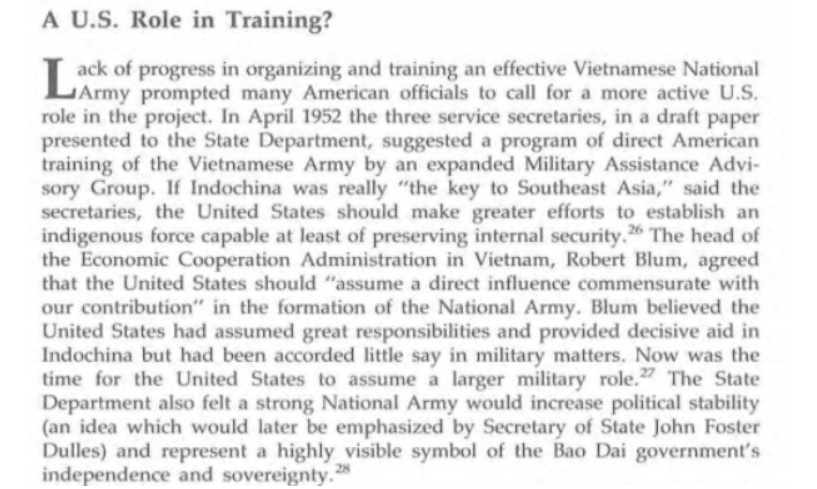 It’s this point that brings us the inaccuracy on the CIA’s website regarding Blum. To the Agency’s credit, the error didn’t originate with them, nor did they endorse it. The article in *Studies in Intelligence* comes with the disclaimer that “all statements of fact, opinion, or analysis expressed in this article are those of the authors. Nothing in the article should be construed as asserting or implying US government endorsement of an article’s factual statements and interpretations.” The information itself came from a presentation which had been previously given and then adapted for the Agency’s publication.

Citing a French publication, the authors state that Blum was the head of STEM in Indochina in 1951, and that this was the same year he became president of the Committee for a Free Asia (CFA), later renamed the Asia Foundation. While it is true that the Blum would become the President for the Asia Foundation, this did not happen in 1951. According to a formerly SECRET memo from the CIA, at the time the CFA’s President pro tem had been George H. Greene. The end of his tenure wasn’t agreed upon until December 7, 1951, after which Alan Valentine was to take over. As subsequent documents confirm Valentine’s tenure as President of the CFA, and with only a secondary source located and asserting Blum was made the President in 1951, this claim about Blum from the Agency’s website can be safely dismissed. 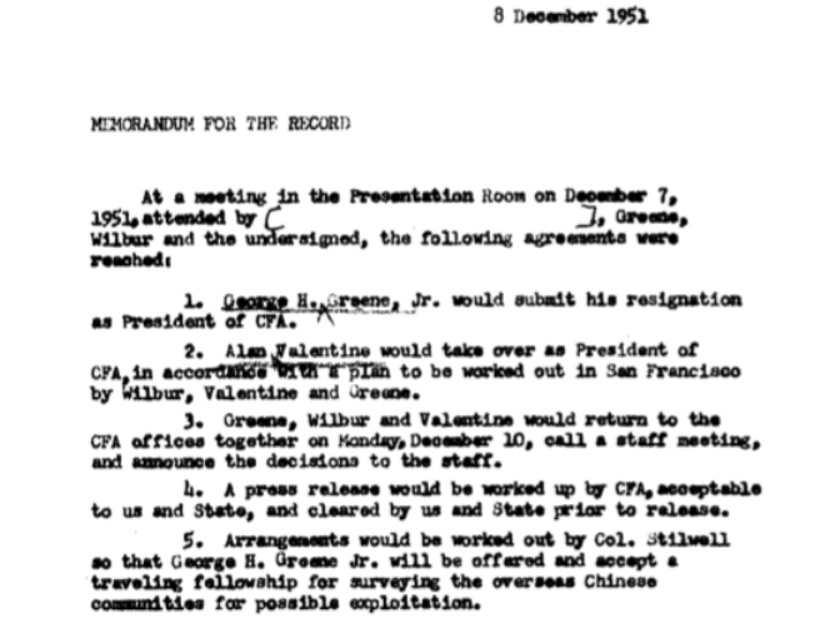 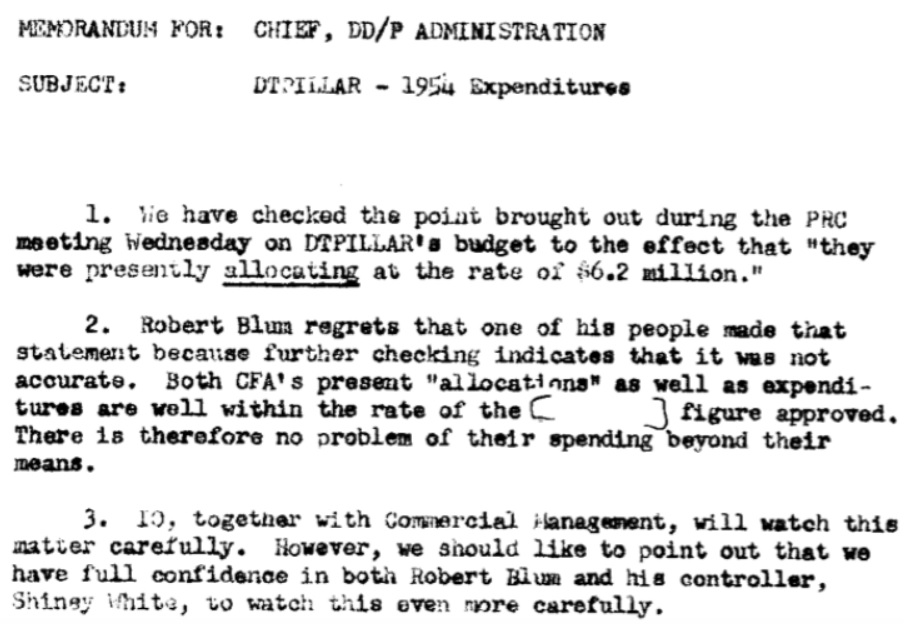 According to Allen Dulles, Blum was back in town to work for the Jackson Commission, more formally known as the Committee on International Information Activities. The Committee’s focus was on information warfare, propaganda, influence operations, with its report leading to the creation of the NSC’s Operations Coordinating Board as well as the United States Information Agency.

At this point, Blum was working for the Mutual Security Agency as the deputy for economic affairs in Europe, the successor to the ECA. It was from this posting that Blum was assigned to the Jackson Committee as the Director of its Staff, putting him once more in a position to help guide the Committee’s progress.

From January through June of 1953, Blum guided the Committee’s progress through a number of issues, many of which he coordinated with CIA Director Allen Dulles before the Committee meetings. These topics included the purpose of covert operations, when they should be used or avoided and how they should relate to foreign policy. Blum also suggested they look at their current and potential ability to conduct covert operations, which would inform their discussion of who should have responsibility for them. Blum was particularly interested in the extent to whether U.S.-identified propaganda should be replaced by non-attributed propaganda and whether or not psychological warfare was “a technique in its own right or an illusion that risks distorting the proper conception of foreign policy as a whole.”

According to a formerly SECRET series of CIA memos, one of the possibilities considered by the Jackson Committee was the “possibility of bringing in private enterprise - the super foundation idea.” The discussion of the question here is significant. While hardly a new idea, as the Agency had sponsored the creation and support of the Committee for a Free Asia/The Asia Foundation (known by the codename DTPILLAR) in 1951, a particular effort that actually went back to 1950, the question of whether to general expand those types efforts was under discussion with the next head of that foundation.

At several points, the Jackson Committee’s Report explicitly discusses the Committee for a Free Asia, which would soon become the Asia Foundation and be headed by Blum. 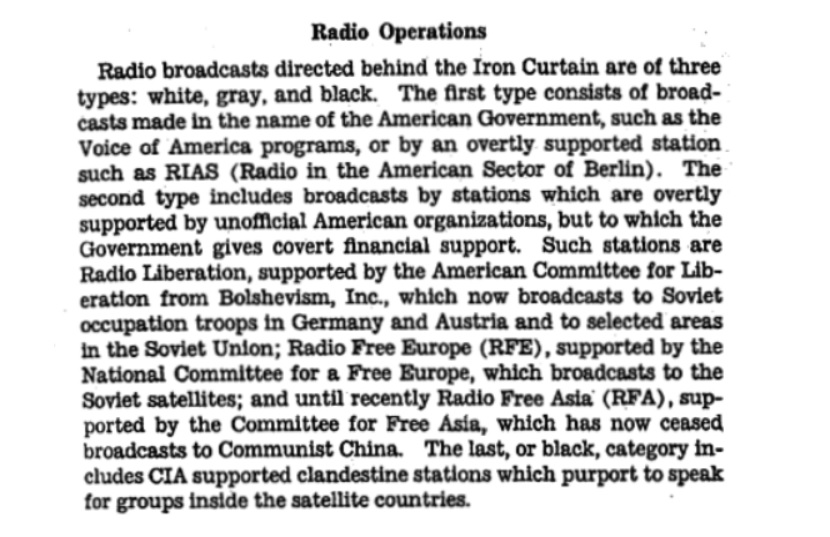 One of the purposes of the Asia Foundation was to allow the Agency to sponsor activities through a technically private organization, which would both enable the foundation to do things the government could, while simultaneously limiting the foundation from carrying out certain activities which the government could. The intention was to get around these pairs of limitations through extremely close cooperation and coordination, while still maintaining a clear degree of separation. With Blum, however, this separation was rather blurred in the beginning.

Shortly after Blum’s time with the Jackson Committee, the Mutual Security Agency which had employed him was dissolved on August 1, 1953 and replaced by the Foreign Operations Administration (FOA) as a result of Executive Order 10477. Under the FOA, the former Mutual Security Agency offices became known as United States Operations Missions (USOMs). By late September 1953, Blum had gone to work for the Asia Foundation, which remain ostensibly independent despite taking direction from and being funded almost entirely by the government. However, as late as November 1954, Blum was still employed by the FOA in one of the USOM offices.

Documents show that later Blum filed reports later that month on his visits to Cambodia and Vietnam made their way into CIA’s classified file on the Asia Foundation, known by the cryptonym DTPILLAR. These reports included information on the political and economic situations, as well as the activities of both foreign and American officials. 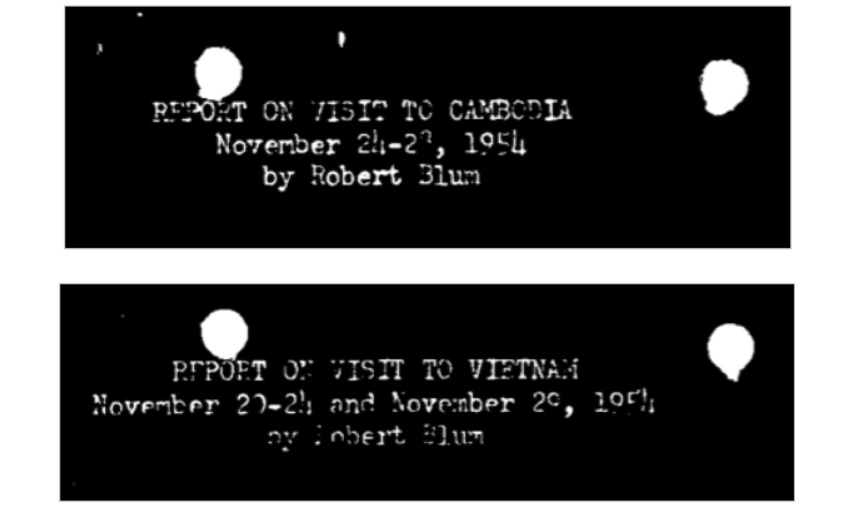 Clearly, there is more to Blum than meets the eye. During World War II he rose through the ranks of the OSS’ counterintelligence division, X-2, becoming first the head of X-2 in Paris and then the the Assistant Chief of the X-2 Branch. For this, he was awarded the French Legion of Honor and Croix de Guerre and the United States Medal for Freedom. After World War II, he made his way to CIA’s direct predecessor, the Counter Intelligence Group and then to the assistant to the Secretary of Defense. From that position, he deliberately pursued a policy that eventually helped lead to the dismissal of the CIA Director. He reorganized the Agency’s operations, from its analysis to its covert operations and propaganda efforts, while helping to create the National Security Agency’s direct predecessor. He help lay the groundwork for the Vietnam War along with the United States’ system of covertly funding propaganda and psychological efforts. When he helped reshape the United States’ system of unacknowledged propaganda a second time, he was involved in discussions considering the increased use of private foundations, one of which he went on to lead. During this time he worked with his controller, “Shiney White”, and continued to report to the Agency while using Agency funds to pull strings across through Asia until he officially retired from the foundation. Following his retirement from the Asia Foundation, he remained active for several years until his death.

Virtually from the shadows, Blum pulled on the strings that reshaped both the Intelligence Community and large parts of the world. Blum’s influence continued to spread under the CIA funded and directed Asia Foundation. This group, as well as the attempts by it and others to erase and rewrite portions of its history, will be explored in a follow-up article.

Image via Wikimedia Commons and licensed under Creative Commons BY 2.0.