Florence, Arizona, an hour’s drive southeast of Phoenix, is home to 10,000 people. Or maybe more like 25,000 people, depending on how you figure.

For what it’s worth, no less an authority than the U.S. Census Bureau choose the latter, including in their numbers as local Arizona residents the thousands of people in cells throughout the city. In fact, it’s how it counts inmates across the States, regardless of their actual state of origin. The discrepancy is just one variable in the matrix of how mass incarceration sets off ripple effects from individual to community to country whenever a prison comes to town. Particularly problematic are private prisons.

With town cooperation necessary for everything from sewage to sales, the relationship between company and host encourages a new set of conditions beyond benefits like taxes or jobs. For all the purported perks of a corporate prison sponsor, these towns highlight, in bits and pieces, the instabilities in rural community economies, the criminal justice system, and the places they intersect.

Florence itself has a total of nine correctional facilities, five of which are private. It’s what one could call a “prison town.” The term came with the nineties phenomenon of restless rural prison construction, which, much like mandatory sentencing laws and Furbies, will continue to haunt us, presumably until they are eliminated or we all die. By one estimate, the U.S. was averaging one new prison every 15 days in the last decade before Y2K .

The aptly-homophonic Pinal County, home to Florence and its southern neighbor Eloy (which has another four CCA facilities), was no stranger to the boon; not-so-coincidentally it was named the one of the fast-growing counties in the post-millennium years .

Eight hundred miles east, Sayre, Oklahoma also found itself bit by the prison bug as the century turned. With little hope that America’s ballooning prison population would deflate any time soon, it was among the communities, along with plenty of stock-savvy individuals, that bought in after CCA and Wackenhut joined the Wall Street fray and prisons became one of the “it” industries to invest in.

In the swaths of country that live like it’s recession season year-round, the brew that brought prisons speaks to a sort of desperation. The Not In My Backyard (NIMBY) environment has an interesting cross-section in such situations - the “N” could easily stand for “Necessary.” Banking on prisons seemed a viable enough effort toward economic development: Florence, for one, has been able to build an economy around its prisons.

Sayre’s North Fork Correctional, on the other-hand, has faced a less certain future. Like other facilities that have imported prisoners, its stability has depended on the failure of other states that have since moved to keep fewer prisoners all-together and closer to home - in this case, Wisconsin and California, whose after-action reports on its operations carry a public records price tag of almost $700.

North Fork will soon be under lease to the state’s Department of Corrections, which may make for a more stable existence. That was, after all, what they were in it for.

Beyond the “how many-where-how much” understanding of who’s hiring the work, other agreements, tacit and typewritten, are made. Income from taxes and the assumed revenue from residents who now have jobs are an assumed benefit - a minimum number of local hires might be included as a clause in the contract between company and county, or flat fees or inmate kickbacks may contribute to the city’s coffers.

In exchange, the town needs to show its willingness to play ball. When the prison wants to expand, for example, more water and sewage capabilities are needed, which means construction. Florence and Sayre have both participated in such agreements.

While Sayre shouldered the costs itself.

The relationship between town and company in these situations smacks of a “we’re in it together” attitude. Sayre, for example, agreed to help CCA receive state business incentives, while the company agreed to cooperate if the town wanted to apply for grants to cover those couple hundred thousand dollars of construction fees.

This relationship can be something like a quick hit whose benefits not only evaporate but whose side effects disproportionately affect the rest of the state.

In Sayre, the population count disparity contributes to a problem known as prison gerrymandering. According to the non-profit Prison Policy Initiative, which has focused on the issue, prisoners held in federal prisons or are imported to private prisons like North Fork Correctional Facility “are counted not just in the wrong district, but in the wrong state.”

The situation becomes one in which the relative strength of individual votes in a prison-heavy area are inflated while the hometown representation of the incarcerated population is cut short. The constituents of a district drawn, for example, around a town of 1,000 people, half of which are prisoners, would have twice the strength per vote as those in a town of 1,000 freely-voting people. In Oklahoma, PPI points out, this can create districts where one wouldn’t qualify under the law. In Pinal County, however, and to its credit, the method of discounting the Census Bureau’s tally is a way of keeping local election power from becoming artificially-inflated. 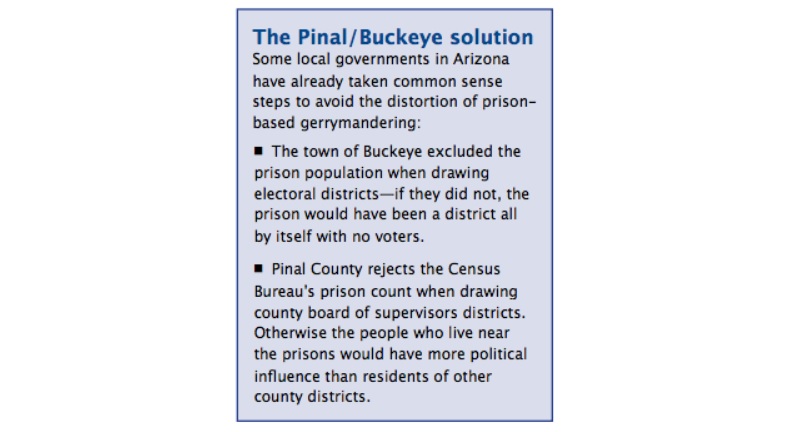 As we’re hearing time and again these days, in criminal justice, there isn’t a one-size-fits-all solution but mass incarceration isn’t working for anybody, and it’s these sort of local level complications - the space allowed between a town of 10,000 and 25,000 - that piecemeal form the landscape today.

Check back on Thursday for Part 2, a look at the other bonds that try to tie towns and prisons.

Beryl Lipton sent this request to the City of Sayre (OK) of Sayre, OK