A crime is committed in a state. The suspect’s tried, convicted, and sentenced there, and there’s a general expectation that then the punishment will play out close to home — unless it happens that one lives in a state like Vermont, with a correctional system so overcrowded that some prisoners must be shipped away to a facility somewhere else.

There are currently hundreds of Vermont individuals being held in a facility in Michigan, with space slotted for as many as 675. Vermont, which has only 7 adult in-state correctional facilities, has contracted with private prison companies for years, sending their prisoners to out-of-state locations capable of holding the overflow prison populations.

Since 2004, the Green Mountain State has been paying Corrections Corporation of America for space in Florence Correctional Center in Arizona and the Lee Adjustment Center in Kentucky. That contract was not renewed upon its completion at the end of June, and a new agreement was penned with its rival, GEO Group, for space at the then-vacant North Lake Correctional Center.

At the price of $61.80 per diem, the Boca Raton-based correctional giant beat out CCA and bids for fewer beds at facilities in nearby Albany ($68 per diem) and Rensselaer ($110-120).

The review committee report, issued February 17, 2015, was among materials provided recently by the Vermont Department of Corrections, which has been under the too-common crush of a bloated prison population.

Among the criteria considered under the Request for Proposal was the issue of transportation of inmates from Vermont to the new facility twice a month. On that metric, GEO’s Michigan location scored a 10 out of 10 possible points, tying with the New York facilities, based on the assessment that it would require only “moderate distance of travel for staff,” with inmates transported via plane. 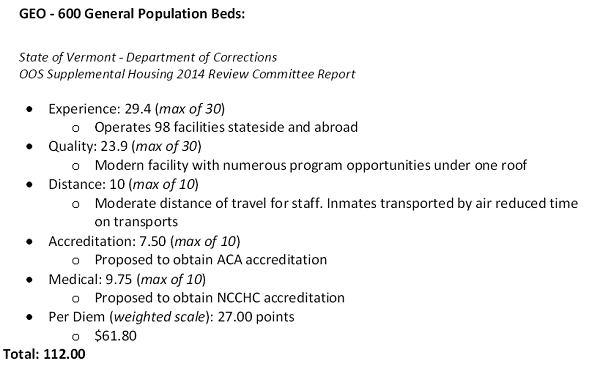 The issue of sending inmates to remote locations far outside of the State has earned its share of detractors; among the obvious reasons is that travel for family and friends is often prohibitively expensive.

Presidential-hopeful Vermont Senator Bernie Sanders, when asked at a recent gathering in his neighbor state of New Hampshire, said that, “yes, yes, yes” he would help to “shut down the for-profit prisons” with a focus on immigration reform.

“[I]t seems to me that rather than spending huge amounts of money on jails and on private corporations who are incentivized to keep people in jail,” Sanders said, “it might make a lot more sense to spend money on job training and education so that people do not end up in jail in the first place. And yes I’m certainly in favor of comprehensive education reform.”

On the receiving end, the area of Michigan served by State Representative Jon Bumstead now has an operational facility, which will provide jobs. Bumstead was instrumental in facilitating the deal - among materials provided with the contract, an undated letter from Bumstead stated that local recruitment of staff would be “providing much needed employment opportunities for locals.”

Bumstead also introduced House Bill 4467 to the Michigan House of Representatives in April, which was swiftly passed into law; it permits a private contractor to provide services to any other agency.

Officials in Kentucky, which once but no longer relies on privately-contracted supplemental housing, were eager to help Vermont in their effort to transfer operations somewhere else. In October, the Kentucky DOC Commissioner provided a letter stating the Department’s willingness to assist with logistics.

Collections of inmate complaints have already been solicited from the facility, but it’s too soon to tell whether this arrangement will work out more successfully than Vermont’s last. Concerns regarding the difficulty of oversight from out-of-state, which were voiced while Kentucky and Arizona were involved, remain valid.

Assurances that notification of deaths and incidents will occur are not wholly believable. CCA in their rebid for the Vermont contract, for example, responded that they would comply with expectations regarding inmate deaths, but the Associated Press recently reported that one such death had occurred in their Lee Adjustment Center and the death was not reported to local authorities for weeks. 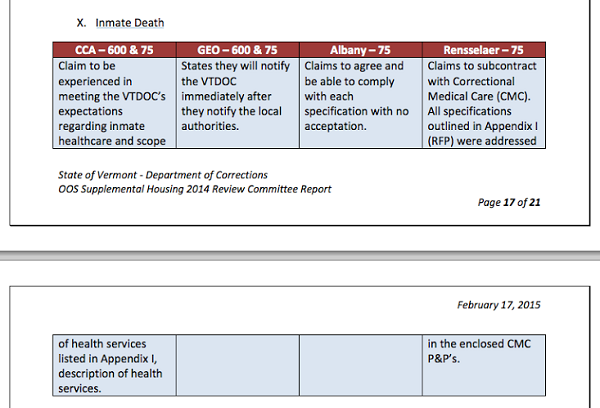 California, Idaho, and Hawaii currently also house inmates in other states. As prison populations overflow states’ limits, CCA and GEO are aggressively insuring that they’ll be there to catch the extras, making the transfer of prisoners for profit a coast-to-coast operation.

Concerned about prisoners being sent across state lines, either to private or public facilities? Let us know at info@muckrock.com and we’ll help you start looking into how interstate inmate transfers affect you.