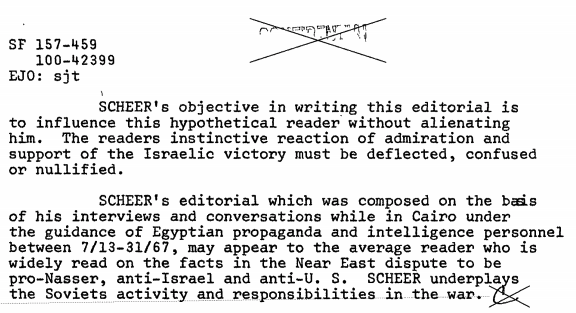 A 1967 letter from the San Francisco office to Director J. Edgar Hoover suggested that the Bureau take advantage of a possible opportunity, investigating and publicizing any resulting factional splits within Ramparts. According to the Bureau, Ramparts’ “staff and its leaders are politically conscious and therefore, subject to dissension and deep division.” Articles on this could “would magnify the problem and expose the embarrassment of its staff.” 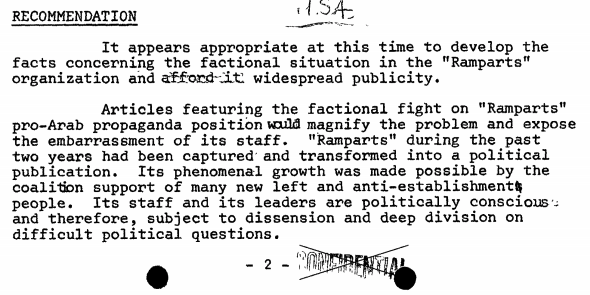 The San Francisco office felt that this shouldn’t be left to chance, and that they should contact “select correspondents or representatives of other publications or news services” about the mater. If any were interested, they could be “briefed” by the FBI, and write an article designed to develop schisms in Ramparts’ staff and support structure.

Hoover responded that they had no record of the individual, either of his investigation or utilization. Hoover required additional information before he was willing to make a decision about utilizing them “to develop … a newspaper article discrediting Ramparts.” 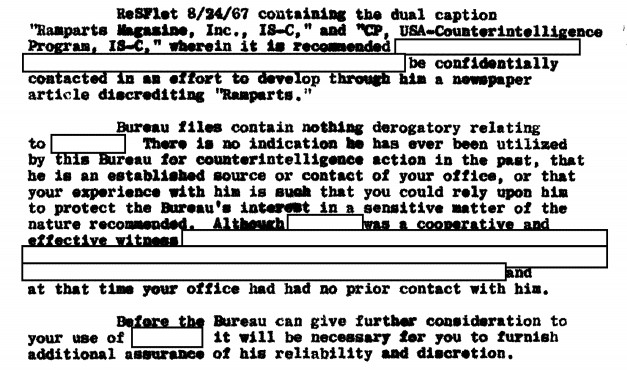 Specifically, San Francisco wanted to paint the magazine as anti-Semitic for its criticism of Israel, a recommendation placed immediately after a note of Rampart’s expose of the CIA.

Parts of San Francisco’s analysis weren’t based on an “impartial and factual” reference point, “but from the viewpoint of a hypothetical average subscriber.” The FBI felt that the average subscriber felt a “deep dissatisfaction” which was responsible for their “social criticism and political dissent.” The average subscriber was sympathetic to “Jewish acquaintances, Israel, Jewish culture and Jewish suffering of Nazi persecution.” By equating Jewish people and Israel, the Bureau felt they could use criticism of Israel to turn Rampart’s presumed average subscriber against the publication.

It’s not immediately clear from the files released so far whether the Bureau pursued this strategy. While that course of action would have had the FBI investigate Ramparts and then leak that information to the press in order to discredit the outlet, it doesn’t appear that the Bureau considered using false information to do so. It’s noteworthy that the FBI didn’t consider the information itself to be important for the public to have, but rather that the information could further social and political divides within Ramparts and its financial supporters, who the FBI believed had “emotional and deep nationalistic sympathies for Israel.”

MuckRock has filed an additional FOIA request to learn more about this particular chapter in the FBI’s history and how COINTELPRO did and didn’t target Ramparts and other journalistic endeavors that exposed scandals and outrage. In the meantime, you can read part of the file below, and the rest on the request page.