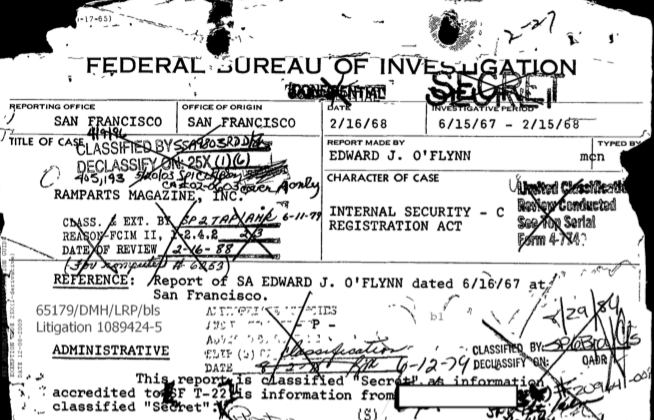 Though portions of the file remain classified, the nearly hundred page dossier details significant portions of the investigation. While much of the dossier deals with the financial aspects of Ramparts’ operation, it also accuses the outlet of being a front for foreign agencies. While details of this accusation remain redacted, the file synopsis reveals that it is based off of “foreign contacts” which reportedly showed that “source material received from foreign agencies” appeared in Ramparts. 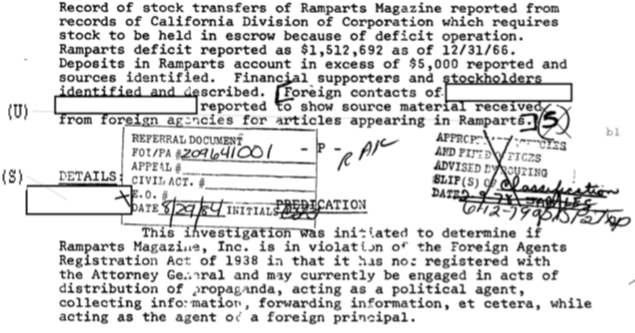 While the nature of this information and the foreign agencies isn’t revealed in this release, nor are its sources, a file released by the Government Attic reveals that the Bureau’s sources for information relating to Ramparts included representatives from The Asia Foundation, a Central Intelligence Agency front. 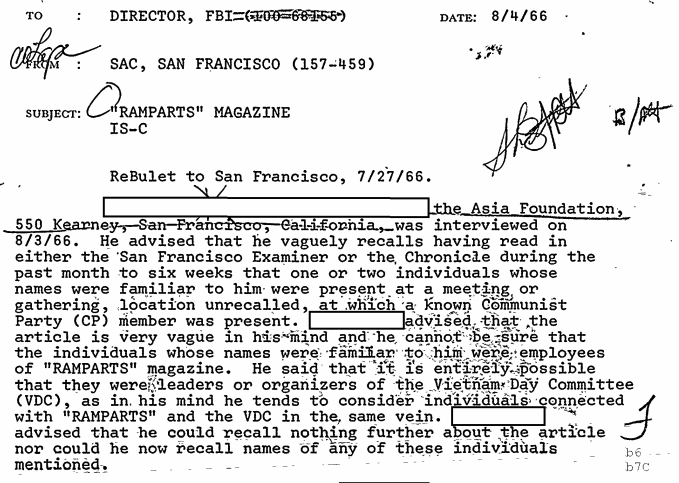 While the recently released file doesn’t explain what type of information the Bureau suspected Ramparts received from foreign agencies, the file released by Government Attic does address the issue at points. One memo to the FBI Director accuses Ramparts of being “a virtual official propaganda arm of Soviet Russia.”

Another memo from the FBI Director, issued as part of the Bureau’s COINTELPRO interest in Ramparts, states that the magazine’s exposure of CIA funding of the National Student Association was “inspired by the Soviets as a disinformation operation.” 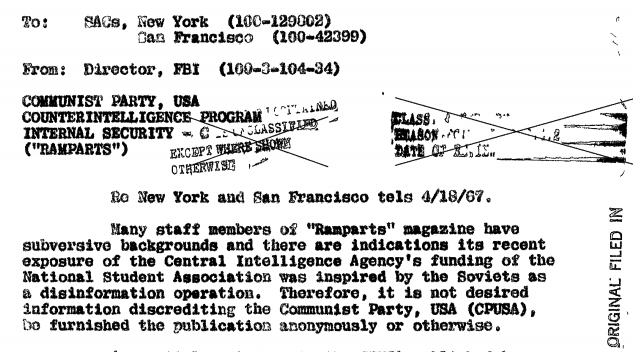 As the Agency would confirm in numerous classified documents, this “disinformation” was accurate and the funding only ceased as a result of Ramparts’ exposure.

Although much of the FBI’s dossier focused on Ramparts’ financial supporters and subscribers, it also devoted two and a half pages to what it described as the magazine’s subversive foreign contacts. Out of this, only one page is unredacted. The document describes two different confidential sources reporting that Mike Ansara of Ramparts had expressed interest in traveling to Cairo, where they and an unidentified individual reportedly hoped to interview the president of the United Arab Emirates. 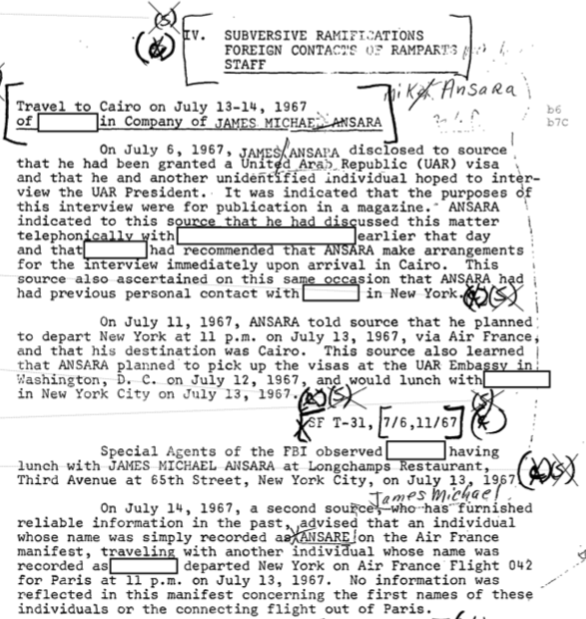 Ramparts’ desire to interview foreign leaders for their reporting was hardly a unique concern for the Bureau. Immediately after falsely claiming that the magazine’s editor had admitted to lying about having information about the murder of civil rights workers (as the New York Times makes clear, the information existed by the government’s threat of indicting witnesses and putting their lives at risk resulted in a predictable chilling effect), the Bureau points out that the editor had expressed interest in interviewing Fidel Castro. This stance was clearly hypocritical of the government, as then-journalist Richard Helms’ interview of Adolf Hitler launched a career that culminated in his becoming the Director of Central Intelligence. 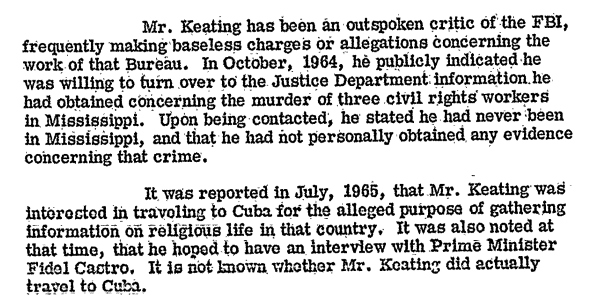 It’s unclear from the files how the Bureau justified seeing a journalist’s desire to interview major world figures as “subversive” and signs of being an unregistered foreign agent. It’s also unclear why the Bureau considered accurate reporting, such as Ramparts’ exposure of the National Student Association’s relationship with CIA, to be “disinformation.” The claims do make clear, however, the government’s capricious standards. Accompanying documents leave little doubt that the key factor to the government was the willingness of an individual or outlet to criticize the government and the wars it engaged in.

Numerous additional FOIA requests - including for the complete FBI file on Ramparts - are being filed by MuckRock to learn more about the FBI’s investigations of Ramparts, its staff, contributors and supporters. In the meantime, you can read the dossier below, or the Government Attic’s release here. You can also read the full 29,000 pages of the FBI’s Reagan file, in which the Ramparts dossier was located, here.

Announcing the winners of our FOIA contest!