In early 1983, Aviation Week and Space Technology printed an article reporting that the head of Central Intelligence Agency’s Intelligence Community Staff went before the Armed Forces Communications and Electronics Association and claimed that FOIA was a tool of Russian intelligence. According to Rear Admiral Edward Burkhalter, “just by asking the right questions, the Soviets are able to pull from federal government files reams of technical data not otherwise available to the public, much of it only recently declassified.”

The problem was, the Agency had no basis for the claim - something they were forced to admit as a result of a FOIA lawsuit filed against them.

Four days after the issue of Aviation Week and Space Technology, a lawyer named Paul Rosa filed a FOIA request that sought to get to the bottom of the issue. The FOIA request asked for copies of requests filed by Soviet agents, as well records released in response to those requests. This FOIA request ultimately became a lawsuit brought by the local attorney. 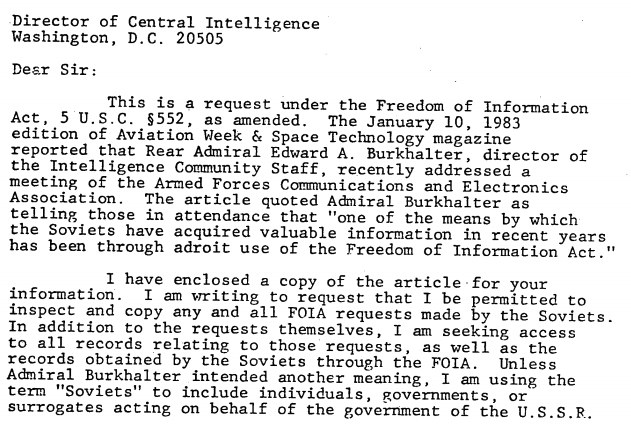 Ultimately, the CIA was forced to admit that there were no such requests, and no evidence that Soviet the government or intelligence agencies were filing FOIA requests to force the inappropriate release of information that aided in the design of their weapon systems and attempts to counter American technology.

According to one article about the lawsuit, the Agency “was unable to recover a single FOIA request by the Soviet Union and only a single request by the Polish Embassy for a memorandum on Agency-Academic Relations.” The speech relied on the research performed by the executive assistant to Burkhalter, David Muller, Jr. Muller, who also wrote the speech, testified in an affidavit that he relied on a paragraph in a 1982 Senate Government Affairs Committee report. The actual paragraph, however, didn’t support the assertion. Instead, it provided “only the broad assumption that ‘The Soviets are able to purchase every one of the 80,000 technical documents issued each year by the (unclassified) Commerce Department’s Technical Information Service.” 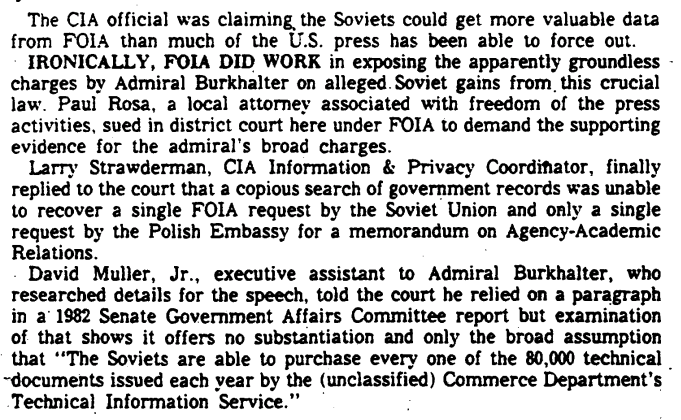 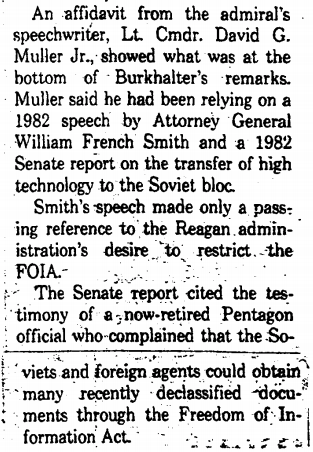 According to another article, the Senate report cited the testimony of a former Pentagon official who opined that “foreign agents could obtain many recently declassified documents through the Freedom of Information Act.” As this article does not provide a quote and neither article cites the specific report, it’s unclear if this is actually a reference to the technical documents from the Commerce Department described above. The article also reported that Muller’s affidavit reported he had also relied on a 1982 speech by Attorney General William Smith. According to the article, the speech in question “made only a passing reference to the Reagan Administration’s desire to restrict FOIA.”

MuckRock has filed a new FOIA request to learn more about these claims and the government’s response to their falseness being exposed. In the meantime, you can read the original FOIA request below.