The Central Intelligence Agency’s declassified archives include several copies of one of its long-term plans, produced in 1980 and originally classified SECRET. The copies of the Summary Report reveal two things about the Agency: it was, in the immediate lead-up to the Reagan administration, determined to expand its scope of operations and collections, and seemingly to increase its covert activities, and it’s either negligent or incompetent when it comes to figuring out what’s actually classified and deciding what files can be released. 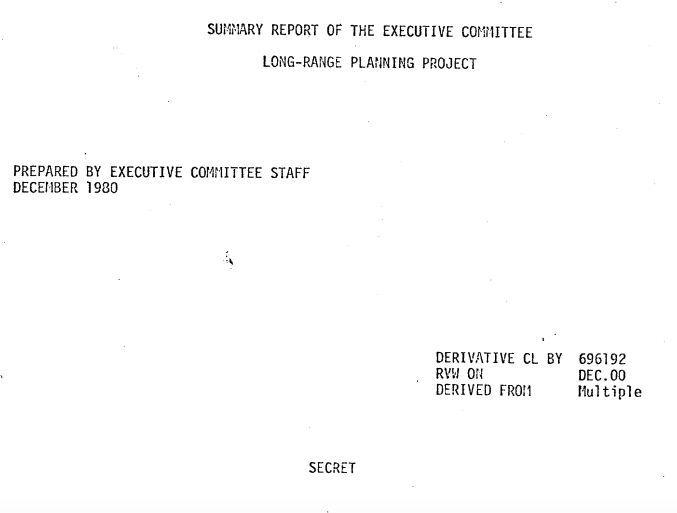 Copies of the report were reviewed and release between 2002 and 2009, and show a stunning lack of consistency and self-awareness. The first copy was declassified and released with a handful of redactions in January 2002, but by April 2003 the Agency had decided that half the document was not only still classified but exempt from declassification, citing 25X1 - sources and methods.

According to the same release, even the document’s original classification was bizarrely held as still classified and exempt from declassification, a claim again bizarrely justified by claiming it was necessary to protect sources and methods.

By July 2005, the Agency had reversed its decision, and released another copy of the document with similar redactions to what it imposed in 2002. A virtually identical copy of the report on the Agency’s long-term planning was released in September 2006. By April 2009, the Agency had done a complete reversal and decided that that entire document needed to be redacted, with the partial exception of the cover page. 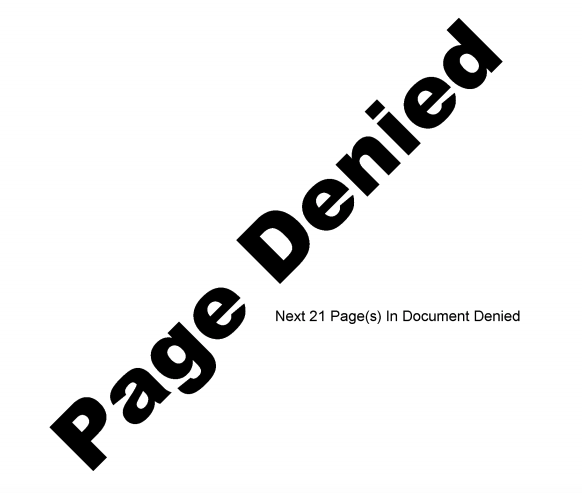 As for the report itself, none of the released of the document seems even arguably eligible for a “sources and methods” exemption from declassification, much less an attempt to reclassify information already officially disclosed. So what is in the 1980 report? As described in the report’s cover letter, written by Deputy CIA Director Frank Carlucci, the report dealt with the “major issues with which the Agency must deal in the 1980s” and “substantially increased resources for some major CIA facility [sic] and system improvements.” (The AIUO stands for Administrative Internal Use Only.)

The report presented six key findings. The first acknowledged that the Agency was ‘increasingly diverging from its traditional focus’ on Communist militaries in favor of “a broader and more complicated range of intelligence topics in a larger number of countries.” It also, along with the second finding, argued that the Agency’s budget and resources weren’t up to the task, and it would take “large capital improvements,” requiring finding ways to acquire significant additional resources to avoid “catastrophic degradation” in the Agency’s operations. 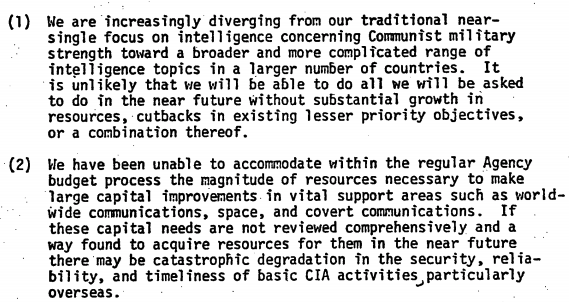 In a finding and recommendation that seems prescient of the Reagan era, the report proposed the Agency “develop an overall philosophy” for covert action, and “more sophisticated analyses of political action to achieve U.S. goals.” It also argued that the Agency need to develop and maintain “standby capabilities for paramilitary use.”

The key findings went on to state that the Agency needed to invest heavily in research and development for technical operations, including “SIGINT and overt broadcasting and collection techniques.” This was especially important, according to the Agency, because when it came to providing communications equipment for cover operations, they had “not been successful for technical and financial reasons.” The report’s findings also concluded that the report was important, and needed to be repeated and increased in scope in the following years. 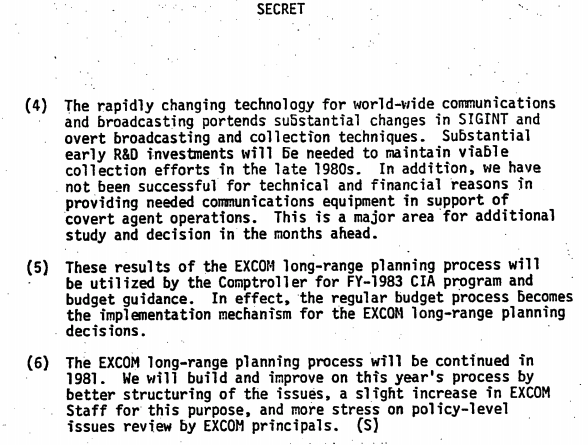 The report summarized a number of projected changes impacting CIA’s operations. The most ironic of these was the prediction that the U.S. would be driven by ‘a desire not to be viewed as a major obstacle to world peace.’

In some ways, the report was certainly ahead of its time. Long before the “going dark” debate entered the mainstream, the Agency predicted that “mass encryption could pose problems for SIGINT and other major collection systems.”

When it came to covert action, the Agency stressed the need to have “in-place agents” for work which remains redacted in every known public copy of the document. 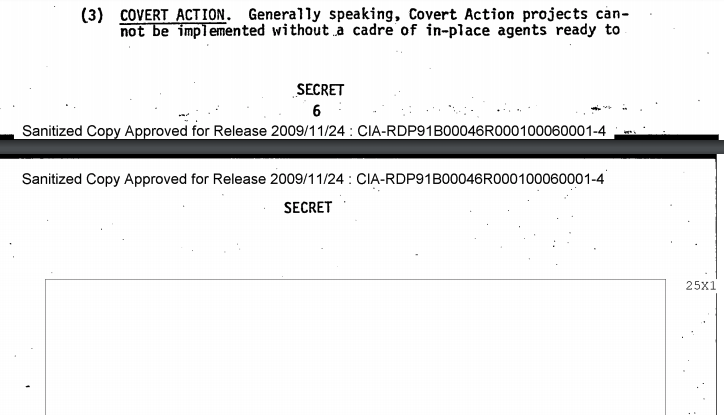 The report provides a minor glimpse into the Agency’s planning efforts and thinking the early 1980s, in the immediate lead-up to the election of Ronald Reagan, which marked a distinct period for the Agency. The report was followed by a series of ten paper focusing on “micro-issues,” which MuckRock has requested along with versions of the report from subsequent years. In the meantime, you can read the report below, or you can read a copy of the much more extensive Long Range Plan of the Central Intelligence Agency (circa 1965) here.