For years, accusations of KGB penetration of the Government Accountability Office helped further the Central Intelligence Agency’s efforts to pit the Congressional committees against GAO. In the early 1980s, an opportunity presented itself that would deepen these divides without any action from CIA.

While CIA watched the affair closely and would become involved towards the end, it appears to have unfolded without any direct encouragement from the Agency. The strange story shines a light on how tenuous the GAO’s access to the Intelligence Community was, while setting the stage for a later CIA victory in cutting GAO even further out of the loop.

By complaining about leaks in 1977 relating to the anticipated sale of “AWACS planes [which] appeared to have been divulged by GAO,” CIA set in motion the events that would ultimately lead to accusations of Soviet penetration against the GAO. GAO would deny those accusations as well as the initial accusations regarding the AWACS leak, arguing that the leak likely came from the Pentagon. An official at the Pentagon would later confirm that they were, in fact, the source of the leak. 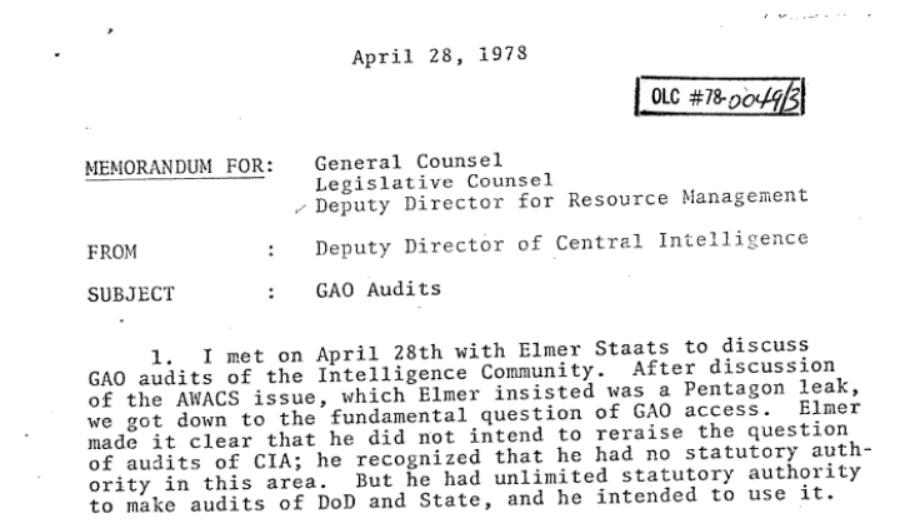 Coincidentally, it was while discussing this leak that CIA first proposed that GAO route all of its requests through the Congressional intelligence committees. The proposal was met with refusal from the GAO, which also asserted that the Congressional committees would also categorically refuse. CIA’s representative simply responded that this “was open to question.” In the intervening years, tensions increased between the GAO and the congressional committees, stoked in part by CIA and part by fabricated scandals such as the resulting accusation.

The accusation that would later center stage, which was apparently based on facts distorted and misinterpreted by a disgruntled former employee, was that there was a Soviet penetration of GAO and that there were moles inside the organization. The employee, identified in both media and Congressional reports as Ralph Sherer / Sharer, appears to have been largely ignored by the press until Jack Anderson took notice. Anderson’s narrative was based on information from Sharer and from Senator Orrin Hatch. It also appears to have distorted reality, presenting Sharer as a victim of something that was turning into a conspiracy against President Reagan.

This particular affair could be traced back to January 1979, when Vladimir Kvasov, a naval attache for military intelligence at the Soviet Embassy, walked into the GAO to request several reports. Some of these were classified and some were not, a fact which might have been alarming in and of itself. Additional warning bells were ringing over the fact that some of the reports hadn’t been printed, or even completed, at the time. This, very reasonably, led to a counterintelligence investigation in which the GAO would rely on the FBI.

The conclusion ultimately reached by the FBI and the GAO was that, contrary to some initial worries, there was no indication of a Soviet penetration of the GAO. While there were some areas in which GAO needed to update and improve its security, which GAO would begin to work on, there was no indication that anything had leaked from GAO, or that Kvasov had received anything he shouldn’t have. As the GAO would note, there was in fact a very simple and plausible explanation for how Kvasov got the information: it was unclassified.

At the time, it was standard practice for the GAO to provide members of Congress and the executive branch with unclassified lists of reports. According to the GAO, these lists included the names and report numbers of both unclassified and classified reports being prepared. It was from these lists, they assumed, that the Soviets had learned the information. It was, after all, unclassified and disseminated outside the GAO. A report was prepared, with the GAO and FBI agreeing that the Bureau would be in charge of the case as well as reporting to Congress. As a domestic counterintelligence issue with national security implications, this decision was completely proper. Nevertheless, Sharer would reject the conclusions and argue that the Soviets had penetrated the GAO.

According to Sharer and Anderson, it wasn’t through this unclassified and widely distributed list that the Soviets got the information, it was from “at least three ‘moles’ - employees recruited to turn over secret information - within the GAO.” Sharer, it seemed, was making a number of assumptions and confusing parallel but unrelated reports. What law enforcement sources would describe in multiple parts, Sharer saw as a unified whole where the puzzle pieces had to fit together. According to Sharer and Anderson’s developing narrative, an unwitting clerk had provided the classified information to Kvasov. According to the reports and the people involved in the case, that was a “companion check” that revealed weaknesses - not leaks. 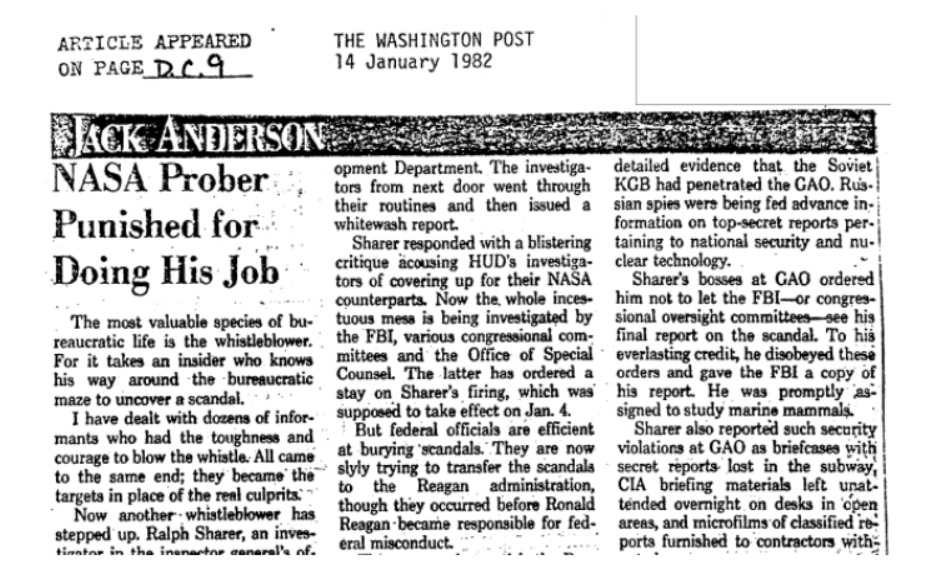 As criticisms against Sharer continued to come out from a variety of sources, Sharer and Anderson would frame them increasingly as part of a conspiracy against Sharer and, eventually, the Reagan administration itself. These accusations would distort or ignore facts relating to the former, and ignore the fact that Reagan needed no help in attracting scandals to his administration. According to Anderson, the strategy was “to stick the Reagan administration with the scandals until it feels politically threatened by them. Then the White House might be induced to defend, if not join in covering up, the improprieties.” 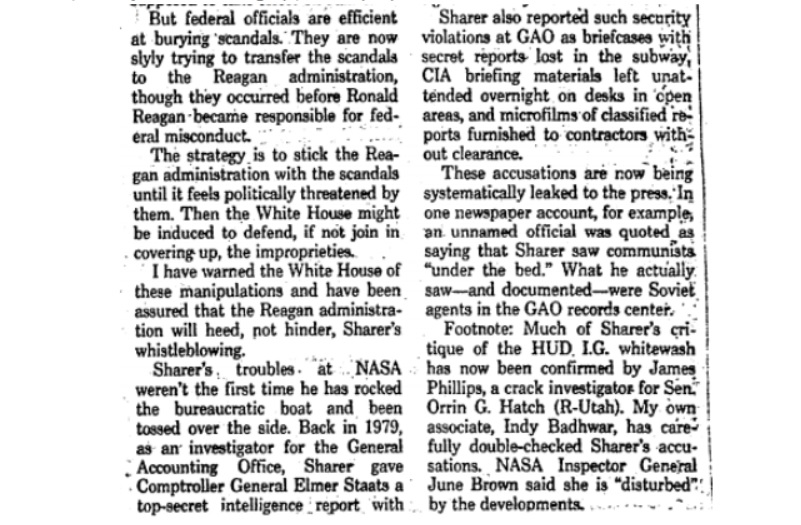 In a series of increasingly alarmist headlines, Anderson declares that Sharer was being “punished” by up to four agencies. The FBI, GAO, and Congress would all conclude that there was no validity to these claims. Moreover, some of Anderson’s statements are unquestionably false.

According to Anderson, an “unnamed official” accused Sharer of seeing communists “under the bed” in a newspaper account. Anderson made this accusation in a January 14, 1982 article. It appears that he was referring to a December 24, 1981 article by Charles Babcock, in which such a quote did appear. Far from relying on an unnamed official, the statement was clearly attributed to former Comptroller General Staats. The same article also stated that Sharer had been taken off the case at the GAO after he refused to give classified documents to Clario Pin, the senior administrator at GAO responsible for security. 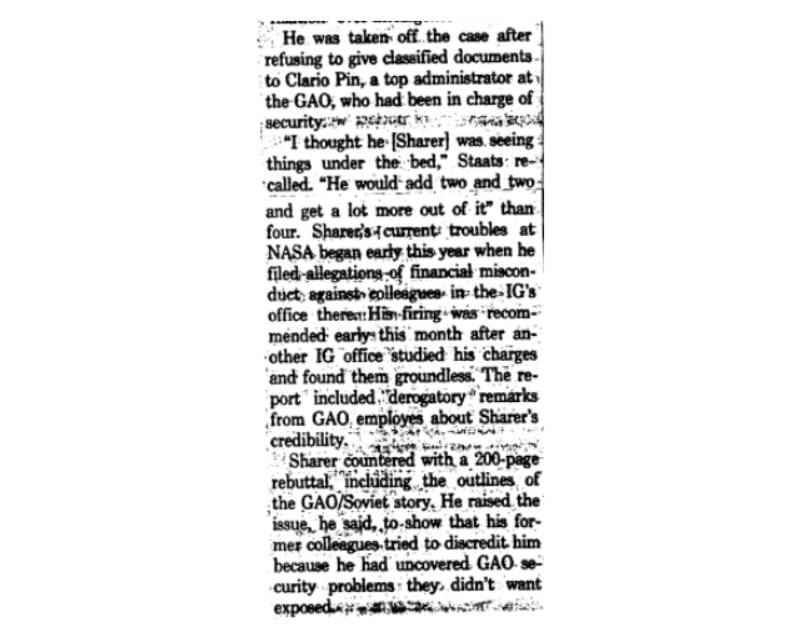 While Russian intelligence shouldn’t be underestimated, and it is always too likely that the well-practiced have managed to compromise any given U.S. government agency in some way, in this instance it does seem that Sharer was simply seeing ghosts. First, if the Soviets had moles in the GAO, it’s unlikely that they would have revealed it so blatantly. Moreover, the overt interest of the Soviets in these things, and requests through proper channels, was seen as a largely good thing. In some instances, the U.S. wanted them “to know as much as possible” since it would aid Soviet efforts to verify the U.S.’s compliance with the SALT agreements. 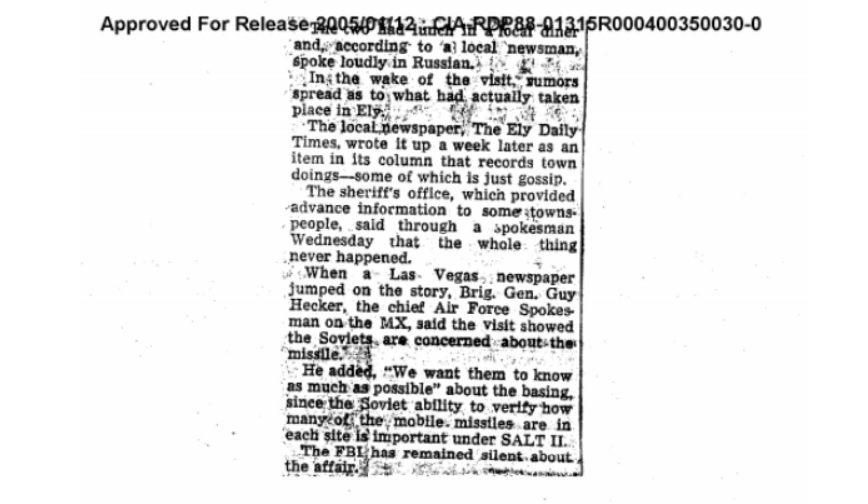 While Kvasov did work in military intelligence, it appears he was far from a master spy. Likely quite competent behind a desk, Kvasov was apparently worthless in the field. The absurdity of Kvasov as a competent spy is best described by the Washington Post, which managed to distill the situation to a single sentence.

While they were apparently dressed as cowboys, they loudly spoke Russian, told people they were from an Embassy in Washington D.C., and that their names were both Vladimir. Top notch tradecraft.

Kvasov was used for overt collection and was likely a talented analyst as a military attache - but he was no spy, and it’s unlikely that either the Cheka would have let him anywhere near a sensitive counterintelligence operation. While his accusations were ultimately ridiculous in light of the full investigation, Sharer was still taken seriously when he “urged the suspension of classified data to the watchdog agency.” According to the GAO, there was a very real danger of this happening.

Martin Fitzgerald, formerly of GAO, reported that if they hadn’t been able to fully document everything after the fact, “all of [GAO’s] access to Defense Department and State Department, matters involving security clearances could have been affected.” Fortunately for the GAO, they were able to provide the FBI with enough to reconstruct much of what had happened, and to clear GAO of an impropriety. As it would turn out, the closest the Soviets might have come to gaining access to the classified reports was through Sharer, the man complaining about it.

Of the reports Kvasov requested, 11 of them were still being drafted when he requested them. Several years later, when the FBI was re-investigating the matter, the reports had been completed. The FBI requested access, but GAO was unable to locate the records because they had been removed. The paper trail eventually led to Sharer, showing that he had taken the documents. 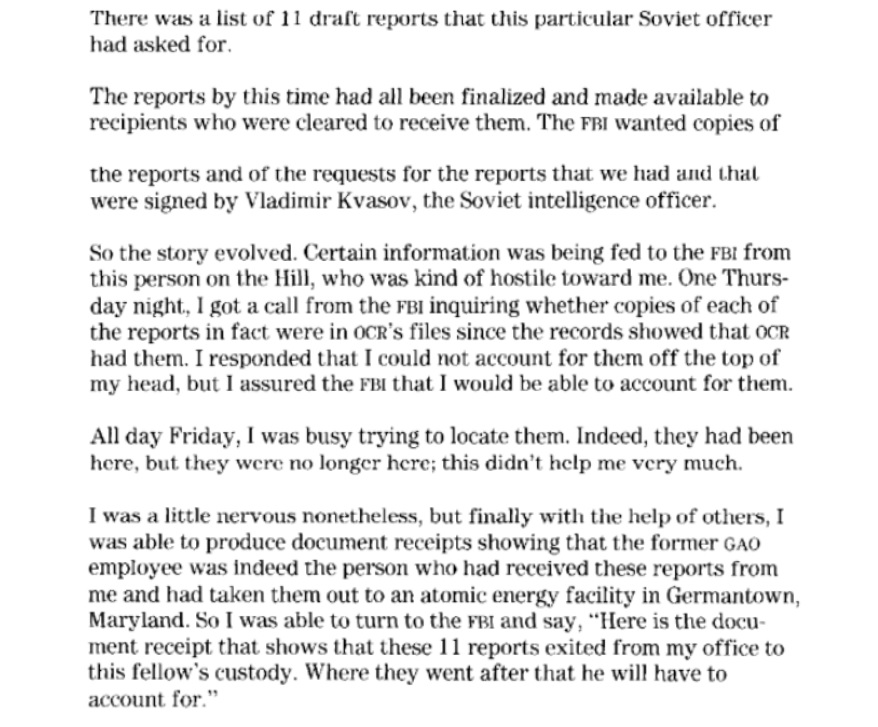 The documents were later accounted for when they were found in Sharer’s safe.

Considering Ralph Sharer / Sherer had alleged these reports were being supplied to the Soviets by a mole, it’s hard to take his claims seriously without concluding that he was the most likely mole. This, of course, makes no sense. Then again, little of Sharer’s claims did.

The FBI, GAO, and Senate Select Committee on Intelligence would all investigate the charges made by Sharer, and all concluded that they were lacking any factual basis. These conclusions were made after consulting with CIA and considering Sharer’s time at NASA, where he had faced similar issues, as well as the conclusions made by the Inspector General of an outside agency. 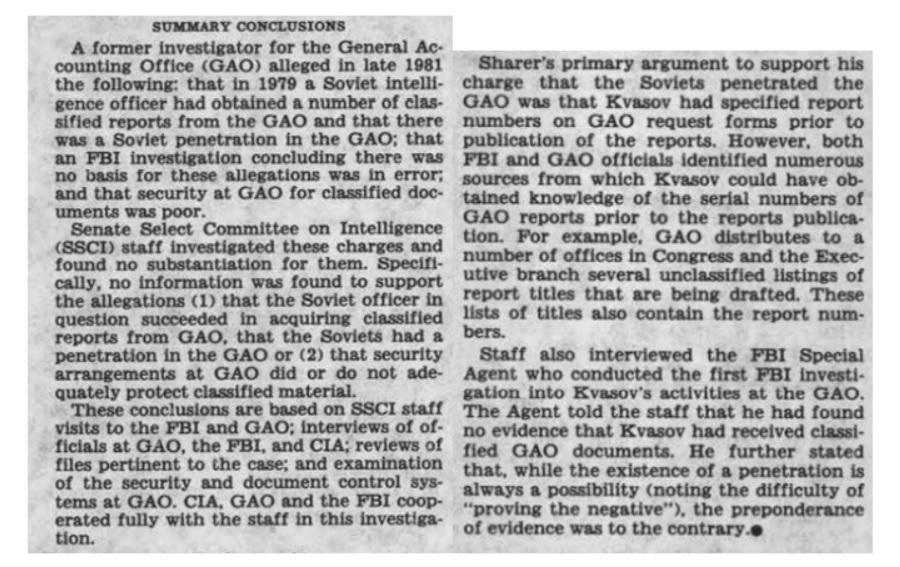 Nevertheless, the damage by Sharer had been done and the relationship between the intelligence committees and the GAO was more strained than ever. The divides deepened by the affair would soon be used to cut the GAO even further out of the loop when it came to CIA, who preferred to interface directly with the committees. The affair also diverted attention from the fact that the Soviets had already come perilously close to penetrating the Congressional intelligence committees through a former CIA officer.

A new FOIA request has been filed with the FBI to learn more about their investigations. In the meantime, you can read the GAO account of the affair below or the Congressional record of the matter here.