A set of Central Intelligence Agency documents originally marked CONFIDENTIAL and labeled “Initiatives to Deal with Leaks” outlines the recommendations of the CIA Director’s Security Committee for responding to the Intelligence Community’s ongoing leak problems. These recommendations included several notes about limiting the IC’s exposure to FOIA, arguing that FOIA’s “climate of transparency” encouraged leaks.

Dated January 10th, 1983 [the excerpt above above contains a typo corrected in the CIA copy, with the remaining dates correctly reflecting 1983], the memo for SECOM included recommendations for the DCI about dealing with leaks following a request from the DCI in late 1982. 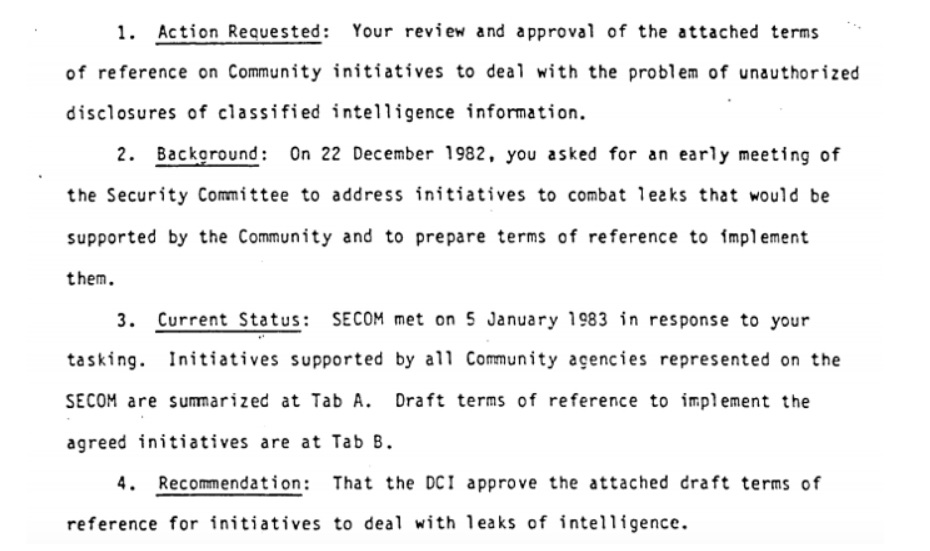 It appears that both the Director of the Intelligence Community Staff and the Deputy Director of Central Intelligence signed off on the recommendations, though the copies released by the Agency do not seem to indicate whether the CIA Director accepted or rejected the recommendations laid out in this particular document. However, history shows that the Agency had pursued (and would pursue again) many of the options laid out in the documents, including the FOIA exemption. One of those signing their concurrence with the recommendations noted that they were so uncontroversial that they were “preaching to the guys in church.” 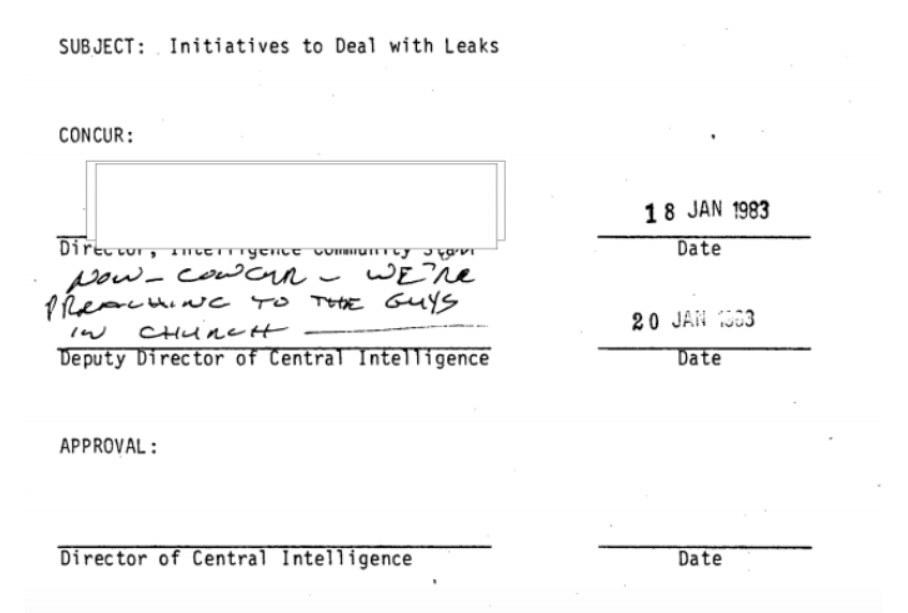 One of the initiatives proposed by SECOM was “to exempt intelligence data from FOIA.” The Agency had previously pursued legislation that would have this effect, noting that it had died with the previous Congress and not yet been reintroduced. The Agency noted that this would hamper major journalistic efforts and achievements, such as James Bamford’s The Puzzle Palace.

In the section on implementing the recommendations, the paper goes on to argue that exempting CIA and the IC from FOIA “would indirectly aid efforts against leaks.” In reality, this logic is rather backwards - by reducing and eliminating channels for lawful, responsible disclosures complete with often excessive redactions would dramatically increase both the public’s need for certain leaks and the media’s reliance on them. Sufficient legal transparency would eliminate the need for all but the most petty and political leaks.

According to the language used in this section, legal disclosures through FOIA threatened the “climate of broad recognition that intelligence information is to be kept within official channels only.” This ignores the simple fact that since its signing into law, FOIA has constituted an official and lawful channel with mechanisms in place to withhold information. The declaration from CIA’s leadership that FOIA contributed to leaks by encouraging a climate of transparency outside of official channels demonstrates either their fundamental misunderstanding of how FOIA worked, and/or a general hostility towards any version of transparency that they didn’t maintain total control of.

Nevertheless, the Agency was sincere in these beliefs. To the Agency’s leadership, “official channels” was not defined by federal legislation, but the Agency itself and the National Security Council. The Agency truly believed that it should only be subject to external transparency when it decided it was appropriate, anything less was considered a threat to the Agency’s control and security. FOIA, however, is a tool of lawful transparency - nothing more, and nothing less.

You can read a slightly annotated copy of the recommendations below, or see a slightly different copy here.