Thanks to your support, we’ve raised the cost for filing fees and the lawsuit will go forward - any amount raised in addition will be to defray future costs.

The Church Committee investigated and exposed some of the largest and most significant scandals in American history, to the point that both the National Security Council and the White House felt the investigations threatened the very existence of the Central Intelligence Agency. As the Kissinger archives have shown, there are still new things to discover about the investigations.

Last October, the Federal Bureau of Investigation received a FOIA request for their file on the Church Committee, which was captioned SENSTUDY 75. A month and a half later, they handed over 123 pages of preprocessed files, portions of which MuckRock wrote about, while others had already been covered thanks to the CIA’s archives.

After an appeal over the FBI’s failure to search for new records, the Department of Justice instructed them to perform a new search - resulting in their finding a 18,615-page file, about three times as large as the Church Committee’s combined 5,585 pages of hearings and reports. Based on the size of the file, the Bureau is asking for a commitment to pay $565 in duplication fees. 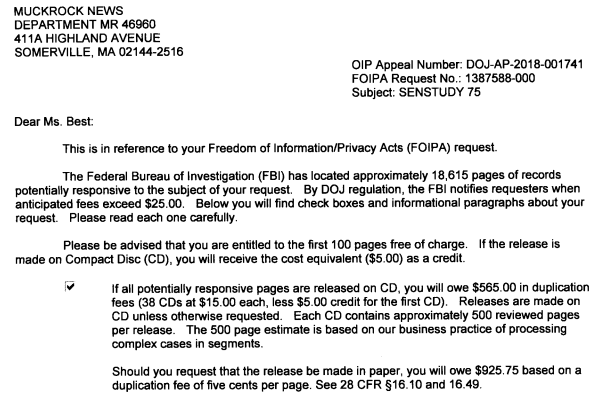 Although a fee waiver was requested, the Bureau denied it, writing that the “disclosure of the requested records would not be meaningfully informative about government operations or activities.” This is despite the fact that the request is for government records about a government investigation into an agency’s operations and activities.

Mark Zaid of Mark S. Zaid, PC, has agreed to take the case on, arguing not only that there is a strong public benefit to the release of these documents but also fighting to ensure that the FBI fulfills its obligations in releasing as much of the information as it is legally required to in a timely manner.

But while Zaid has agreed to take on the case pro bono, we still need to pay filing fees of $425. In addition, this kind of litigation can easily drag on for years. Money raised over and above cost of filing fees will help his defray the costs his firm incurs through the process.

If you ever wanted to help sue the FBI or wring more information from the Church Committee investigations, please support this effort.