A pair of declassified memos from January 4, 1975 reveal just how contentious things were in the lead-up to the Rockefeller Commission and the Church Committee, with recent exposés having rocked the American public’s faith in the government, already strained by the still-fresh memories of Watergate, and undermined CIA’s legitimacy.

Early in the afternoon on January 4th, President Gerald Ford sat down with his senior advisors and former CIA Director Richard Helms to discuss the allegations of CIA’s domestic activities. 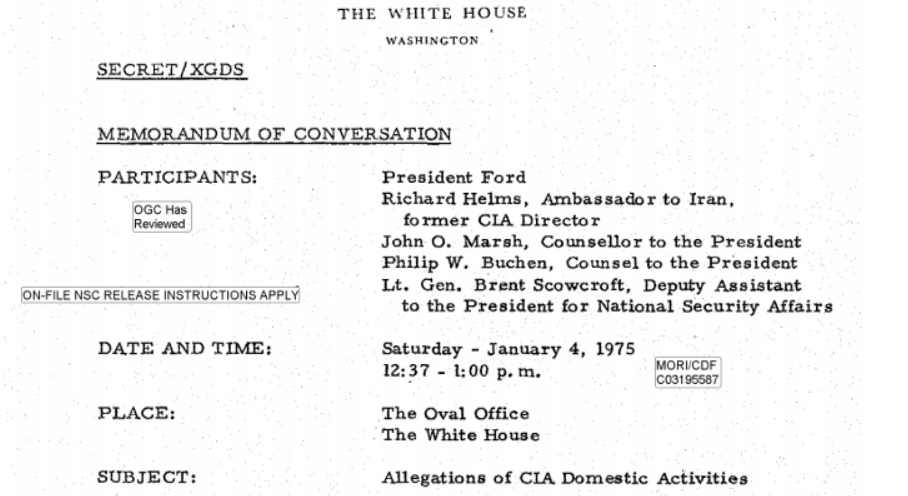 The President began the meeting cordially enough. Ford told Helms that he admired him and his work, and saw the Agency as necessary. “It has to exist and perform its functions.” However, a Blue Ribbon Panel (which would become the Rockefeller Commission) was going to look into the Agency’s domestic activities. Helms immediately replied with a strategy that would be suggested again by Laurence Silberman in a meeting with Henry Kissinger the following month: why not look at the FBI?

Ford assured Helms that he would consider it. He hoped that the commission would stay within its charter, saying “it would be tragic if it went beyond it, because the CIA needs to remain a strong and viable agency.” The President went on to assure the former CIA Director that he was ready to rubber stamp the Agency’s past actions, telling him that “unless it’s proved otherwise” he would “automatically assume” that what Helms and the Agency did was right.

Helms, however, was far from reassured by the President. As he saw it, the core of the problem was Congressional oversight. While Congress was overtly in favor of it, Helms noted that in reality “no Congress wants to join hands with the Bay of Pigs, et cetera; it’s bad politics. The CIA is the President’s creature.” What truly concerned him, however, was the behavior of current CIA Director William Colby. Helms was aware that allegations were being made and information was beginning to come out. If needed, Helms promised to defend himself.

At the same time, Helms reiterated a sentiment offered in a previous meeting - that not even the CIA Director knew everything that went on in the Agency. However, he did know things. He did, however, know enough to say that he would participate “if the dead cats come out.”

“Throwing a dead cat on the table” is a political strategy to divert attention from something that is damaging you by giving people something more dramatic or shocking to talk about. This threat was quickly tempered by a promise that he was loyal to Ford and that he didn’t intend to “foul the nest” if he could avoid it.

The President reassured Helms that he had total faith in him and in his integrity. He wanted to protect the Agency and its functions, and keep things from turning into a “witch hunt” but was unsure if he could control it.

The meeting did not appear to reassure the President. About five hours later, he met with the Vice President, Dr. Kissinger, Brent Scowcroft and his other senior advisors. 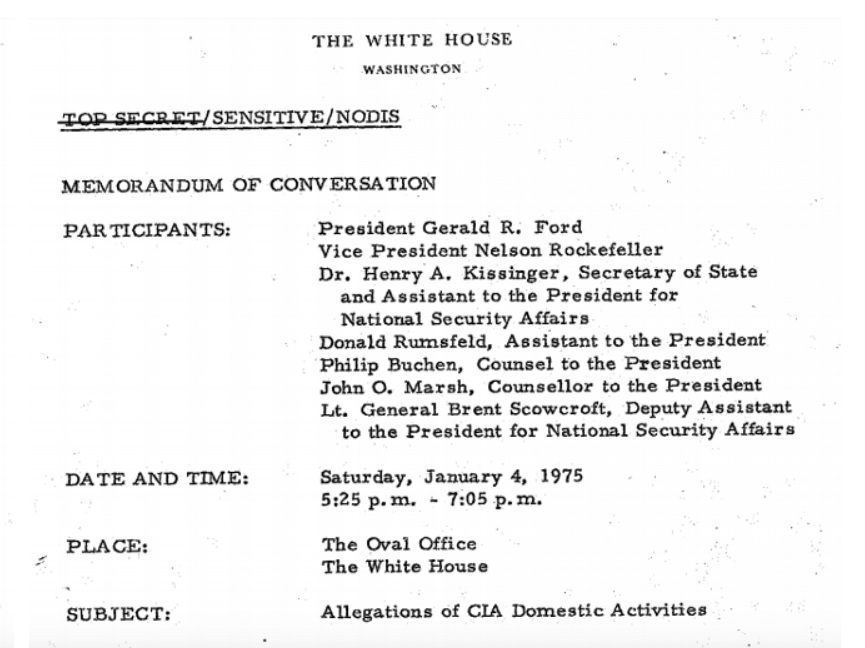 The President briefly summarized the situation and the difficulties that they had faced since the publication of Seymour Hersh’s expose in the New York Times. He then confirmed that, as Helms feared, CIA Director Colby had gone to the Justice Department with allegations of CIA wrongdoing. Notably, Colby did this without the President’s approval or even knowledge.

When Kissinger described the “horrors book,” now known as the CIA’s Family Jewels, the President made it clear just how dire the situation seemed to them. They were “concerned that the CIA would be destroyed” by the information. The Vice President’s scenario in which they became the laughing stock of the world must have seemed only slightly better to those assembled.

The President reiterated his desire to have the situation initially handled by a Blue RIbbon Panel, which he proceeded to ask Vice President Rockefeller to be the Chairman of, giving it it’s common name - the Rockefeller Commission. Kissinger wasn’t worried about the Panel itself, noting that if they could “confine the Panel to the domestic issues” they would be okay. The worry was if the Attorney General investigation started a series of leaks.

As the President noted, however, the process seemed to have already begun. The CIA Director had already received a letter from Congress expressing interest in investigating “covert activities related to foreign issues.” Colby had already told several of those assembled, along with additional Congressmen. To the President and the others, Colby must have seemed determined to see things leak. The President noted that Helms thought “Colby shafted him,” and referenced Helms’ threat to throw “dead cats.” Helms’ perception may not have been entirely wrong, as Colby had raised the issue of a possible perjury by Helms with the Department of Justice. The Vice President noted that this raised “real questions on his judgment.” The President responded that the issue had been discussed and debated, and they had decided that he couldn’t be moved at that time.

As the discussion turned back to the Rockefeller Commission, Rumsfeld repeated an earlier suggestion of appointing “a black” to the Commission.

However, the primary purpose of the Commission needed to remain minimizing, deflecting and directing the various pending Congressional investigations. At the time, there eight separate hearings in the works. This concern led Kissinger to note that Colby had to “brought under control” before everything was “all over town.”

According to Kissinger, Colby simply couldn’t be relied on and would claim his testimony was being limited.

As a result, it would be necessary to begin the Rockefeller Commission’s work as soon as possible so as to limit and delay the number of investigations. The concern over Colby, however, remained. His time as CIA Director was limited, and while the President was unable to move Colby in January 1975, Henry Kissinger convinced the President to begin preparing to replace him. Within the year, it was officially decided that he would be replaced by George H.W. Bush.

You can see President’s and CIA Directors discuss throwing dead cats as a metaphor for weaponized transparency in the memos below.

Image via US Presidential History