In testimony before the Church Committee, the Federal Bureau of Investigation’s Deputy Director acknowledged that the Bureau at one point made up as much as one-fifth of the Klu Klux Klan’s total membership - but were still powerless to curtail the KKK’s violence. His testimony also acknowledged police participation in said violence, and that the Bureau had three times as many “ghetto informants” as they did those targeting white supremacist domestic terrorists. 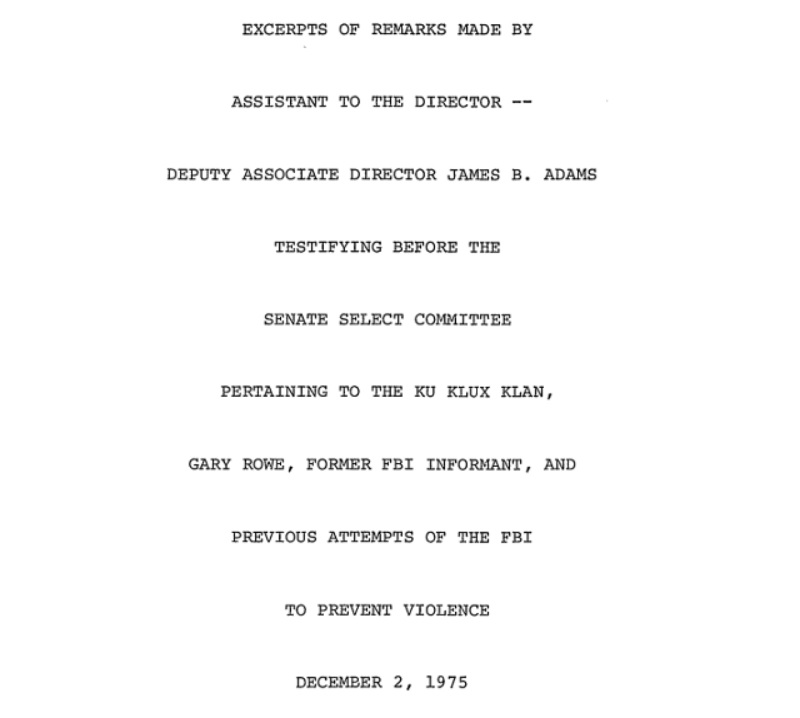 In response to a FOIA request filed several months ago for the SENSTUDY 75 file, pertaining to the Church Committee, the FBI recently released a preprocessed file (apparently unable to provide even preprocessed documents within the time period required by the law) that includes excerpts of testimony from Deputy Associate Director James Adams addressing the Bureau’s involvement with, and failure to curtail, the KKK. Before finishing his first sentence in the excerpted testimony, Adams had offered somewhat misleading information in stating that the COINTELPRO efforts had been discontinued in 1971.

In actuality, all that was discontinued in 1971 was the centralized program. According to the memo commonly cited as discontinuing the program “for security reasons,” COINTELPRO efforts would “be considered on a highly selective individual basis with tight procedures to insure absolute security.”

The Church Committee would note that the efforts had continued in several known instances, and that the effect of ending the centralized program was simply that it was impossible to understand the full scope of those efforts without manually searching over 500,000 case files.

After providing this technically-true-but-entirely-misleading statement, Adams admitted to the Committee that the law had been “ineffective” against the Klan. He also argued that local law enforcement should be the primary tool used against groups like the Klan.

This argument fell somewhat flat in light of the following paragraph in Adams’ testimony, where he admitted that local law enforcement officers had been “participating in Klan violence.” Stating that “the FBI and the Federal Government were almost powerless to act,” he nonetheless defended the Bureau’s actions against the testimony of one of their informants, Gary Thomas Rowe, by pointing out that they had provided his information to local police departments.

This defense also fell somewhat flat immediately following his admission that some of those police departments had members “participating in Klan violence.” In light of that testimony, it’s hardly surprising that Adams’ also admitted that the information “was not being acted upon.”

Adams then re-emphasized this by restating it, seeming to validate some of the things Rowe had said shortly after impugning the depth of Rowe’s knowledge and ability to speak on the subject.

Adams’ testimony bemoaned the legal obstacles preventing the Bureau from acting as they wished they could, an ironic complaint given the illegal behaviors that COINTELPRO (the program under discussion) is infamous for. Adams also noted that the groups being monitored had greater numbers than ever before, which made it difficult for the Bureau to fully monitor them and counter their efforts, as well as increased the danger of these groups. This latter point might have been more impactful if Adams hadn’t also admitted that approximately 2,000 members of the KKK were working for the FBI.

Adams disputed the number of FBI employed KKK members by stating that the 2,000 informants included all “racial matters,” and that the FBI only accounted for “around 6%” of the KKK’s membership.

Adams proceeded to contradict his earlier statement that the FBI had been powerless against the KKK by claiming credit for a decrease in violence from the group by inducing paranoia in them. In virtually the same breath, he reaffirmed that “the Sheriff[s] and other law enforcement officers” had been “in on” the violence and murders of civil rights workers, while also repeating the 20% figure he had just disputed.

It was then brought up with Adams that there was “considerable evidence” that “no attempt was made to prevent crime when [the FBI] had information that it was going to occur.”

Adams defended the Bureau by saying that they had passed the information on to the local police department. In response, it was pointed out that the FBI knew the department “was an accomplice to the crime.” Adams, having previously admitted that this was the case, simply responded they did “not necessarily knew [sic]” despite having been told this by their informants. As a result, the questioner noted, they “weren’t doing a whole lot to prevent that incident by telling the people who were already a part of it.”

Adams’ denied that the Bureau had encouraged informants like Rowe to participate in violence, only to have his statement contradicted by both Rowe and the Agent in Charge.

The testimony excerpted in the file ends with Adams’ denying that the Bureau became involved in anyone’s sex life and that such a thing would not be “of any value whatsoever.”

Adams’ blanket denial is contradicted by the FBI’s own memos on COINTELPRO, such as one discussing the possibility of informing the public that an actress was pregnant to “cause her embarrassment and tarnish her image.” The memo notes that this wasn’t part of the COINTELPRO effort against white supremacist groups such as the KKK, but against a white woman for supporting an enemy of the KKK - the Black Panther Party.

While Adams attempted to deny many of the accusations made against the Bureau and citations of the Bureau’s failure, he was just as often forced to admit them either just prior to or just after those denials. Regardless of whether the Bureau had made up 6% or 20% of the KKK’s members, the Special Agent in Charge instructed their informants to allow the acts to happen. When the Bureau did take action, it was to pass the information onto the local police departments - who in at least some instances were known to the Bureau to be among the perpetrators. The Bureau justified its behavior by citing legal restrictions and the sudden growth of the KKK, which the Bureau itself had been responsible for approximately 70% of. Adams’ testimony also misleadingly claimed that the Bureau had discontinued COINTELPRO efforts, a fact which the Church Committee was able to contradict.

However, what has been recently discontinued is funding to counter white supremacist groups like the KKK with the Trump administration “turning a blind eye” to white supremacists groups in what they have welcomed as “a signal of favor” to them. If the FBI was, in their own words, powerless against the KKK even while making up a large percentage of its membership through informants and agent provocateurs, it’s hard to imagine how effective the Bureau’s ongoing individual investigations against white supremacists will prove any more effective.

Despite relatively recent reports that the FBI has 1,000 ongoing investigations against white supremacists, this number actually includes all types of “domestic terrorists” - a label that the FBI has applied to anyone from protesters who vandalize cows made of butter to people who had pro-peace bumper stickers or were labeled suspected terrorists simply because of the people they knew.

You can read the initial release below, or on the request page. The second half of the file consists of the Department of Justice’s report on their decision not to prosecute anyone for the illegal mail opening programs. That report is discussed here.