A request for documents related to “ecoterrorism” in the possession of the FBI’s Countering Violent Extremism Office produced an intelligence bulletin warning that “animal rights extremist” activity may be on the rise, as well as a report from researchers at the University of Maryland on recent trends in terrorism.

The former is a portal that connects various law enforcement and intelligence agencies, while the DSAC and Infragard are partnerships between private industry and the FBI. The “confidence level” of the bulletin is redacted, so it’s impossible to know just how sure the FBI is that the intelligence is accurate.

What the document does offer is a further glimpse into the extent to which the FBI considers economic sabotage and direct action on behalf of animals to be “terrorism.” The agency also worries that “rhetoric in claims of responsibility for such criminal acts supports and encourages future actions,” pointing to communiqués boasting about the actions posted on websites such as The Final Nail, Animal Liberation Front Online, and BITE BACK Magazine.

First, the bulletin mentions a series of “more than 30 animal releases and acts of vandalism in California, Idaho, Illinois, Iowa, Michigan, Minnesota, Montana, Oregon, and Wisconsin” between May and September of 2013. Despite the two-and-a-half dozen occurrences, the FBI doesn’t necessarily think the situation warrants an all-out panic:

Although they’re still deserving of special placement in a counterterrorism bulletin, apparently.

After that, the authors of the document also couldn’t help but assert that maybe “captivity” is just a matter of perception.

Next, a section of the bulletin referring to recent releases of mink from fur farms in Idaho, Illinois, and Iowa, containing a paragraph or two that are entirely redacted.

Then we learn the FBI is seriously concerned about animal rights activists sabotaging – of all things – pheasant hunting season by releasing game birds.

The final item of such high importance as to make its way into a counterterrorism bulletin circulated throughout the intelligence and law enforcement community,is vandalism of property by animal rights “extremists,” including gluing the locks at butcher shops in Portland, Oregon, and spray painting the doors of a restaurant in California with phrases like “FREE THE ANIMALS.” 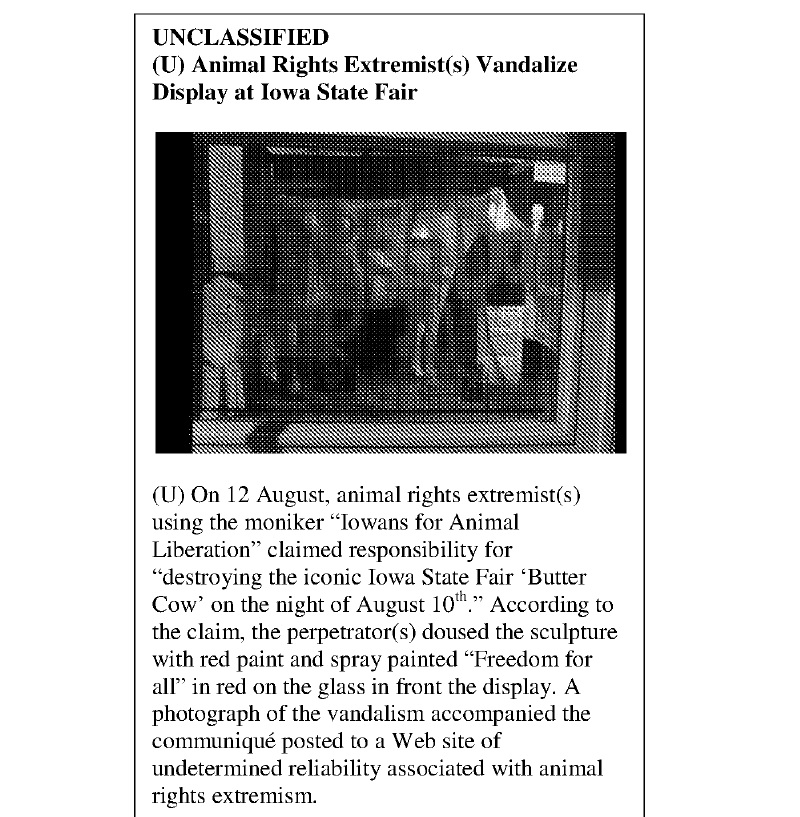 Nothing is safe from the ecoterrorists – not even “art.”

The “Outlook and Implications” section is nearly fully redacted, leaving us to wonder just how (in)accurate the FBI has been about its predictions of animal rights “extremist” activity in the 27 months since the bulletin was created. 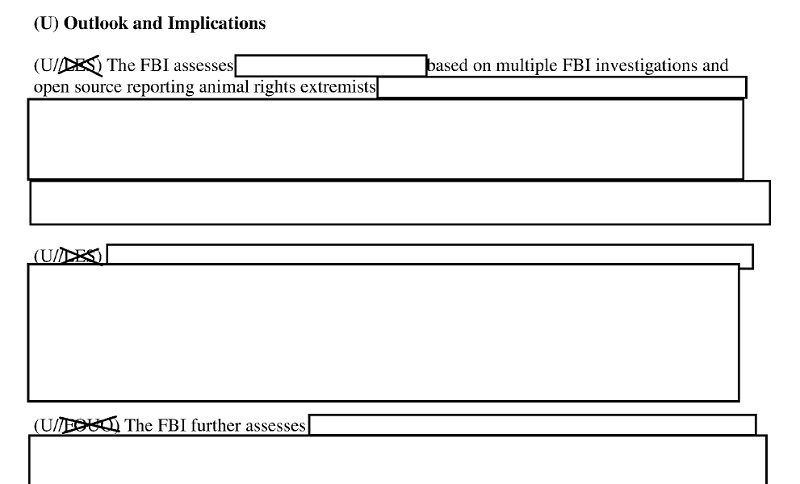 Accompanying the bulletin is a report created by a professor at the University of Maryland with two researchers from START – the National Consortium for the Study of Terrorism and Responses to Terrorism – on “Terrorist Attacks in the U.S. Between 1970 and 2012: Data From the Global Terrorism Database (GTD).” The research was supported by a Department of Homeland Security grant through the Resilient Systems Division of the Science and Technology Directorate. 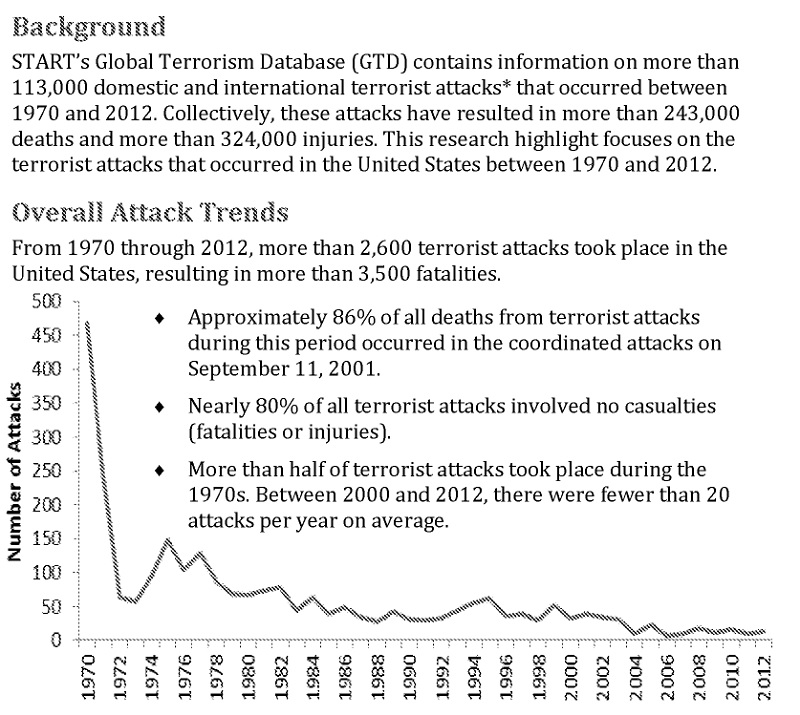 If you’re aware of the rather extensive history of law enforcement conflating activism in the name of animals or the environment with “terrorism,” you won’t be surprised that, after providing some basic statistics about recent trends, the report goes on to list the Earth Liberation Front (ELF) and Animal Liberation Front (ALF) as the two most prolific perpetrators of terrorist attacks between 2000 and 2012.

What makes this gold and silver placement in the Terrorism Olympics all the more interesting is the definition of terrorism used by the researchers. According to them, “[t]errorism is defined as the threatened or actual use of illegal force and violence by a non-state actor to obtain a political, economic, religious, or social goal through fear, coercion or intimidation [emphasis added].”

This is a comprehensive definition that most of us probably agree with. The only problem is that – according to MIT doctoral candidate Ryan Shapiro, whose dissertation focuses on animal rights activism, national security, and law enforcement – nobody in the movement has actually caused any substantial physical harm to anyone, ever.

It may be a little misleading, then, to place these nonviolent, direct action groups on top of a list that includes Al-Qaeda.

A bonus: the FBI also provided an entire copy of anti-abortion and anti-homosexual extremist Daniel Rudolph’s book Between the Lines of Drift: Memoirs of a Militant. He’s probably not very happy about it – though every page of the book was withheld except for the cover.

What this book has to do with “ecoterrorism,” however, remains a mystery.

The intelligence bulletin has been embedded below, and the rest can be found on the request page.