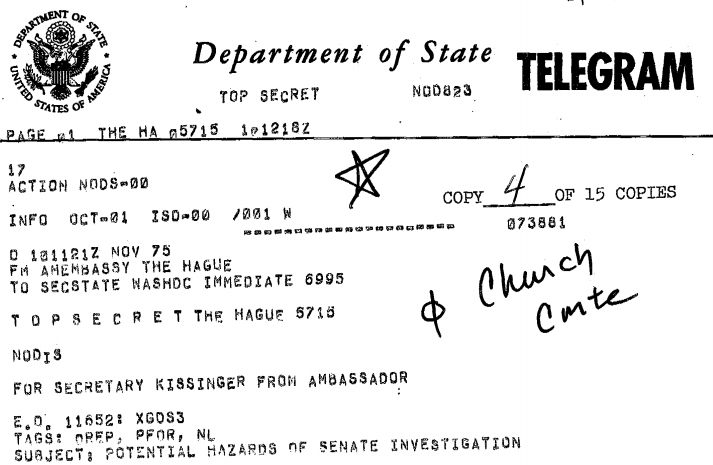 According to the cable authored by Ambassador Kingdon Gould:

Though the memo doesn’t specify what the allegations are, they likely relate to one of Lockheed’s bribery scandals. According to a Washington Post article from 1977, the Lockheed scandals were “first revealed in testimony before the Senate subcommittee on multinational corporations in the summer of 1975.” The same article explains that “Prince Bernhard was stripped of his jobs in the armed forces and forced to relinquish business connections after a Dutch inquiry concluded he had sought payments from Lockheed.” (Bernhard, coincidentally, was the co-founder for the infamous Bilderberg Group.) According to an article preserved in CIA’s archives, the Agency was aware not only aware of the payoffs, but “Lockheed representatives participated in briefings with the CIA in various embassies.”

While the Netherlands’ NATO membership remained intact, the revelations that were made clearly made an impact on the political order of the Netherlands, as well as other nations. MuckRock has filed FOIA requests to learn more about this episode of history. In the meantime, you can see the original declassified cable below.