The annual Bilderberg Conference is shrouded in nearly as much mystery as CIA itself, with a number of conspiracy theories that seeing these meetings of the elite as where the strings of the world are pulled. To get an idea of how intelligence agencies view the Bilderberg meetings, I reviewed the references in the CREST archive. While there weren’t many references, they were enlightening. 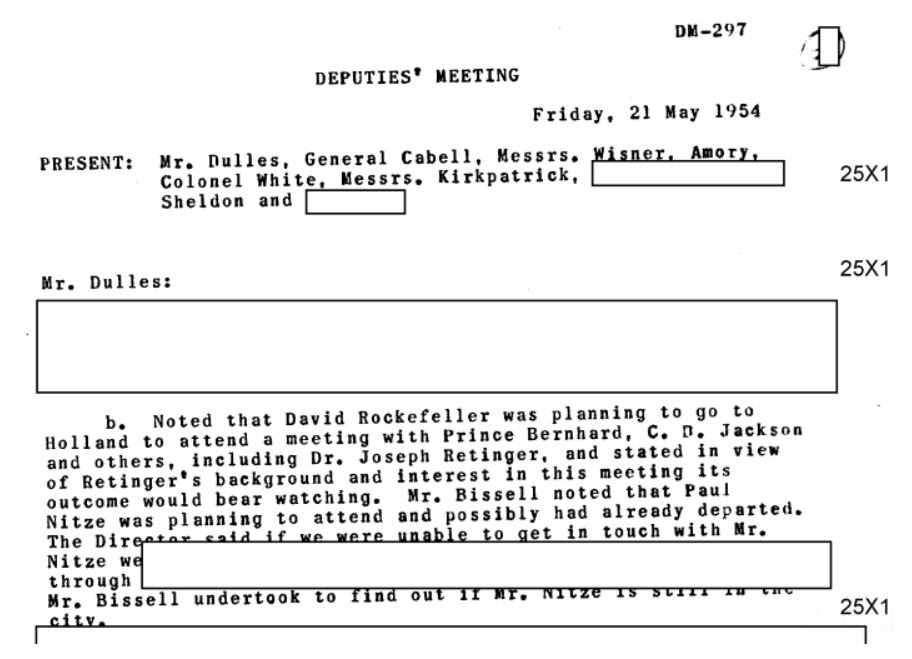 The reference to Paul Nitze’s attendance is notable, as Nitze would be later associated with the Agency when he was brought in as part of “Team B” to consult on some of CIA’s National Intelligence Estimates (NIEs). This reference to Nitze had curious timing, as was his coordination with Richard Bissell (who would go on to become a senior CIA officer). Until 1953, Paul Nitze had been the Director of Policy Planning for the State Department. In 1963, he would reenter government service as the Secretary of the Navy. At this point, however, Mr. Nitze had no overtly acknowledged relationship to the Agency. A bit of digging, however, showed that at the time, he was employed by and under contract with the Agency.

When the Agency was asked to comment about and provide context for this relationship, a spokesman for CIA declined, except to say that if I was “looking for info on the supposed contract, [I’d] need to file the FOIA request.” As it turned out, I already had. However, there was nothing “supposed” about the contract - CIA’s own declassified documentation shows a signed affidavit from Paul Nitze regarding his appointment to CIA, which required him to swear he wasn’t a fascist or communist, from the same day his contract began (January 21, 1954). 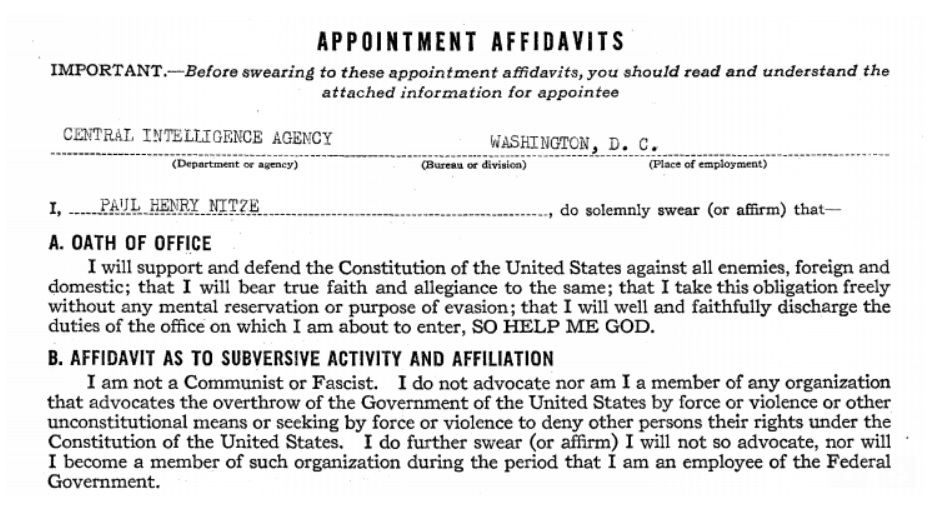 A series of letters from the Agency’s Director of Personnel and Deputy Assistant for Personnel also spell out the dates of his contract, while also noting that the original year and half long contract was extending for an additional year. In addition to briefly describing his contract with CIA, both of the letters from CIA explicitly refer to him as as contractor. 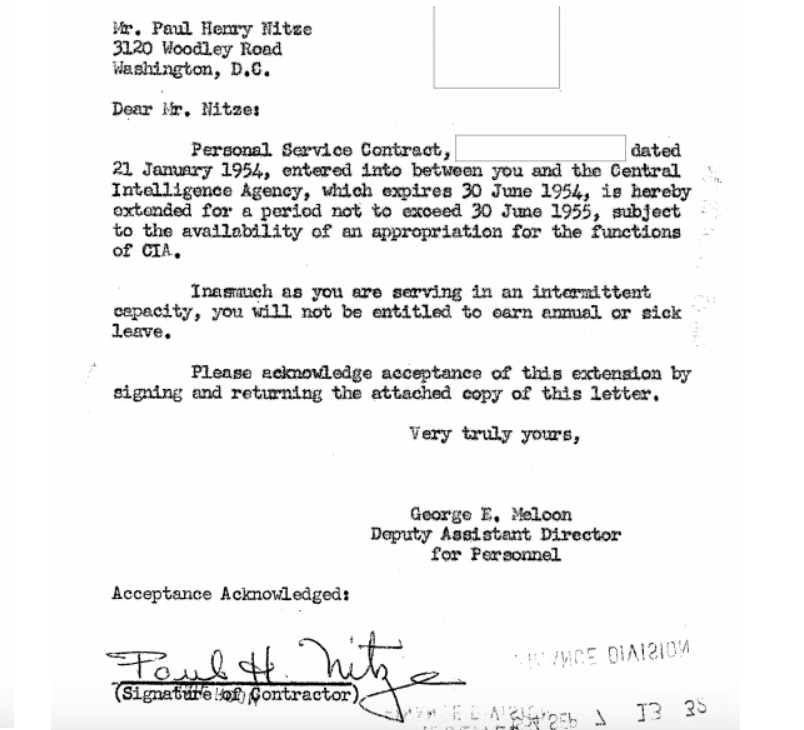 It’s currently unknown how much Nitze reported back about the Bilderberg conference, or in what capacity his contract had him serving the Agency.

The CIA Director’s interest in the Bilderberg Group wasn’t a one-time affair. Four years later, he was still keenly interested and being kept apprised of the Bildegroup Group’s activities. In May of 1958, he was written by one of the Joseph Johnson from the Carnegie Endowment for International Peace - and the Bilderberg Steering Committee. Johnson wrote to Dulles to send him a copy of the summary of a discussion held by the Bilderberg Steering Committee, along with a brief note of where the summary fell short. 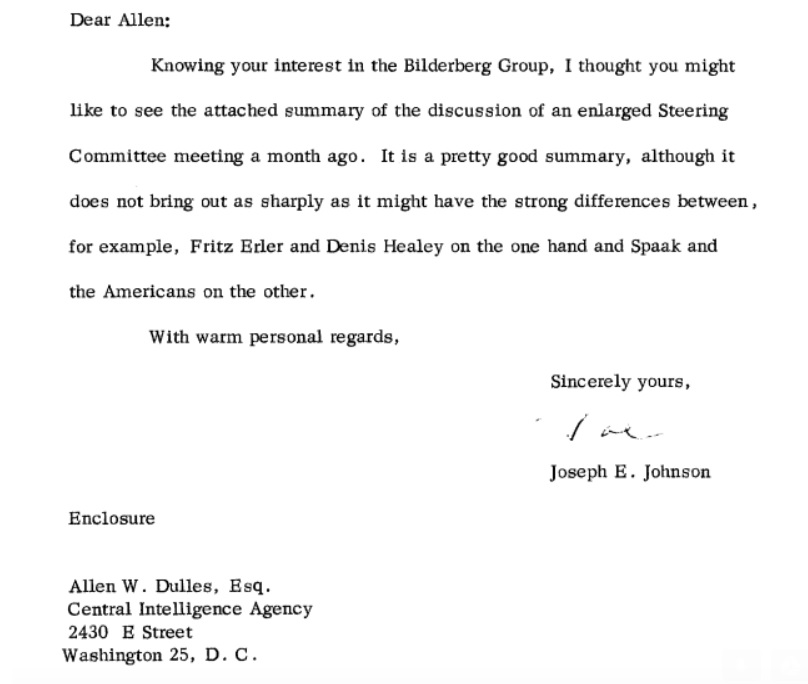 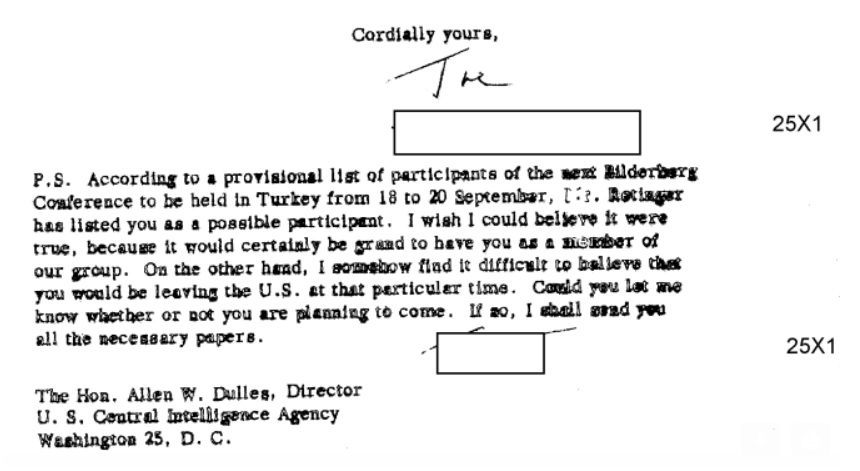 Four days later, Director Dulles wrote back to Johnson to confirm the other’s suspicions: the Director’s schedule would prevent him from being able to leave the country for the meeting. However, the Director noted that he hoped to be able to attend someday. 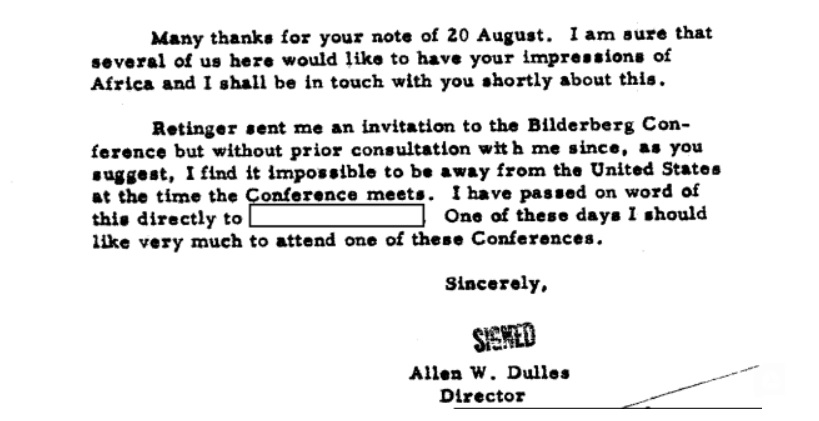 The Bilderberg Group doesn’t appear in CIA’s declassified files again until 1975, when a formerly SECRET compilation of CIA Staff Notes mentions the conference in an Unclassified paragraph. The paragraph notes that the conference is to be held in Turkey in April, will discuss inflation and that Prime Minister Thatcher had been invited. The document notes that the Bilderberg format would provide “main speakers” with ten minutes, while others would be limited to only five minutes in which to speak. 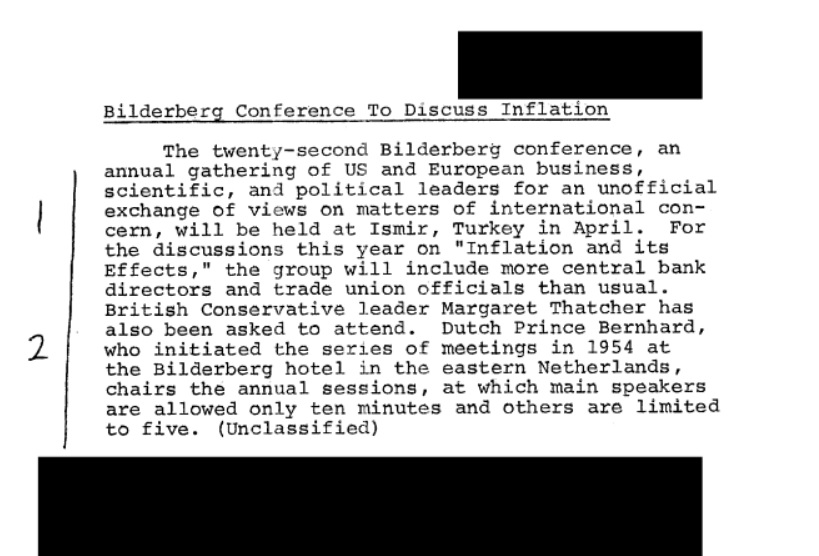 Seven years later, the Bilderberg Group was mentioned in conjunction with Ronald Reagan’s “Project Truth” initiative, which combined the efforts of the State Department, the International Communication Agency, the National Security Council and CIA. 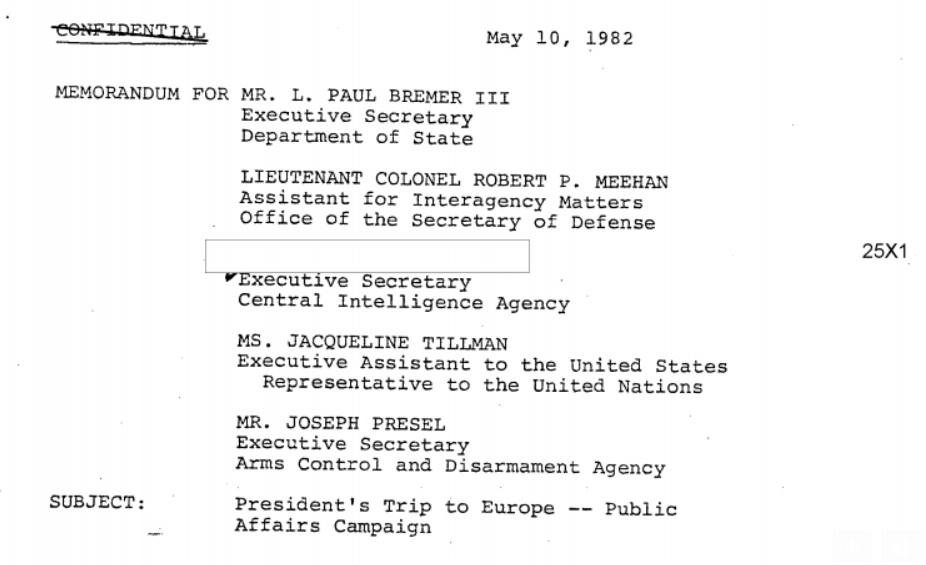 The memo outlined a series of proposed efforts to support the President’s upcoming trip to Europe. Included in those suggestions was one for “appearances at overseas events; e.g. the May 13-16 Bilderberg Meeting in Normway.”

The final declassified reference comes from a 1984 memo distributed to people inside CIA noted that the Director (presumably for the US Arms Control and Disarmament Agency, which produced the memo) would be giving a speech at the Asilomar Conference in California, and that the speech would draw “on the previously distributed Bilderberg speech and other materials.” A copy of the speech for the Asilomar Conference was included in the memo, but it’s unclear which portions drew from the Bilderberg speech. 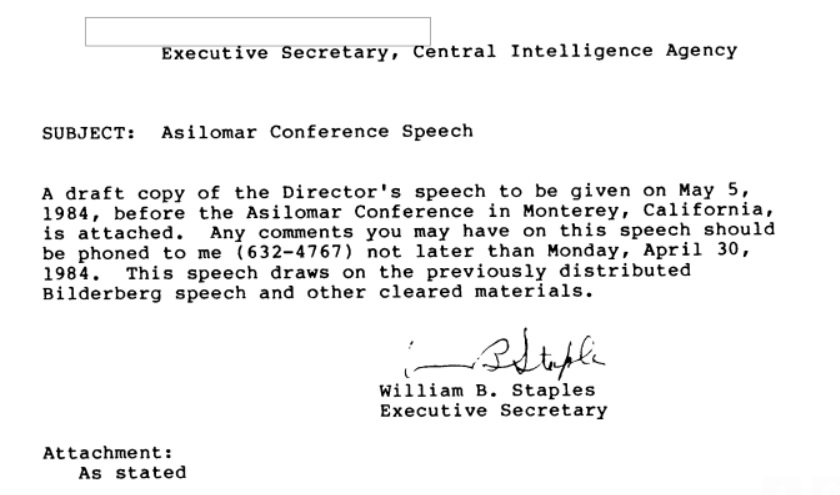 While these documents merely hint at the Agency’s interest in, and possible involvement with, the Bilderberg Group, they remain one of the clearest insights yet into the interactions between the two. You can read one of the cited memos below.