In the early days of MKULTRA, while the Central Intelligence Agency scrambled to defend against the alleged “brainwashing” programs of foreign countries, and to create its own, Agency staff responsible for the program responded to a report describing reported Soviet brainwashing efforts. In a letter formerly classified SECRET, CIA staff dismissed the Soviet techniques as “police tactics which would not be condoned in a democratic country.” The tactics described in the report not only mimic tactics which have been used in Guantanamo and in CIA black sites, proved to be a source of inspiration for some post-9/11 interrogation programs.

The declassified letter proposes requesting a clarification from the CIA Director regarding the recent report, which had been edited without consulting the Technical Services Staff. According to the letter, there was concern about “overdramatized statements.” While the techniques discussed in the report were ‘nefarious’ and ‘inhumane,’ the letter’s author cautioned that they were not to be exaggerated.

The letter noted that there was nothing “mysterious or scientific” about the report’s methods, which could be performed by any ordinary police force. However, they “would not be condoned in a democratic country.” Decades later, the US had not only implemented these techniques, some of them had been taken directly from the enemy CIA’s staff was warning about.

The ‘nefarious’ techniques discussed in the report included the use of what are now referred to as stress positions, which CIA described as “a form of physical torture.” 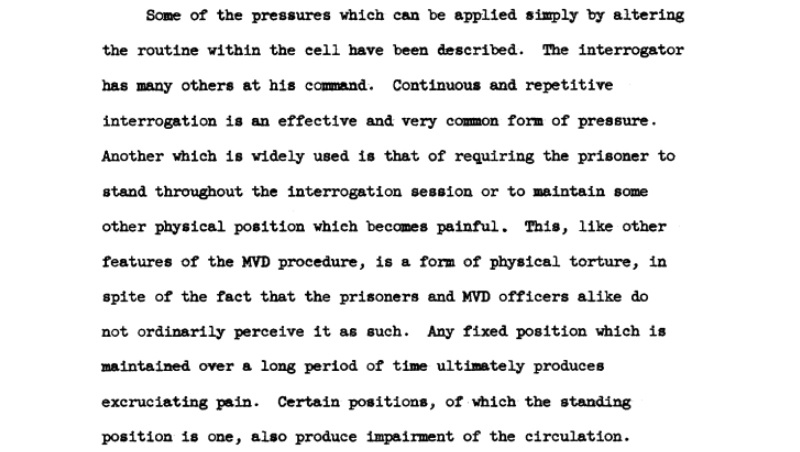 The stress positions included the benign sounding forced prolonged standing, the effects of which are described in excruciating detail. According to the report, an edema is produced, resulting in the ankles feet, and even thighs swelling to twice their normal size. “The skin becomes tense and intensely painful. Large blisters develop … Eventually there is a renal shutdown. Urea and other metabolites accumulate in the blood.” The ultimate result would be “a delirious state, characterized by disorientation, fear, delusions and visual hallucinations,” which the report described as “psychosis.” 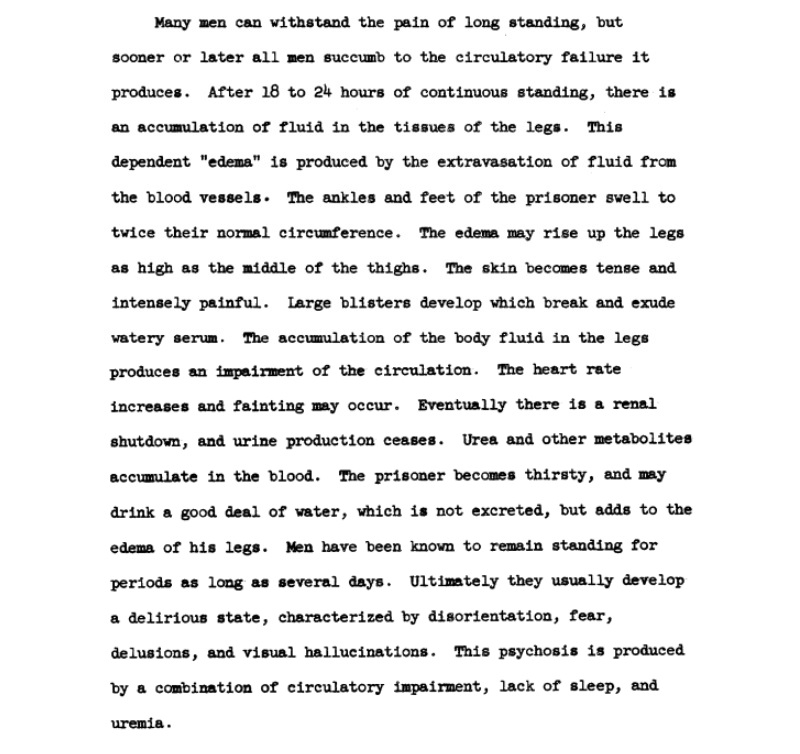 A decade later, techniques would later be used a futile attempt to break Yuri Nosenko, who the CIA suspected of being a false defector dispatched by the KGB. Far more recently, CIA has used prolonged standing to induce sleep deprivation in terrorism suspects.

In 2002, CIA officers proposed adopting this as one of the techniques from the military’s SERE programs.

When this was introduced to Guantanamo Bay in late 2002, it was done by creating a course around a chart listing coercion techniques. The chart was originally created by Albert Biderman while working for the Air Force in the ’50s.

Unlike the 2002 version, the original chart identified the techniques as communist methods which the government was eager to defend against and so quick to condemn. A copy of the chart was located in CIA’s declassified archives, released several months before 9/11. Other declassified documents show that the Agency possessed, consulted and disseminated Biderman’s work on the subject in the following years, as would the Defense Intelligence Agency during the STARGATE program a decade later. 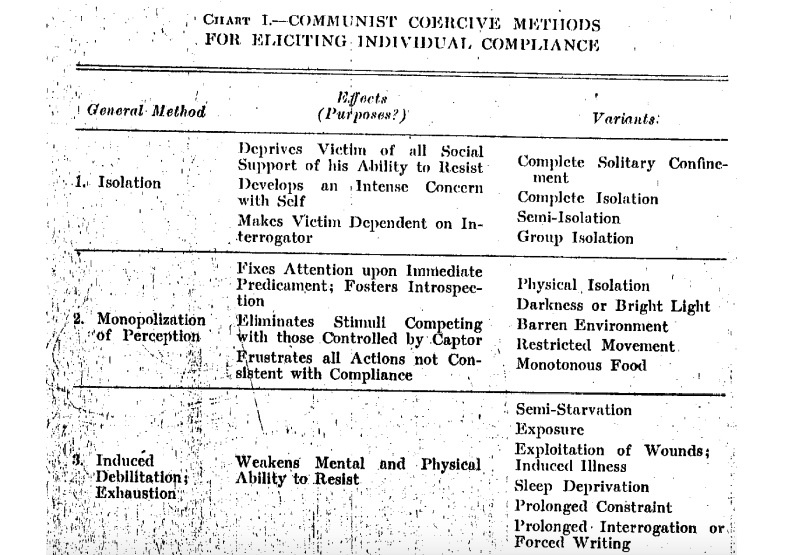 In other words, the Agency built parts of interrogation and torture program on techniques which they had previously decried as ‘nefarious,’ ‘inhumane’ and unacceptable in a democratic country.

You can read a less secret version of the original report, Brainwashing from a Psychological Viewpoint, below.