Eleven years before the House Select Committee on Assassinations declared they were “certain Yuri Nosenko lied about Lee Harvey Oswald - whether it was to the FBI and Central Intelligence Agency (CIA) in 1964, or to the committee in 1978, or perhaps to both”, the Agency’s internal security report abandoned logic to conclude that the Soviet defector was a trustworthy individual who hadn’t been sent over by the KGB.

In the light of what’s known today, each of the criteria it used to declare Nosenko a bona fide defector now point to the opposite conclusion. The case for Nosenko being a double agent is so strong that his former CIA handler wrote a book whose conclusions which were later confirmed by a former KGB Chief.

The 1968 report from CIA’s Office of Security was provided to the FBI, and subsequently released as part of the initial response to a FOIA request for Yuri Nosenko’s FBI file. Nosenko, who had first approached the Agency in 1962 to offer a limited amount of information, became a national priority when he decided to defect in January 1964, essentially claiming that he had been the case officer for Lee Harvey Oswald during Oswald’s time in Russia and declared defection to the Soviet Union. Doubt was soon cast on Nosenko’s claims, in part because of things revealed by another alleged KGB defector, Anatoliy Golitsyn. While controversial and often publicly dismissed, Golitsyn’s public claims and transcribed CIA memos have withstood a significant measure of scrutiny. According to the very well respected book Wedge: The Secret War between the FBI and CIA, of Golitsyn’s 148 claims which could be verified or falsified, Golitsyn had a 93.9% accuracy rate. 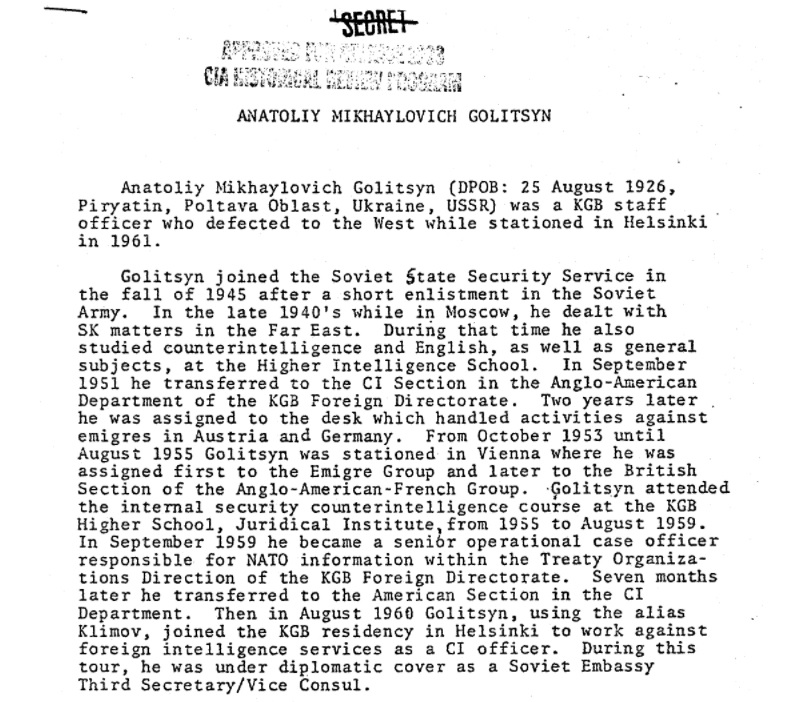 The report, which Nosenko’s CIA handler would later declare a “whitewash,” concluded that he was a bona fide defector by manipulating both facts and logic. The report declared that there was no reason for the KGB to have dispatched Nosenko, with a single exception: Oswald. The report described the possibility in vague terms, stating that it was “conceivable that the Soviet leadership might” have taken steps “to convince the United States of their non-involvement in the assassination” of President Kennedy. 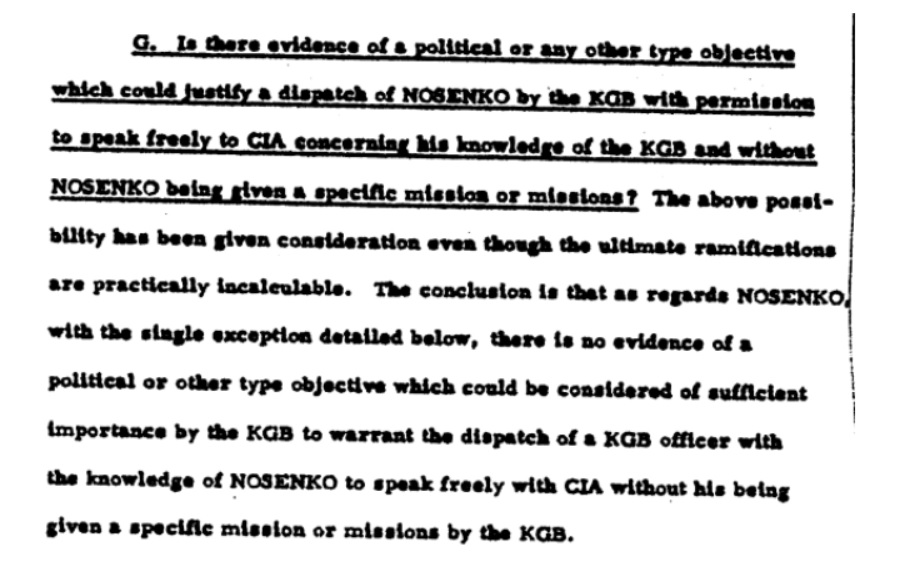 In describing this possibility, the report’s bias becomes blatantly apparent. According to the report, it was “conceivable that the Soviet leadership might have been prepared to take extreme steps to convince United States authorities of their non-involvement in the assassination,” but only based on “the premise that in fact there was no Soviet involvement.” The report went beyond ignoring the possibility that the KGB might have played a role in, or simply decided not to act to prevent, the assassination of President Kennedy. Instead, it argued that such an event wouldn’t provide the KGB with a motive to convince the United States of their non-involvement. 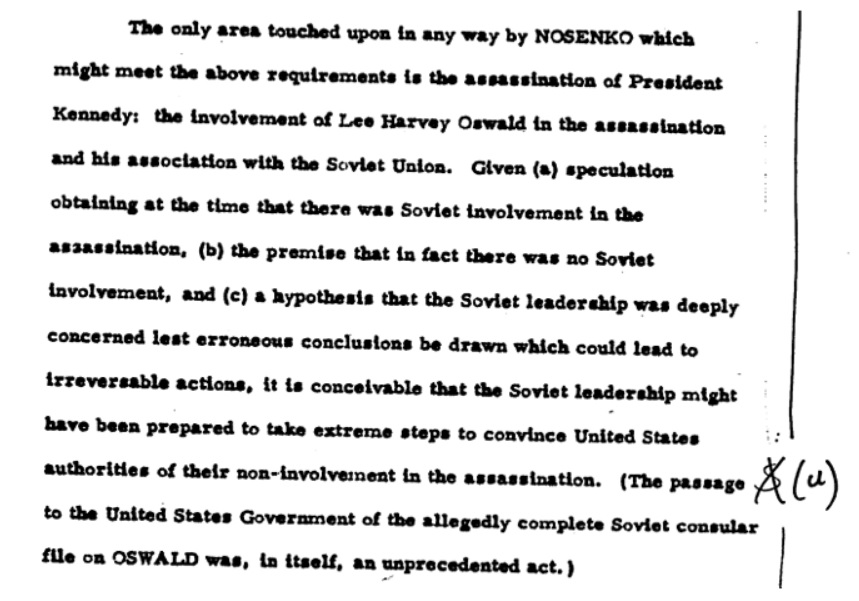 According to CIA’s report, Nosenko’s information was presented as the KGB’s “inside” story on Lee Harvey Oswald. This “clearly indicated that there was no KGB relationship with Oswald” and “no operational interest in Oswald.” Nosenko’s claims would indicate that the KGB had nothing to do with Oswald and therefore with nothing to do with the Kennedy assassination. While the latter may have been true, it is difficult to accept that the KGB would decide not to attempt to debrief a former Marine who was attempting to defect to the Soviet Union. Regardless of whether or not the KGB would have accepted Oswald’s bona fides, it beggars belief that they would not actually attempt to analyze the situation.

The report concluded that convincing the U.S. of non-involvement with Oswald in the aftermath of the assassination of Kennedy didn’t provide a plausible motive for dispatching Nosenko. According to Nosenko’s CIA handler, the report’s author, Bruce Solie, “had only a shallow knowledge of the Soviet scene, knew little about the KGB, and possessed no experience in handling foreign agents.” Solie’s inexperience and bias both show in his declaration that there was no way to explain Nosenko’s initial 1962 contact with CIA, 17 months before President Kennedy had been killed.

It’s not uncommon for counterintelligence agencies to produce dangles in the hopes that an opposition service will bite. If they do, they have control of someone providing information to their adversary, which is a standard counterintelligence opportunity. It would hardly be unprecedented for the KGB to offer “chicken feed”, low quality intelligence that can boost the perceived reliability of a double agent, to CIA. Moreover, if the KGB had dispatched Nosenko in 1962 for reasons unrelated to Oswald, the reason is self-evident.

The information offered by Nosenko in 1962 offered an explanation for how one CIA’s prized GRU assets, Lieutenant Colonel Pyotr Semyonovich Popov, had been caught and executed. While Nosenko’s CIA handler would later conclude the Agency may have been the victim of betrayal, Nosenko offered the Agency a simpler explanation, and one that would attempt to steer the CIA away from a molehunt. According to Nosenko, Soviet surveillance of George Winter had turned up a letter addressed to Popov. This allegedly prompted surveillance of Popov, which yielded confirmation of his involvement with the U.S. While this is certainly possible, and may well be the truth, the possibility that Nosenko would be dispatch for this self-evident reason or for preparation for the assassination of President Kennedy are ignored and explicitly dismissed, respectively.

Solie then proceeded to contradict what he had stated three paragraphs earlier. After declaring that Nosenko’s “information clearly indicated that there was no KGB relationship with Oswald, that the KGB had no operational interest in Oswald, and that as a matter of fact Oswald had presented the KGB with a continuing series of problems,“ Solie declared that it was “not sufficiently convincing.” 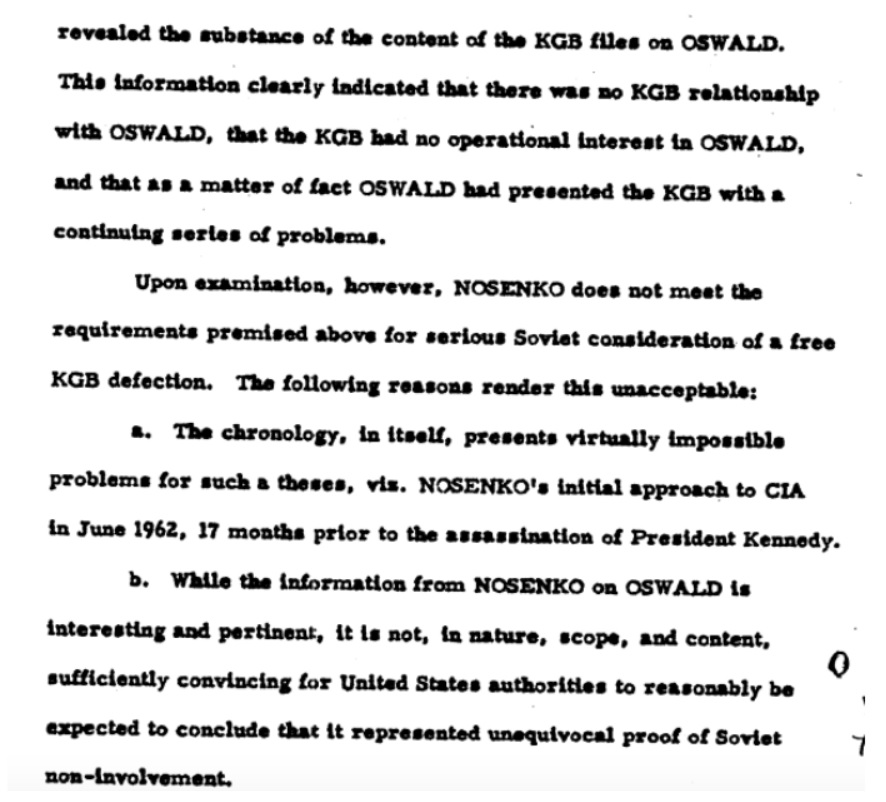 Solie gave no indication of understanding that “unequivocal proof” is never expected to exist in the realm of covert action and assassination. He does, however, conclude his argument against a motive for dispatching Nosenko by contradicting himself once more. Having declared Nosenko’s information and career as “convincing” evidence that the KGB had “no operational interest” in Oswald, Solie argues that Nosenko’s career and position “would not permit even serious consideration that Nosenko could have logically been fitted” into a category of people who would have known about KGB involvement in the Kennedy assassination. While this is certainly true, Solie apparently chose to ignore the fact that Nosenko’s inability to convince the CIA of KGB involvement did nothing to contradict Solie’s assertion that Nosenko had convinced him of the opposite. 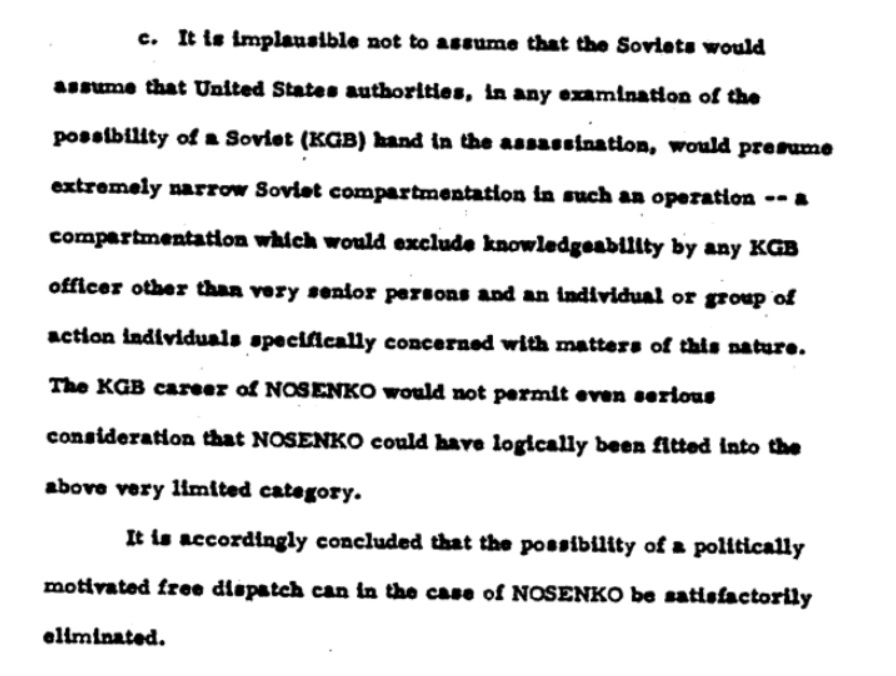 The whitewash evident throughout the file is neither unprecedented nor difficult to understand the rationale for. CIA Director John McCone has been revealed to have been at the heart of CIA’s “benign cover-up.” According to CIA historian David Robarge, the purpose was to focus the Warren Commission and others on “the ‘best truth’ - that Lee Harvey Oswald, for as yet undetermined motives, had acted alone in killing John Kennedy.” The Warren Commission itself was explicitly formed for the same purpose. According to a recording of President Johnson, Chief Justice Warren had no interest in participating in the Warren Commission until LBJ “pulled out what Hoover told [him] about a little incident in Mexico City.” After LBJ explained the stakes, the Chief Justice apparently broke down crying and agreed to do whatever LBJ said.

The Mexico City incident referred to Oswald’s attempts to contact the Soviets, including Valeriy Kostikov, who CIA “believed to work for Department Thirteen of the First Chief Directorate of the KGB. It is the Department responsible for executive action, including sabotage and assassination.” A letter allegedly written by Oswald to Kostikov’s alias discussed completing their business, all facts which were kept from the public for a long time as part of the Agency’s benign cover-up.

Given their desire to avoid World War III and the other aspects of CIA’s cover-up, it’s not surprising that the Agency would have continued the “benign cover-up” with a report whitewashing Nosenko as a bona fide defector - especially if the KGB truly had no involvement with the assassination of President Kennedy.

An appeal has been filed for more material from Nosenko’s FBI file, and copies of Nosenko’s interrogation transcripts, reports on Nosenko, and tape recordings are pending release from the National Archives. In the meantime, you can read CIA’s 1968 report on Nosenko here.