One of the more persistent, but less well-known, conspiracy theories surrounding Watergate is the crash of United Airlines flight 553 that killed Dorothy Hunt, a former government employee who was transporting $10,000 in hush money on behalf of her husband and Watergate burglar, E. Howard Hunt. At the time, these theories were widely pushed by activist Sherman Skolnick, who used his call-in hotline to spread this and other conspiracy theories, making particular use of the control tower recording of the UA 553 crash having been preserved by the Federal Bureau of Investigation.

According to Skolnick, Dorothy carried $2 million in traveler’s checks and money orders stolen from the Committee for the Re-Election of the President, $50,000 in cash, and documents that may have led to the impeachment of President Richard Nixon. These claims are entirely unsubstantiated, with almost no support from documented facts or public officials. Only one public official seemed to have supported the theory that Dorothy was deliberately murdered in the plane crash - former White House Counsel Charles Colson. In an interview with Richard Bast and related in Time Magazine, Colson reportedly said, referring to the Central Intelligence Agency, that “I don’t say this to my people. They’d think I’m nuts. I think they killed Dorothy Hunt.”

Neither Colson, nor most conspiracy theorists, seem to address the fact that Illinois Congressman George W. Collins was also killed in the same crash. The interview prompted Time to speculate that Colson was either deflecting from Nixon’s culpability, or that he had simply “lost touch with reality.“ 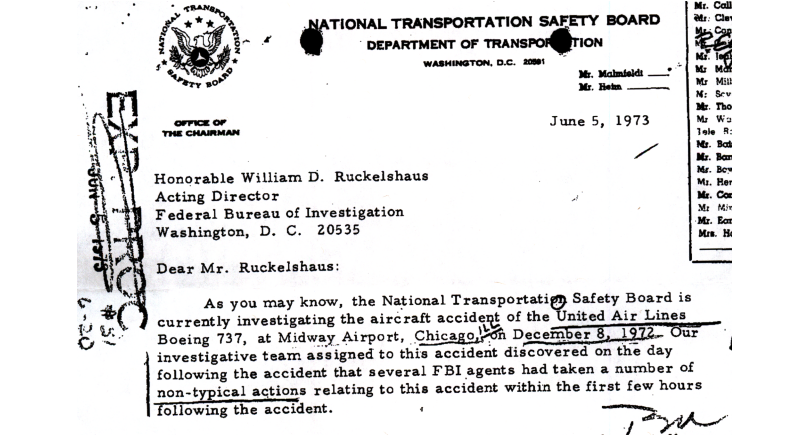 The closest to any other official source endorsing the conspiracy theory that Dorothy’s plane crash was engineered is a June 5th, 1973 letter from the Chairman of the National Transportation Safety Board to Acting FBI Director William Ruckelshaus. The letter noted that the FBI arrived on the scene before the NTSB did, and that the Bureau listened to the control tower tapes and interviewed witnesses before the NTSB could. “These actions, particularly with respect to this flight on which Mrs. E. Howard Hunt was killed, have raised innumerable questions … It is likely that questions as to what specific actions were taken by the FBI in connection with this aircraft response, and why such actions were taken, will come up in a public oversight hearing … scheduled for June 13th, 1973.”

Far from endorsing the conspiracy theory, however, the NTSB Chairman merely noted that the case seemed unusual and that, given possible Watergate connections, there were questions that the NTSB and FBI would need to address. The letter was merely an attempt to pose the questions the NTSB felt were most significant, and to request all relevant records. Among the questions posed by the NTSB were, why was the FBI investigating and why so quickly, how many FBI personnel were involved, and what steps did the Bureau take.

The letter also suggested that the FBI and NTSB more formally liaise in the future, and delineate the specific responsibilities of each agency and how they would work together. 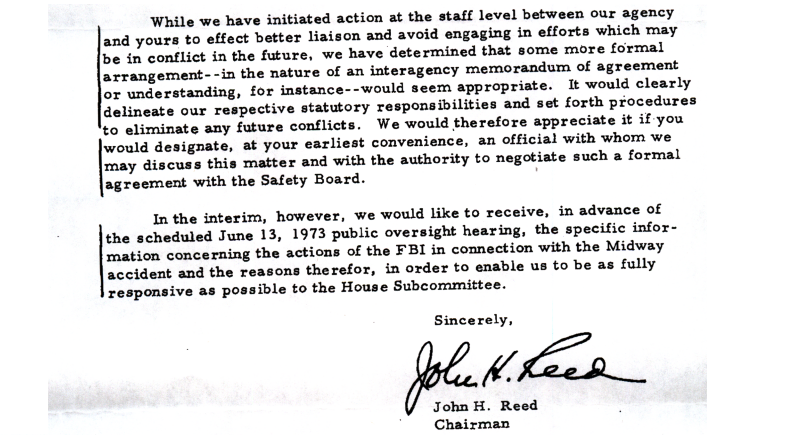 The FBI file provides one small breadcrumb to conspiracy theorists, noting that a federal narcotics agent was aboard the plane and survived the crash. 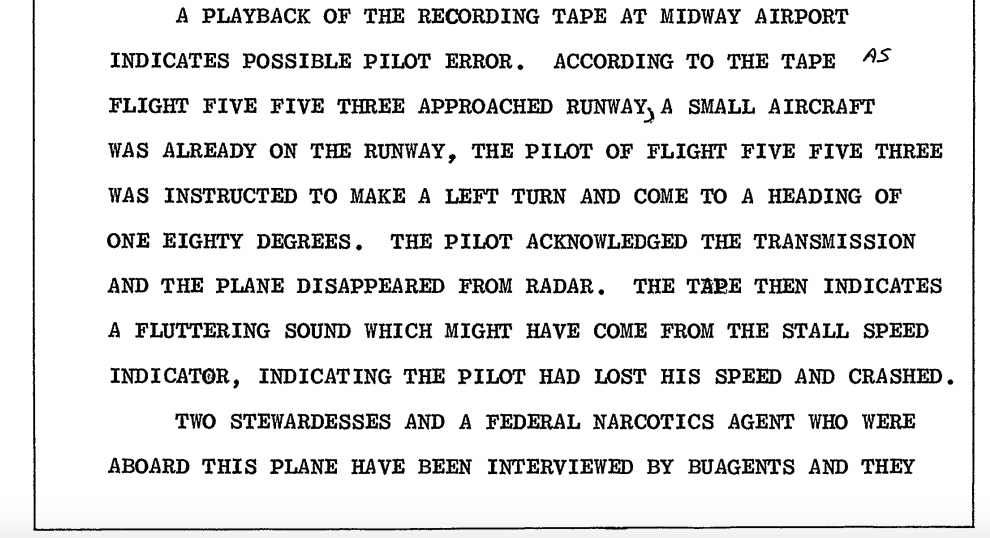 The FBI file and the NTSB report both reject any possibility that the crash was caused by sabotage or anything other than pilot error. The FBI file notes that “information from [the] Federal Aviation Administration reflects no possibility of any cause of crash other than pilot error.” The NTSB also produced a 65 page report detailing the crash from a technical standpoint. The report unambiguously concludes that there was no sabotage and that the crash was caused by pilot error.

Some, as the NTSB Chairman’s letter noted, have questioned the FBI’s purpose in investigating the crash. The FBI file repeatedly addresses this, noting that it’s standard procedure as crashes resulting from sabotage are within the FBI’s jurisdiction. Once the FBI determined that there was no likely sabotage, they ended their primary investigation. The FBI file also points to a second purpose: the assistance of the FBI Disaster Unit had been requested.

As noted in an above excerpt, the FBI’s review of the tower tapes indicated that the engine stalled. Once this was established and the FBI saw no indication of sabotage, they ended their investigation except to liaise with the NTSB and help identify bodies.

In a response to the NTSB Chairman’s letter, or similar inquiries, an FBI teletype explains that the Bureau had handed over all relevant records to the NTSB as soon as it became clear that there had been no sabotage and that the FBI had no jurisdiction. According to the FBI, the investigation was carried out by about 50 personnel who began arriving a little less than an hour after the crash, and continued arriving for another hour after. 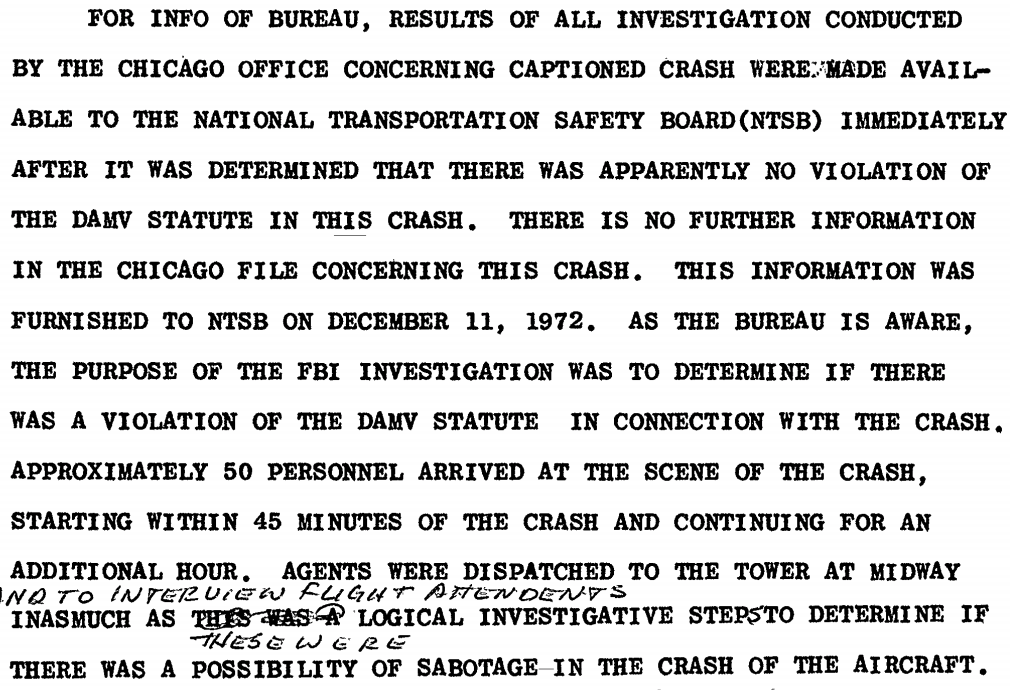 The FBI responded to questions about why they began arriving before the NTSB by saying that this fact reflected more on the NTSB than it did the FBI. The FBI teletype also wrote that the NTSB was “obviously not aware of the abilities of our investigators,” referring to the FBI’s speedy identification of the stall signal. 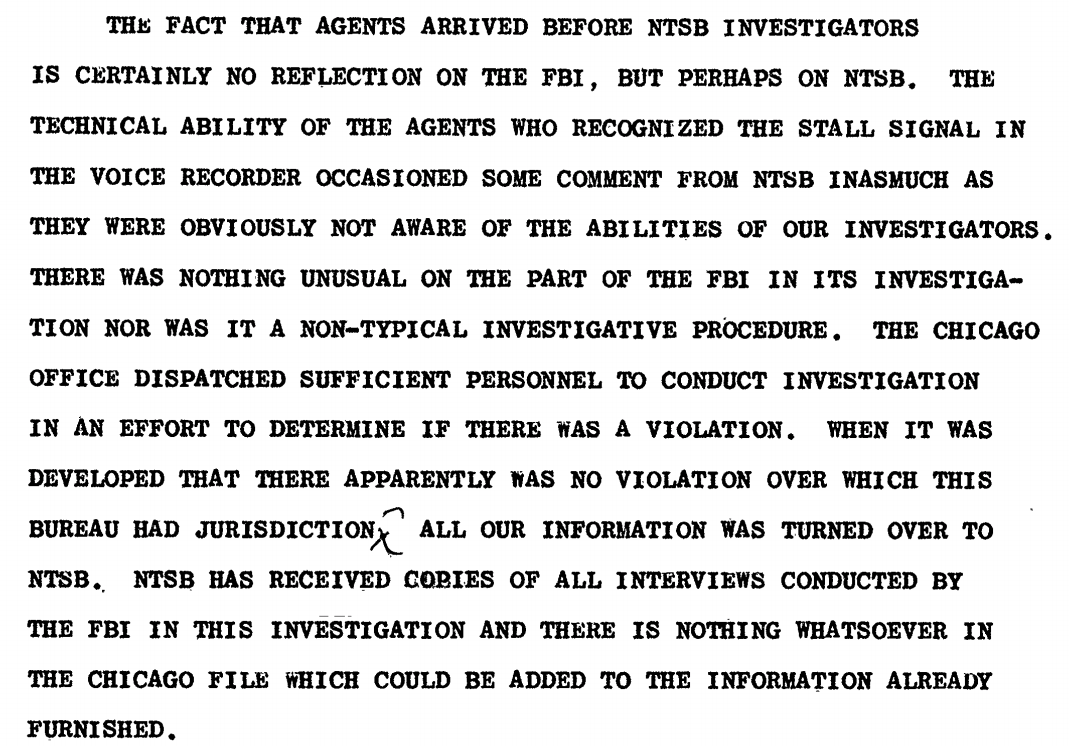 The FBI’s teletype spent a full paragraph informing its readers that everyone was very grateful to the Bureau.

The FBI file claimed that the Bureau didn’t know about Dorothy Hunt’s presence on the plane until after their primary investigation had concluded. 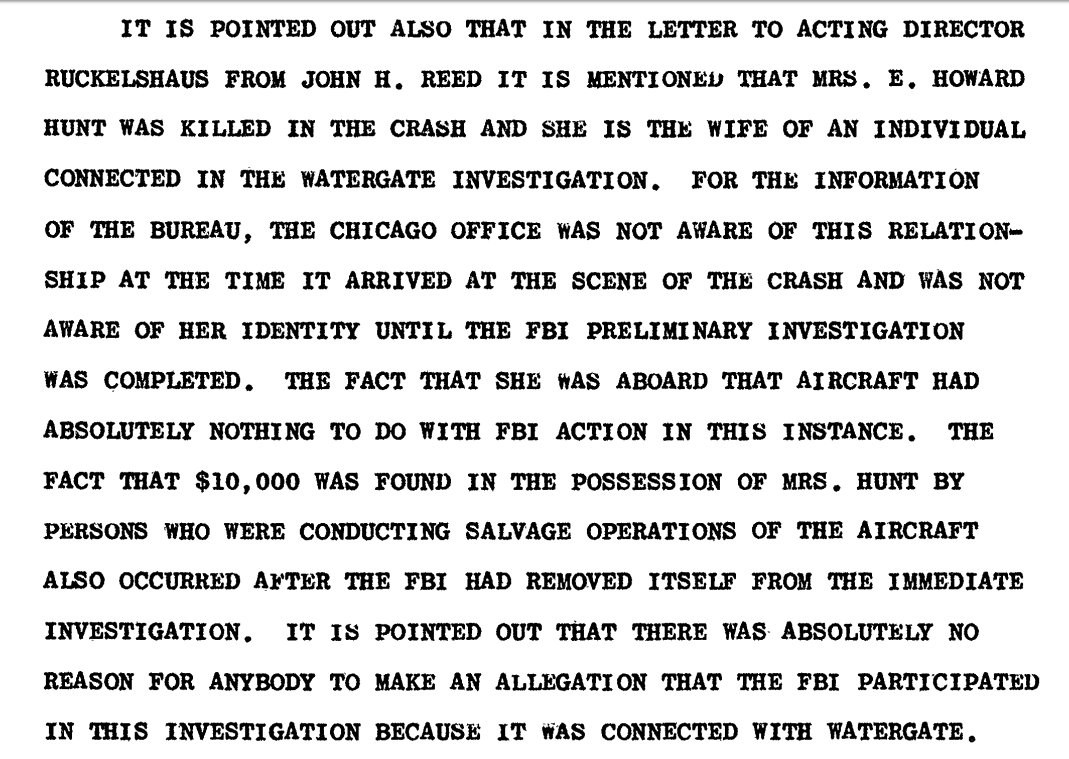 The teletype concluded by noting that the identification of dead passengers was routine, and that “there was absolutely nothing unusual or untypical” about the FBI’s investigation, which was “terminated within 20 hours of the accident.” 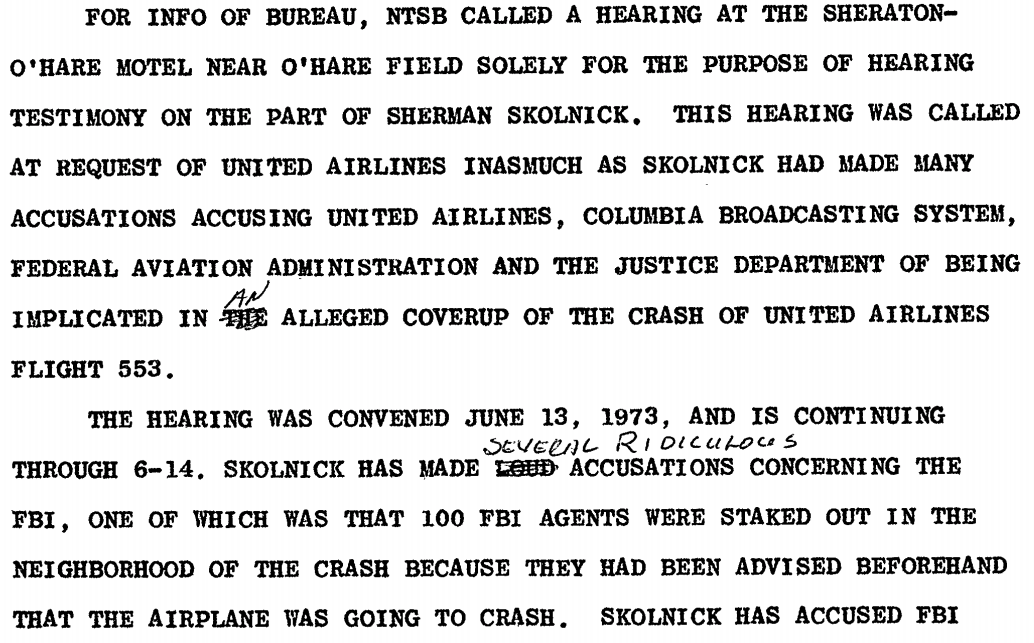 According to the FBI, Skolnick had accused them of “removing two million dollars from the aircraft” and claimed that “many of the passengers aboard the aircraft died of cyanide poisoning.” Skolnick not only connected the crash to the Watergate investigation, but to “a pipeline lobby, investment scandals in Switzerland, legislative acts in Costa Rica and underworld dealings in stolen currency.” The FBI’s Chicago office didn’t have anyone present at the hearings, instead getting their information from UA personnel and media reports.

The teletype also stated that the local news in Chicago had been covering the hearings, but that Skolnick wasn’t been taken seriously. According to the Bureau, “Skolnick’s testimony and the testimony of the witnesses he called has been completely unsubstantiated, and according to press reports persons in attendance snickered through Skolnick’s testimony.” The FBI’s liaison with UA reported that none of the conspiracy claims had been substantiated, and that they were “obviously a figment of Skolnick’s imagination.”

The consensus of every credible investigation has dismissed the conspiracy theories around UA 553, with technical reports detailing the crash and witnesses both on the plane and on the ground confirming the official narrative.

Yet the conspiracy theory persists in some circles. Why? Because some people just want to believe.

You can read part of the FBI file below, or the rest on the request page.