Panama has a long history of coups and interventions involving the United States that go back to the establishment of the Panama Canal, some of which resulted in pro-U.S. governments, while other seemed to benefit Communist groups. Documents show that the confessed assassin of Panamanian President José Antonio Remón Cantera was a Central Intelligence Agency asset, and that at least one other CIA asset was on the scene and arrested at the time of the assassination in 1955. Both also share ties to the Cuban community, as well as vague connections to the JFK assassination - and one of them may have also been involved in a plot to kidnap and/or assassinate Vice President Spiro Agnew and CIA Director Richard Helms. 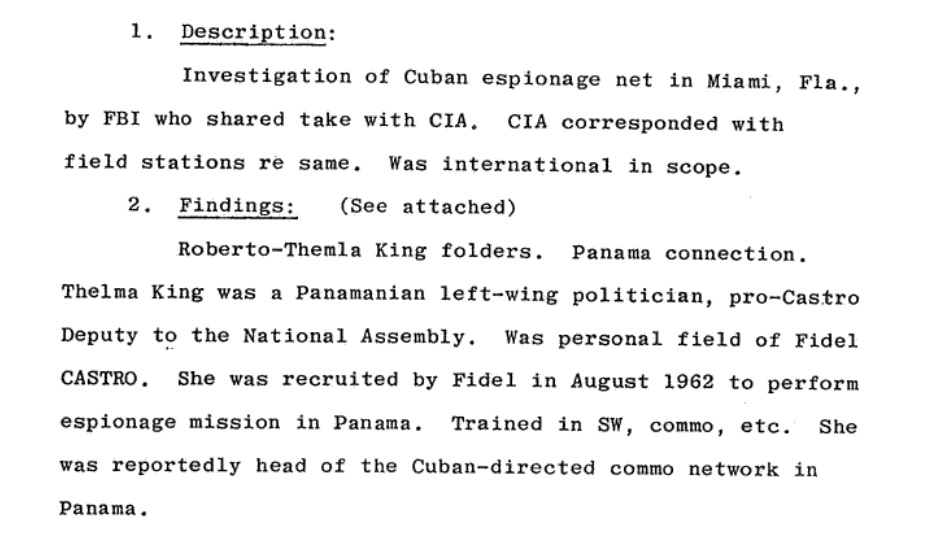 The full story, involving coups and revolutions, secret arms shipments, and double (or triple) agents, is too complex to cover in a single article. 113 pages of documents, embedded at the end of the article, hint at a web of intrigue and coincidence that stretches from 1955 Panama, to 1963 Dallas, and onto 1971 New York. The two main characters in this story are Thelma King, a Panamanian revolutionary politician and a friend/agent of Fidel Castro, and Ruben Oscar Miro, a Panamanian revolutionary lawyer with political aspirations and a friend/agent of Raul Castro. Both were also secretly assets for CIA. 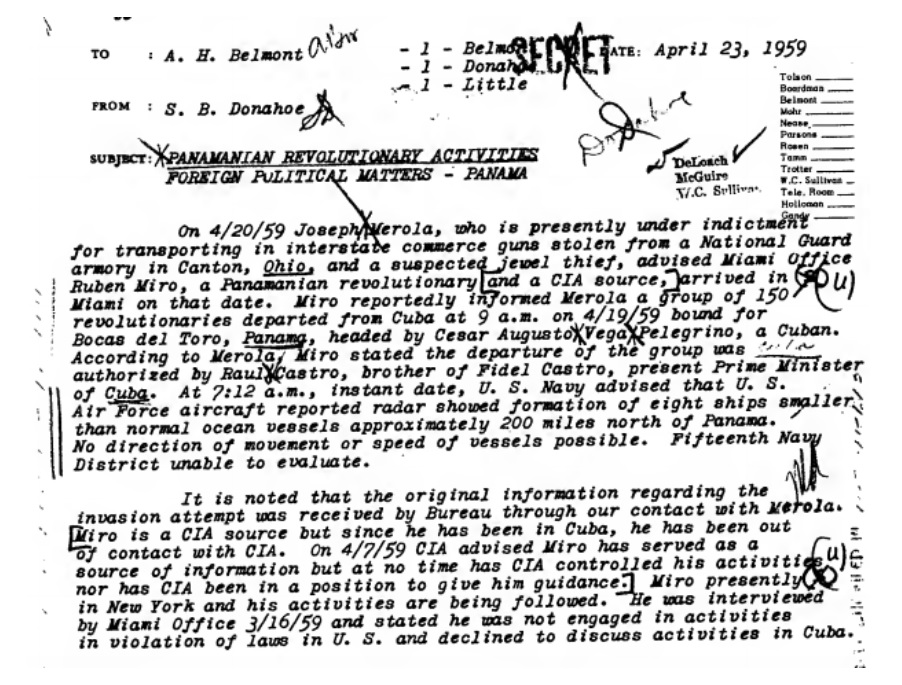 When Miro described meeting his contact in a U.S. intelligence agency, he said that he had helped him and several other Americans in a trial in 1940 or 1941. It’s not yet known when King (Castro’s “top agent in Panama”) became associated with the Agency, but she was a CIA asset as early as 1963, and by 1971 was described by the Agency as an “agent” who had been a source of information for a long time. A year earlier she had been considered a threat to President Richard Nixon during his trip to Europe, but in 1971 she was in the U.S. and connected to a plot to kidnap and/or assassinate Vice President Agnew and Director Helms, a plot which is briefly described in the MHCHAOS documents that had been sent by the Agency in response to a FOIA request.

The description was vague, but there was enough information to find a more detailed mention in a copy of the Agency’s Family Jewels. Although redacted in one place, it identified the individual as “Miss King” in another.

This led to another mention in a previously TOP SECRET file, which identified her as “a female agent of the Latin American Division … the agent involved here was Thelma King.” Another memo, previously marked both SENSITIVE and SECRET, identifies her not as an agent but simply as “a Latin American revolutionary.” The name of the project, which received attention from the highest levels of the CIA and Federal Bureau of Investigation, was PARAGON.

Project PARAGON is described in another memo as focusing on “persons associated with [a] New Orleans urban guerrilla group.” 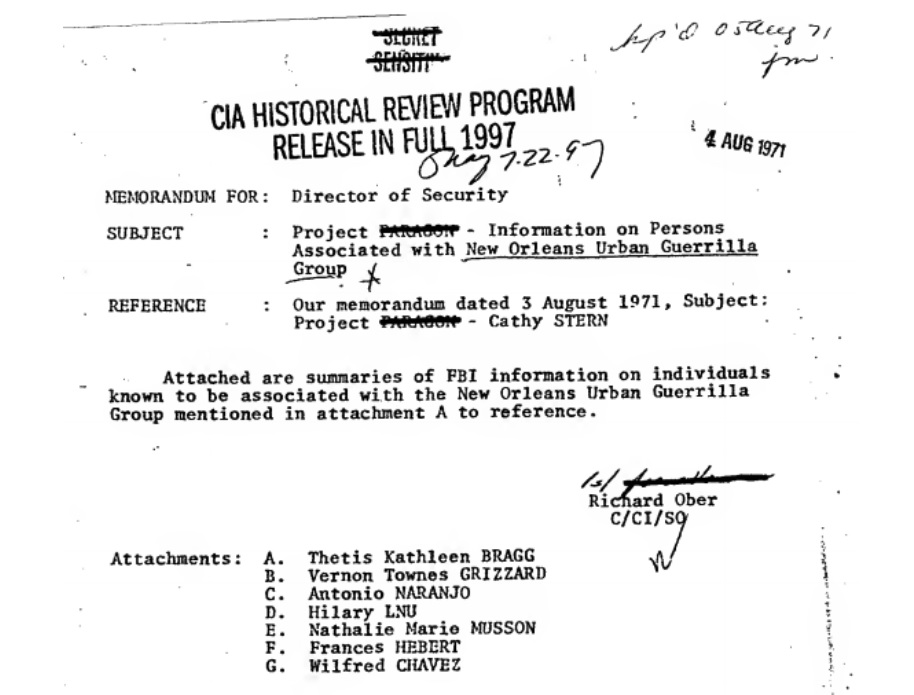 Included in the list of people associated that group was New Orleans District Attorney Jim Garrison, who had previously attempted to prove a CIA connection to the Kennedy assassination in 1963. Coincidentally, the 1963 assassination was the previous major appearance of King (AKA HYSAGE/HYSAGE-1) in the currently available CIA files.

On November 22nd, 1963, King was meeting with her CIA handler, Jake Esterline (AKA PONCHAY). The two were speaking when they first received news about the death of President John F. Kennedy. An initial memo shows that she immediately became very upset and became convinced that the assassination was carried out by racial extremists. Esterline rejected this, along with her later assertion that there was a coverup of the assassination by right wing extremists amongst America’s police. The most significant things that she said about the assassination, however, were held very closely and never made it into the JFK assassination materials. K. Michelle Combs, the Associate Director for Research and Analysis of the Assassination Records Review Board, later found that it was not relevant to the JFK assassination. However, a single page hints at the true importance of King’s discussions with Esterline and her status as a double/triple agent among the Panamanians, Cubans, and Americans which had begun as early as 1962. 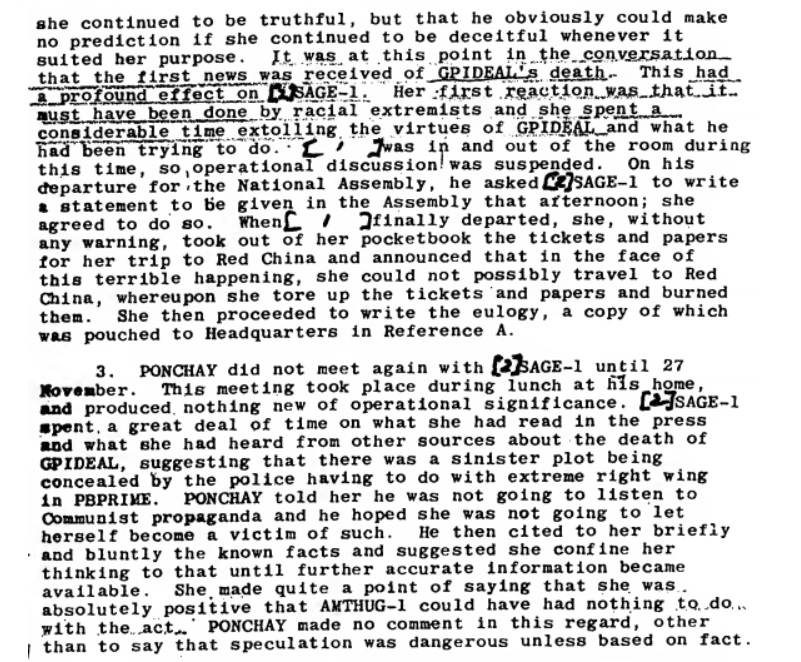 According to the note, Thelma King began crying as soon as they heard about Kennedy’s death, saying “something to the effect of they said they would not do it.” As she regained her composure she stopped talking about it, but Esterline was convinced that “they had been talking about Fidel, Che, Raul and PINIERO (head of Cuban intelligence).” Even more significantly, Esterline reported that Thelma had talked about meeting Lee Harvey Oswald, possibly in Cuba. 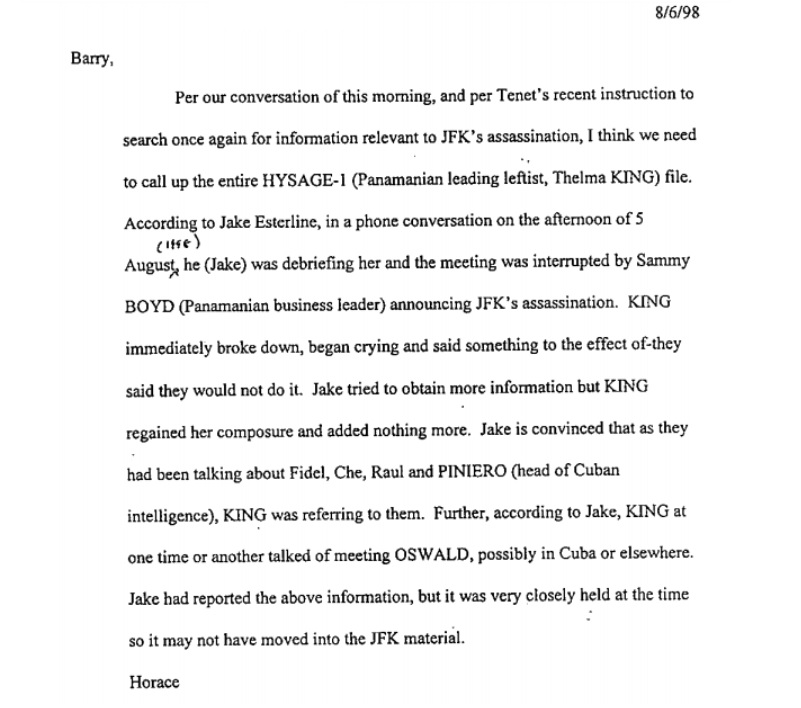 The fact that Combs found nothing else relevant to the investigation of the assassination of JFK boggles the mind - especially since she had been arrested for a Presidential assassination eight years before Kennedy died - and that she may have been the woman who left the “killzone” just prior to the assassination. 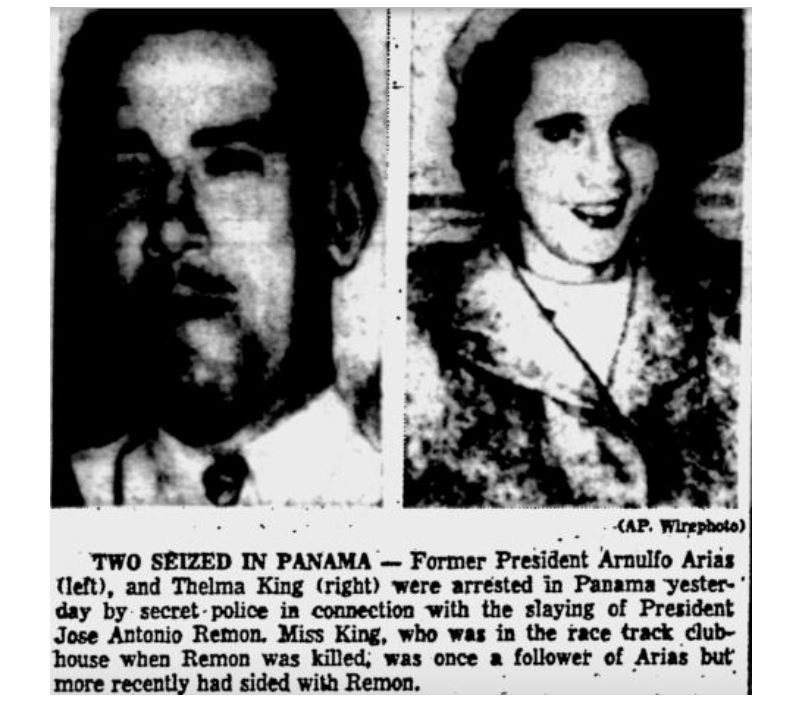 Despite some reports that she was no longer allied with former Panamanian President Arnulfo Arias (who had been pro-Nazi and was also arrested at the scene), she would remain tied to him and the Cuban government for years after. While it’s unclear if she was associated with the Agency at the time, the confessed assassin’s relationship with the Agency is documented as having begun six years before President Remon was shot down. Curiously, the assassin, Miro, would run for office with Arias. It’s not been established when their relationship began. However, while King and Miro were double or triple agents working for Panama, Cuba, and the United States, it’s significant to note that Secretary of State John Foster Dulles said that “no Communist issue was involved” in the assassination. 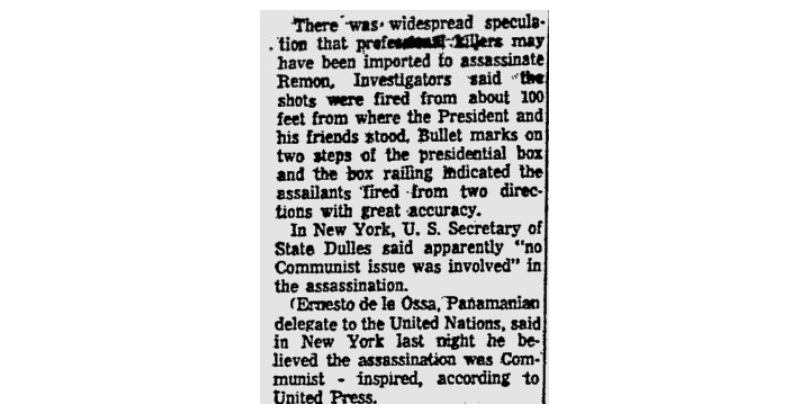 Ruben (Reuben) Oscar Miro (Guardia) was arrested for and confessed to the assassination, though he later recanted and was acquitted. However, in his confession he implicated the new Panamanian President, Jose Ramon Guizado. As a result, President Guizado was removed from office and the Presidency was assumed by the next in line, Ricardo Arias (no relation to former President Arnulfo Arias). Guizado was eventually cleared of after Miro withdrew the confession, but not until after his political career had been ended. 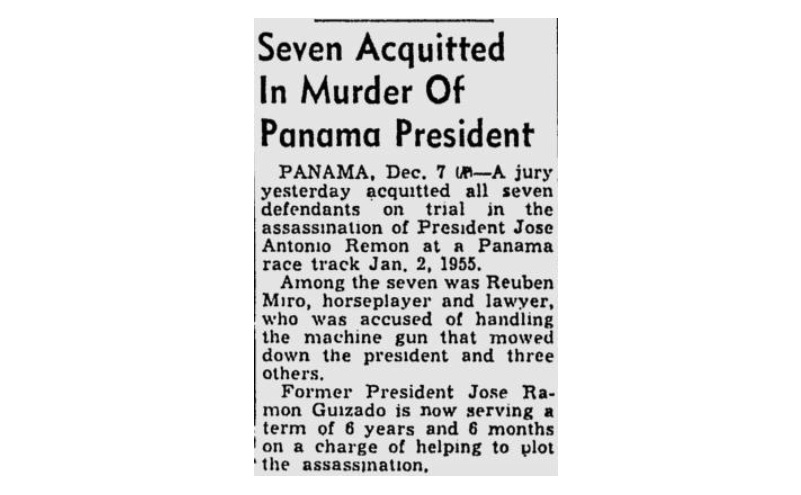 Like King, Miro also shared an odd connection to the Kennedy assassination. He was friends with Watergate burglar and accused assassination participant Frank Sturgis, and the two spent time together in Miami. He also shared strong ties with the Castros, and had planned an invasion of Panama with Raul Castro before Fidel had put a stop to it. Miro continued to try to foment a revolution, offering preferential treatment to whoever would help him – whether it was the State Department, CIA, or simply an arms dealer or businessman. 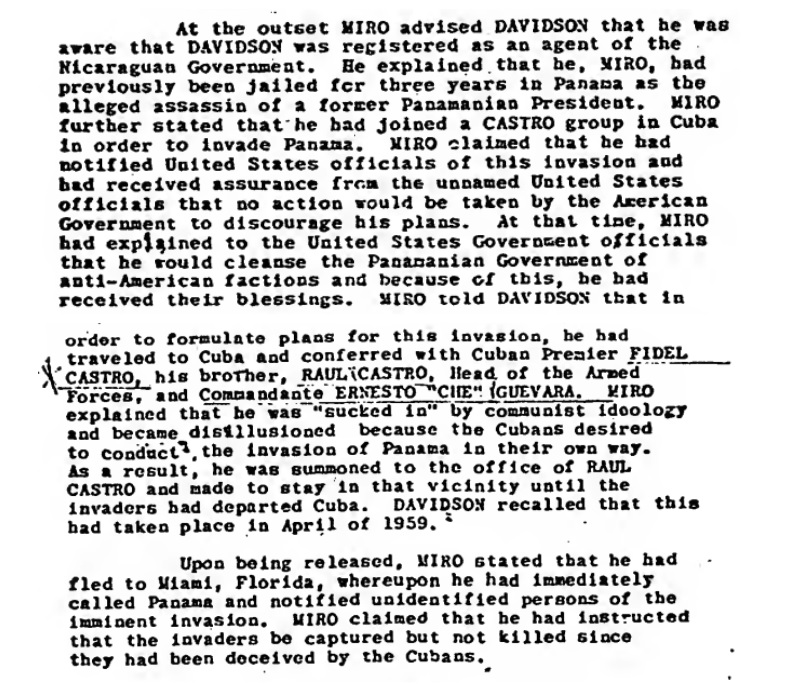 Many things about King remain unclear in the worst way possible, including when she began her association with the Agency and a 1979 comment that she made about the Iranian hostage crisis. “I don’t support the seizure of the hostages, but we don’t owe any favors to the only country [the U.S.] in the world that has harmed us. We don’t have to resolve a problem just so Carter can get re-elected…” It’s hard to look at statements like this, from a double or triple agent used by both the U.S. and Cuba, and not think of the October Surprise allegations surrounding the timing of the release of the hostages. 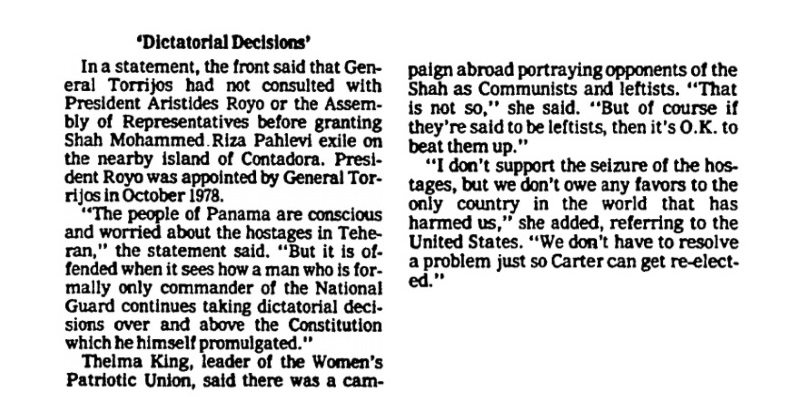 As it stands, there is more left unknown about these two than there is known. FOIA requests have been filed with the CIA and FBI to learn more. In the meantime, you can read a collection of already declassified files on them below.