A formerly TOP SECRET memo to the CIA Director written by the Agency’s Office of Political Analysis shows that as early as August 1980, the Agency had concluded Iranian hardliners such as Ayatollah Khomeini were “determined to exploit the hostage issue to bring about President Carter’s defeat in the November elections.” The memo, issued days after Khomeini was alleged to have accepted the Reagan campaign’s offer, appears to have been either unavailable to or ignored by those composing the Joint Report of the October Surprise Task Force.

While the document doesn’t prove the Reagan campaign intended to collude with Iran, it does document Iran’s motives and matches the October Surprise narrative outlined by former CIA officers George Cave and Duane “Dewey” Clarridge.

The document’s opening summary left no doubt that not only were Ayatollah Khomeini and other Iranian hardliners “determined to bring about President Carter’s defeat,” but that they wanted the world to know it. Khomeini intended to use the hostages to demonstrate the weakness of the U.S. in general and President Carter in particular.

Significantly, this information is omitted from the October Surprise Task Force’s report. The problematic report outlined four motives that Khomeini and others in the Islamic government had for “sustaining the hostage crisis.” None of the motives discussed in the section titled “The Islamic Government’s Motives in the Hostage Crisis” include Khomeini’s confirmed desire to influence the outcome of the 1980 Presidential election.

The body of the memo elaborates on the conclusions in the summary, explaining that Iranian leaders saw the elections as a chance to humiliate Carter. This seems to have been a natural extension of Khomeini’s rhetoric that Carter didn’t care about the hostages, but that in ‘typical American fashion’ he was using them in a cynical ploy internationally and for reelection. According to the Agency, Khomeini was “determined to be remembered as the man who brought down the Shah and the current administration in the U.S.”

The memo acknowledges that the Iranians seemed unconcerned that, upon election, Reagan “would adopt a tougher approach to the hostage situation.” While this seemed incongruous at the time, it makes more sense in light of both the allegations of collusion, and the fact that the hostages would be released minutes after Reagan was inaugurated in accordance with terms reached with Carter just prior to the inauguration. At the time, however, the CIA focused on the Iranians apparent confidence that the U.S. would unable to rescue the hostages “no matter who is President.” This apparent confidence makes the decision to release the hostages immediately after Reagan’s inauguration that much more suspect. To the CIA, Khomeini’s only interest in who the next President would be was his desire to take down the current administration. 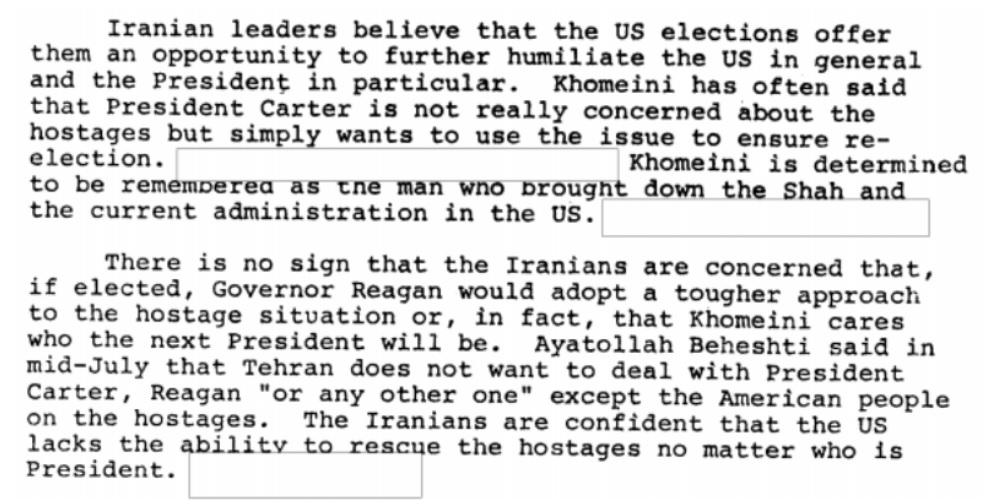 In addition to simply preventing the hostages’ release, the CIA memo predicted that the Iranian hardliners would use trials against the hostages as a means for further humiliation. Among other things, the Iranians were already claiming that some of the personnel who had been assigned to the American Embassy in Tehran were CIA employees. The Iranians allegedly planned to prove this using CIA documents they had seized from the Embassy in the hopes of further undermining and humiliating the U.S. and justifying the hardliners stance. The Agency anticipated that “at least some” of the hostages would be found guilty of espionage.

The memo concludes by noting that Khomeini was also in a position to create problems for the U.S. by encouraging protests in Iran and by students in the United States. Even absent a word from Khomeini or anyone else in Tehran, the Agency worried that “Iranian students in the U.S. and their Palestinian allies may want to influence the U.S. elections by sparking violent confrontations with U.S. citizens during demonstrations.” Similarly, Khomeini was in a position to “stir up trouble” with Shia Muslims located near Saudi Arabia’s major oil facilities to put additional pressure on the U.S.

While the memo doesn’t confirm the Reagan campaign’s collusion, it does prove a shared goal between the Iranians and the Reagan campaign - the defeat of President Carter. It also matches the timeline of allegations as well as the other known facts. That there appears to be no mention of it in the Task Force Report which is widely cited as discrediting the October Surprise is significant. The memo also addresses long standing objections to the October Surprise allegations by discussing Khomeini’s indifference to the identity of the next POTUS as opposed to his desire to see the current administration defeated.

The release of an estimated 3,400 pages of FBI files on the October Surprise investigation is pending. In the meantime, you can read the memo below.