If you ask someone about Frank Sturgis AKA Frank Fiorini, you’ll probably get a blank look or a something about Watergate. Even though I knew his name popped up in other contexts, I was willing to write off his 75,000 page FBI file as an historical anomaly. A recent discovery, however, has emphasized the importance of his file, and why we need it released.

Despite numerous denials from the CIA and assertions that Frank Sturgis was never employed by the Agency, a pair of documents have surfaced that clearly contradict this and show the Justice Department was aware of it. We won’t know the full extent of the file - which is more than four times as long as the 17,000 page FBI file on Watergate - until it’s released, but there are a number of things that are certain to be in it and which have very little official documentation available to the public.

Sturgis’ career began in Cuba before Castro’s rise to power, when he was an ally to the Castro brothers in their opposition to Batista. During this period, he was a paramilitary who fought the government and made friends with a number of other Cuban paramilitaries, as well as the American government. According to Sturgis, he began making contact with the FBI and CIA in 1959. By 1961, he was opposed to Castro and became involved in the failed Bay of Pigs invasion and other CIA sponsored and tolerated anti-Castro activities. According to Sturgis, his CIA control officer was Jose Joaquin Sanjenis Perdomo AKA Sam Jenis.

The Agency has continued to deny this, but it’s known that Jenis did have a relationship with the Agency. Some of the papers relating to him are still being withheld in National Archives as part of the JFK Assassination records. These activities are specifically mentioned in the lawsuit that led to uncovering the Iran-Contra scandal as the beginning point for the modern nexus between paramilitary operations, assassinations, and the trafficking of weapons and narcotics.

Despite being in contact with the Bureau beginning in 1959, it’s unlikely that they included much information about his CIA activities in their file at that time. There’s no question, however, that this changed later. While the Bureau looked at possible CIA connections in the aftermath of the Watergate break-in, they also took a much closer look at him in the following years when he became closely associated with the JFK Assassination. In 1976, Sturgis began claiming that Castro and Che Guevara had Kennedy killed, and that Lee Harvey Oswald was a Cuban agent. He later reportedly claimed to have met Oswald in Miami shortly before the Kennedy assassination.

In 1977, Marita Lorenz, a CIA agent, said that she had gone to Dallas as part of an operation including Frank Sturgis and Howard Hunt (both of Watergate infamy) along with several other Cubans. There, they allegedly met with Lee Harvey Oswald just before the JFK Assassination. The House Select Committee on Assassinations rejected this, but not before former CIA employee Victor Marchetti claimed that the HSCA had come into possession of a 1966 CIA memo stating that Hunt was in Dallas when Kennedy was killed.

While these allegations have been examined publicly, many of the relevant documents from both the FBI and CIA haven’t been released, or remain heavily redacted. Several important issues have barely been touched upon, such as Sturgis’ involvement in the ITT break-ins and breaking into various embassies, most notably the Chilean embassy. Other facts seem to have been only accidentally disclosed, such as the few details that are available about Sturgis’ CIA employment.

To date, only two documents are known to confirm Sturgis’ employment by CIA. The first is a memo from former CIA Director James R. Schlesinger which states that CIA Director Colby told him Sturgis had not been on the payroll for a number of years. Although the Agency has lied about the timeframe and type of employment for other Watergate connected individuals, this document remains one of two pieces of confirmation that Sturgis did, in fact, work for the Agency. 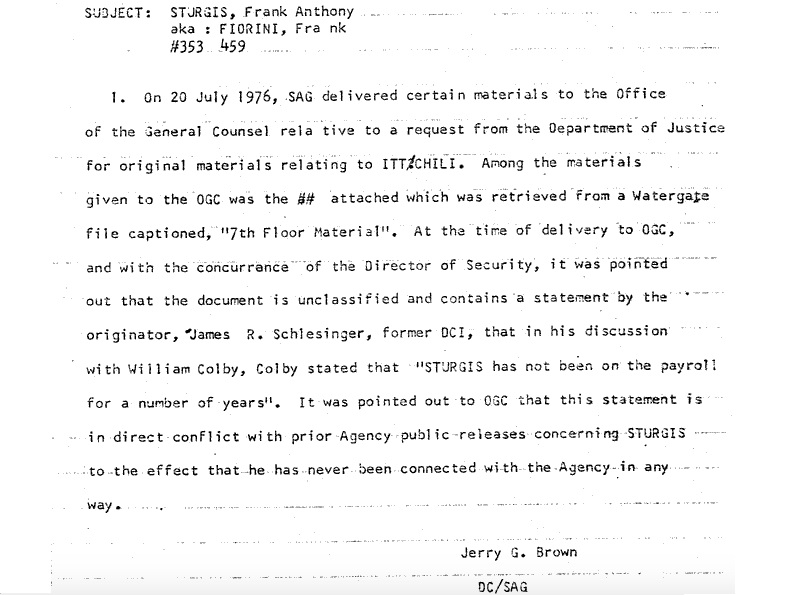 Significantly, the CIA memo specifies that the Department of Justice was given a copy of the memo with this admission. If the Bureau was given a copy, then the FBI file will surely contain more information about Sturgis’ CIA employment. If not, then the lack of the information in the FBI file will be proof that the Department of Justice helped the Agency cover-up relevant facts. Sturgis’ employment is further confirmed by a CIA draft memo which says he was an Agency contact in 1961. This same memo, however, went on to distort and minimize the CIA’s employment of another Watergate burglar, Eugenio Martinez.

Despite all of the attention on Sturgis, most of the information released on him has been scant and highly redacted. However, the last major batch of files released on him were in 1993 - while he was still alive. The 75,000 page file identified by the FBI will fill in the details for much of the information we have now and provide answers to questions we don’t know to ask yet. It will also greatly simplify getting the CIA to release its files on him. I hope you’ll help fund the release of this file - every bit counts, and if we don’t raise the full amount we’ll get as much released as we’re able.

Donate below, or on the request page. Thank you for your support.