A 1972 report from the Defense Intelligence Agency and the U.S. Army explored the numerous ways the U.S. Government believed the Soviet Union could attack or influence small groups of people through unconventional means. Some of these included telepathy being used to infiltrate dreams, while other scenarios focused on slightly more realistic possibilities - like Soviet spy planes being used to blind or hypnotize Americans. 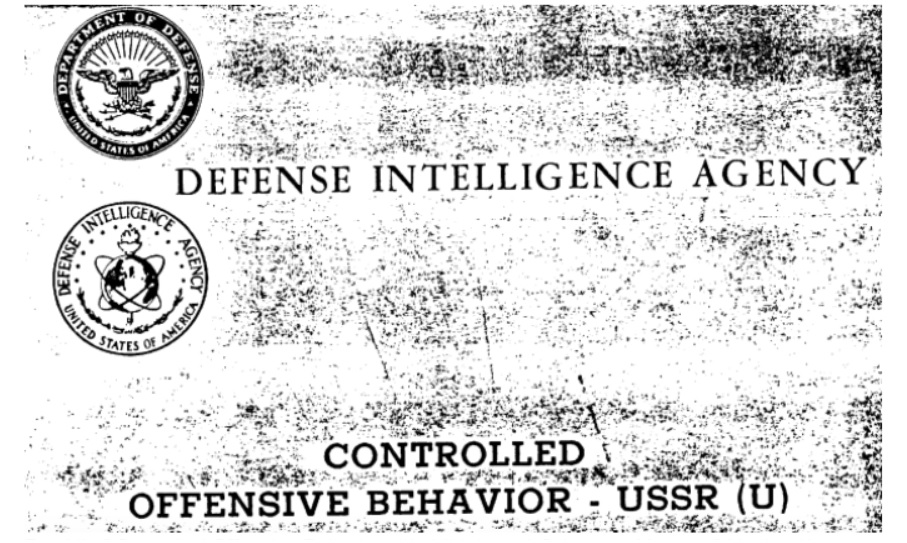 Part VI of Controlled Offensive Behavior, titled “Light and Color as a Means of Altering Human Behavior,” noted several incidents as indications that the Soviets were considering “the possibility of utilizing bright and flashing lights” as a form of mind control. While this possibility is, by itself, far from impossible, the context in which the report makes the suggestion is.

According to the subsection titled “psycho-optics,” Soviet bombers and naval vessels had reportedly used “unusual flashing or bright lights” to “temporarily blind and disorient” surveillance personnel. The blinding aspect is hardly surprising, though the disorientation aspect would be expanded and inexplicably connected to hypnosis and other forms of influence.

In some instances, Soviet pilots were reported to use spotlights to disorient American and NATO pilots. They would also “trickily switch their navigation lights on and off.”

None of these reports are terribly surprising, despite some superficial similarity to UFO reports regarding the HMS Valiant incident with the KOTLIN destroyer in 1968. What is surprising is that these events were connected to simultaneous research the Soviet Union was reported to be conducting. Rather than conclude that the these events were simple countermeasures being taken to disrupt attempts to track Soviet movements, the report connects them research into hypnosis and mind control.

As background, the report cites findings at a symposium in the U.S. that had concluded that strobe lights and other flicker effects can create disruptions in “the form of sleep, unconsciousness, hypnotic states, or other forms of interference with consciousness.” Other possible effects of flickering lights included “discomfort referable to the eyeball” and headaches. Other possibilities included the inducement of “visual illusions including color sensations, patterns of movement and development of odd shapes.” 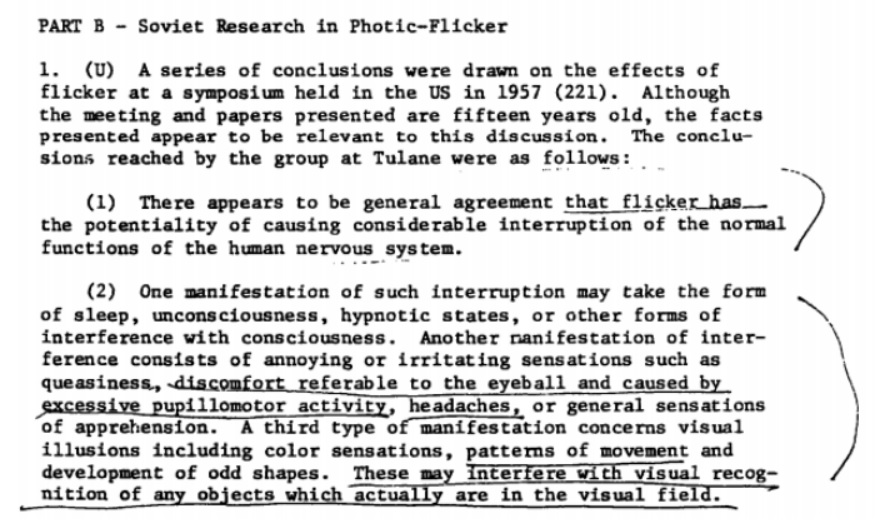 The report then connects this to Soviet research which reportedly showed that flashing lights could “achieve a degree of mental disorientation and confusion.” 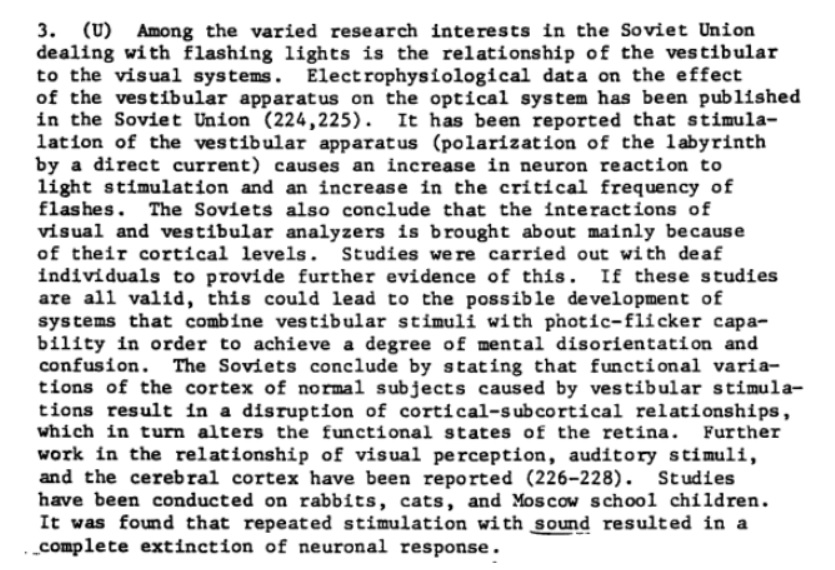 The report felt that the Soviet’s main interest was in red light, which would reportedly produce tension, irritability, and aggression.

How did research into hypnosis, sleep induction and the creation of tension and aggression get linked to Soviet aircraft? The red lights. Several of the reports cited and others from Air Force personnel describe the use of red strobe lights. Therefore “it might be concluded that, at least to the Soviets, color is a very important consideration.”

If the logic and the evidence they cite seems a little shaky to you, then you’re right. Using spotlights to blind pilots is nothing new, and there’s no evidence that the Soviets were using the strobe lights as anything more than a continuation of techniques that’d been used since World War II.

You can read the report embedded below.