An unclassified excerpt from the DIA parapsychological monograph on “Soviet Offensive Behavior” from 1972 outlines some of the Agency’s fears over reports of Soviet psychic abilities - specifically, “Telepathic Hypnosis.” The section claims that Soviets had managed to telepathically put people to sleep and wake them up from over a thousand miles away, with Kotkov, a star Soveit psychologist, able to “telepathically obliterate an experimental subject’s consciousness.” 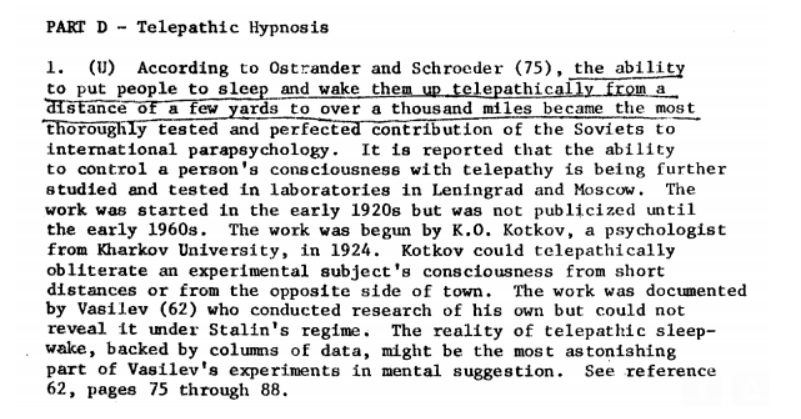 Apparently, these effects had also been documented through use of EEGs. According to the report, these EEGs showed that effects could create a complete “wake up” effect within twenty to thirty seconds of sending a telepathic signal.

If these reports were true, the DIA wondered, what is the nature of the induced sleep? Is the subject more susceptible to control or influence, could their dreams be manipulated in a telepathic version of Inception? There were worries “that this new field of telepathy will open up new avenues for spreading propaganda” and that telepathy might be amplifiable “like radio waves.”

The DIA report had no doubt that ability to create “a mental whammy” had occurred to the Soviets. Could a “whammy” cause someone to steal secrets, or sabotage equipment? In such a scenario, the DIA warned, “the mission is accomplished and the individual does not even know that he has done anything.”

The complete report, over 150 pages, will be explored in later articles. In the meantime, you can read the full excerpt below: